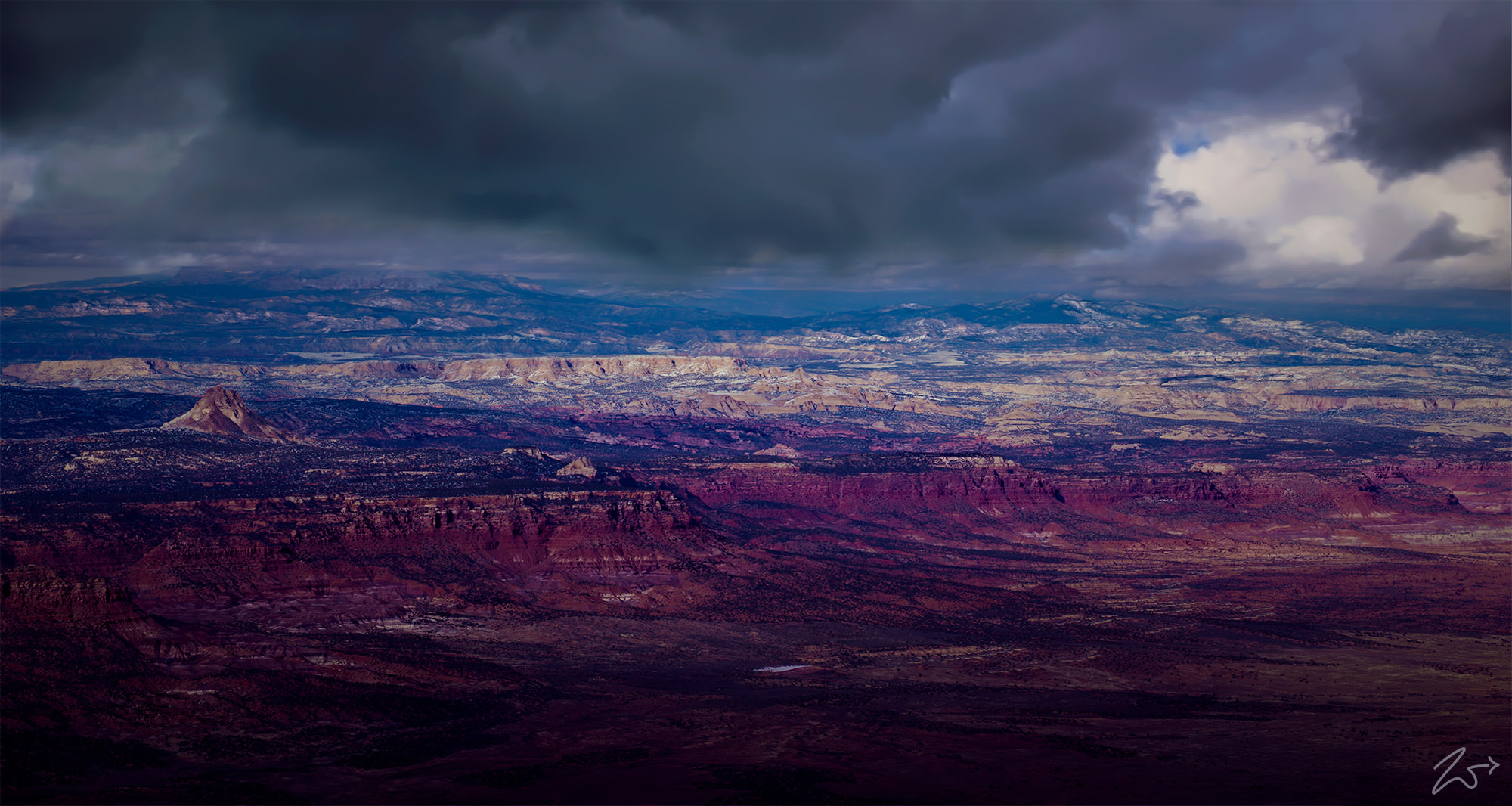 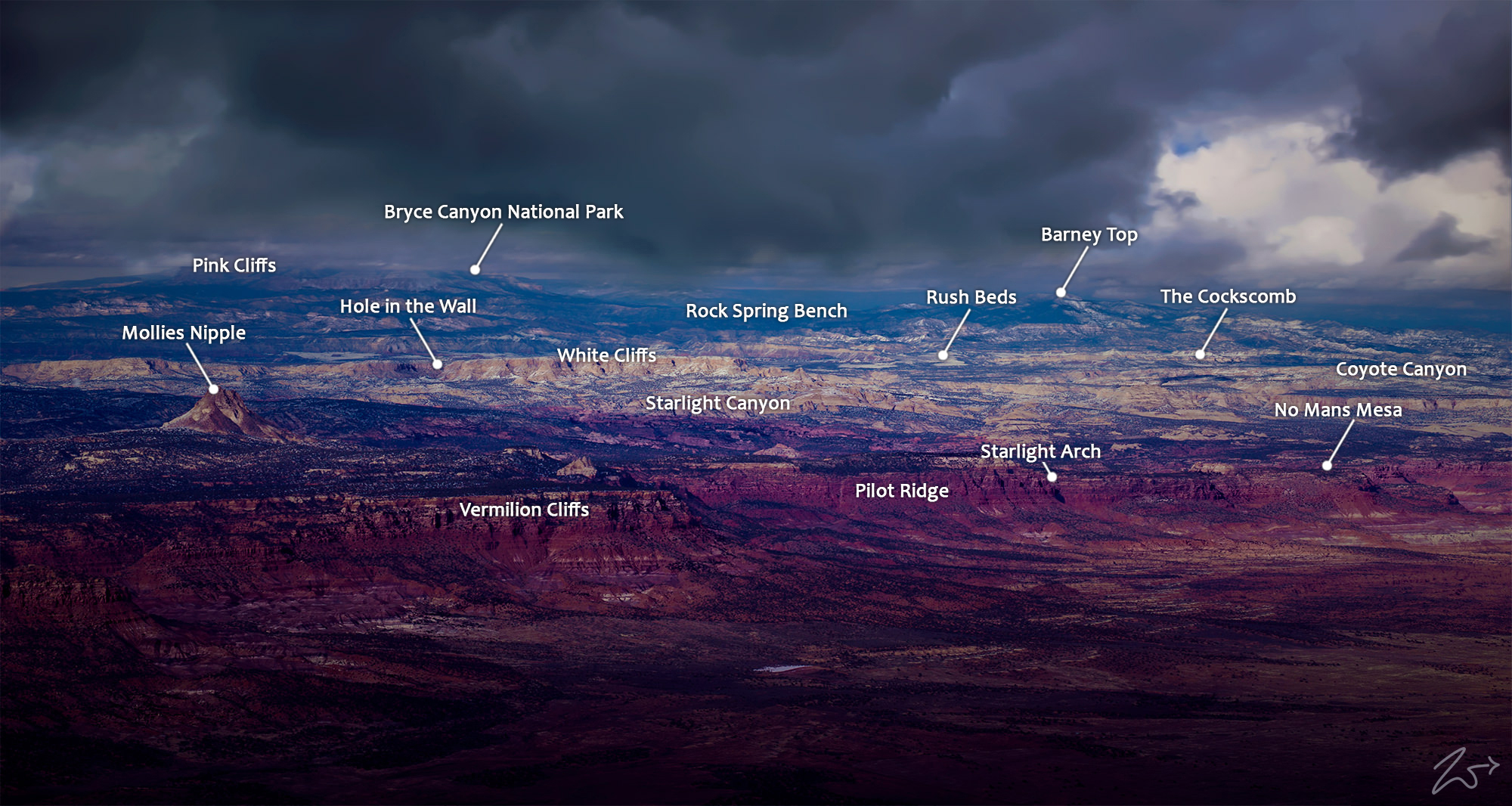 This image is called “Staircase into Clouds”. The lone peak on the left side of this image is Mollies Nipple, a name given to as many as seven peaks, at least one butte, at least one well, and some other geological features in Utah. Some say there may be eleven locations in Utah that bear this name. At least a few of those are attributed to the early pioneer John Kitchen, who named them to commemorate his wife.

Zedekiah:“I lensed this photo of the Escalante Grand Staircase National Monument whilst flying westbound, along the Vermilion Cliffs over Telegraph Flat in southern Utah. In the distance peeking out from under the clouds overlooking the staircase on the left is Powell Point and Barney Top of the Table Cliff Plateau in the Escalante Mountains. The valley to the right of the mountains is called Upper Valley and to the small mountain to the right of that is Canaan Peak. Behind the peak sitting in Potato Valley along the Escalante River is a small, beautiful western town called Escalante.”

To the right of Mollies Nipple are Starlight Canyon, Kitchen Canyon, the Pariah River, Johnson Hole, Hogeye Creek, Snake Creek, and the Upper Death Valley. Behind Mollies Nipple from left to right are the White Cliffs with Bull Valley Gorge and Rock Springs Bench. Behind the bench are the Kodachrome Basin State Reserve and small communities of Cannonville and Henrieville. In front of the bench moving further to the middle right side of the image is Hackberry Canyon, Lower Death Valley, Sam Pollack Arch, Rush Beds, The Cockscomb and Cads Crotch and on the far right is Horse Flat.

In the image below we are looking north into the Moccasin Mountains, an 11-mile-long (18 km) mountain range that sits between Zion National Park and Bryce Canyon National Park on the First Nations Kaibab Native Reservation. Peeking out underneath the clouds we can see the bright cliffs of the Coral Pink Sand Dunes State Park. 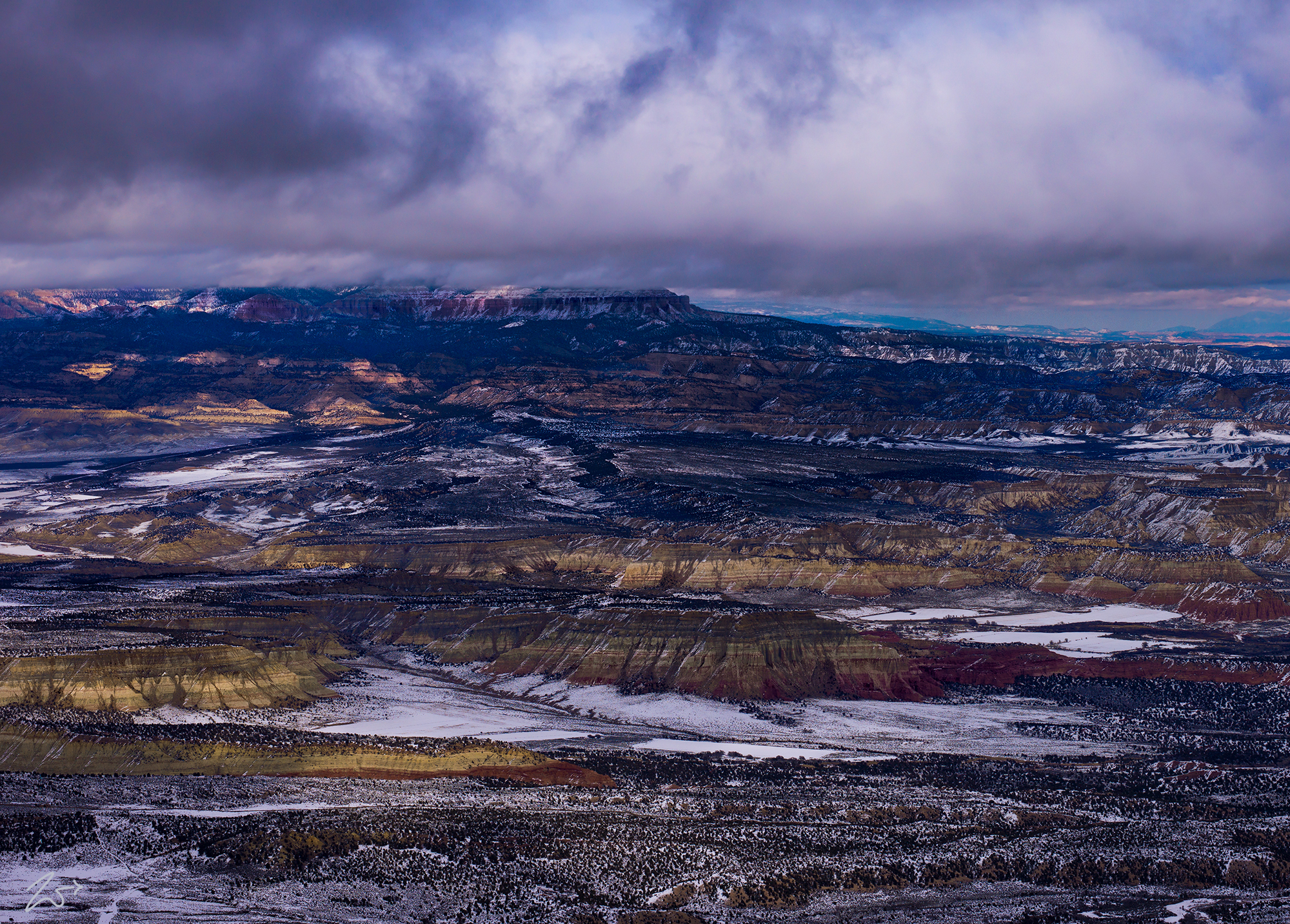 In the 1870s, geologist Clarence Dutton first conceptualized the large geological region that covers most of southern Utah as a huge stairway ascending out of the bottom of the Grand Canyon and spreading northward.

Dutton divided his geological layer cake explanation of Earth history into five steps from the youngest (uppermost) rocks with the cliff edge of each layer forming giant steps; Chocolate Cliffs, Vermilion Cliffs, White Cliffs, Grey Cliffs and finally the Pink Cliffs of Bryce Canyon which you can see at the top of this image.

Below, these different layers are clearly seen across a vast distance in this image from above Wolf Knoll on the Paria Plateau.  In the foreground are the Coyote Buttes, followed by the Coyote Valley and the Kaibab Plateau. In the distance are the Shinarump Cliffs, followed by the Vermilion Cliffs, then the White Cliffs, and finally the Pink Cliffs of Bryce Canyon National Park on the horizon. 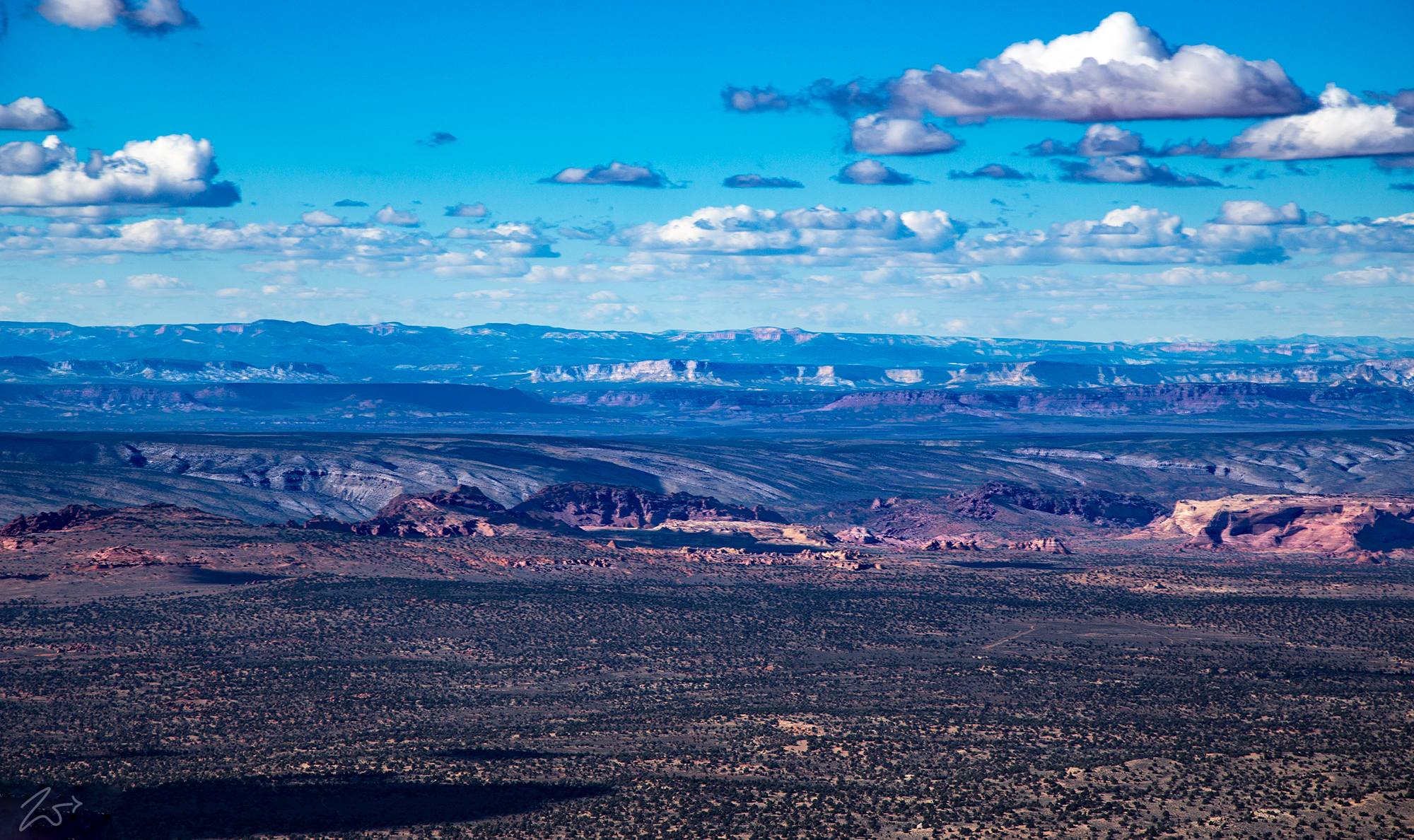 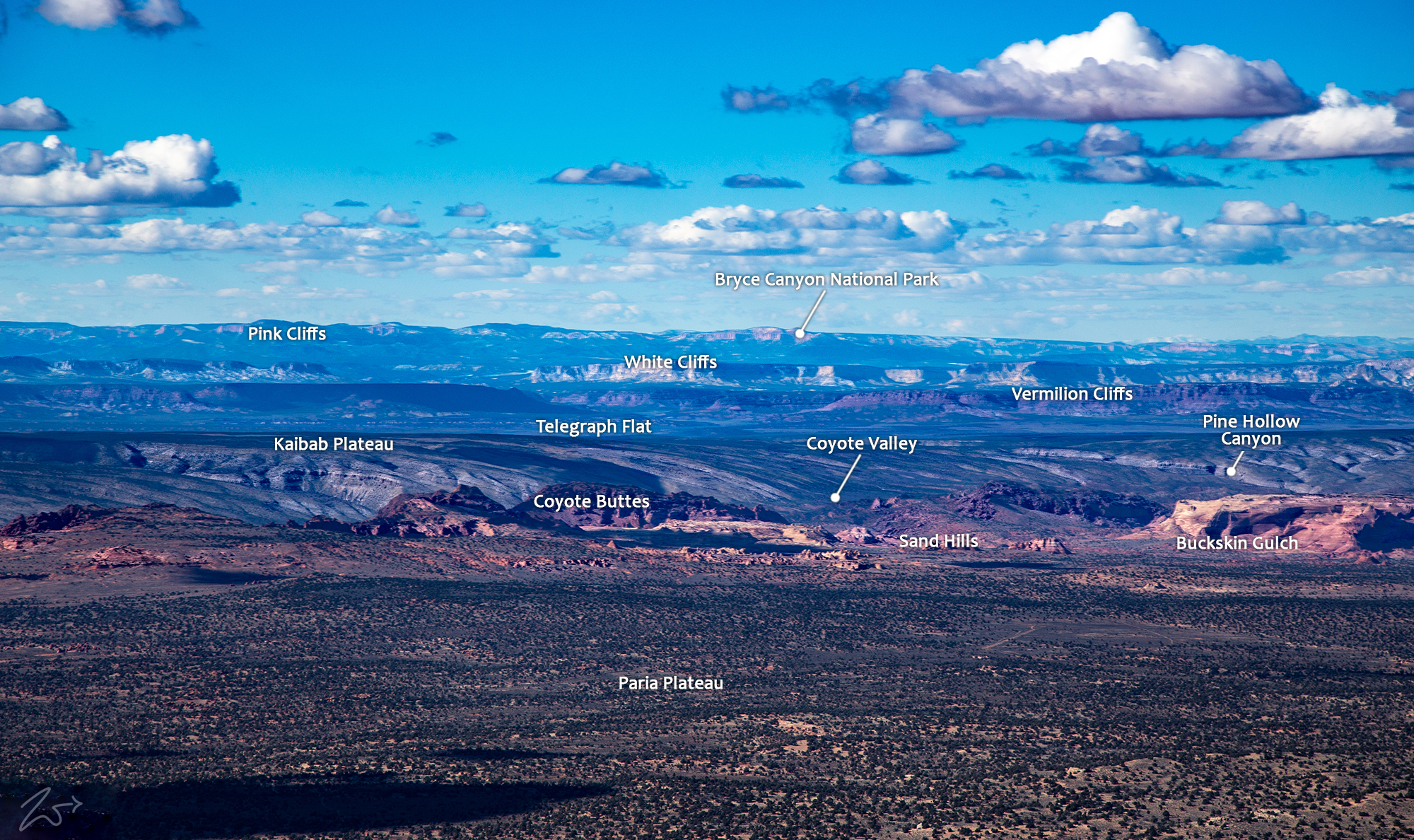 The Chocolate Cliffs are located all throughout the Grand Canyon, then as you move northward across the Kanab Plateau and down into the basin you find the reddish-hued Vermilion Cliffs that run along the lower part of the Staircase from the lower edge of Zion National Park all the way across to the Paria River where it flows into Cottonwood Creek in what is known as the Cockscomb Monocline. 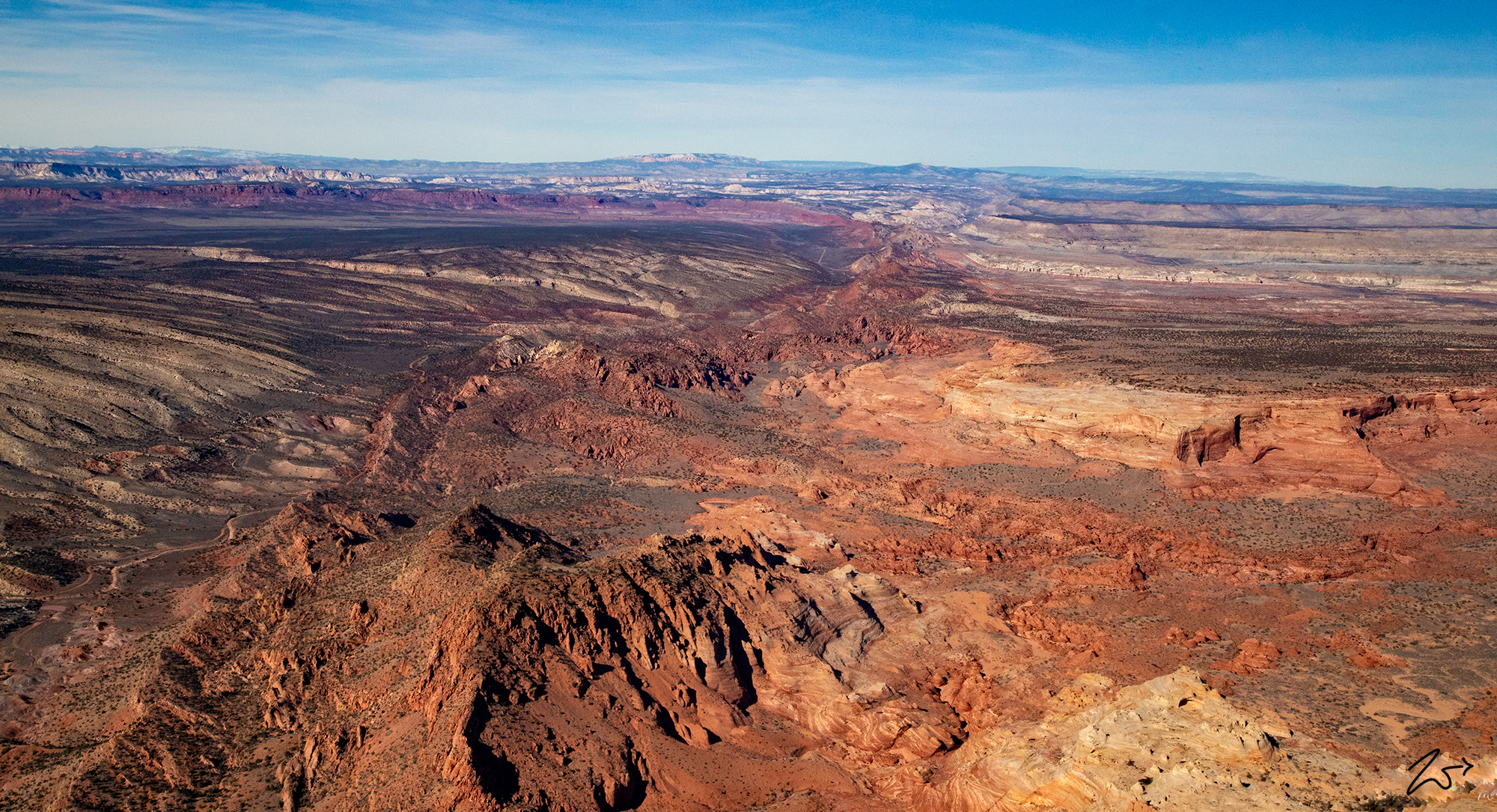 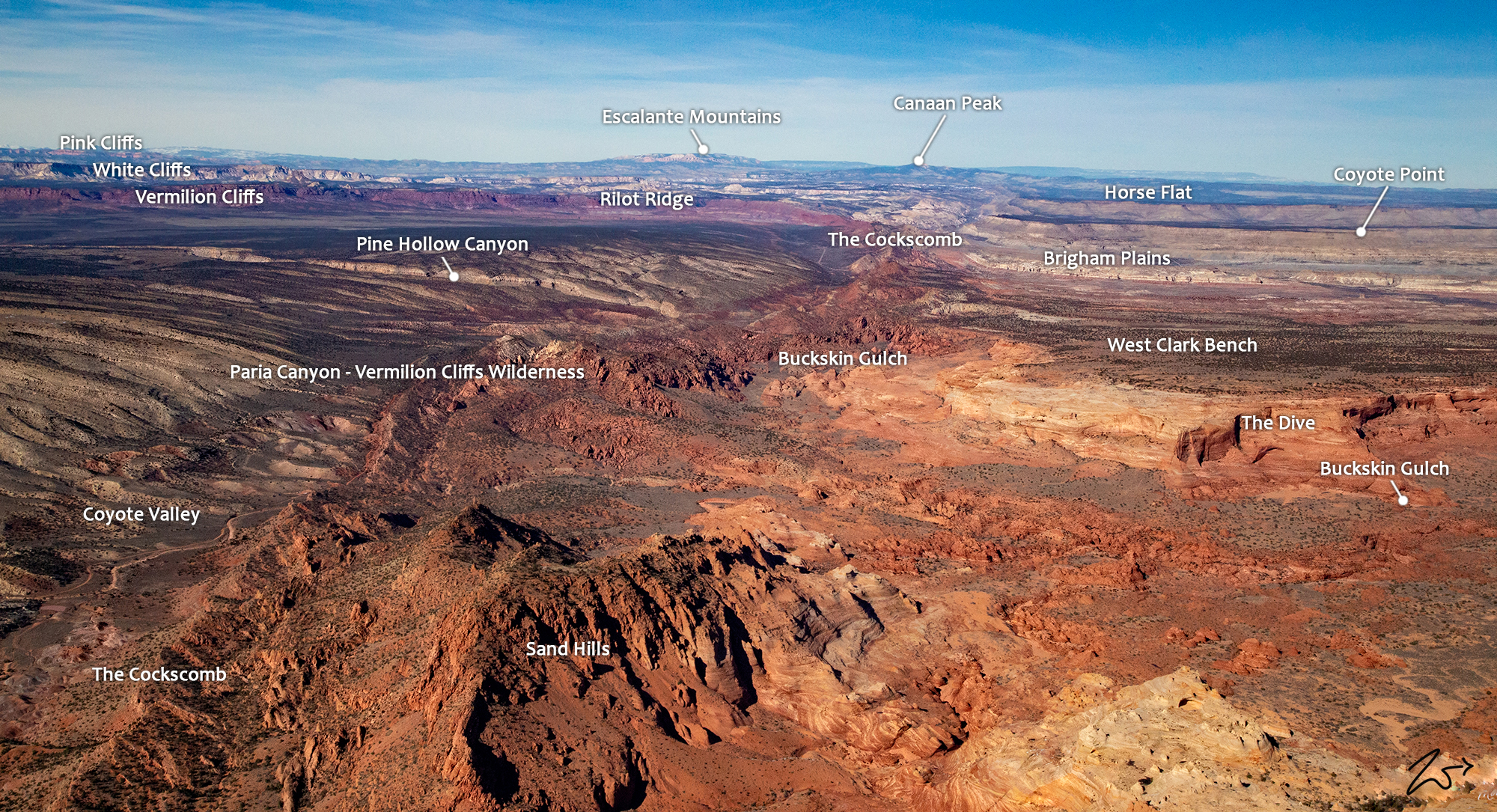 The Vermilion Cliffs wrap around into the Cockscomb Monocline in the middle of the image above. Viewing north from the Paria Plateau above Coyote Butte. Buckskin Mountain is the large dark flat area on the left and on the right middle side, the White Rimrocks become Nipple Bench. And on the distant horizon in the middle of the image are the Escalante Mountains. The state border between Utah (top) and Arizona runs horizontally about midway in the image. 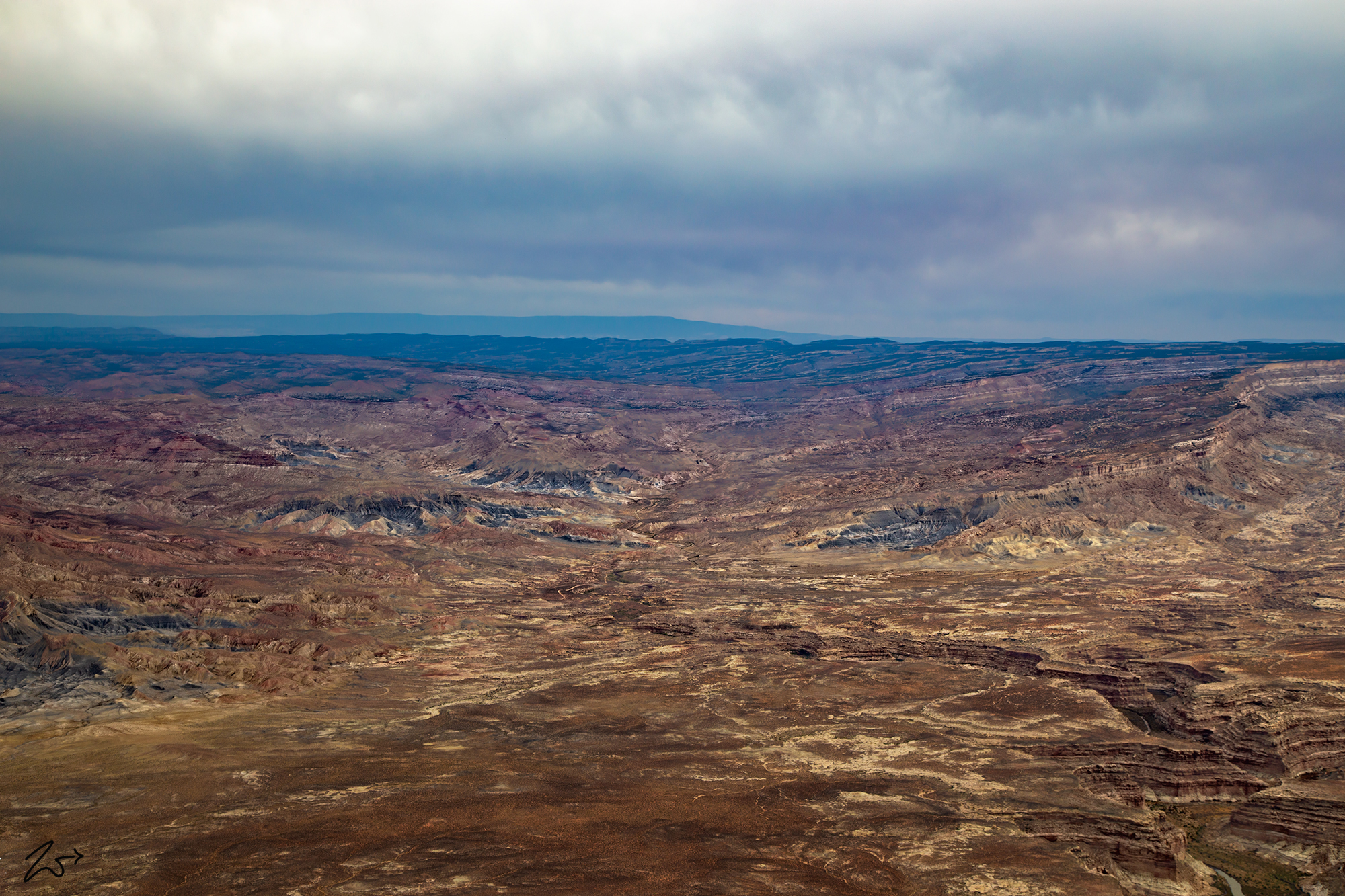 In the image above, Last Chance Creek snakes its way circuitously cutting down through the multiple layers of the Escalante Grand Staircase. Escalante Canyon in the very middle top of this image, where the entire landscape sinks down across the landscape. Last Chance Creek finally reaches the edge of Lake Powell in the bottom right side of the picture.

In this image below, Last Chance Bay sits on the edge of Lake Powell. Last Chance Creek begins high up above in the Escalante Canyon in the distance. It winds down through miles of jumbled twists and turns before it reaches Lake Powell. In the distance is Paradise Bench and Horse Mountain and the Kaiparowet Plateau. 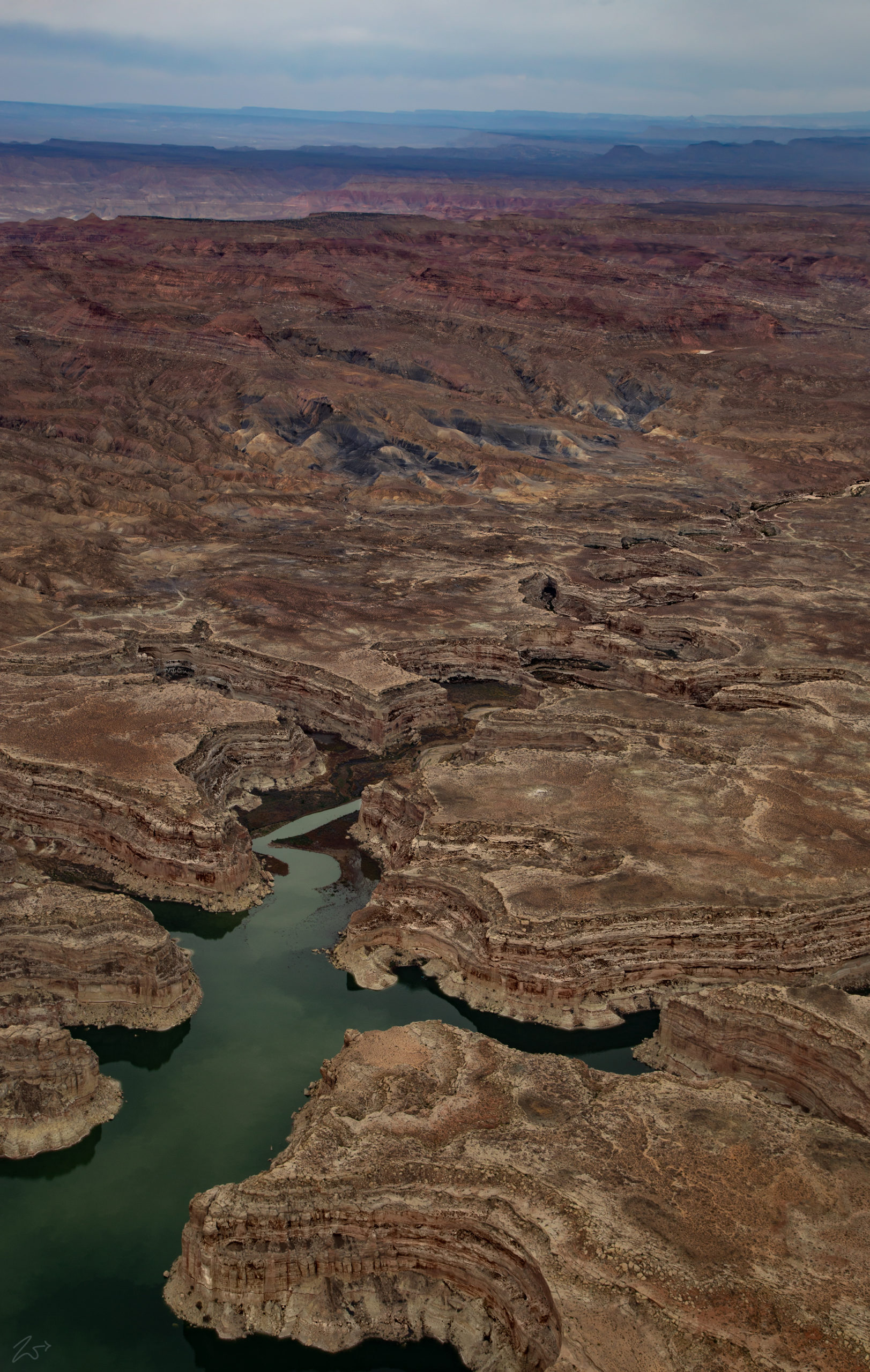 In this image below, this is looking east into Glenn Canyon National Recreation Area across the deep slotted canyons above the Escalante River and the twisting floor of Moodys Canyon in the foreground. On the horizon lays South Summit Ridge on the left, Mount Pennell in the middle and Mount Hillers on the right. 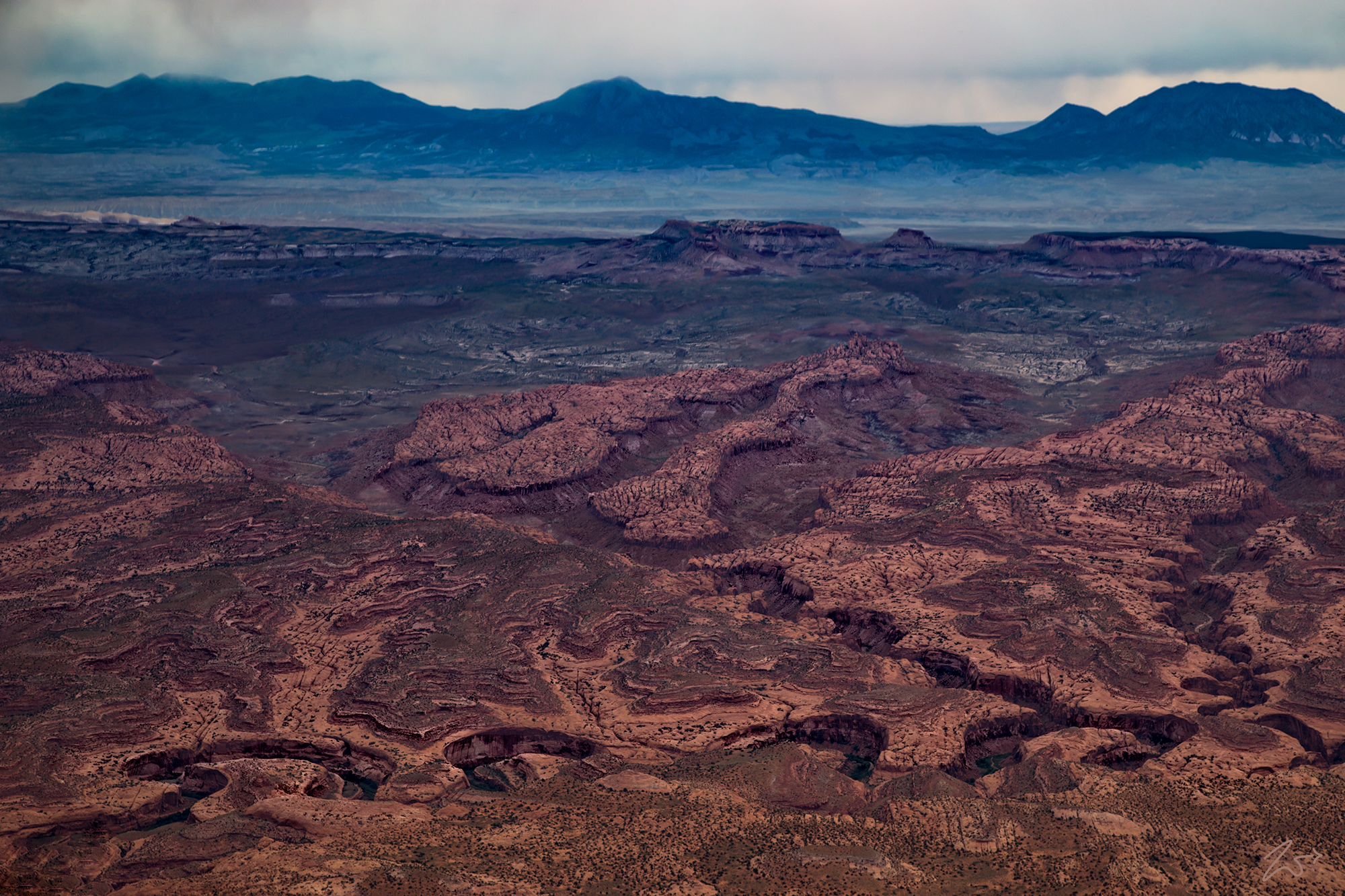 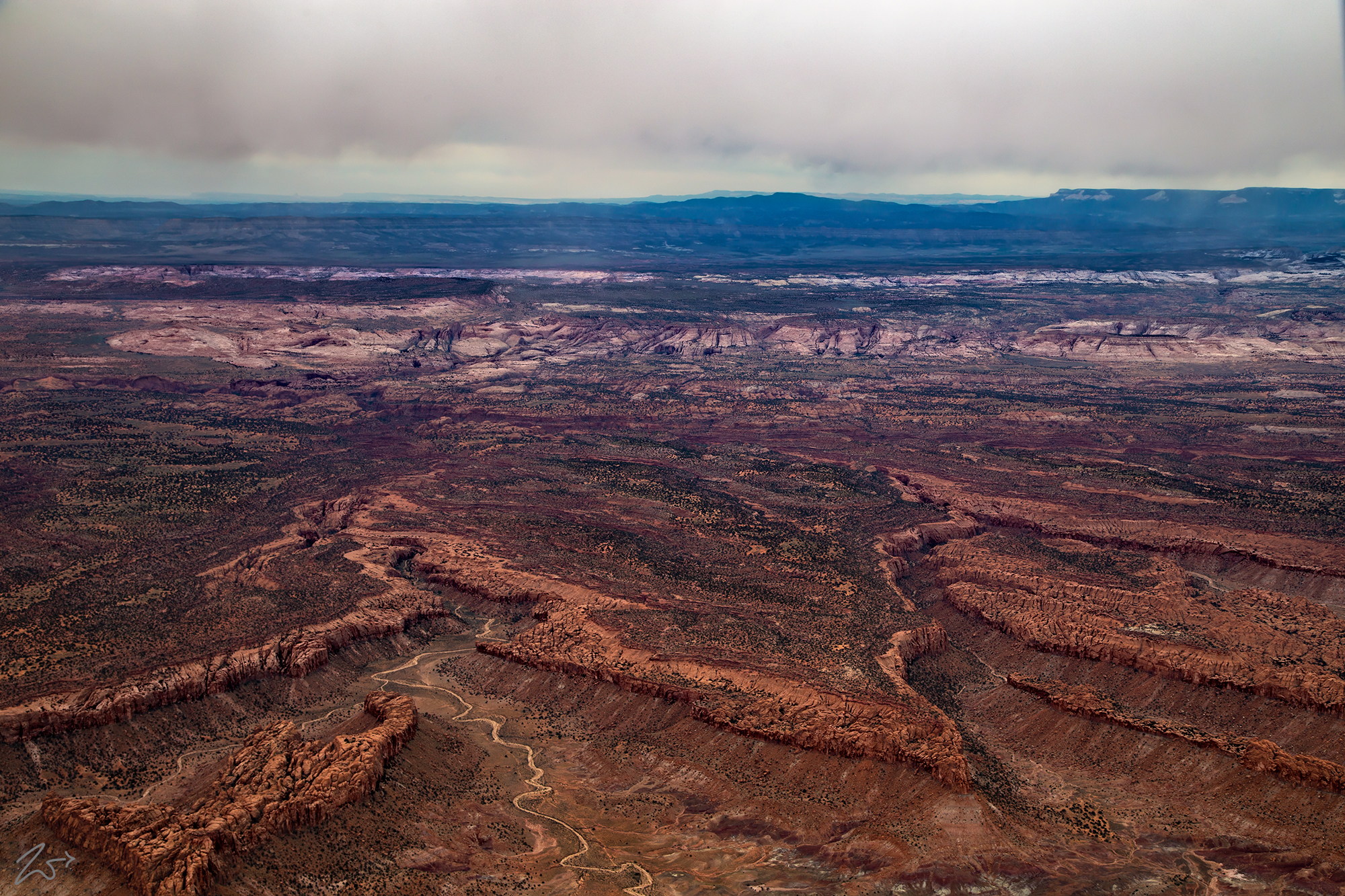 In the foreground of the image above, Little Bown Bench (middle) and Wolverine Bench on the right sit above the Wolverine Petrified Wood Natual Area. The dry creek bed in the bottom left leads into Death Hollow and in the upper middle part of this image, the jumbled white rocks mark the path the Escalante River takes as it cuts through Brigham Tea Bench with its green valleys, golden flowers and thick clusters of pinion pine. 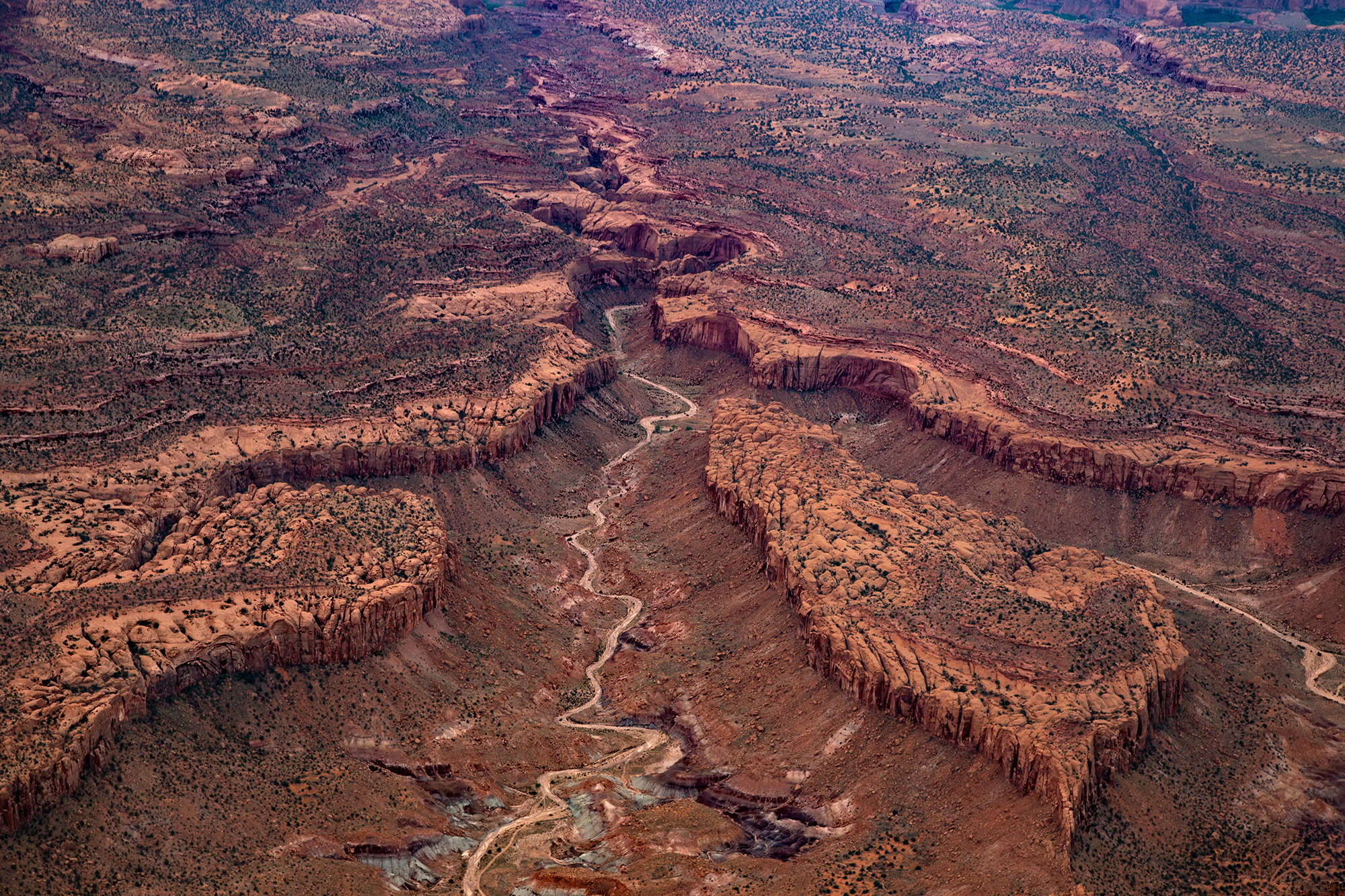 This area has a long and dignified human history going back many millennia: it is a place where one can easily see how nature shaped human endeavors throughout the American West, a place where distance and aridity fight a hard battle against dreams, courage and pure tenacity.