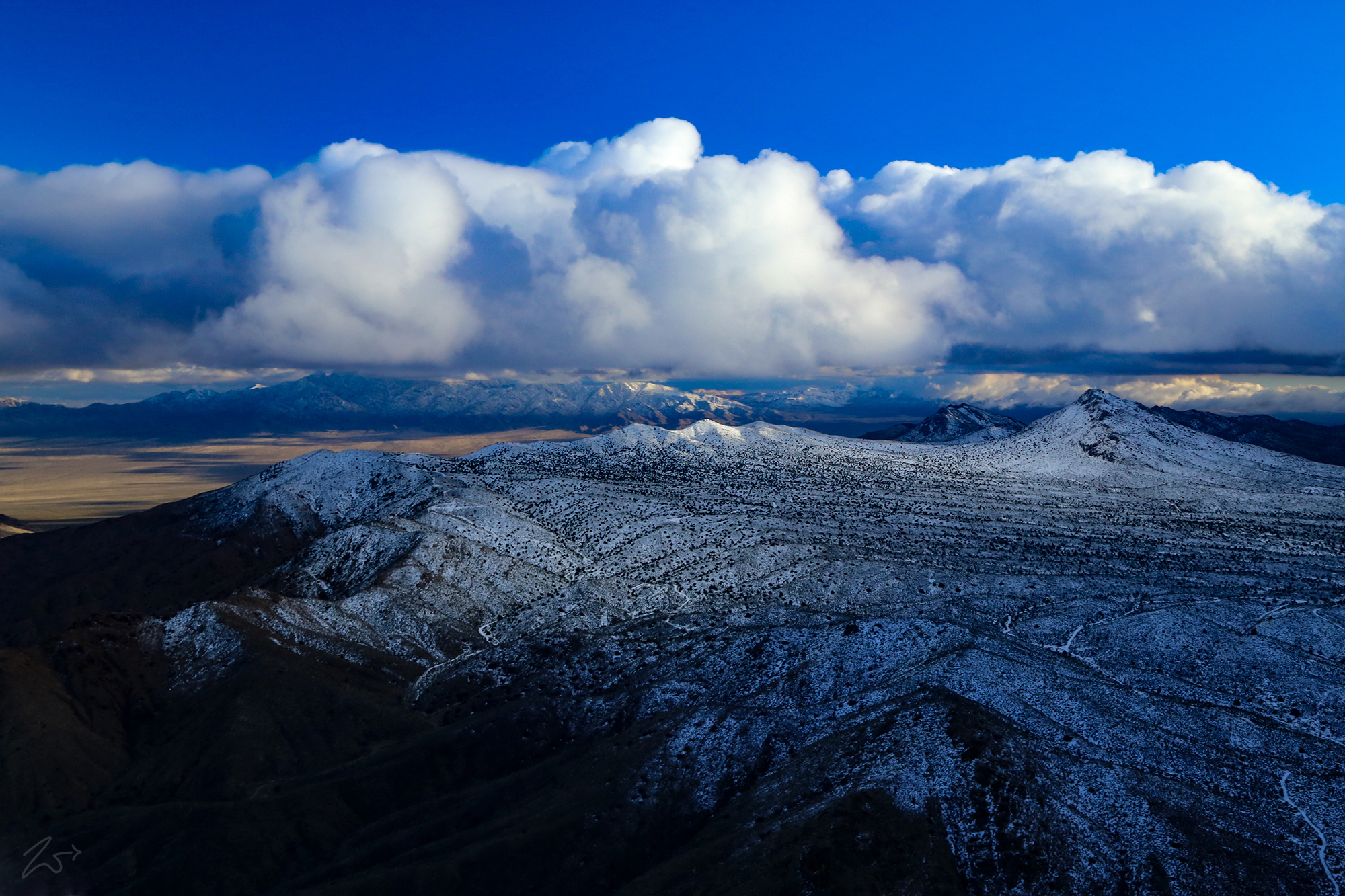 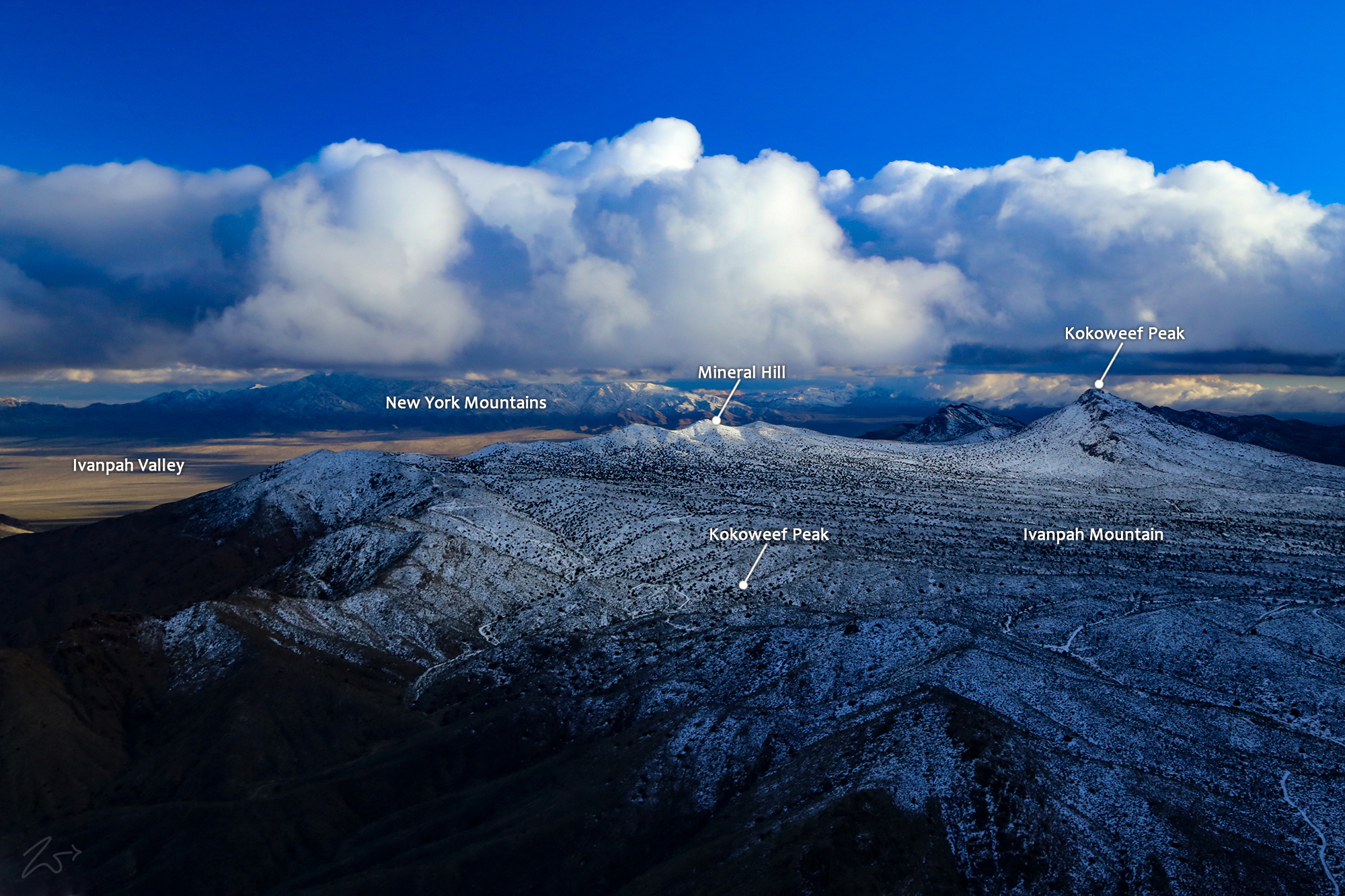 This is the mysterious and somewhat infamous Kokoweef Mountain, a 6,037ft / 1,840m peak situated three miles south of the Mountain Pass in California and about 19 miles west of the Nevada state line. Kokoweef Peak is covered by verdant Joshua tree woodland and has played a central role in an ongoing 80-year-long search for a mythical black-sand gold-laden deposit.Zedekiah: “I shot this image in the winter after a snowstorm has dusted the mountains at higher elevation along the Mojave Desert south of the California / Nevada border. I was flying southbound and shooting to the east.”

The Storied History of Dorr’s Goldmine

In the 1920s a miner named E. P. Dorr explored a cave high up the side of Kokoweef Peak. Later, in his sworn affidavit, he reported an amazing discovery – and a lost mine legend was born. Dorr claimed that deep under Kokoweef Peak, he found a swiftly flowing subterranean river; lining its banks were black sands rich in gold. The legend grew as “facts” became scarce or convoluted. The cave entrance was dynamited shut…and there are stories of Dorr going insane, of multiple men murdered or buried alive, and the allure of rich treasures deep beneath the mountain along an underground river.
This is from Dorr’s affidavit:
“On the floor of the canyon, there is a flowing river which by careful examination and measurement (by triangulation) we estimated to be about 300 feet wide and with considerable depth. The river rises and falls the tides of the sea—at high tide, being approximately 300 feet wide, and at low tide, approximately 10 feet wide and four feet deep. When the tide is out there is exposure on both sides of the river from 100 to 150 feet of black beach sand which is very rich in gold value. The sands are from 4 to 11 feet deep…We explored the ledge sands for a distance of more than eight miles, finding little variation in the depth and width of the sands.
One stalactite, the largest seen, is 27 feet in diameter and hangs 1,510 feet down into a 3000-foot canyon. This great stalactite is perpetually washed by water flowing over it and falling into the dark canyon depths. The huge glistening white crystal is 500 feet longer than the Eiffel Tower, and challenged us with amazement and wonder.”
You can see why this would cause a ruckus! And many years of difficulty followed by the ebb and flow of prospectors tussling back and forth over mining rights and ownership. Now it is off-limits and the curious are not welcome and are chased away from accessing the mines.
Although Kokoweef has not yet yielded the much-advertised river of gold, it has offered a veritable paleontological treasure of Pleistocene-age animal remains including brush ox, dire wolves, large and small camels, horses, marmots, bats, shrews, and birds.
Kokoweef Peak is composed of Mississippian and Pennsylvanian limestone and riddled with numerous caves and caverns which are slowly being formed by the acidic rainwater, snowmelt, and percolating groundwater that has carved through the limestone since time immemorial. These waters dissolving the limestone follow fissures along faults from the late Mesozoic age and through the limestone formations are between 340-300 million years old, the actual dissolution that formed the caverns started much later, probably in the Ice Age, a million years ago.
In this photo, the peak is the prominence to the right with the zig-zag rick pattern going up its spine. To the left, you can see where the snow has melted at lower elevations. The valley in the Distance is Ivanpah and Primm, Nevada to the left of the valley in the distance.
If you drive on I-15 from California to Las Vegas you go right by Kokoweef as you descend into the valley near state-line and Primm. Kokoweef is on the right and there is a small sign indicating such. 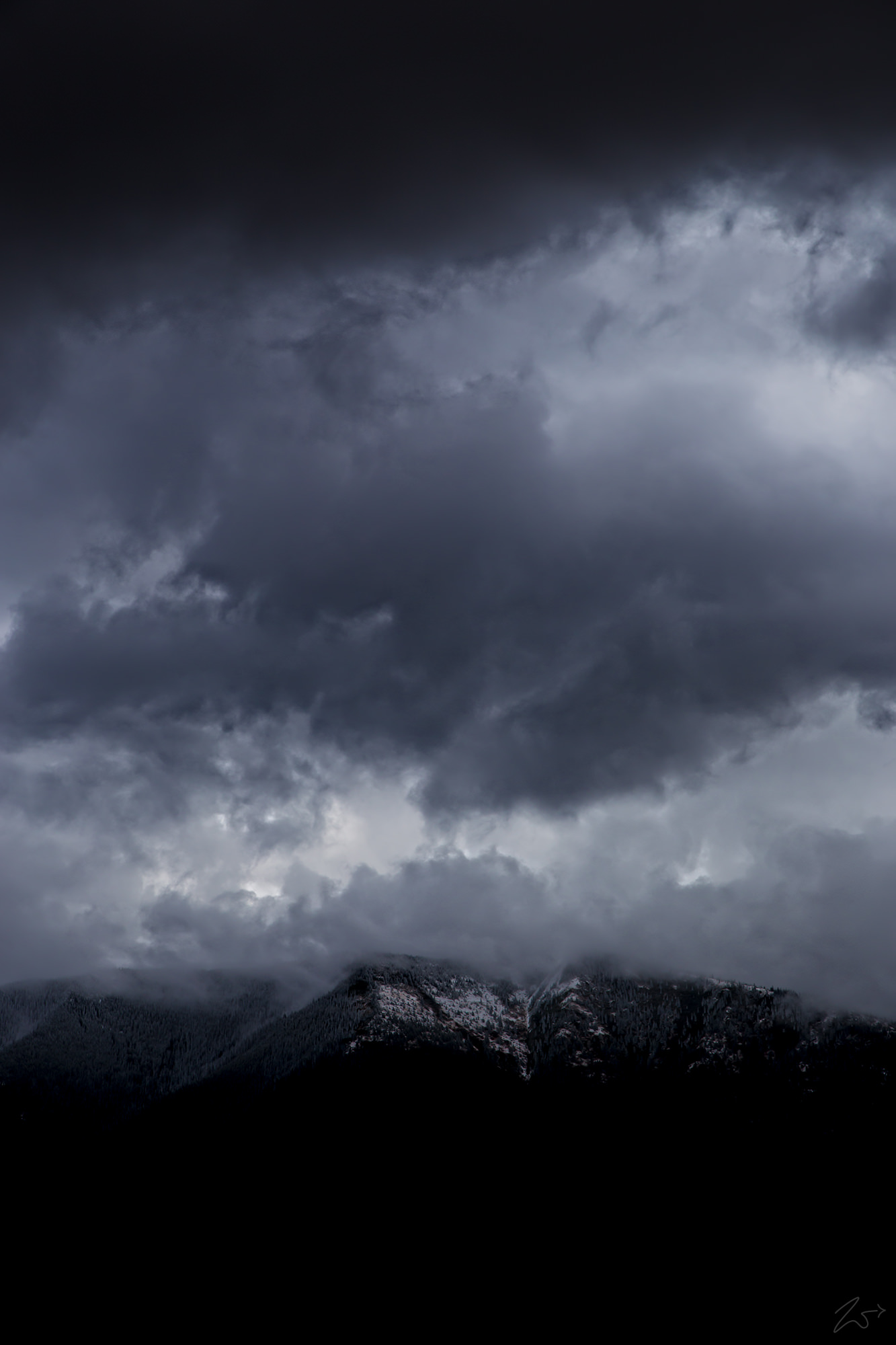