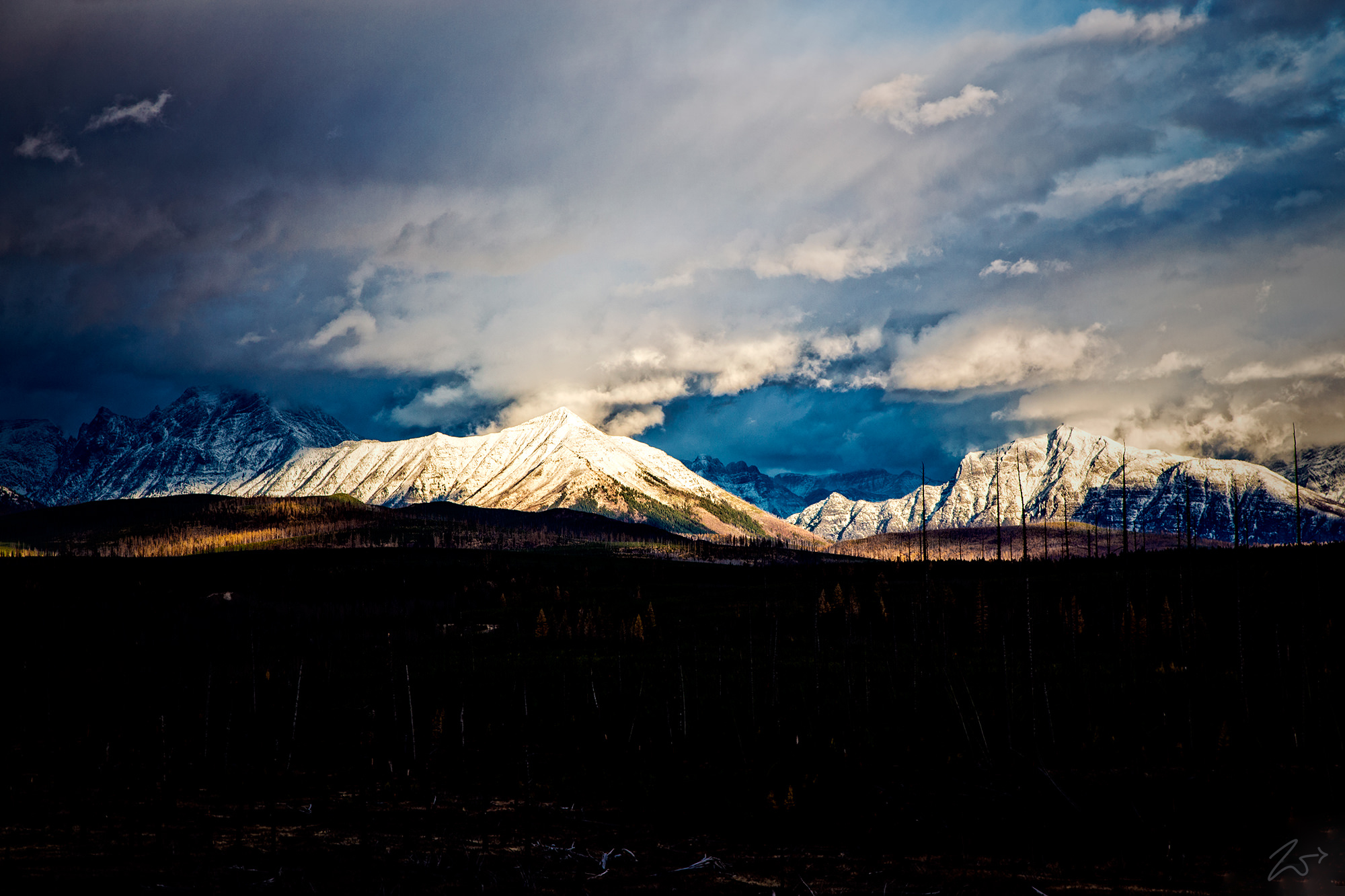 The rough cliff-faced peak on the right side of the image above is Mount Brown and tracing to the left, Bearhat Mountain rises in the dark skies in the background. Coming further left you can see a soft glowing halo burst of light reflecting off high snow-covered peaks (Zedekiah calls these atmospheric effects ‘Sun Bursts“) are caused when the late afternoon sunlight brilliantly illuminates the already bright white snow and the reflection lits up the surrounding water vapor in the immediate vicinity.

The Peak on the left is Stanton Mountain and following the ridge to the left is Mount Vaught and behind it towering into the clouds looms the aptly named Heavens Peak. These are all part of the Livingston Range, a 36 mile (58 km) long that is 28 miles (45 km) wide. Primarily located in Glacier National park both in Montana and Canada, this ragged beautiful range has over 15 summits exceeding 9,000 ft (2,700 m) with the highest being Kintla Peak at 10,101 feet (3,079 m).

The same effect is occurring on the right side of the image below, this is Curelean Ridge while the valley to the left is where the stunningly beautiful Bowman Lake is. Further to the left is Numa Peak and Numa Ridge. 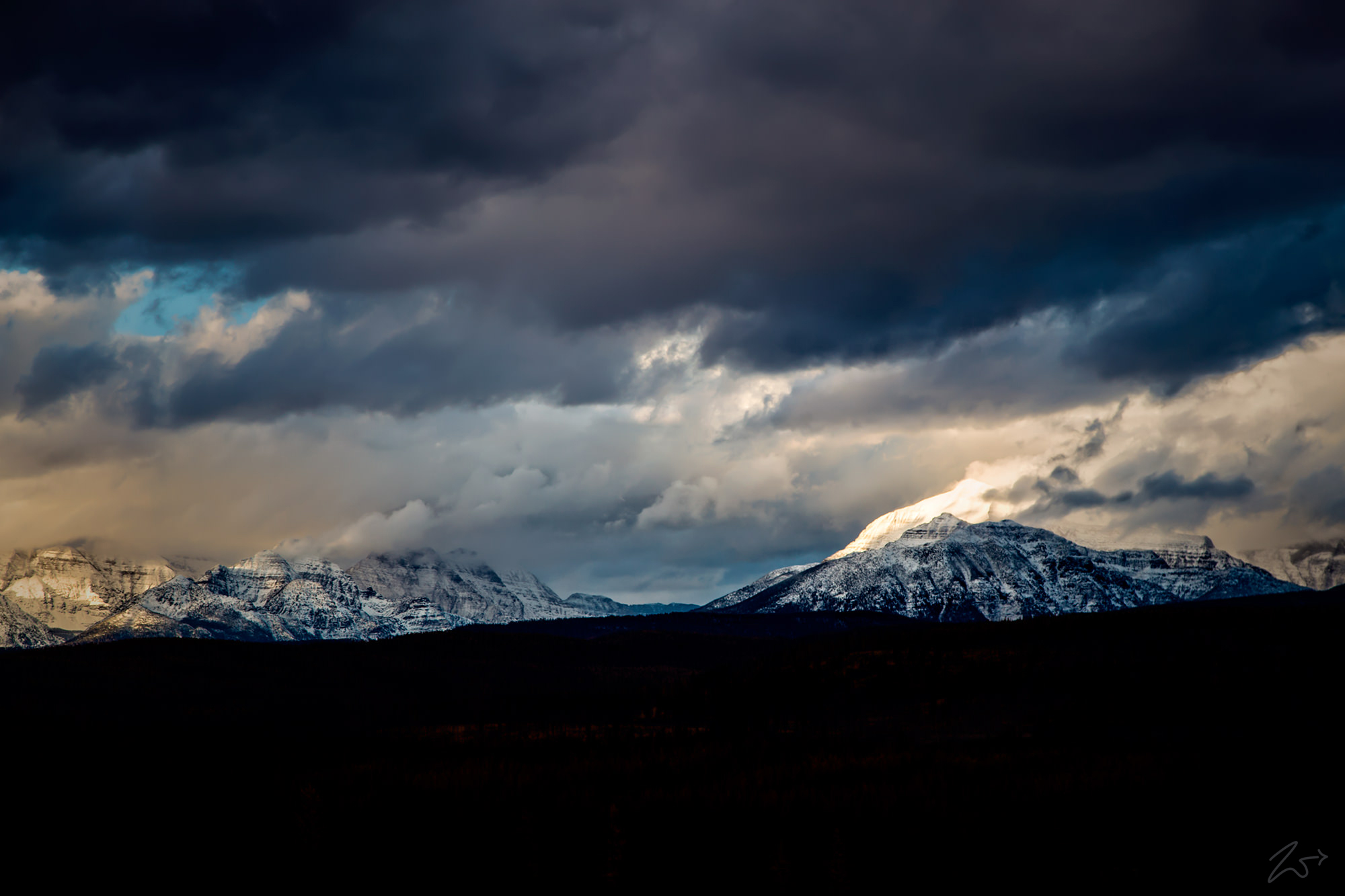 The Livingston Range is ancient, it was initially formed by uplifting forces starting 170 million years ago when the Lewis Overthrust fault pushed an enormous slap of Precambrian rocks that was 3 mi (4.8 km) thick, 50 miles (80 km) wide and 160 miles (260 km) long over newer rocks of the Cretaceous period. 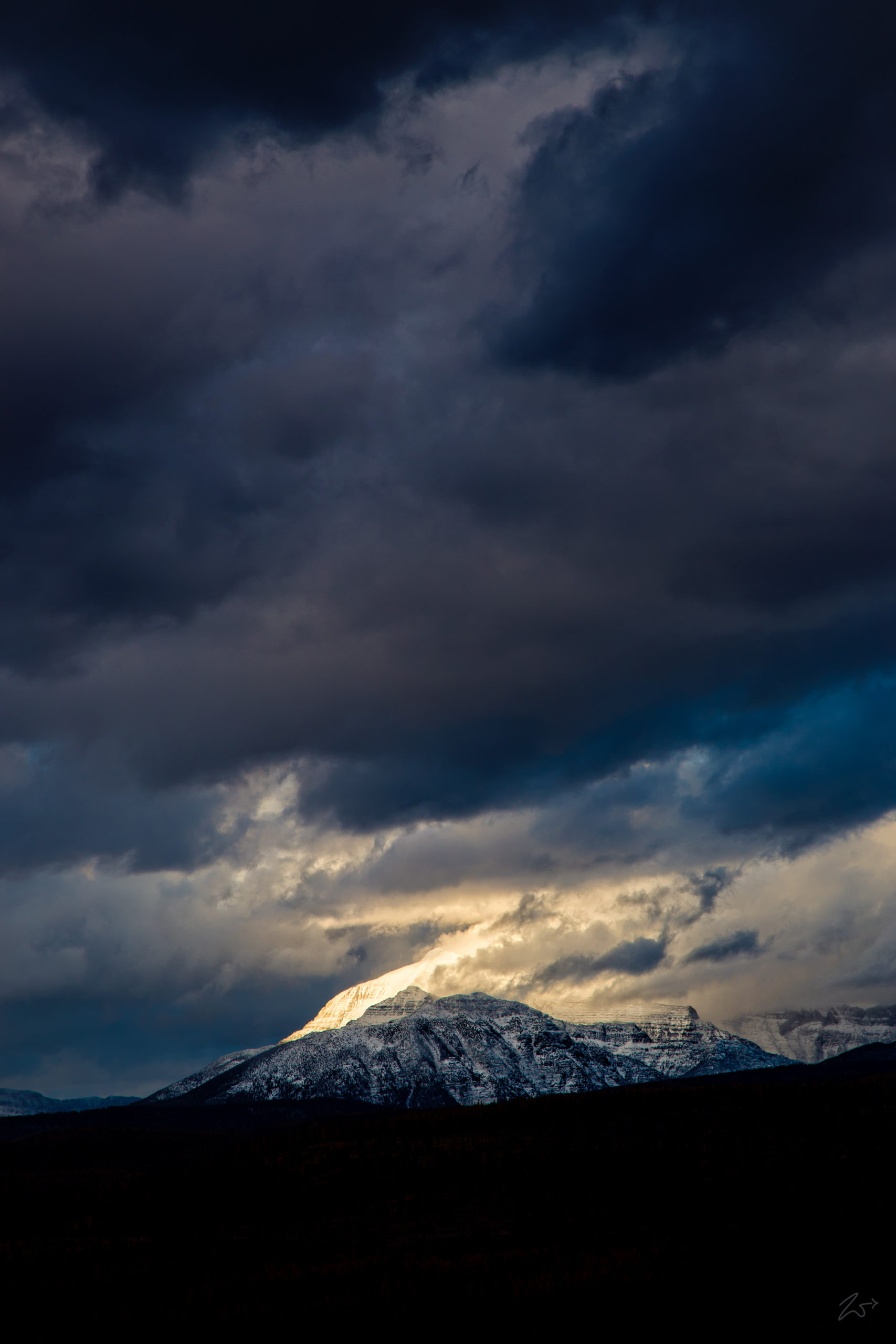 Rainbow Peak seems as though clouds of bright light are pouring up out of the mountaintop, silhouetting the pyramid-shaped Square Peak and the rugged cliffs of Cerulean Ridge. This is the home of the Rainbow Glacier, situated immediately behind this bright billowing cloud of light at an elevation between 8,500 feet (2,600 m) and 8,000 feet (2,400 m) above sea level. Rainbow Glacier covers an area of approximately 287 acres (1.16 km2) and has visible crevasses large enough able to see from space. This glacier has shown much less retreat compared to other glaciers in Glacier National Park with just over 9 percent of its surface area retreating between 1966 and 2005. 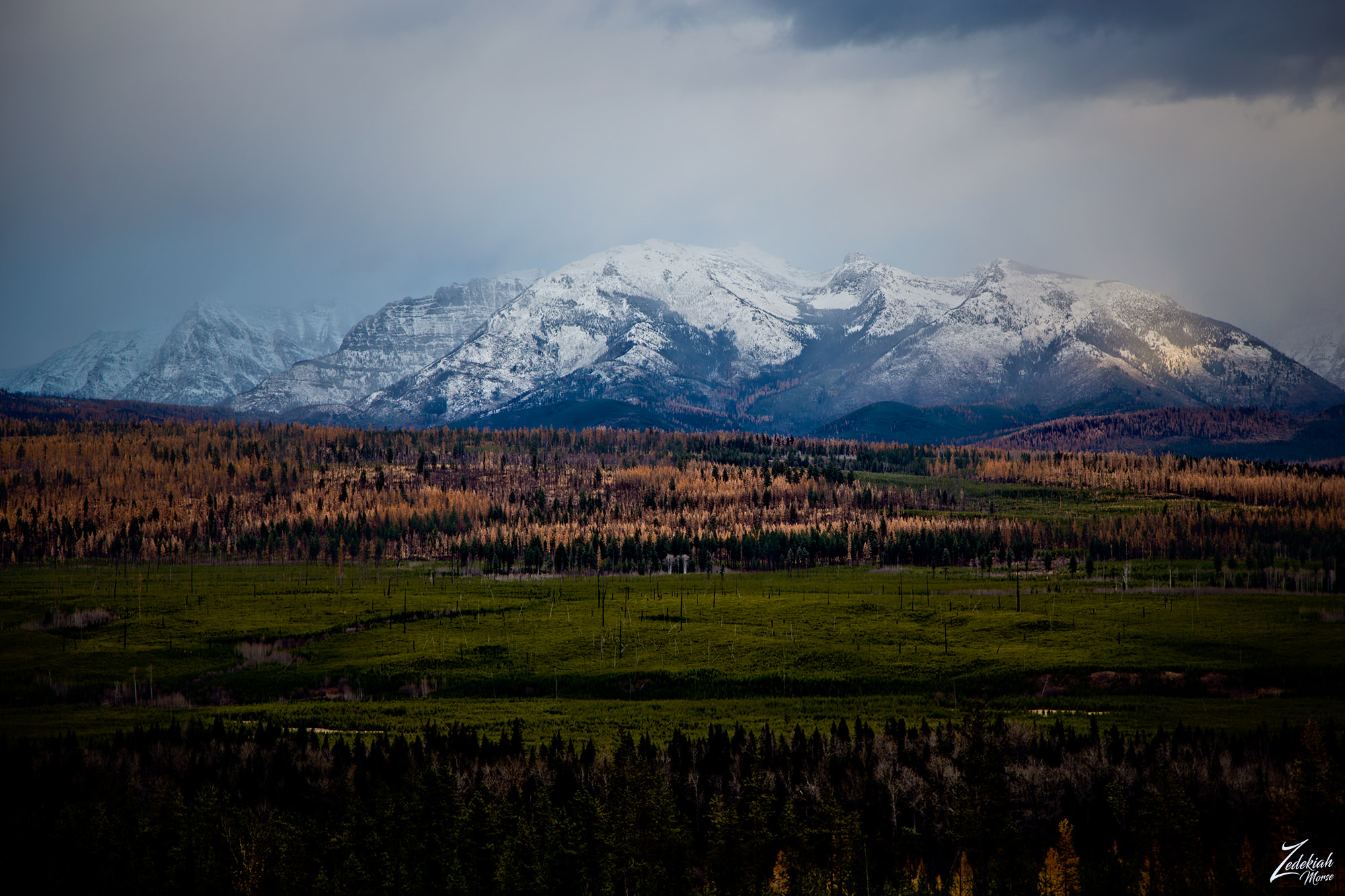 Above, from the far left is Anaconda Peak in the top background and then the jagged raw cliffs and huge snowcapped mass of Wolfgun Mountain. Continuing to the right, the first sharp peak is Longfellow Peak.  The last peak on the right of this mountain is named Paul Bunyans Cabin because it looks like a log cabin from up close. 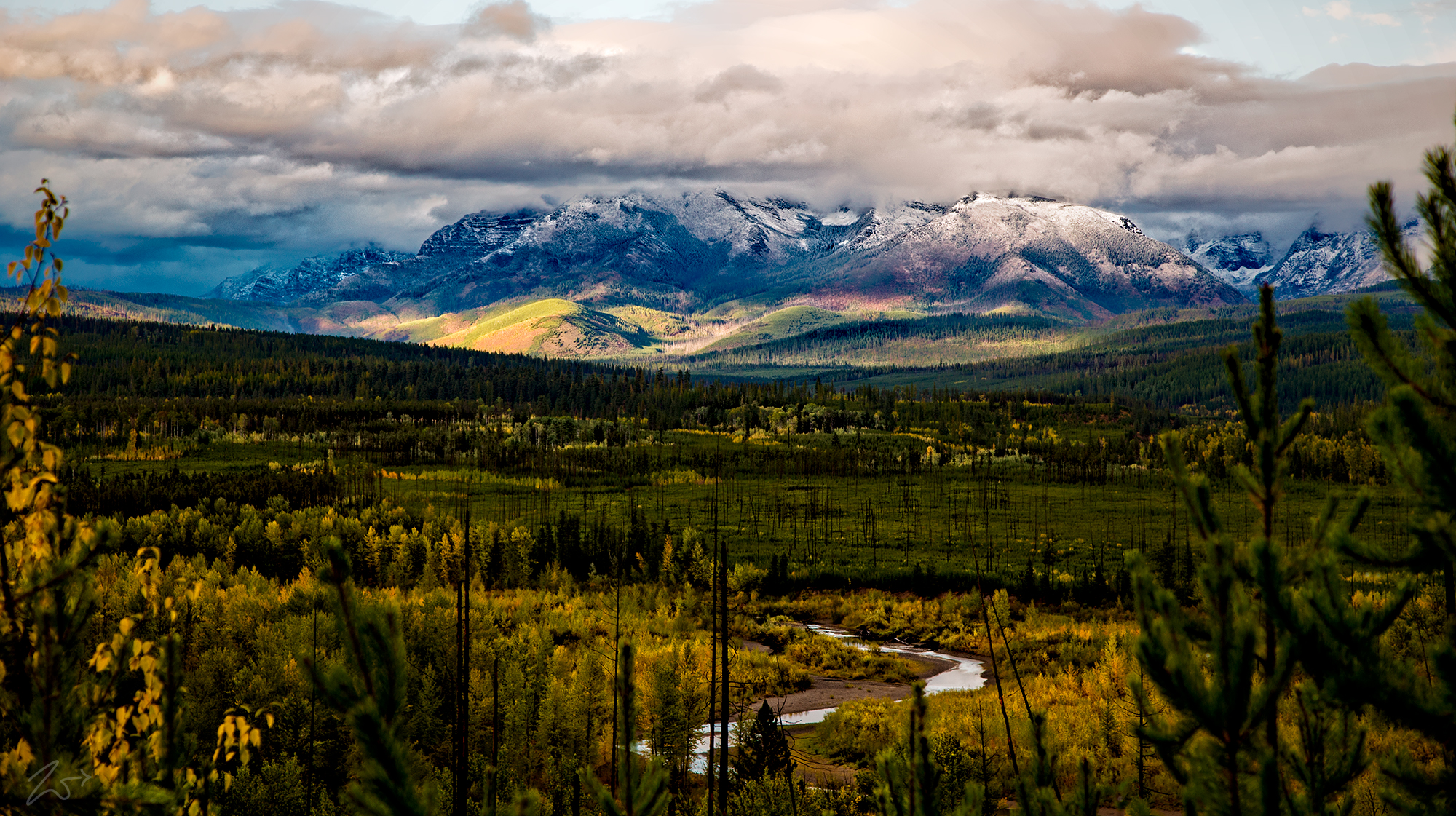 Above, Loggin Mountain towers above Sullivan Meadow in the foreground which runs along the eastern side of the North Fork Flathead River seen here winding between Logging Creek and Anaconda Creek about 3 miles (4.8 k) to the south. 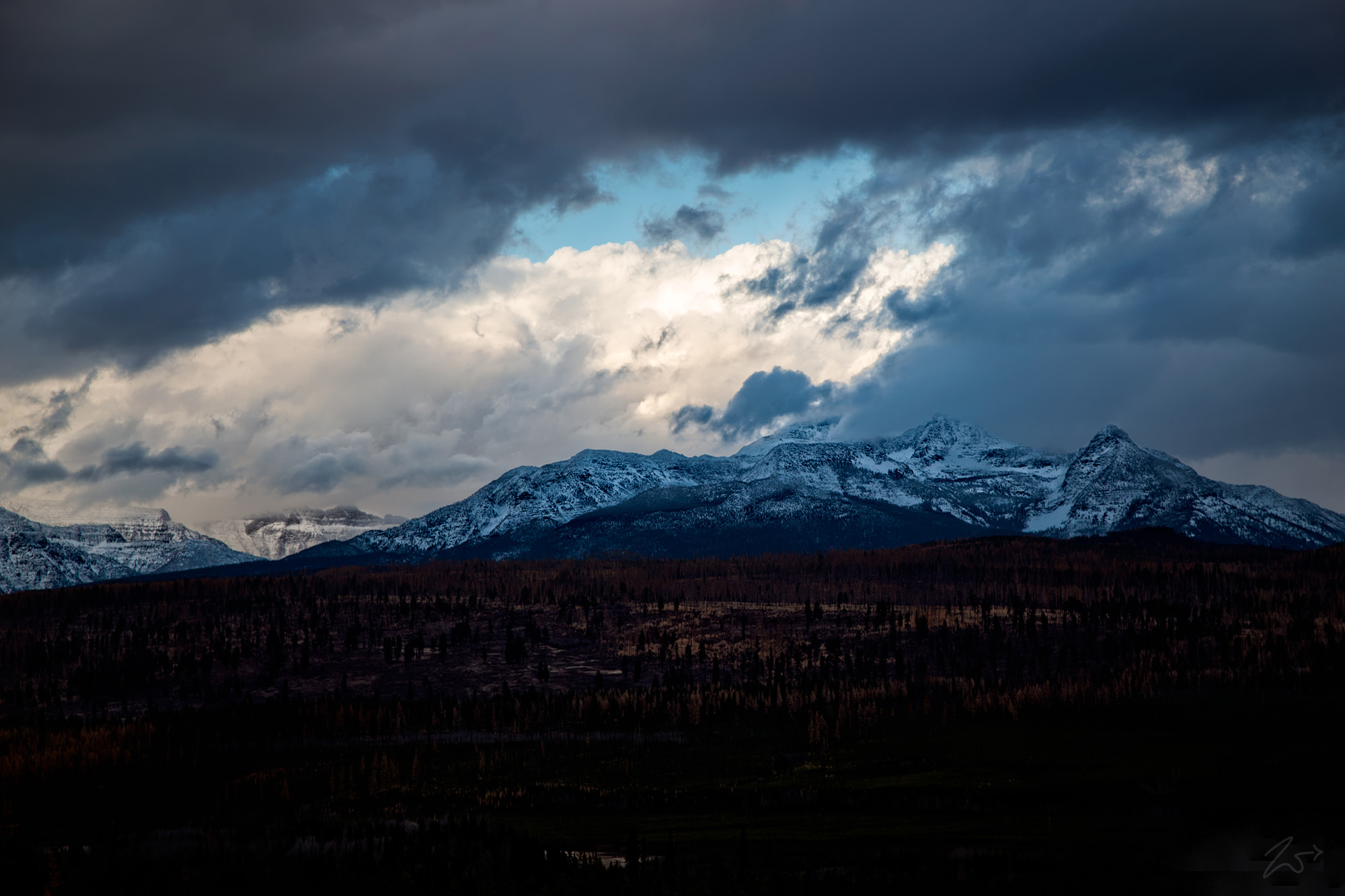 Above is Logging Mountain with Vulture Peak up top. On the western side of Vulture Peak lies Vulture Glacier and on the eastern side is TwoOcean Glacier. In the valley on the left side of Logging Mountain is Quartz Lake while Rainbow Glacier and Cerulean Lake are up on the ridge in the background. In this image below Starvation Ridge and the Boundary Mountains are the small mountains on the far left side of the image. This is the border between Canada to the left and Montana to the right. The large mountains in the middle are from the left Parke Peak, Reuter Peak, and Numa Ridge.

To view a large panoramic image of the entire Livingston Range from the Canadian border south to the Lewis Range and beyond please Go Here. Be sure to scroll the image to the left and right for the full view and scroll to the bottom of the page to see the names of the various locations.