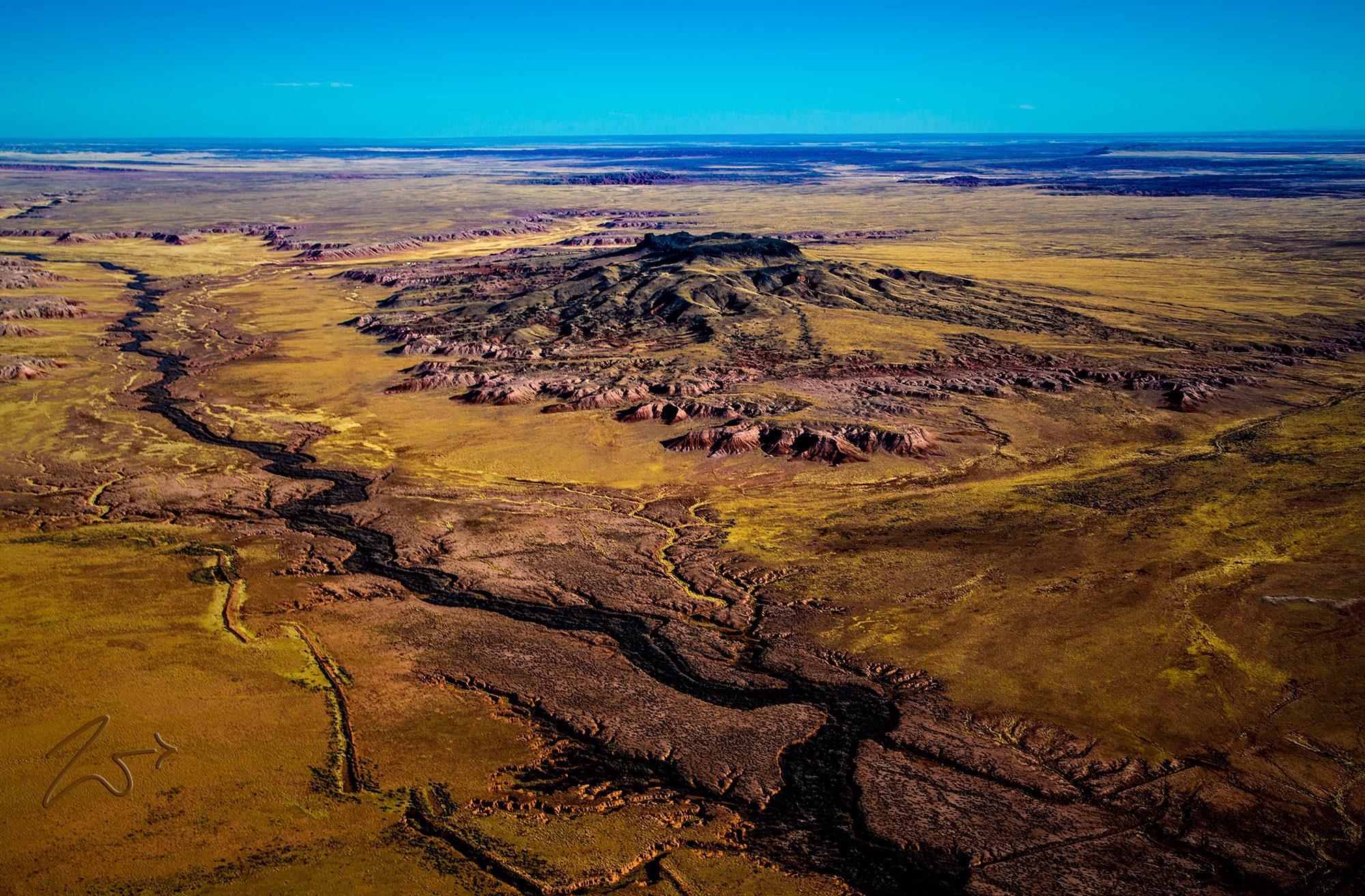 This beautiful formation is the Pueblo Colorado Wash just south of Arrowhead Butte located on the First Nations Navajo (Diné) Reservation northeast of Winslow, Arizona. The Navajo prefer to be called the “Diné” meaning “The People” or “Children of the Holy People”. The home of the First Nations Navajo Tribes has always been considered one of the aridest and barren portions of the Great American Desert. The average rainfall in this region is from ten to fourteen inches and is usually confined to two short seasons.

The Pueblo Colorado Wash, an alluvial aquifer, is an important water source for the First Nations Diné (Navajo) Reservation. The name “alluvial” refers to the loose, un-layered nature of the material – often silt, clay, sand, and gravel which are deposited by running water in and around rivers. The Pueblo Colorado Wash aquifer is the main source of drinking water for many First Nations Navajo communities and an integral feature of the cultural landscape.

In this image below, the colors of the river as it cuts across the desert are juxtaposed against the vibrant hues of the different rock layers that make up the base of this magnificent butte.

The butte shown in the middle of this photo is 1,912 feet high (582 m) sits about a half-mile north of the formation known as Five Buttes. A butte is an isolated hill with steep, often vertical sides and a small, relatively flat top. The word “butte” comes from a French word meaning “small hill” and buttes usually have a surface area of less than 10,000 square feet.

Buttes such as this are tall, flat-topped, steep-sided towers of rock created through the powerful process of erosion. Millions of years ago the buttes seen in these images were all part of a vast flat elevated area that was either a mesa or plateau. Over time, the overwhelming natural forces of water, wind, and ice slowly cut through the ground and created streams, creeks rivers, and lakes.

This continuous, timeless process slowly eroded away the softer soil while leaving the hard top layer, called a caprock, which resists weathering and erosion. As a result, this formation is about the same height as the original plateau or mesa that surrounded it. Because caprock protects the more vulnerable rock beneath it, buttes are constantly evolving. 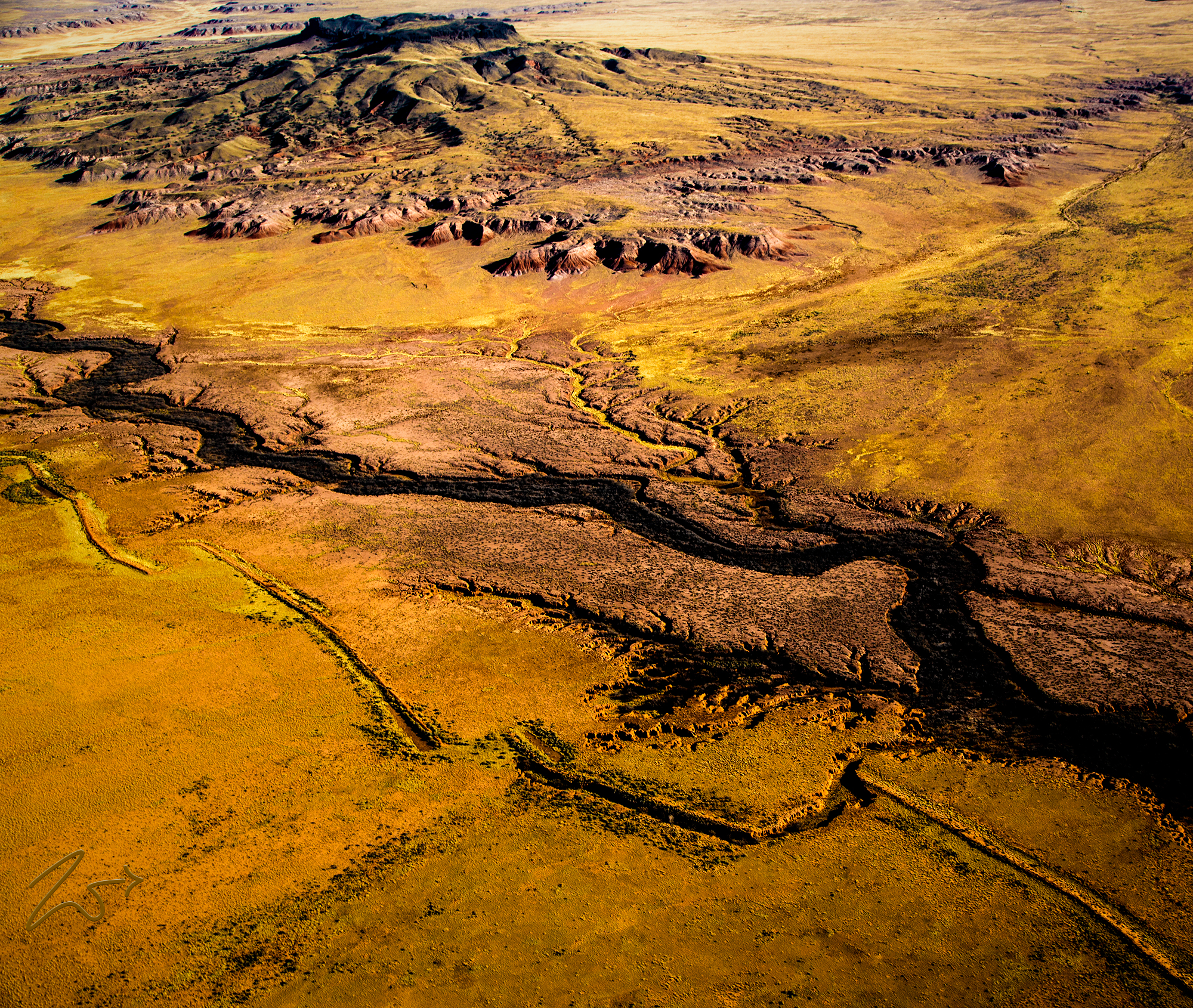 Evidence of this continual process is everywhere in these images. The colorful base of the butte with its many eroded hills of purple and magenta; the many streams and rivulets draining down into the main river and finally the cracked earth fault line on the left side of the image; All of these are a testament to the transformative power of nature.

The beautiful purple colors around the butte are remnants of fluvial deposits left behind by ancient seas and rivers. Most of those deposits are sandstone, which can come in many colors, depending on their age, erosion, and climate at the time in which they were laid down. These colors appear through the ongoing process of erosion which is why you will see stratified layers of color along the same height throughout the area. The vibrant golden colors of the desert and brush along the Pueblo Colorado Wash are a result of the unique atmospheric optics in effect early in the evening when this image was taken.

An interesting thing about this image below; Looking closely at the river, note that there is a carpet of trees and brush that occupy the entire river bottom. Notice the depth of the main river which is running on the right side of the river channel. Many rivulets drain into the main wash, collecting as much water runoff as possible. 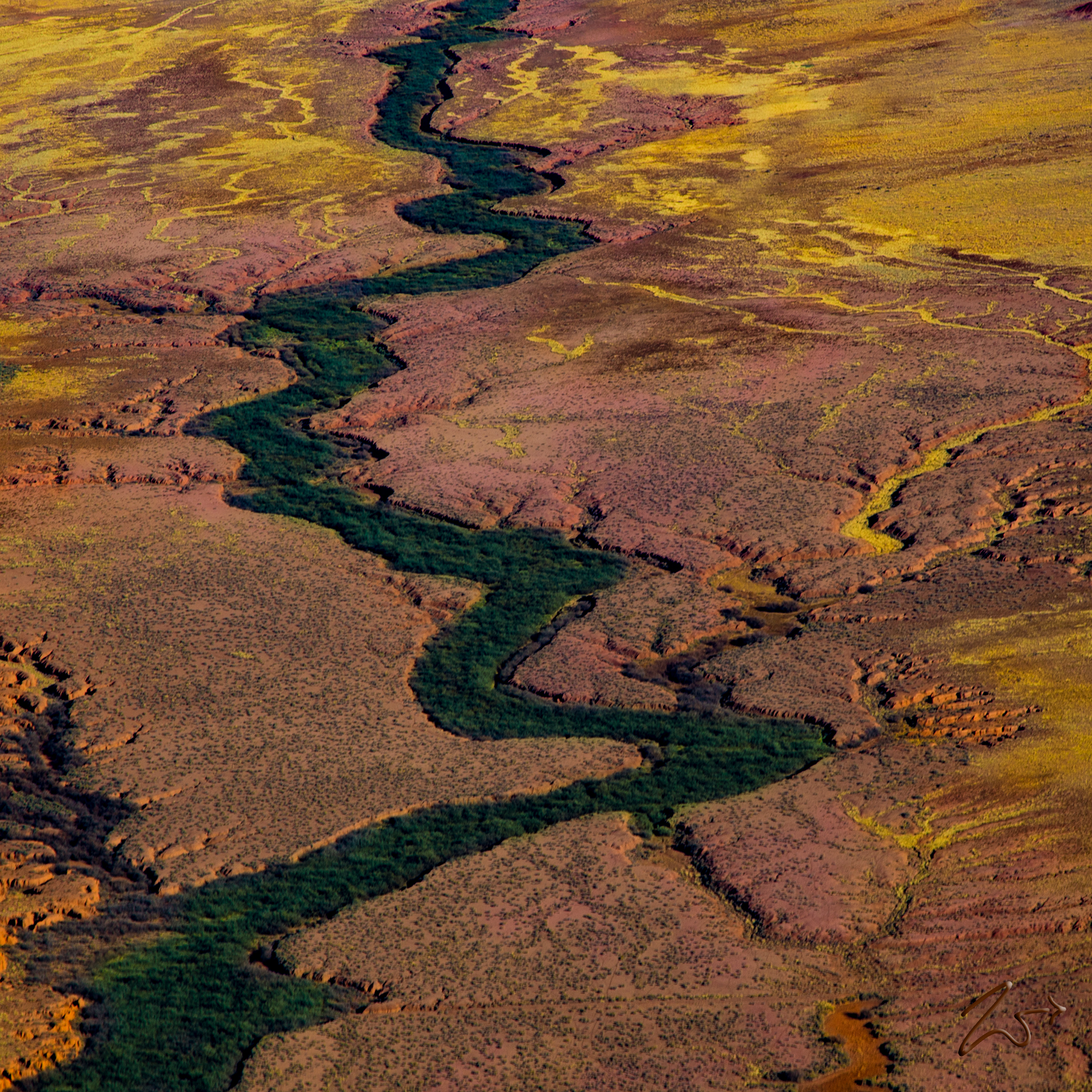 Zedekiah: “As I flew to the southwest, past the Pueblo Colorado Wash I passed by a formation called Five Buttes, which was as the name suggested, five large buttes lined up perfectly in a row. It was an impressive sight.”

Five Buttes sits at the entrance to the Hopi Buttes Volcanic Field, this volcanic field covers an area of approximately 965 square miles (2,500 km) and contains about 300 such volcanic formations.