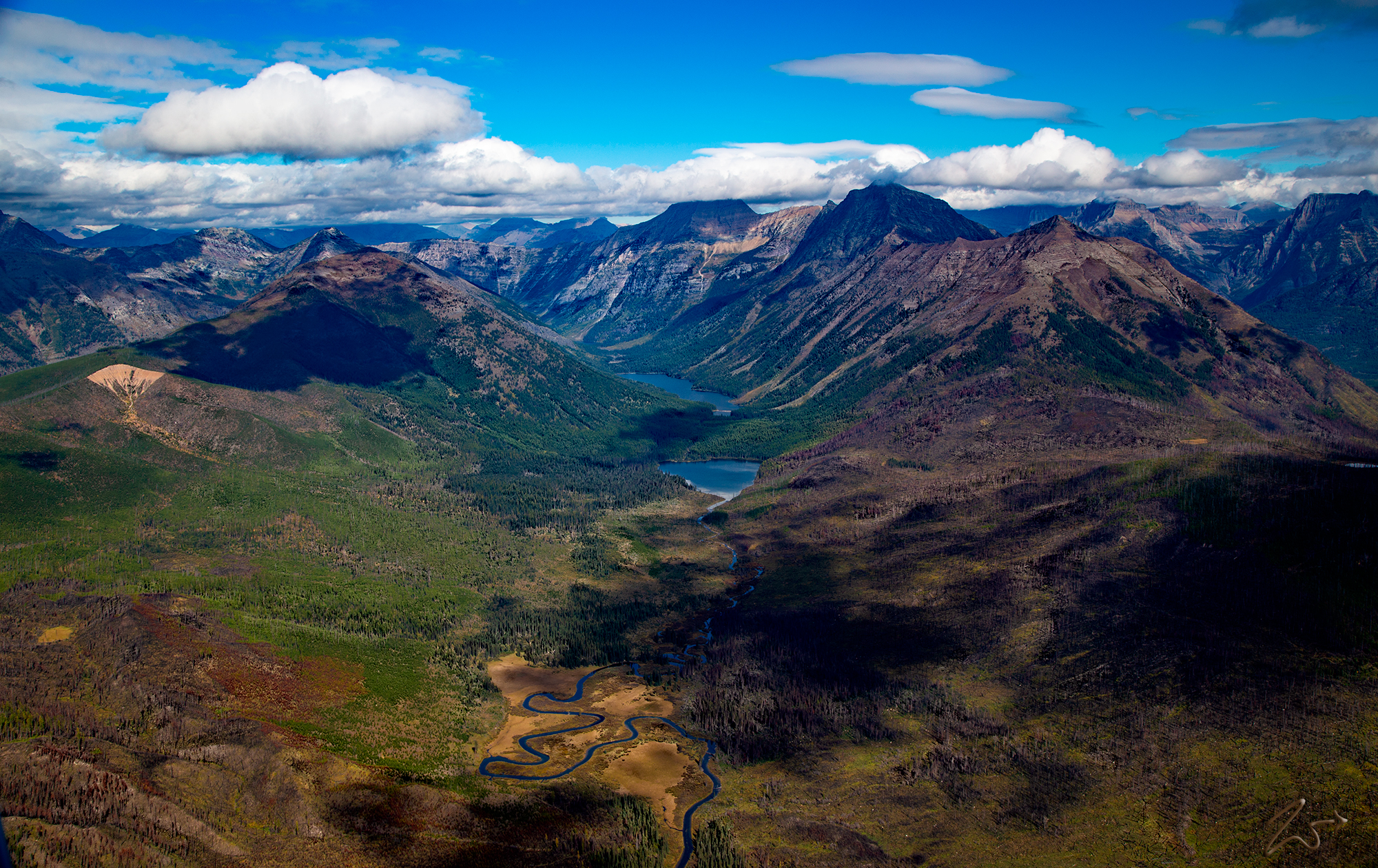 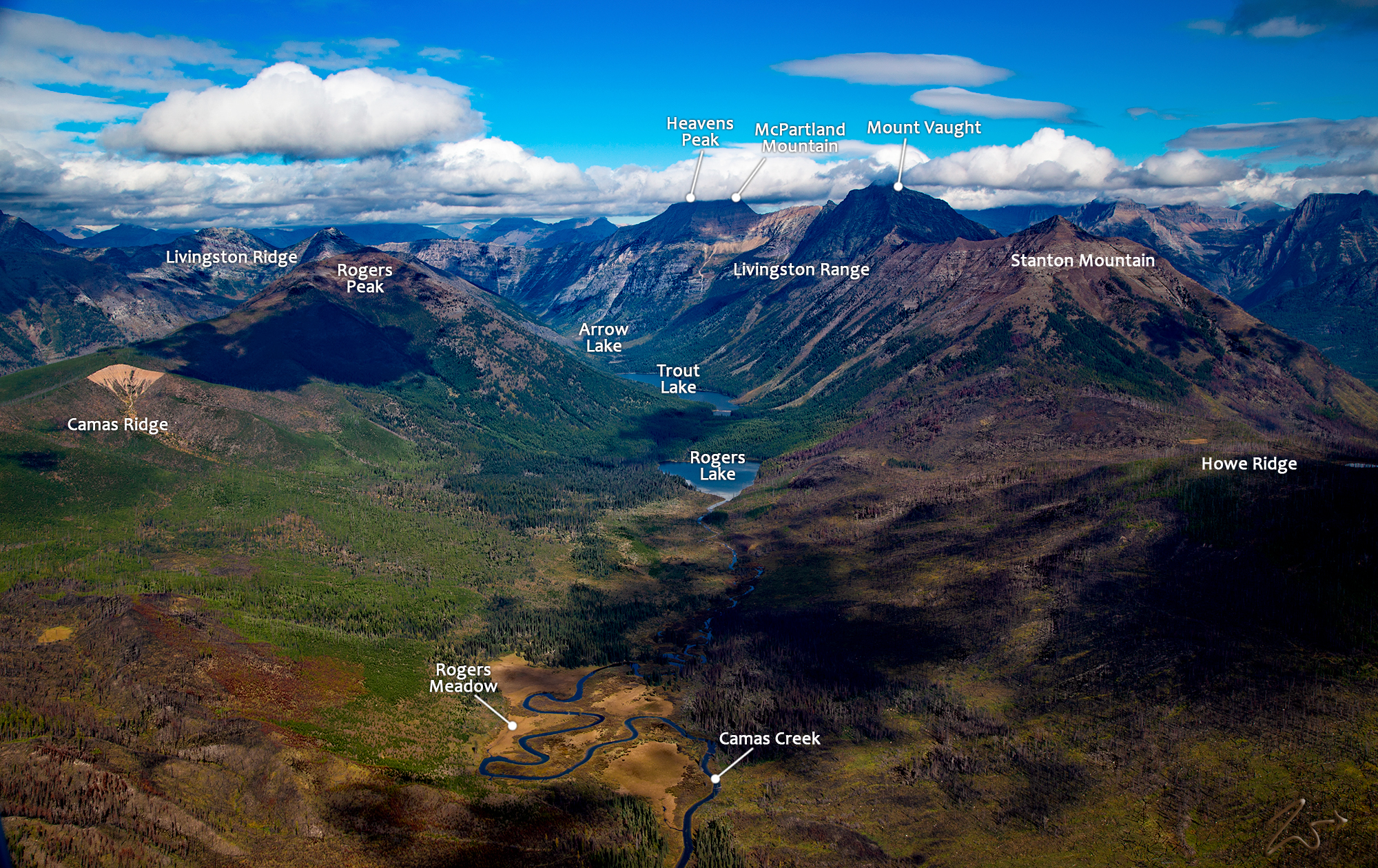 Lensed in the month of October, this is an aerial view showing the crystal blue waters of Camas Creek as it flows westward through Rogers Meadow in the immediate foreground. Above the meadow, the creek comes down out of Rogers Lake, and above that Trout Lake, which in turn is fed from Arrow Lake which you can barely see nestled in the bottom of the valley. On the right side of the image lays Howe Ridge and above that is Stanton Mountain and the beginning of the Livingston Range with Mount Vaught followed by Heavens Peak which is sticking up into the clouds. On the left side of Camas Creek lays Camas Ridge which slopes up to become Rogers Peak and then on into Livingston Ridge.  This is the magnificent Glacier National Park.

The burnt timber on both Howe and Camas Ridges are results of forest fires… on the left, Camas Ridge was decimated by the Moose Fire, caused by lightning in 2001, which burned 70,609 acres. On the right side, remnants of 2 major fires still scar the landscape, most recently in 2018. There are still large sections of land scarred from back in 2003, known locally as the “Summer of Fire” the man-caused Robert Fire of 2003 ravaged 52, 747 acres and was part of a series of fires that consumed 13% of the entire Glacier National Park, the worst fire season in the park’s history. 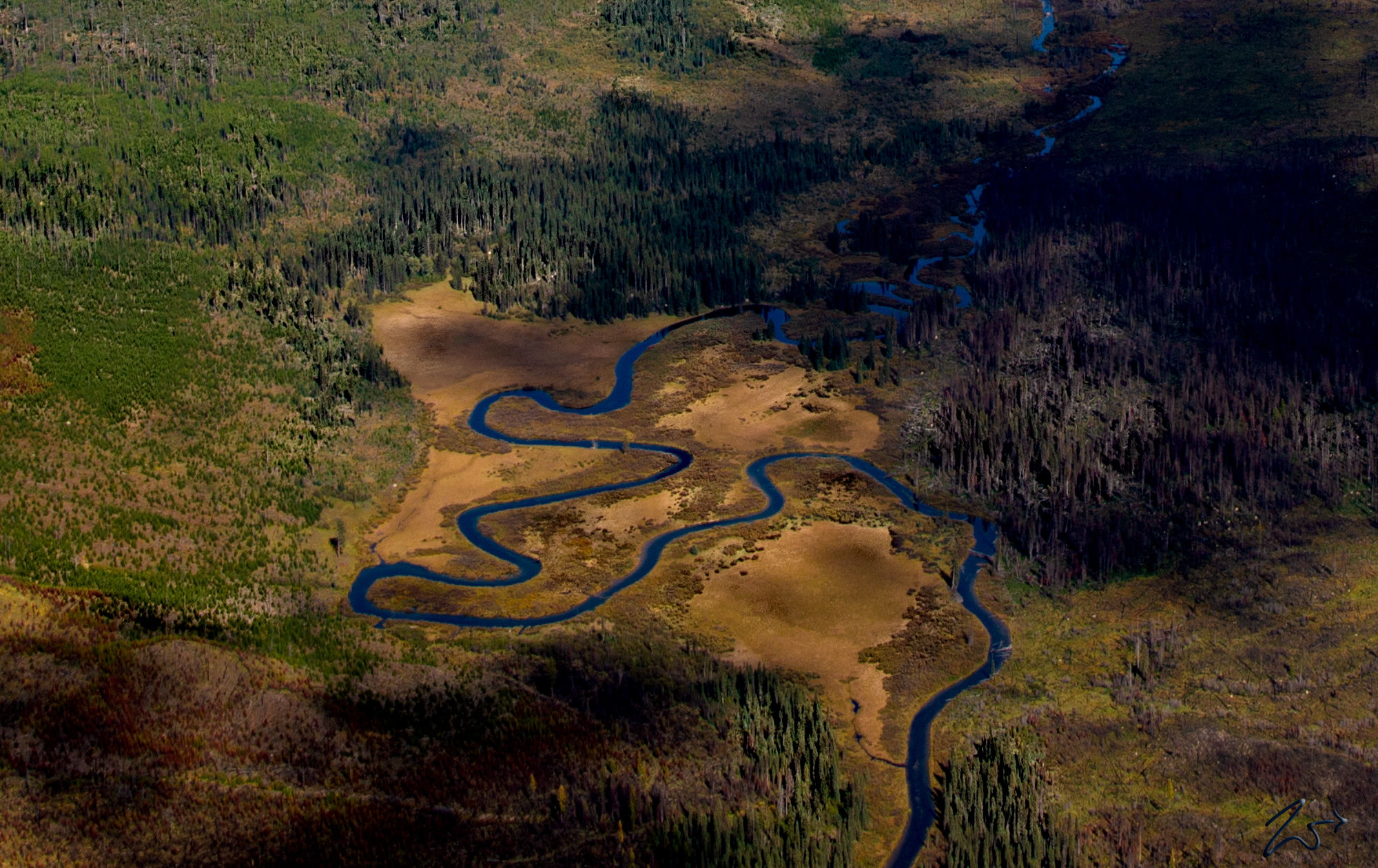 Above, Camas Creek meanders lazily in a serpentine fashion around the meadow, guided by gravity and the lay of the land as it moves towards the North Fork of the Flathead River. This closer look at Rogers Meadow, named after Josiah “Joe” Rogers, the homesteader who settled here in 1896. On this meadow was his ranch with 100 horses and numerous cattle. He raised acres of Timothy Hay and had 1.5 miles of fencing surrounding the meadow, now all taken away back in the early 1900s. After losing his wife to illness here in 1908 and in 1914 he sold the land which later became part of Glacier National Park.

In this image below, Rogers Lake empties down into Camas Creek, which along with the nearby Camas Ridge are named after the abundant Camas plant. Camas is known by many names:  Camas, Quamash, Indian Hyacinth, Camash, and Wild Hyacinth. As part of the genus of plants in the asparagus family, Camas was an important food staple for First Nations peoples such as the Nez Perce (Nimíipuu), Cree, Coast Salish, Kalapuya, Blackfoot, and Yakama among many others. The Kutenai called the camas “xapi” (Ktunaxa). And Camas bulbs even helped members of the Lewis and Clark Expedition survive. 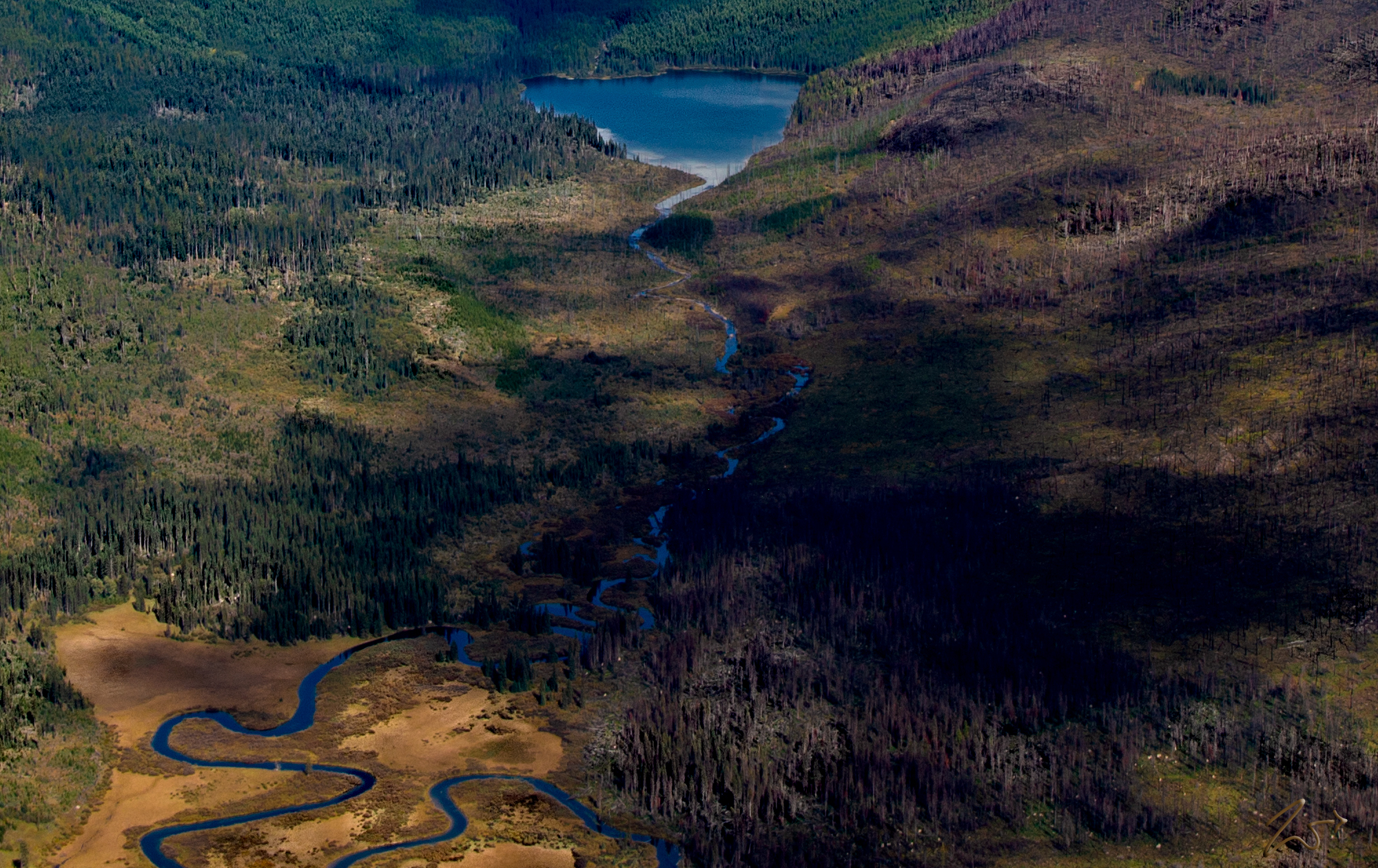 In this image below, in the top left of the valley lays Arrow Lake which drains through Camas Creek into Trout Lake which then flows through a small waterfall into Rogers Lake and then continues its path to the west. 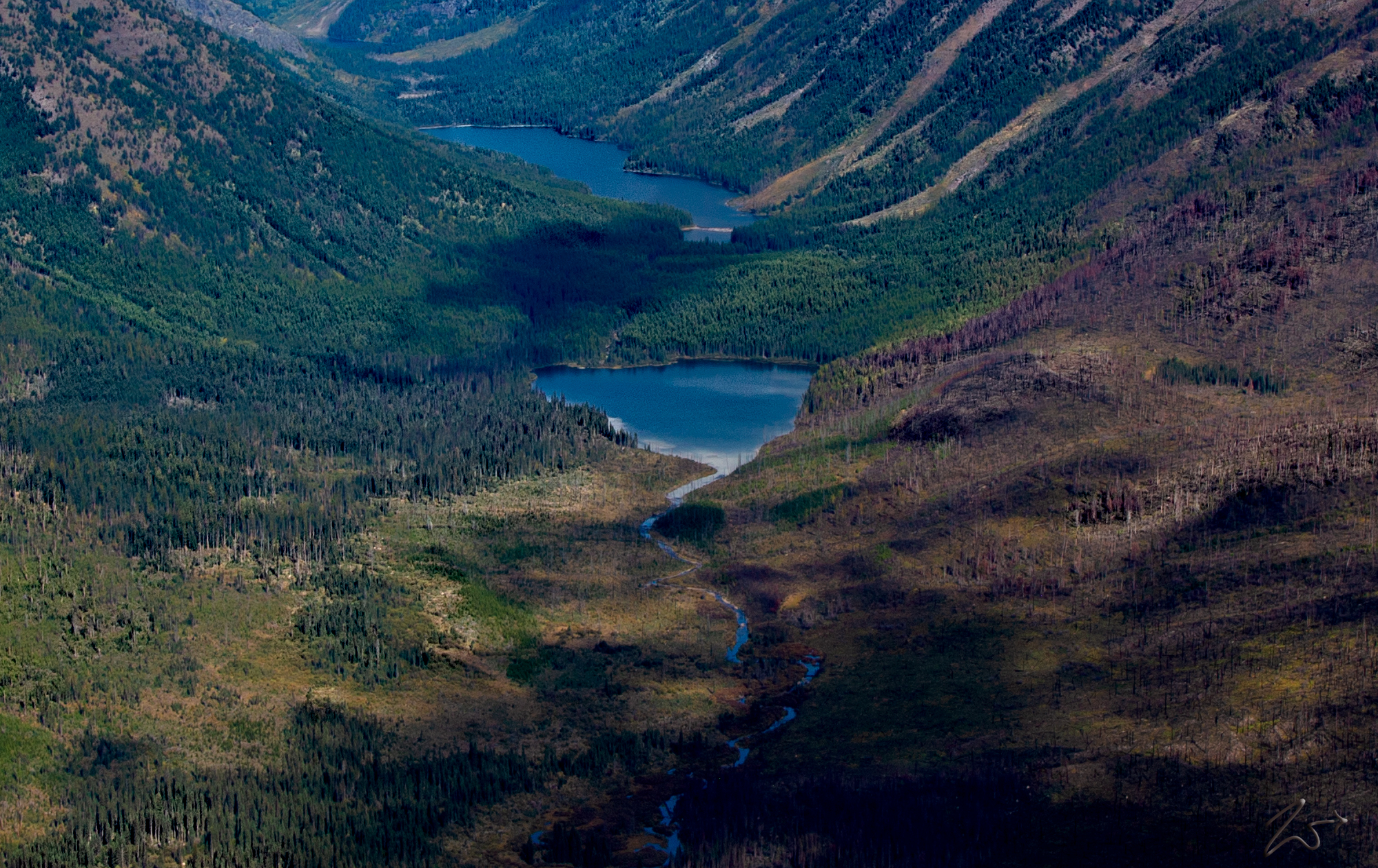 A really interesting struggle is occurring where National Park Biologists are trying to eliminate non-native invasive species of fish in these lakes and Camas Creek, where originally there never was a native species of fish!  Because these lakes have only recently been unlocked from the last ice age, no fish ever lived in the upper Camas lakes because native fish species have had less time and opportunity to naturally occur and colonize. So, to accommodate the growing popularity of fishing in the newly established Glacier National Park, these lakes were stocked beginning in the 1920s with a variety of non-native fish like the Yellowstone cutthroat, which eventually has become a serious nightmare for the real native fisheries downstream in the Flathead River and Flathead Lake.

They cannot simply get rid of the fish however because now there is much wildlife which depends on them for food. The long term lack of native fish would cause an ecological ripple effect because the relationship between fish-to-fish & wildlife is an interconnected dependency. There are numerous obligate piscivores (animals that eat fish), and birds such as ospreys, and loons, that eat native fish. So if these fish were to vanish or alter their habits it would dramatically affect access to these fish which would be very damaging in the long term. So now the park service is working on a program to reintroduce a pure stock of Westslope Cutthroat, Bull Trout, and Sculpin to the lakes and creek.