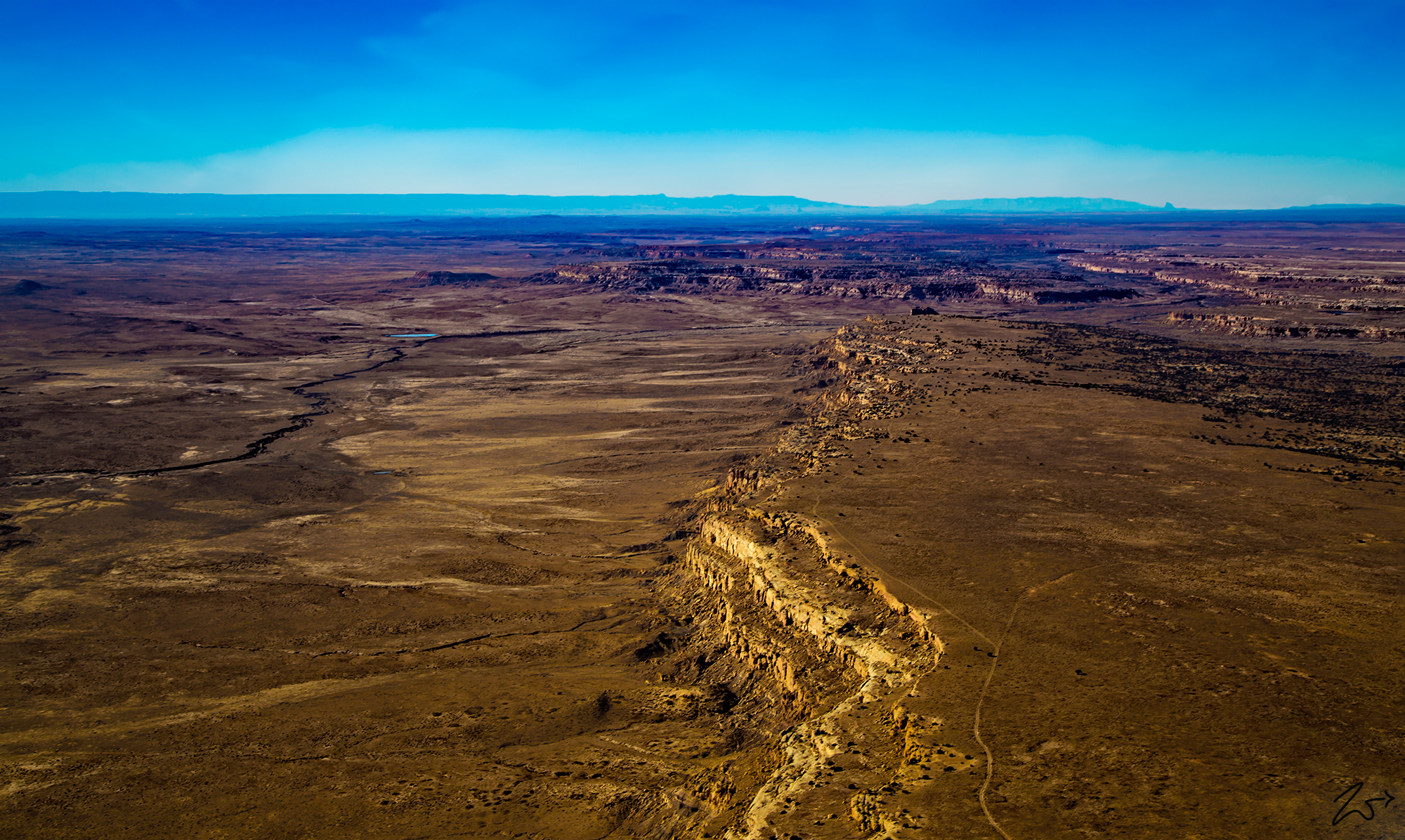 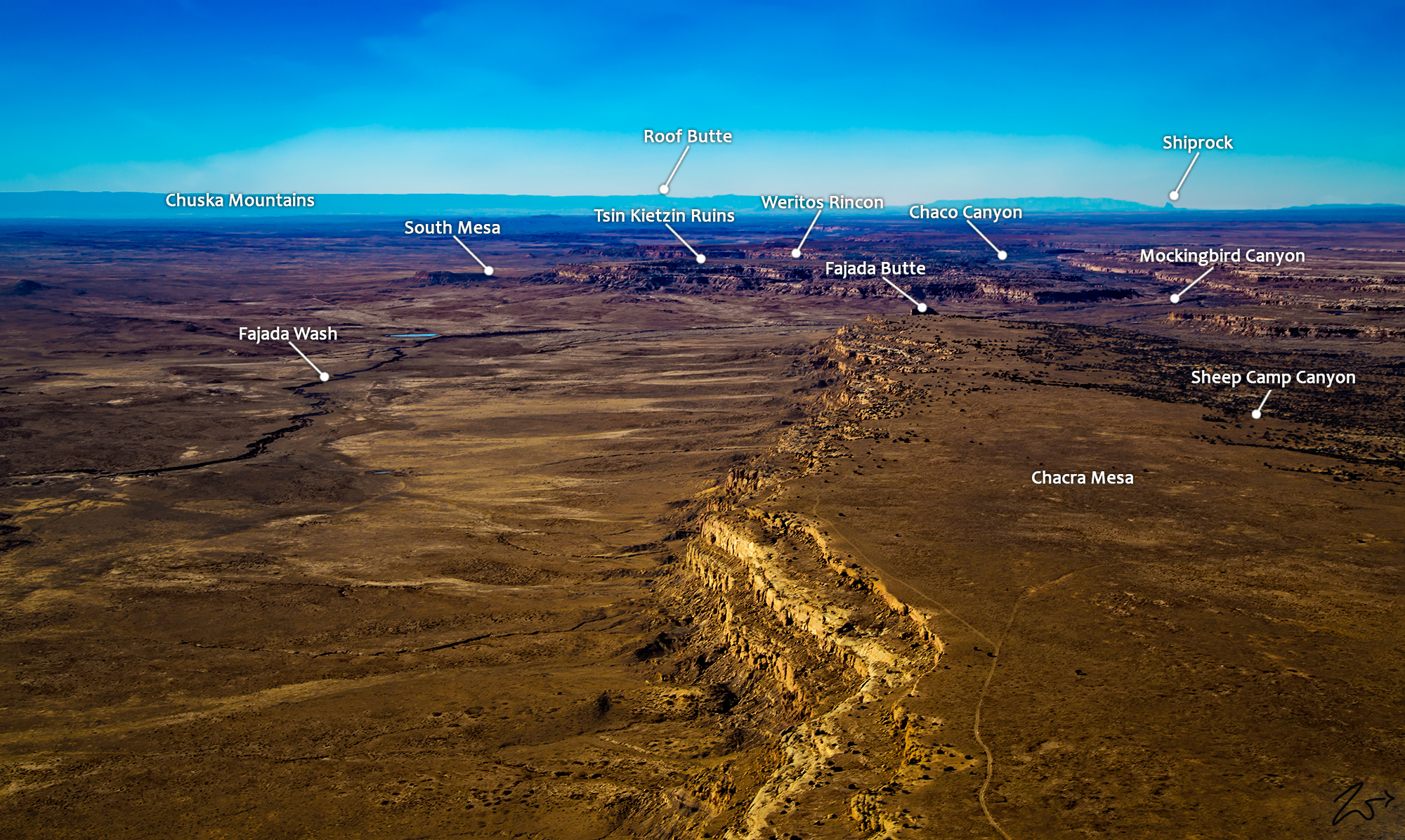 Chacra Mesa is part of  Chaco Culture National Historical Park,  a National Historical Park hosting the densest and most exceptional concentration of ancient Anasazi pueblos in the American Southwest.  This vast wilderness area contains one of the most sweeping collections of ancient ruins north of Mexico. Here are preserved some of the most crucially important pre-Columbian cultural and historical areas in the world.In the image above we are looking east along the edge of Chacra Mesa, in the image directly below we are looking west towards Chaco Canyon. If you follow the dirt road in the foreground of this image you can see where it splits off to the right into the middle of that mesa top prairie. This is the location of Tsin Kletzin, an Ancestral Puebloan great house, and a very important archaeological site.

Imagine if you can, just over 900 years ago there was an Anasazi Great House with 81 rooms, 3 kivas, and a plaza constructed to create a 2-story structure. The plaza was enclosed by a wall, and a 1-meter-wide entry portal allowed access to the plaza from the south. The masonry style of this complex is called McElmo (Chaco-McElmo), characterized by large sandstone blocks and some tubular slabs. This was once a truly beautiful home for many First Nations people!

Zedekiah: “Crossing over the top western end of Chacra Mesa, you can see the abrupt cliff edge towering over Fajada Wash. In the distance along the river, you can see historic Anasazi roads”
Looking further to the top middle of the image you can see Chaco Canyon, this entire canyon in the distance is the Chaco Canyon National Monument. These are very sacred lands to the First Nations Diné (Navajo) and Hopi tribespeople who are considered to be the descendants of the ancient Anasazi.

The central portion of that canyon contains the largest Chacoancomplexes. The most studied is Pueblo Bonito. Covering almost 2 acres (0.81 ha) and comprising at least 650 rooms, it is the largest great house; in parts of the complex, the structure was four stories high. 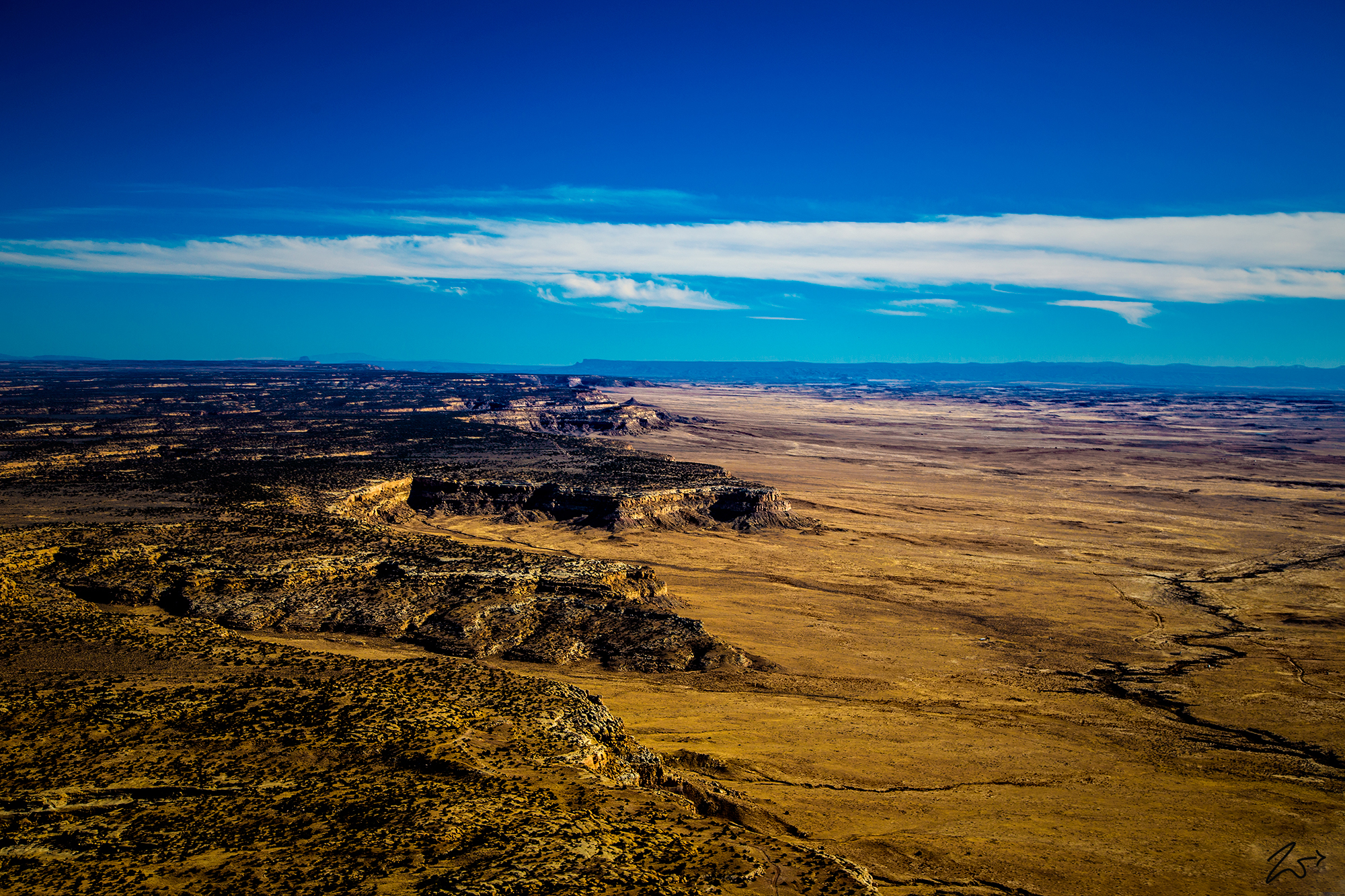 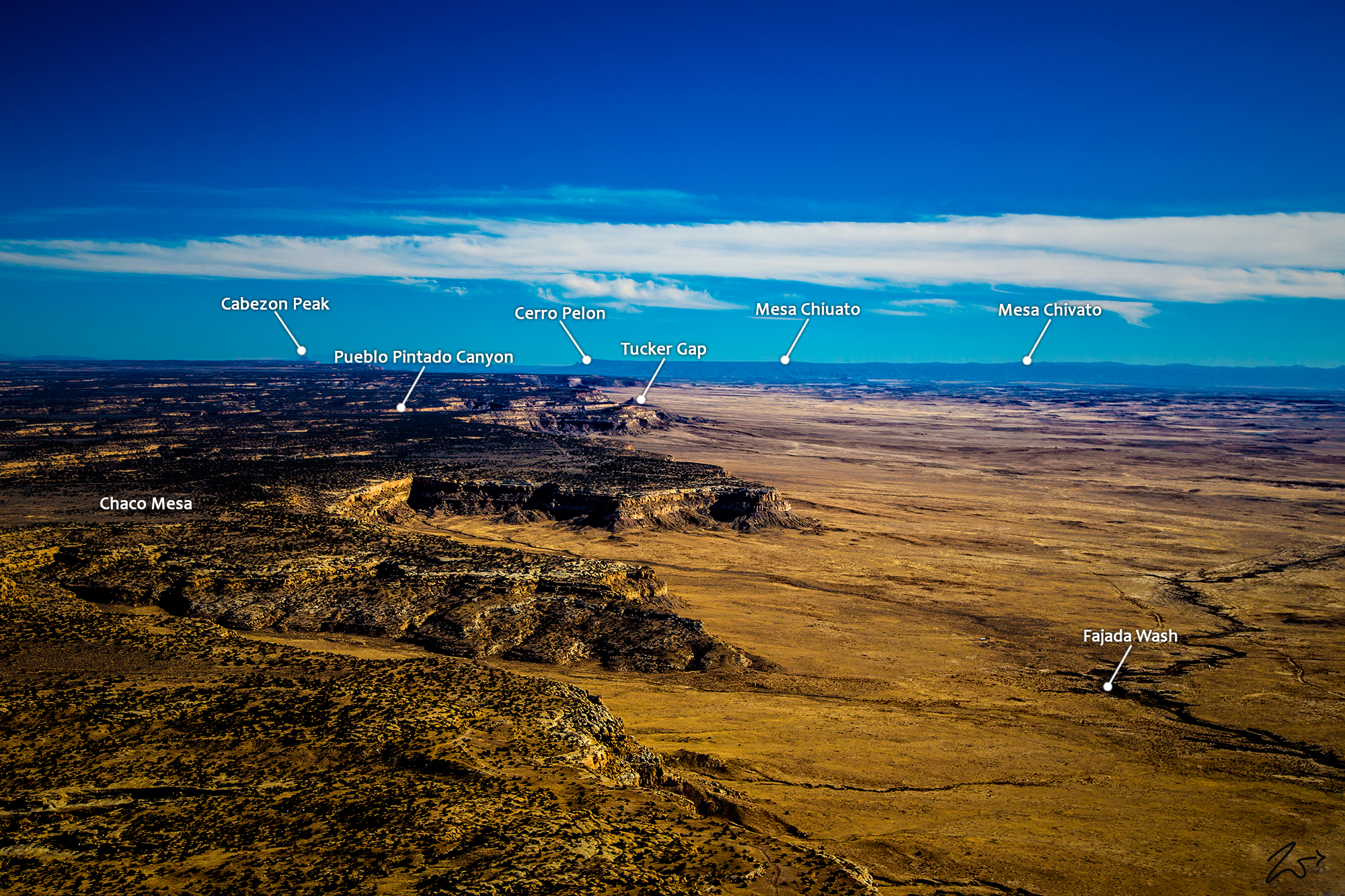 In the image below, Fajada Butte rises 135 meters above the canyon floor of Fajada Wash, this is also part of the Anasazi culture of Chaco Canyon. Although there is no water source on the butte, there are ruins of small cliff dwellings in the higher regions of the butte. Analysis of fragments of pottery found at these ruins determined these structures were used between the 10th to 13th centuries. 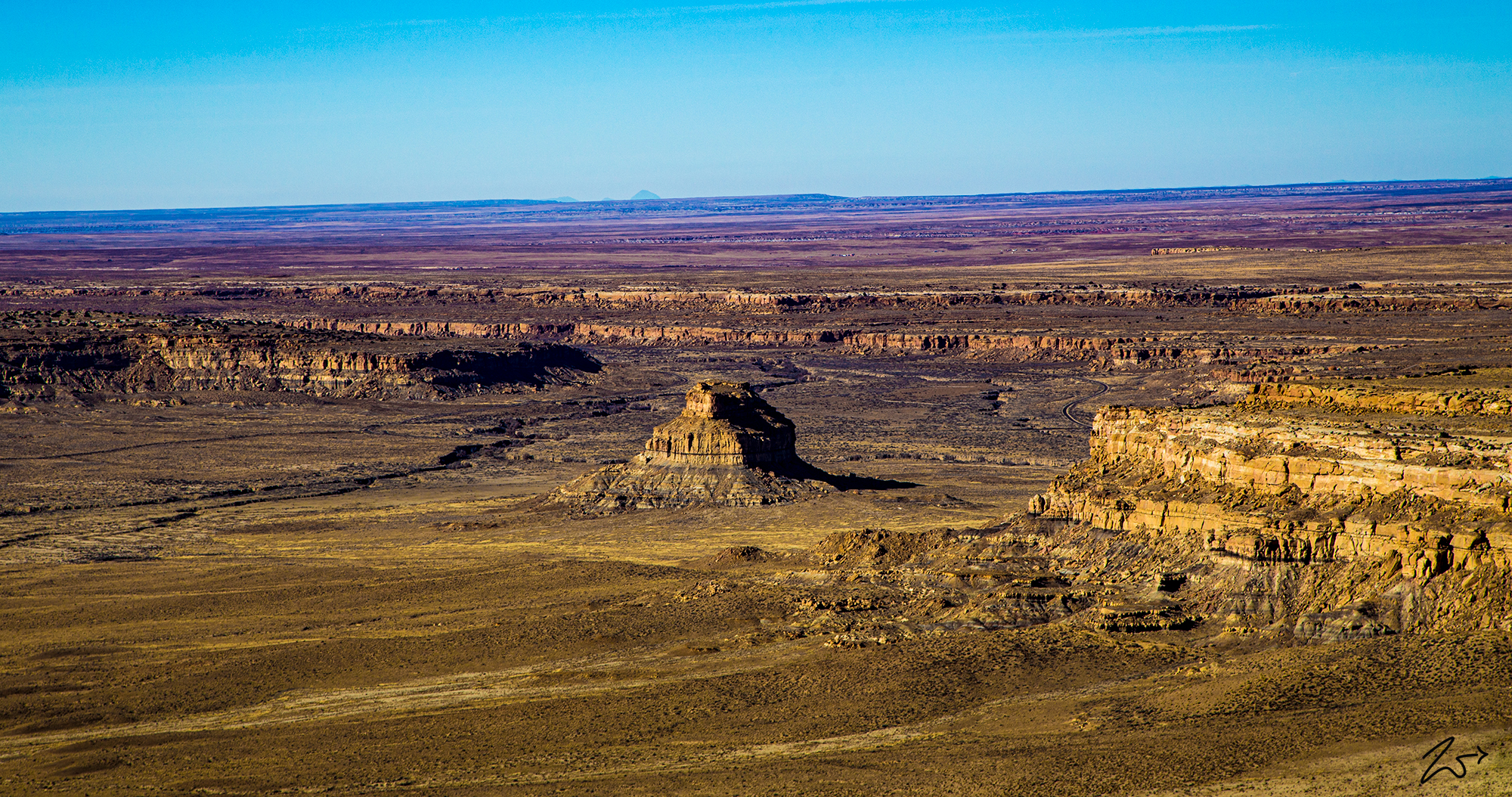 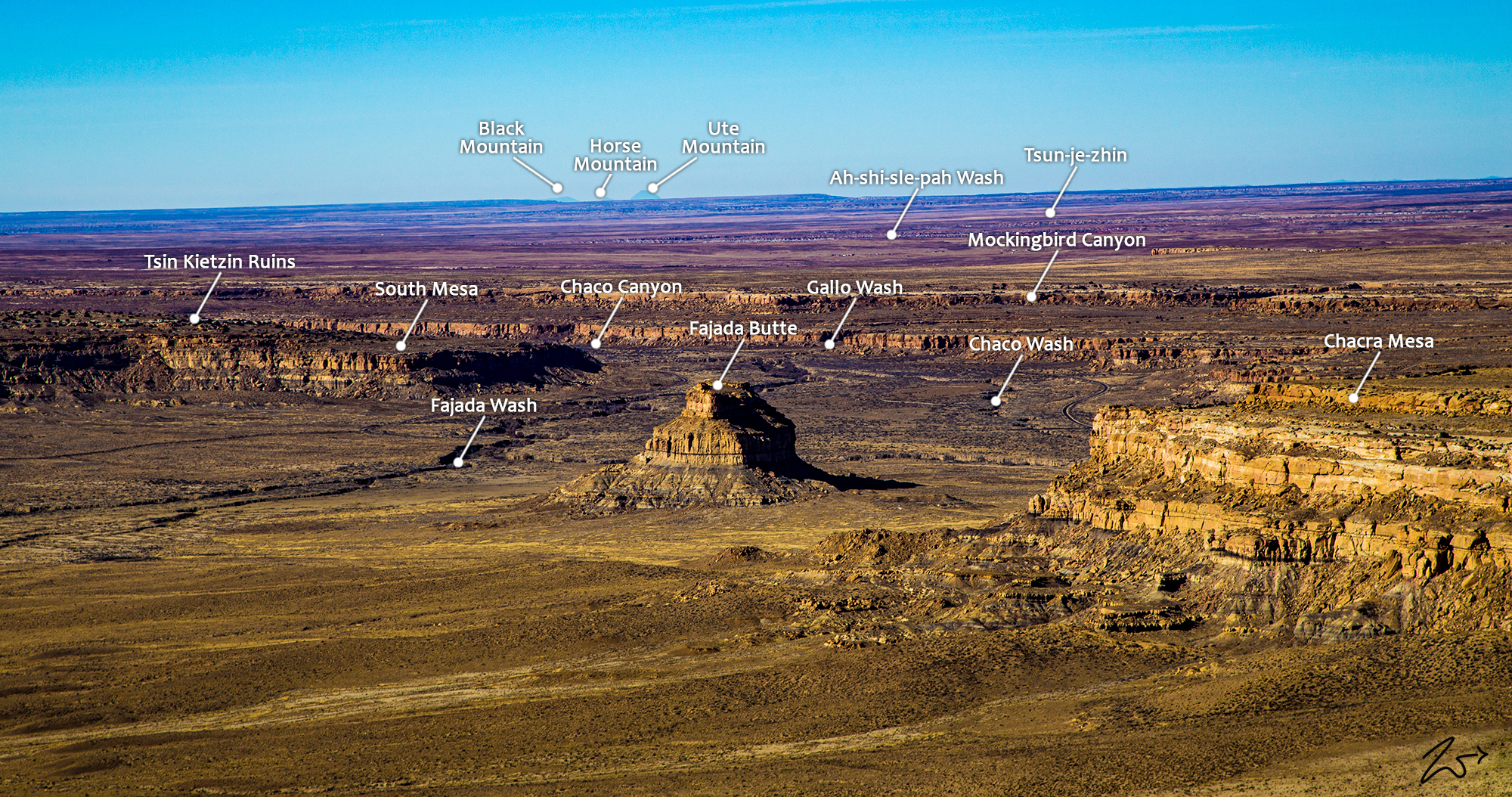 If you enlarge this image and look closely on the bottom left side of the butte in the middle you can see the remains of a 95-meter-high, 230-meter-long ramp going up the first lower cliff. The sheer magnitude of this building project, done by hand and without an apparent utilitarian purpose, indicates that Fajada Butte may have had considerable ceremonial importance for the Chacoan people.
Zedekiah: “As I flew westward, away from the cliffs of Chacra Mesa, across the desert floor below I could see numerous old roads radiating out from the central-southern entrance in Chaco Canyon. While some followed Fajada Wash and were obviously in use as dirt roads that connected the small First Nations Diné (Navajo) farms that sparsely dotted the harsh desert, others were the ancient straight roadways built by the Anasazi people as part of the Chacoan Culture beginning 1,200 years ago.”

Chacoan roads are generally aligned very precisely, and continue for considerable distances with the same alignment without curving or adapting to the landscape as modern roads and trails usually do. When they do change direction, it tends to be with sharp, angled turns rather than gentle curves. When a road comes to a mesa or cliff face, rather than curving or turning it will often go straight up with stairs carved into the rock and continue on top with its original alignment.

One of the most remarkable aspects of Chaco Culture, at least from a modern perspective, is the extensive system of finely engineered roads both within the canyon and extending out a considerable distance to the outlying sites throughout the San Juan Basin and beyond. These roads are remarkably safe, straight, and carefully constructed. The ones inside the canyon average about 15 (4.5 m) feet in width, while the ones going out toward the communities outside the main canyon tend to be about twice that wide at 30 feet (9 m). 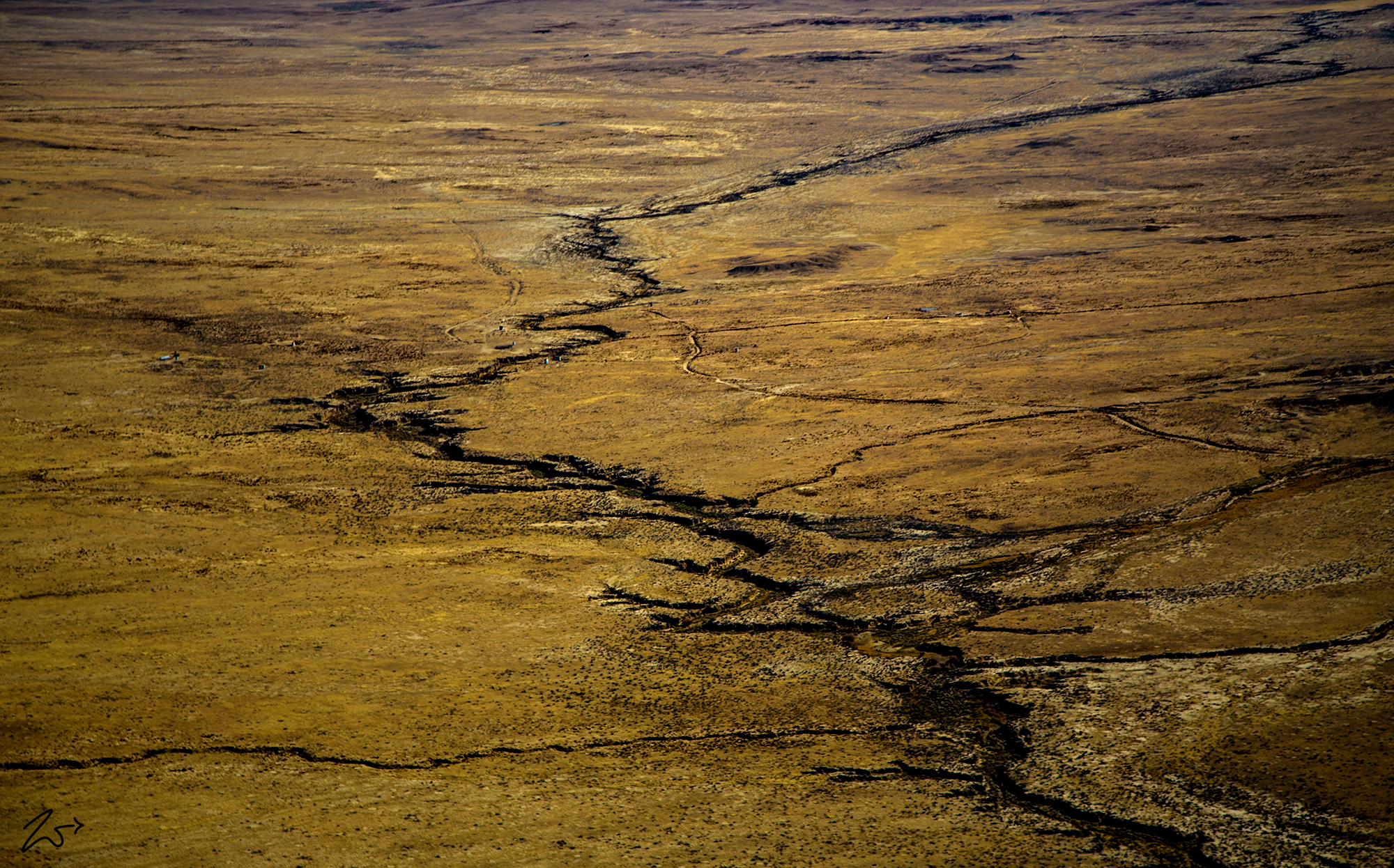 In the image above you can see the remains of ancient Chacoan roadways. It is interesting when you realize this ancient society had neither pack animals nor wheeled vehicles. So it is unclear what, if any, practical need could have required roads 30 feet (9 m) wide! The enormous amount of labor invested in the construction of the roads at a scale well beyond practical need suggests a higher purpose than mere transportation.