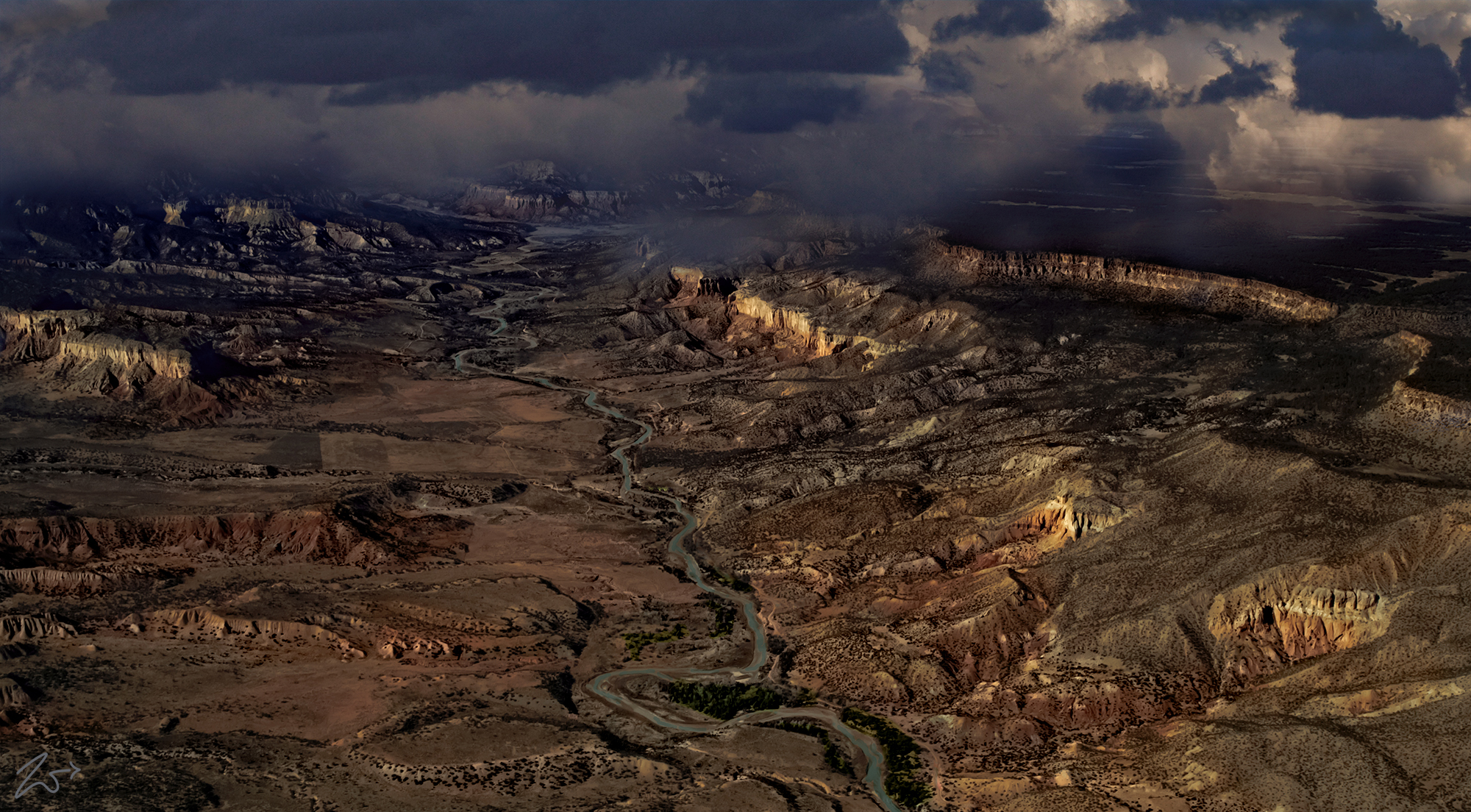 This is Chama Canyon or rather  Cańon De Chama is an ancient place, used by First Nations Tribes for nearly 10,000 years, from the time period when camels and wooly mammoths roamed the southwestern United States. Running down the bottom of this wide canyon is the Rio Chama. At 130 miles (210 km) long, this river is a major tributary of the Rio Grande.

Alpenglow from the sun, yet to breach the horizon, creates a warm glow radiating off of the golden cliff faces along the canyon walls, and the still darkened deep blue sky in the distance is a recent remnant of the night sky, hence its deep tones. 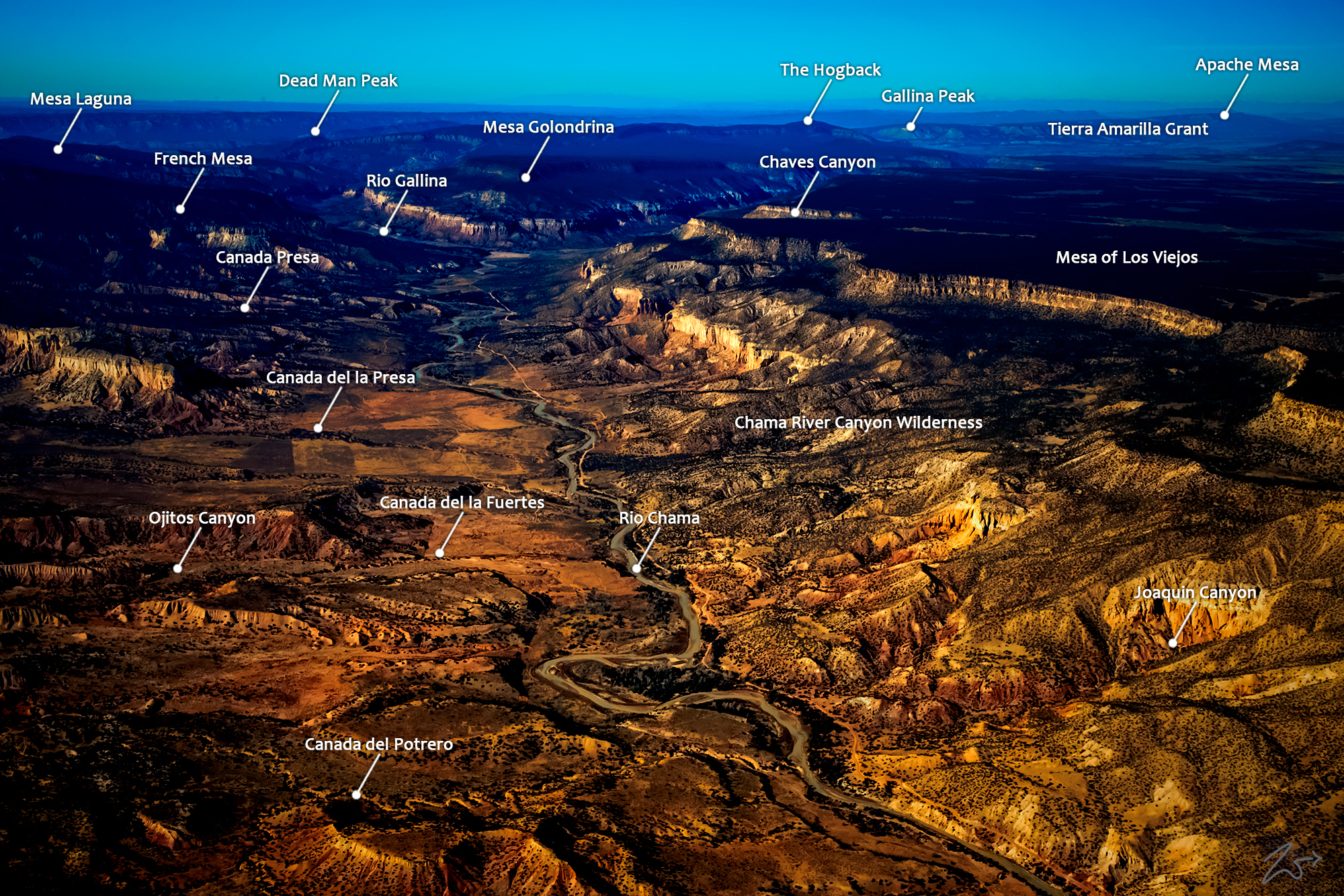 Chama River Canyon Wilderness is a relatively small 50,300 acre (20,356 ha) protected wilderness area that exists along the river in the bottom left area of the photo above. This river is a well-known river rafting, canoeing, and kayaking.  This timeworn valley is home to dense stands of ponderosa pine, douglas-fir, pinyon, juniper, mountain-mahogany, gambel, oak, and serviceberry. The riparian area also includes cottonwoods, box elder, willows, hackberry, and numerous shrubs that are indigenous to north-central New Mexico.

This foreboding place below is called Mesa De Los Viejos (Plateau of the Old Ones) on the right side of the image while the Rio Chama (river) runs along the bottom of the canyon and forks into the Rio Gallina at the base of Golondrina Mesa (here in the middle of the image).

Along the horizon are the La Plata Mountains, the Needle Mountains and Mount Ebert 185 miles to the north in the Rocky Mountains of Colorado. 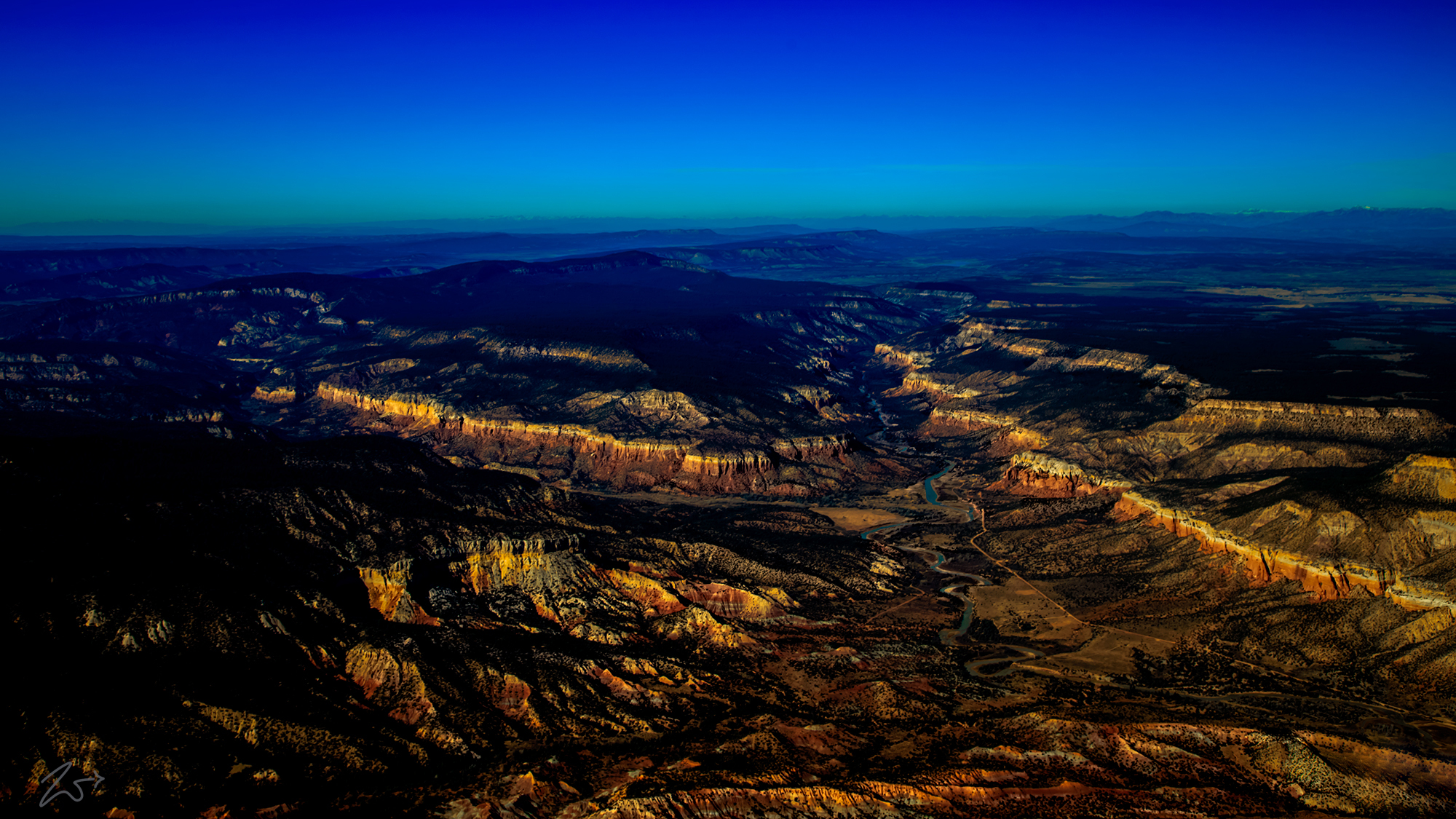 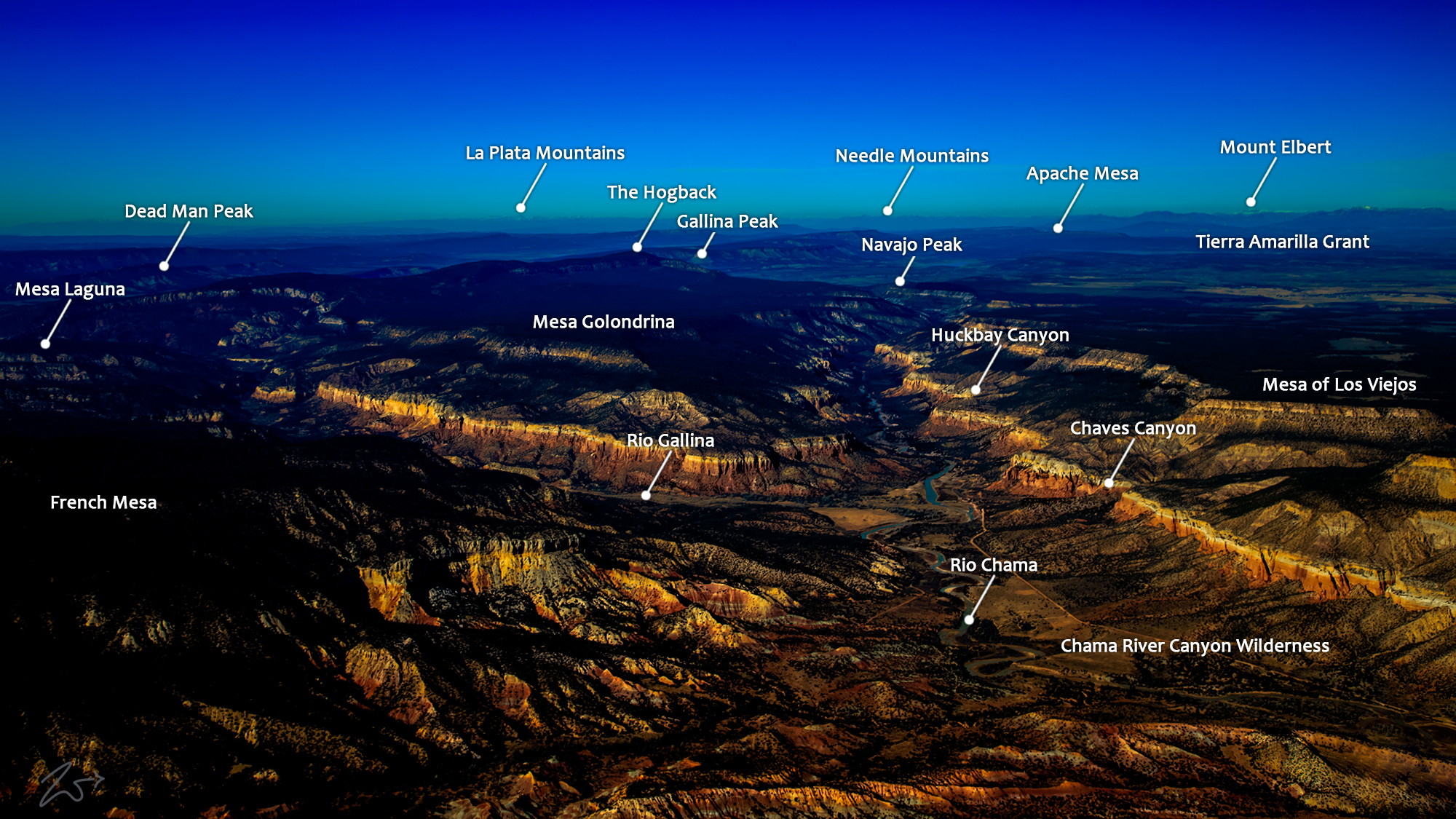 Zedekiah: Flying southwesterly I crossed the ridge from Chama River Canyon and followed the Rio Gallina as it crossed Capulin Mesa. Here was a dramatically lifted ridgeline, rising sharply up out of the canyon floor. This long, partitioned solitary monocline ran for miles up through the canyon. 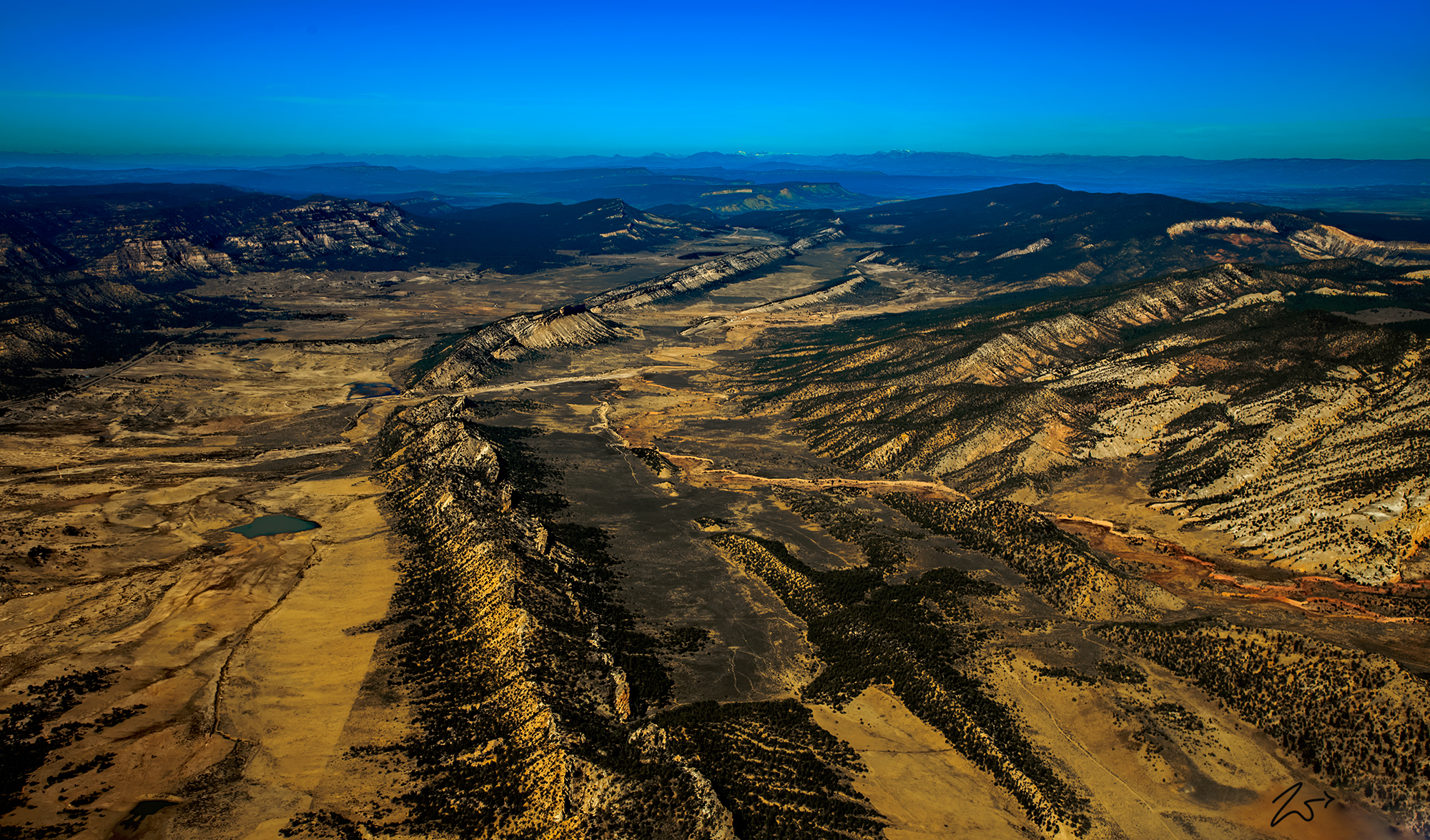 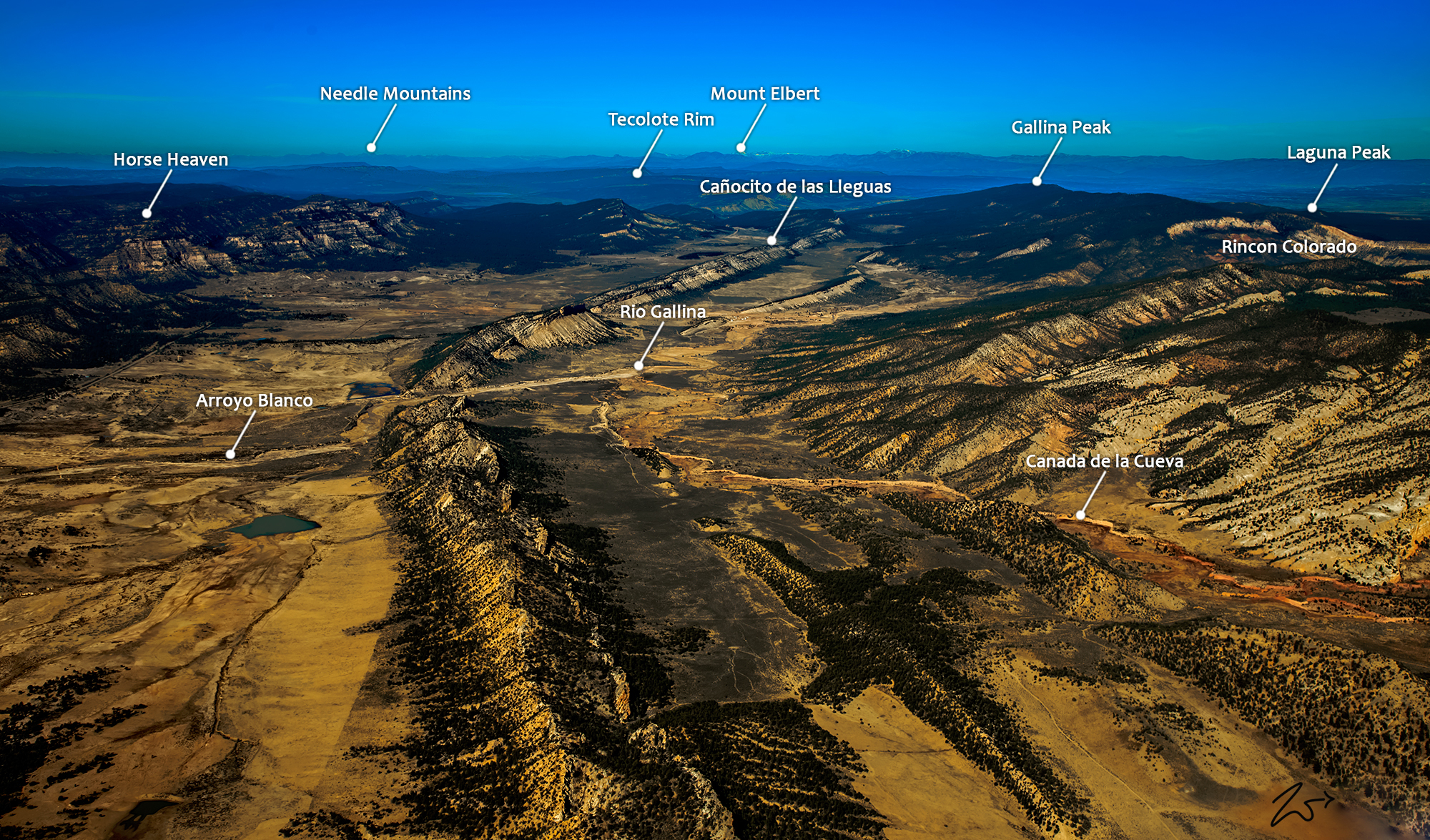 Reaching back across thousands of years the Rio Gallina was home to the Gallina (also known as the Largo-Gallina) culture was an occupation sequence during the pre-Hispanic period in the American Southwest/ As members of the Ancient Anasazi Ancestral Puebloans people they thrived from approximately 1050 to 1300.

No one knows exactly what happened to them, however, their few remains tell a dark tale; Almost every Gallina skeleton ever found has been that of someone murdered. Broken necks are the most common and the skeletons rarely appear to have been buried. Also commonly found has been remains of Gallina who were murdered, thrown into their homes, and then had the homes burned. Some of the skeletons of the murder victims have been found in the towers. The debate is ongoing for the cause of these murders. Genocide has been considered, and so has internecine war.