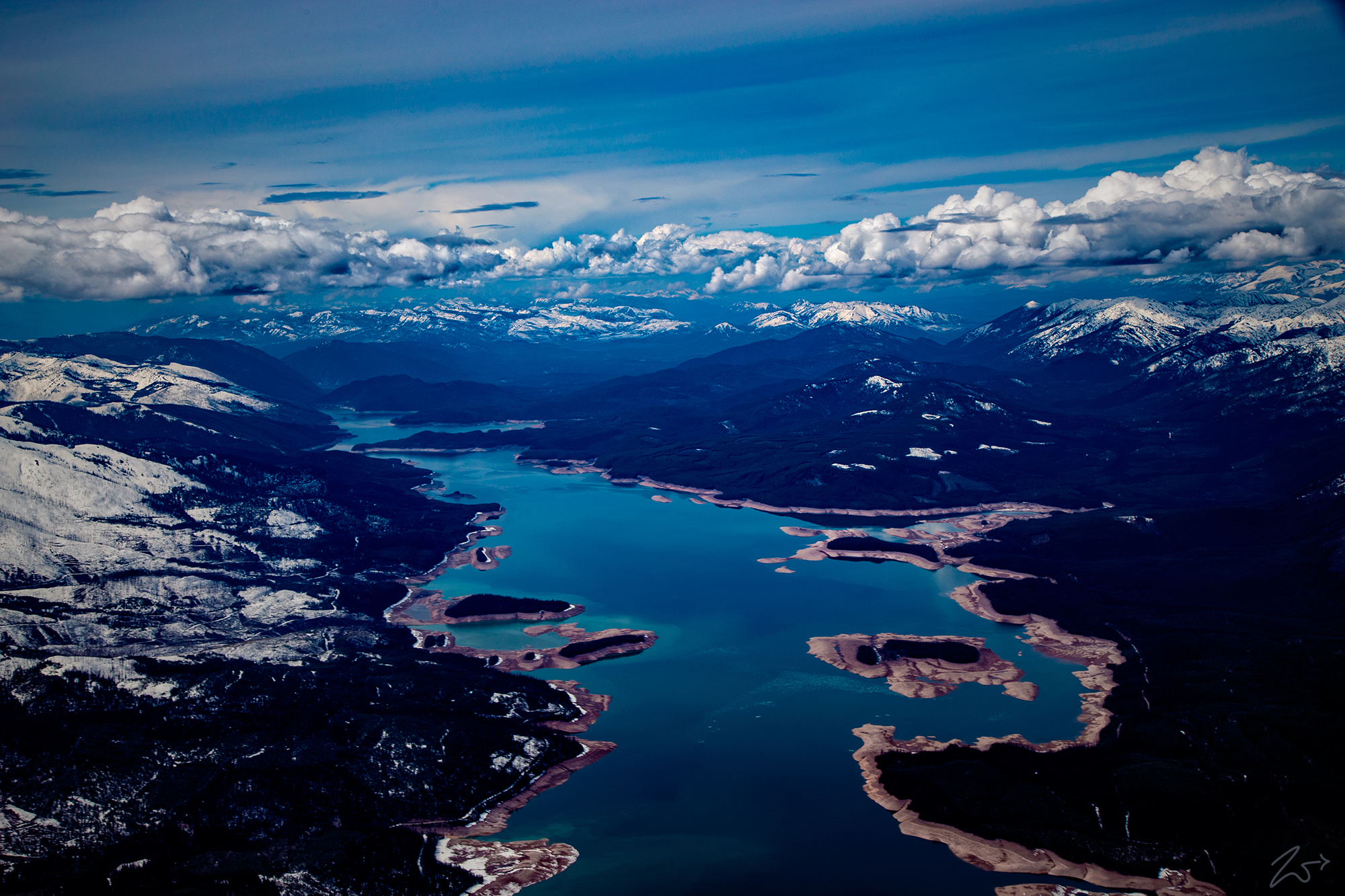 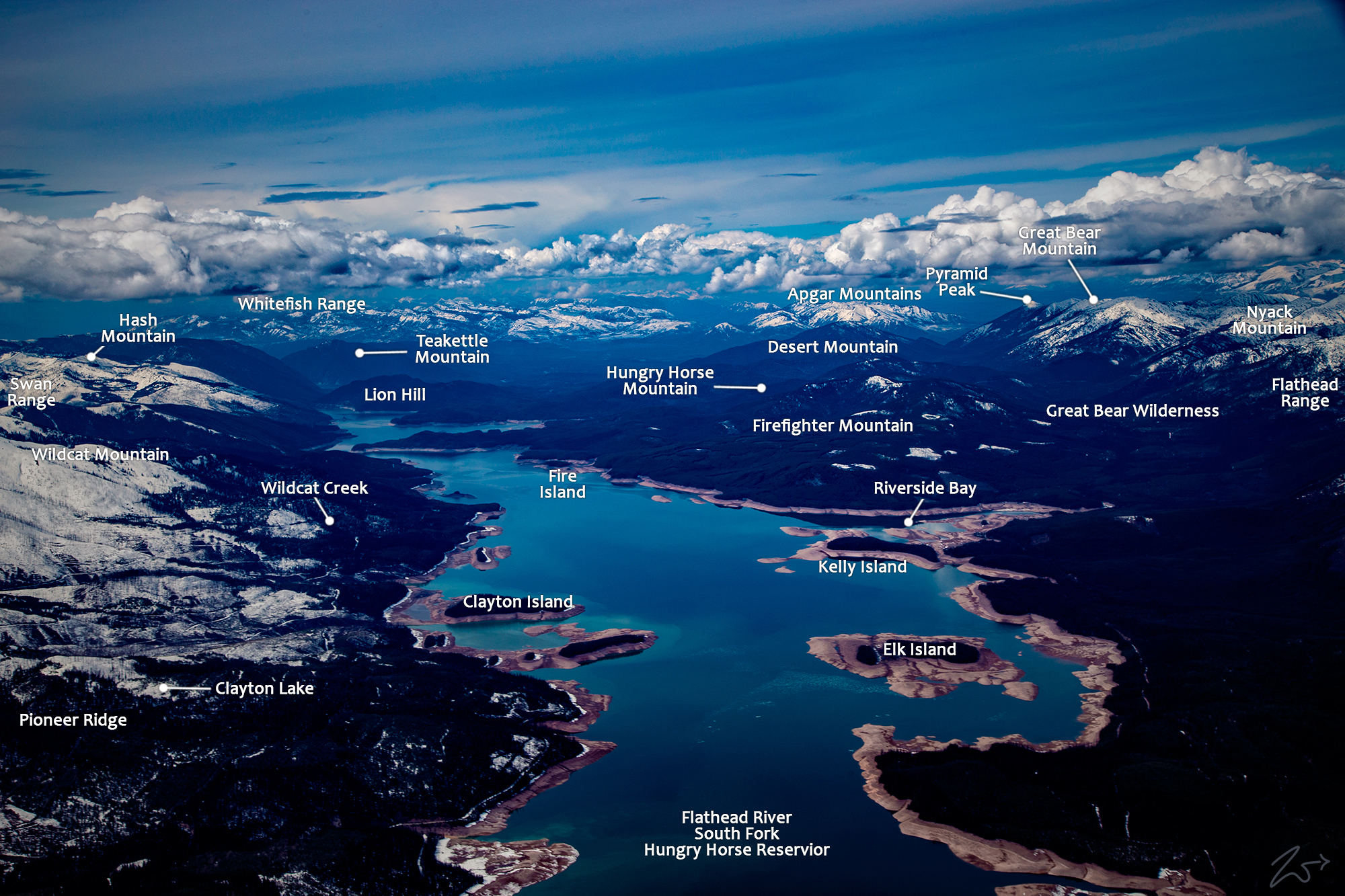 The South Fork of the Flathead River feeds into the Hungry Horse Reservoir in this image looking north towards with the Apgar Mountains alongside the Whitefish and Smokey Mountain Ranges in the distance. In this image captured during the spring after the snowmelt has begun, the water levels have been dropped to allow for the influx of melt runoff which will fill the 1,640 square mile catchment area to capacity. On the left side of the image is Pioneer Ridge and the Swan Mountain Range and on the Flathead Range is on the right side. 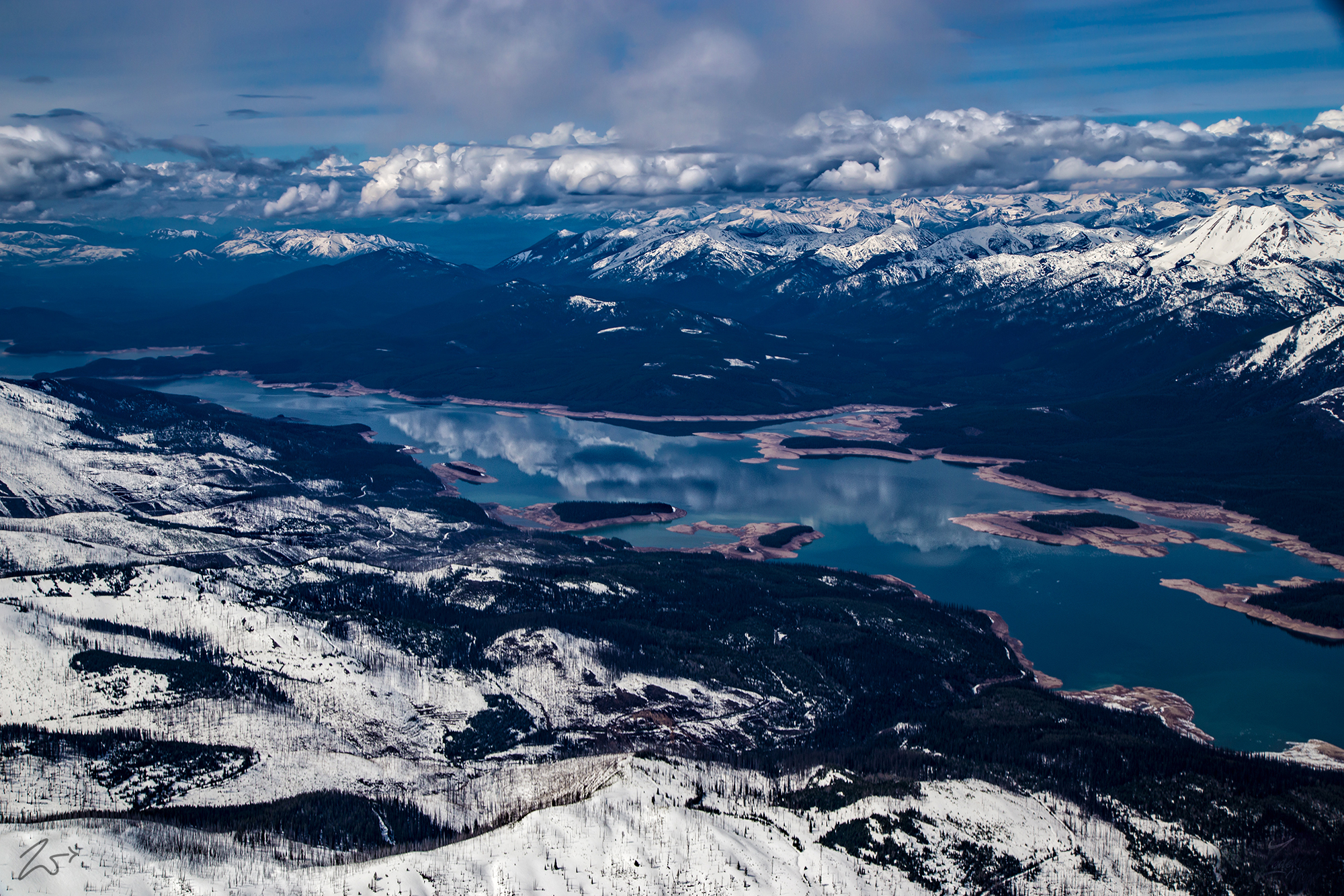 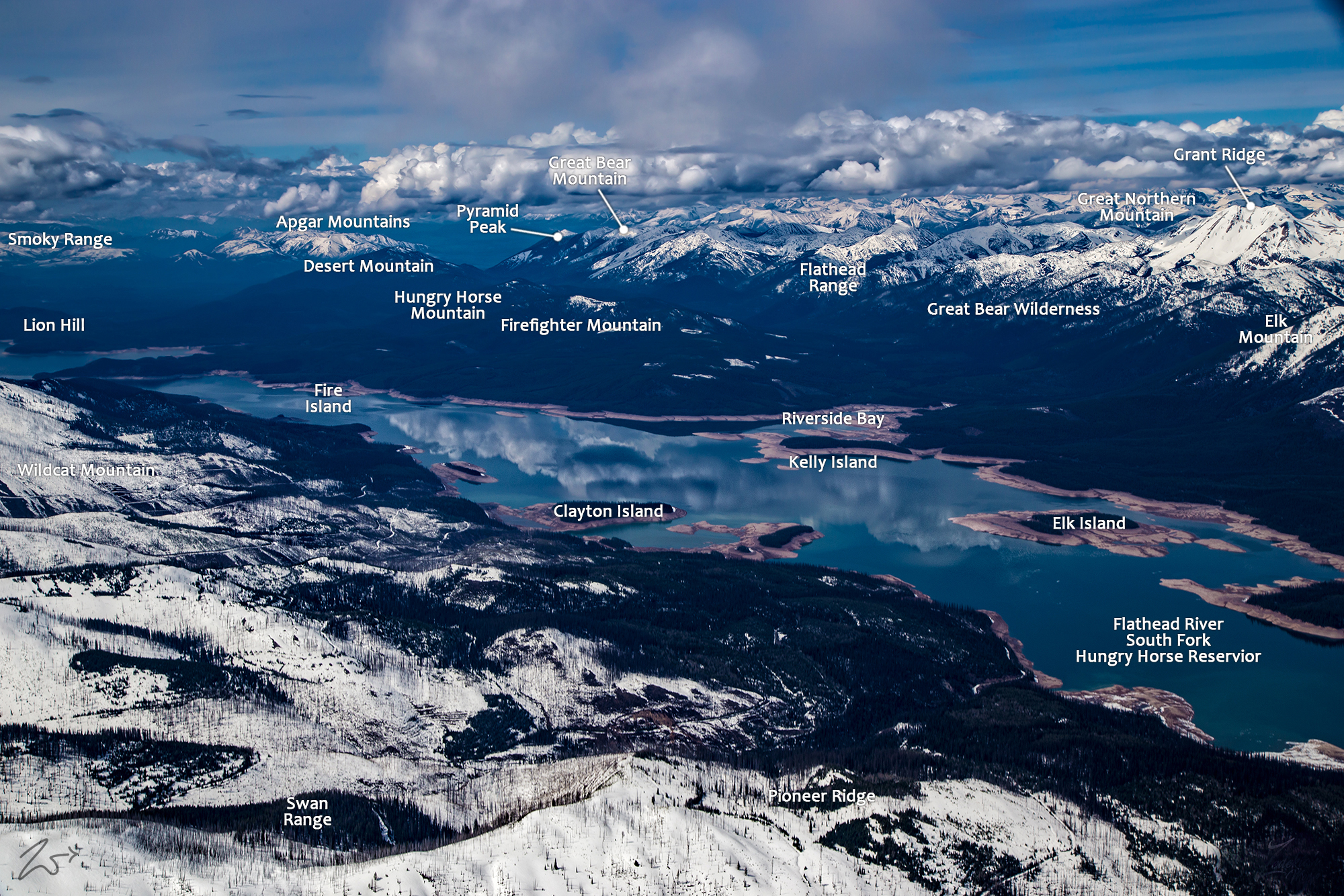 In this scene viewed from above Pioneer Ridge on the eastern slopes of the Swan Range, The South Fork of the Flathead River becomes the Hungry Horse Reservoir. During May, the water has been lowered to allow for the deluge of snowmelt water soon to course down the many creeks, streams, and tributaries, rapidly filling the reservoir. In the distance across the river lays the Flathead Range, on the far right is Elk Mountain and moving left are Mount Murray, Mount Grant, The Great Northern Mountain and at the far end of the river, that mountain without any snow on it is Firefighter Mountain. 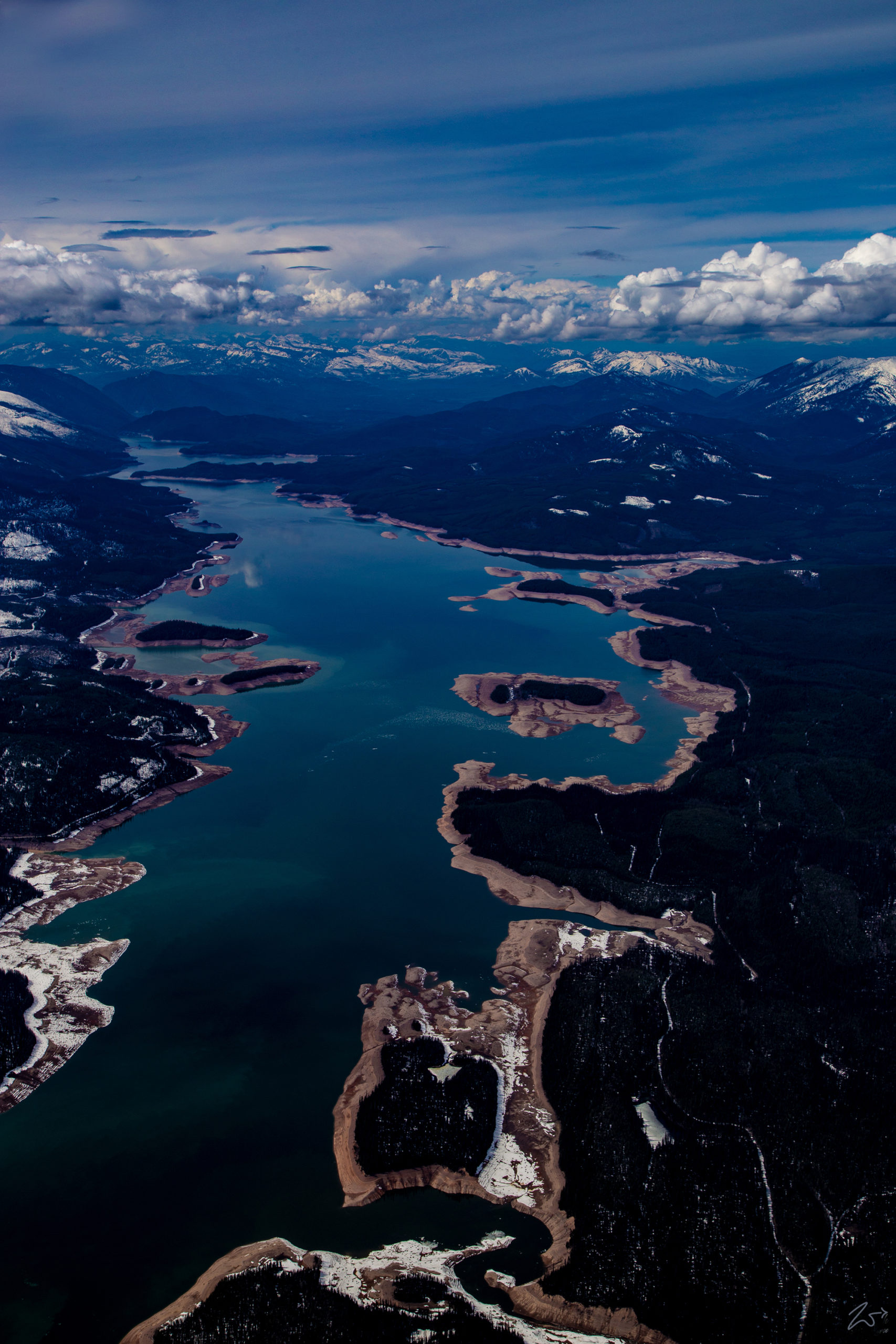 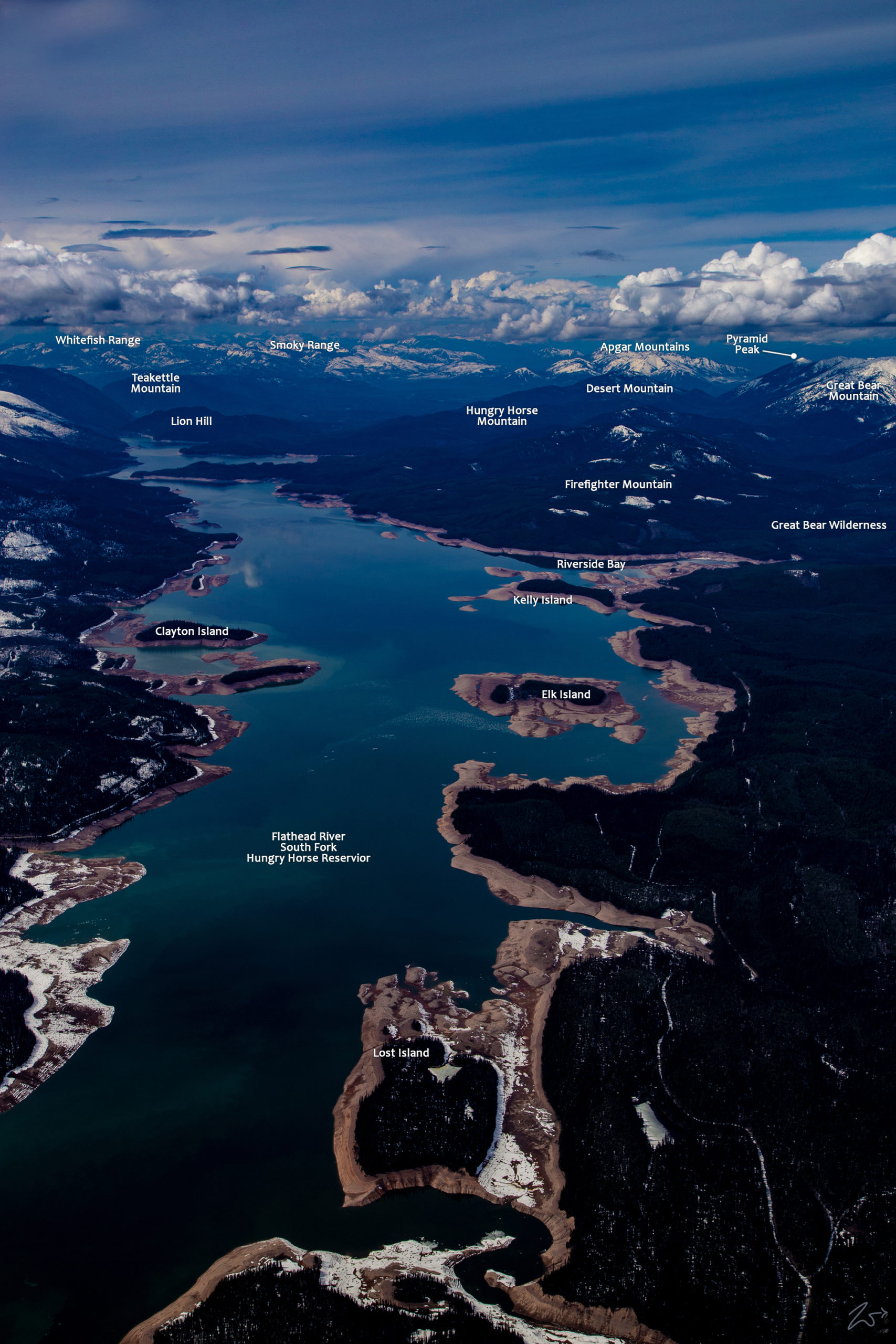 In the image above starting at the bottom right, Lost Island is not much of an island with a land bridge exposed by the lowered water level. Higher up in the image lay Elk Island on the right, Claton Island on the left and Kelly Island on the top right.

The river then enters a narrow gorge, running north, before entering the backwater of Hungry Horse Reservoir. This large reservoir occupies much of the lower half of the river, covering 97 square miles (250 km2). The reservoir trends north then northwest (left in the image), and passes through the arched Hungry Horse Dam. The river then enters a deep narrow gorge and, exiting the canyon for the final time, runs northwest past the town of Hungry Horse before merging with the Middle Fork of the Flathead River. From there it flows around the Swan Range and joins with the North Fork of the Flathead River before flowing through a series of oxbow bends and turns, and finally flows into Flathead Lake.