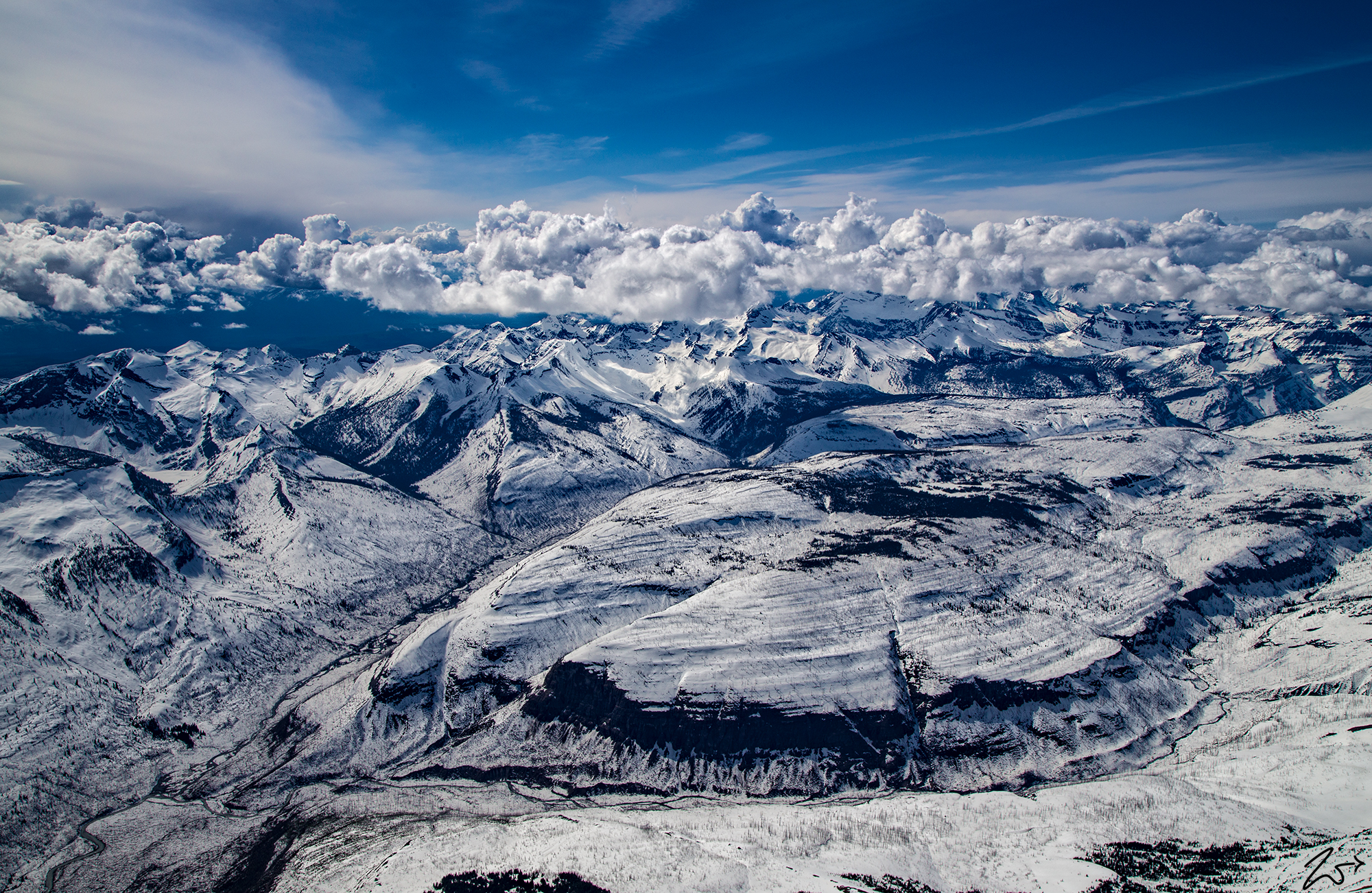 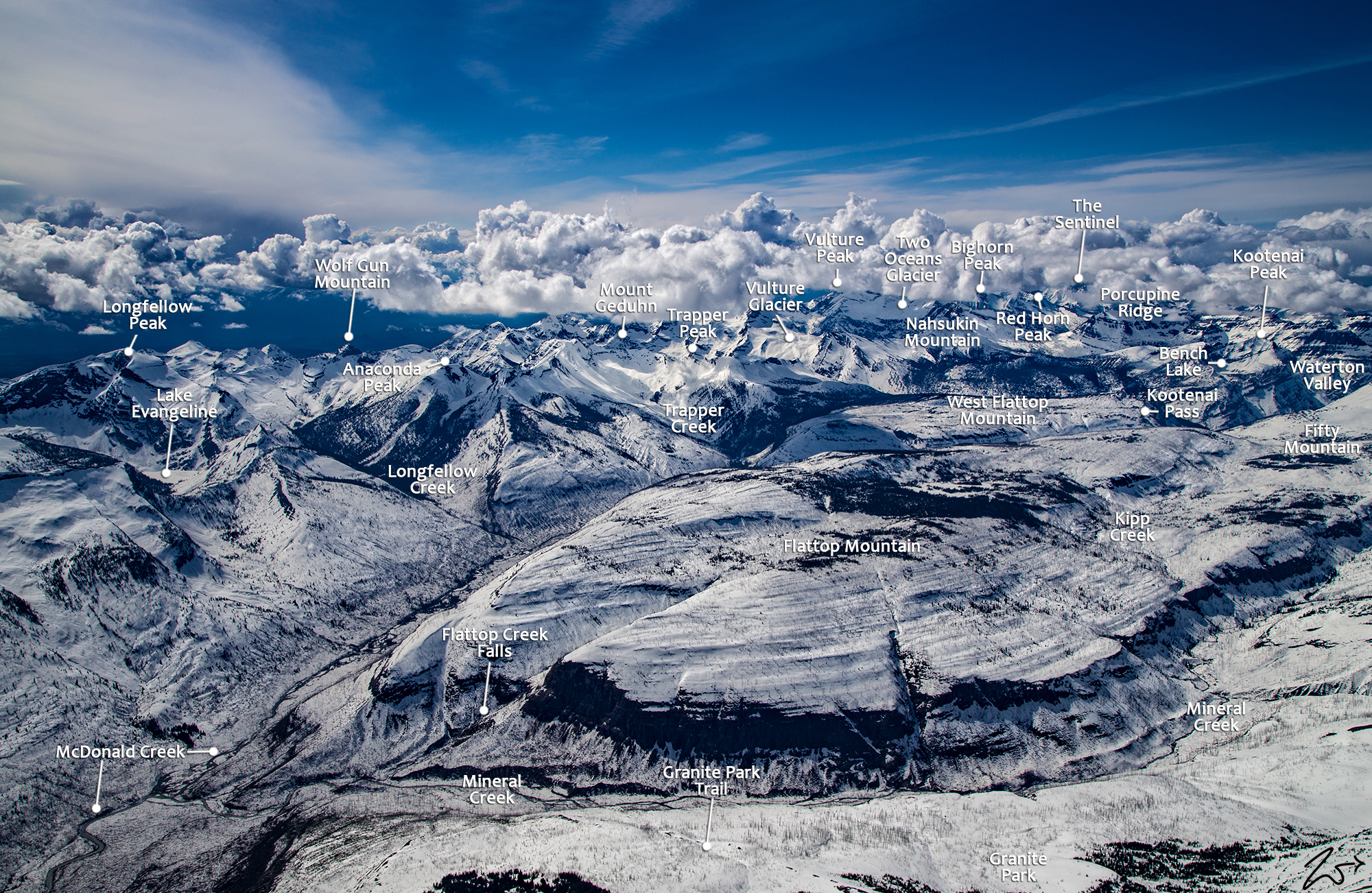 In the image above lensed in Mid May, the huge formation known as Flattop Mountain remains shrouded in its frozen cloak in the middle of a natural slump basin. Laying in the center between the Livingston Range and the Lewis Range, Mineral Creek runs in the lower foreground and merges with McDonald Creek running along on the top left of the formation. To the bottom left where the rivers merge, the now much larger McDonald Creek flows south toward Lake McDonald in the valley down below.Flattop Mountain is one of the most unusual geological formations in the entire Rocky Mountain Range. Like all of the Rockies, the Livingston Range to the west and the Lewis Range to the east were formed by the compression, folding, and thrusting of colliding vastly huge tectonic plates. Yet comparatively, Flattop Mountain is seemingly only a mountain in name, especially when looking at its surroundings! Notably different than the many rugged and jagged peaks that encircle it, Flattop Mountain looks as though it is upside down, resembling the flattened bottom of a giant basin or an inverted mountain!

In this satellite image of the area above, (A) Flattop Mountain is clearly not the same type of rugged peaked mountain formations which are usually associated with the numerous ranges that make up the Rocky Mountains. This huge inverted basin formation actually covers an area from (B) Haystack Butte and Heavens Peak on the south of Flattop Mountain, then crossing the Continental Divide over to (C) Jefferson Pass on the north side, and from the (D) Lewis Range on the east side all the way over to the (E) Livingston Range on the west. With a mean average altitude of 6,500 ft. (1,981 m) and containing numerous small channels and valleys cut into the rock over time by the weathering process of streams and creeks, this was once a flat undulating surface sitting below a giant ocean many millions of years ago.The upper part of McDonald Valley surrounding Flattop Mountain lies in the center of a great synclinal trough, or fold of stratified rock in which the strata slope upward from the axis. This particular trough is called the Akamina Syncline. In the center of this large concave valley sits Flattop Mountain, the upturned beds to its east form the summit of the Lewis Range and those out to the west contain the summit of the Livingston Range.

Instrumental in the formation and preservation of this basin and the mountain wall which surrounds it, this lava bed lies over a very heavy, thick bed of limestone, which passes under Flattop Mountain. The red argillite lying above this heavy bed is somewhat softer, and the bottom of this trough of rock (syncline) has been eroded, forming the topographic basin of Flattop Mountain.  The entire basin sits atop a large sheet of lava that was poured out in a molten condition along the flat floor of the sea or lake in which it erupted.This is the only area of Glacier National Park that has any volcanic activity in its make up, and it was deposited and solidified many millions of years before the mountain-building events occurred. This ancient original sheet of lava covered a large area as large as the entire Glacier National Park, over time many parts were eroded away by the rivers, streams, and creeks, leaving no trace of its former presence. The mountain rocks, together with the bed of lava, were upturned or folded, and now all the beds bend and dip somewhat uniformly in the same direction and at the same angle.

The reason why geologists are so certain that the lava had no connection with the formation of the surrounding mountains is that it came from a volcanic eruption and poured onto either flat desert land or the floor of a lake or ocean, in which, simultaneously, the argillite was being deposited. This occurred countless millions of years before any mountains began forming here. Since that time the sheet of lava was bent and folded uniformly with the layers of limestone and argillite. Evidence of the original surface flows can be found in the vesicular or porous texture, (ropy structures) and long flow lines visible and on Flattop Mountain.

The image above shows the different subsurface geology which makes up Flattop Mountain and the surrounding ranges. (A) Mount Shields Formation (B) Shepard Formation (C) Purcell Lava Bed (D) Snowslip Formation (E) Grinnell Formation (F) Helena Formation  (G) Appekunny Formation (H) Empire Formation. The Rocky Mountains of Glacier National Park are part of a large scale folding and warping actions caused by numerous factors such as tectonic plate movement, upthrusting and immense pressure on the different substrate.Anticlines are folds in which each half of the fold dips away from the crest.  Synclines are folds in which each half of the fold dips toward the trough of the fold.  The difference is notable in that anticlines form an “A” shape, and synclines form the bottom of an “S.” The image below is a deep cross-section of the earth running longitudinally from Huckleberry Mountain on the west of the North Fork Valley all the way to Sherburne Peak above Saint Mark Lake on the eastern side of the Lewis Range of the Rocky Mountains. Illustrated are the many thrusts and faults which have caused the mountains to form in their original shapes. Huckleberry Mountain far to the west is made of the same material that Flattop Mountain is made from, and both the Livingston Range and the Lewis Range share similar geologic composition as well.

Another major contributing factor to the current shape of Flattop Mountain and the jagged peaks of the surrounding ranges is the long term pressures exerted over time by the Ice Age and the movements of so many glaciers which had a dramatic impact on all of these formations. The Penultimate defining geological event that shaped these mountains started with a global cooling trend around 2 million years ago. During this long period of continuous cold, gigantic ice sheets formed, advanced and retreated repeatedly all across the temperate regions across the North American Continent. This lasted until about 12,000 years ago around Flattop Mountain and the surrounding ranges when the 1 mile-thick glaciers finally melted for good.During these glacial times with the ice thickness being so high, the lower valleys were filled solid with ice and only the very tops of the highest peaks were visible. Long “rivers of ice” moving back and forth sculpted the mountains and valleys into a variety of landforms associated with major alpine and valley glacial action. This entire landscape was carved into the archetypal craggy and rugged shapes which make up the mountains and valleys; Massive u-shaped valleys, the numerous cirque lakes (or tarns), the magnificent towering horns, cols, moraines, and saw-toothed aretes such as the Garden Wall and Ptarmigan Wall are visible signs from this glacial activity. 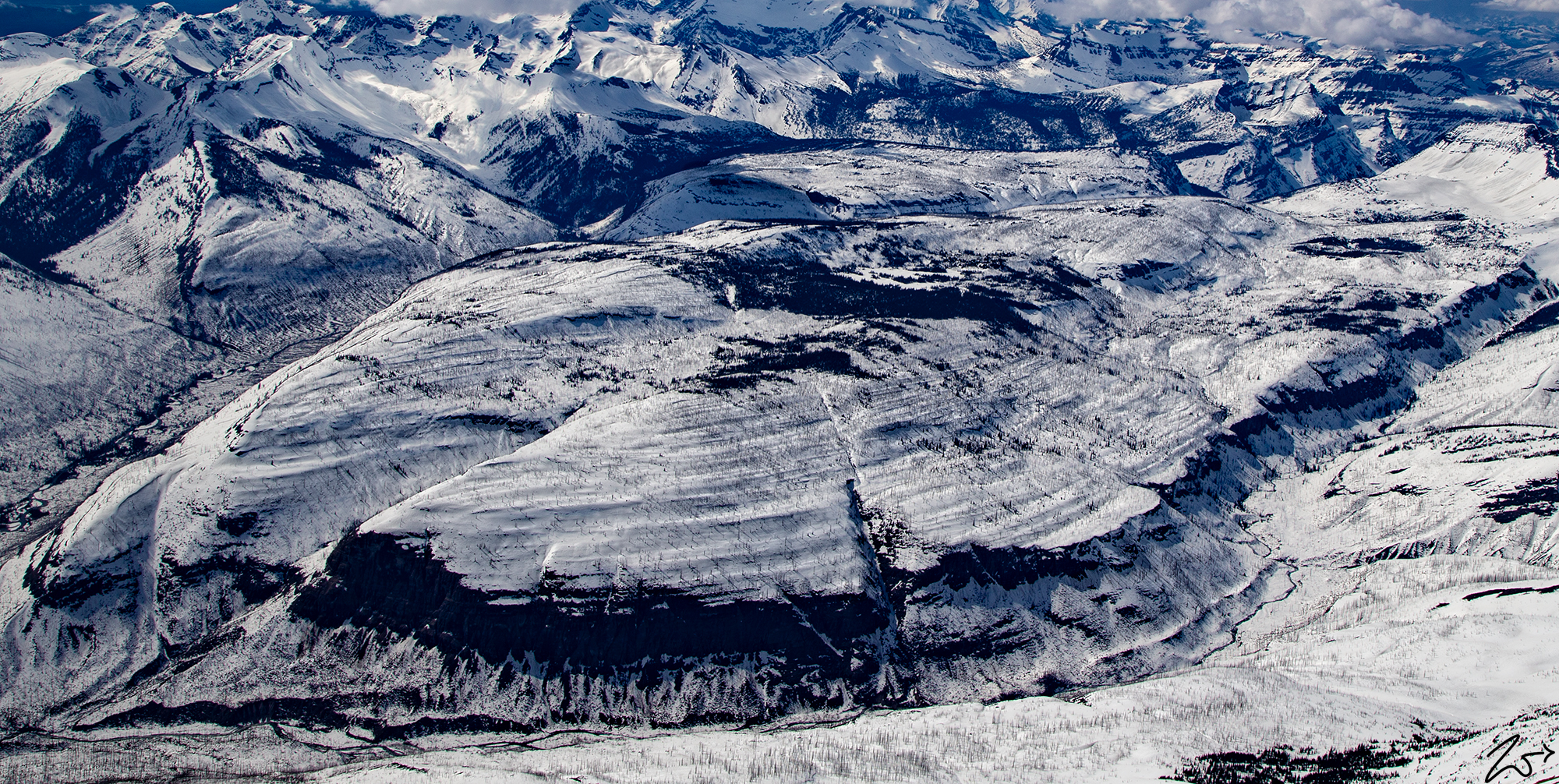 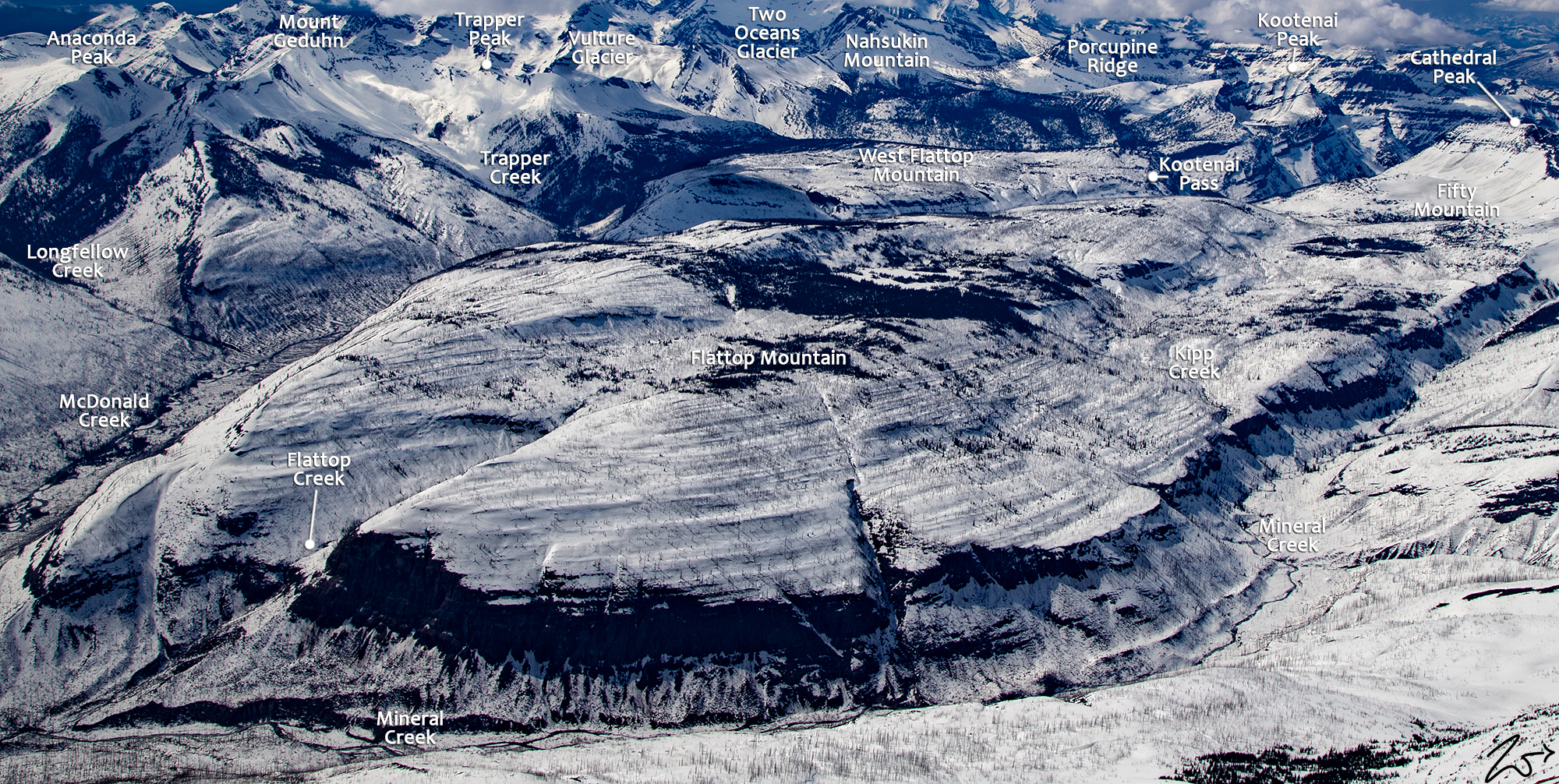 In the image above of Flattop Mountain, note the long striated lines cut horizontally around the mountainside. These are the remnants of glacial action from deep rivers of ice which moved heavily across the surface, using the weight of the massive ice flow to carry rock and other dense debris along the bottom of the glacier which slowly carved these mountains into these rocky, rough mountains.In the image below of the northeastern side of Flattop Mountain, Cathedral Peak is the first large Mountain to the right of Flattop, and along that long wall are Shepard Glacier, Chaney Glacier and Ipasha Glacier in the lower right side of the image.

The following is a poster of this location, available via our online Gear store. Click on the image to go to the store and get this informational poster for yourself. Great for home, office, or classroom. 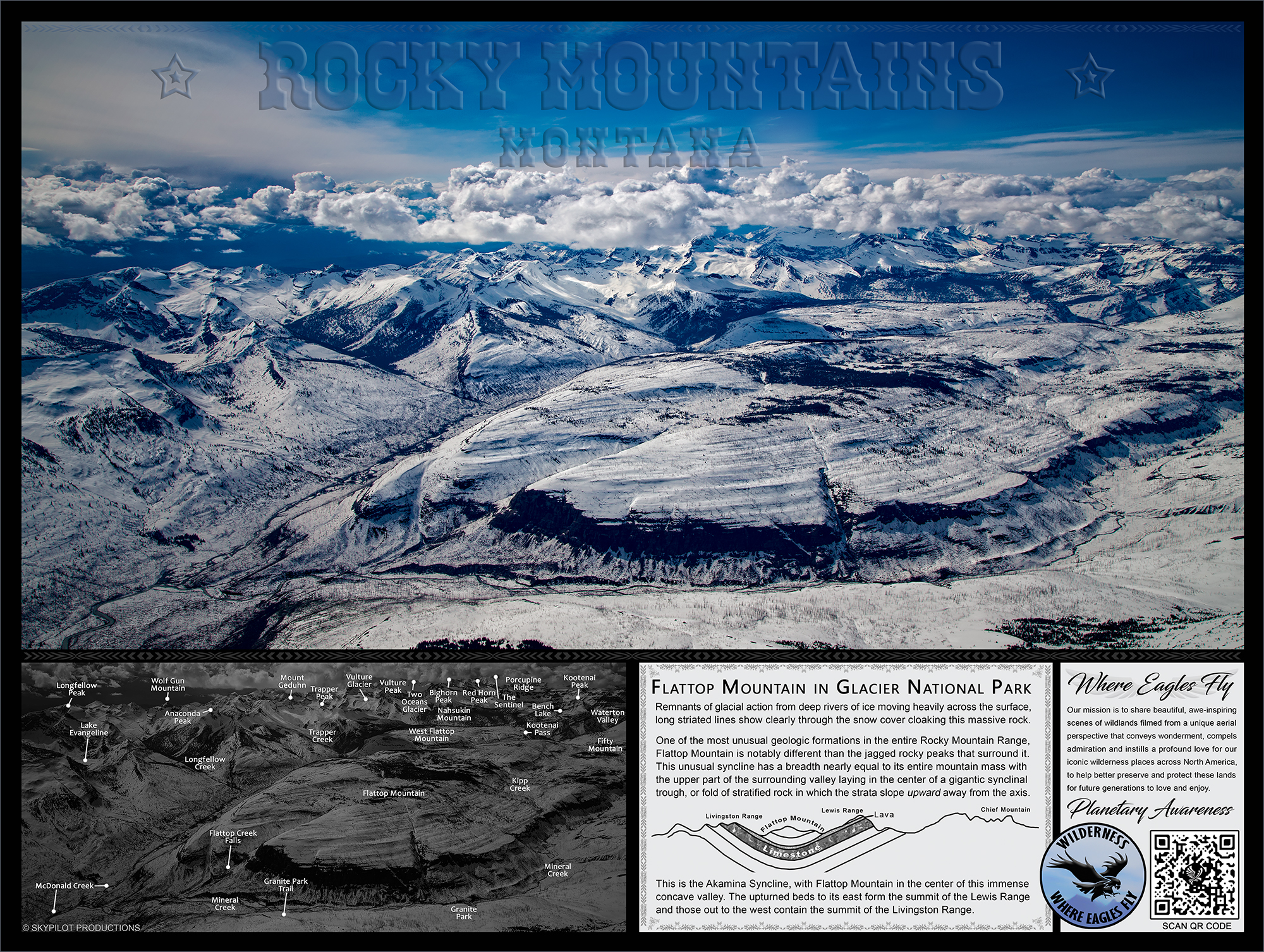