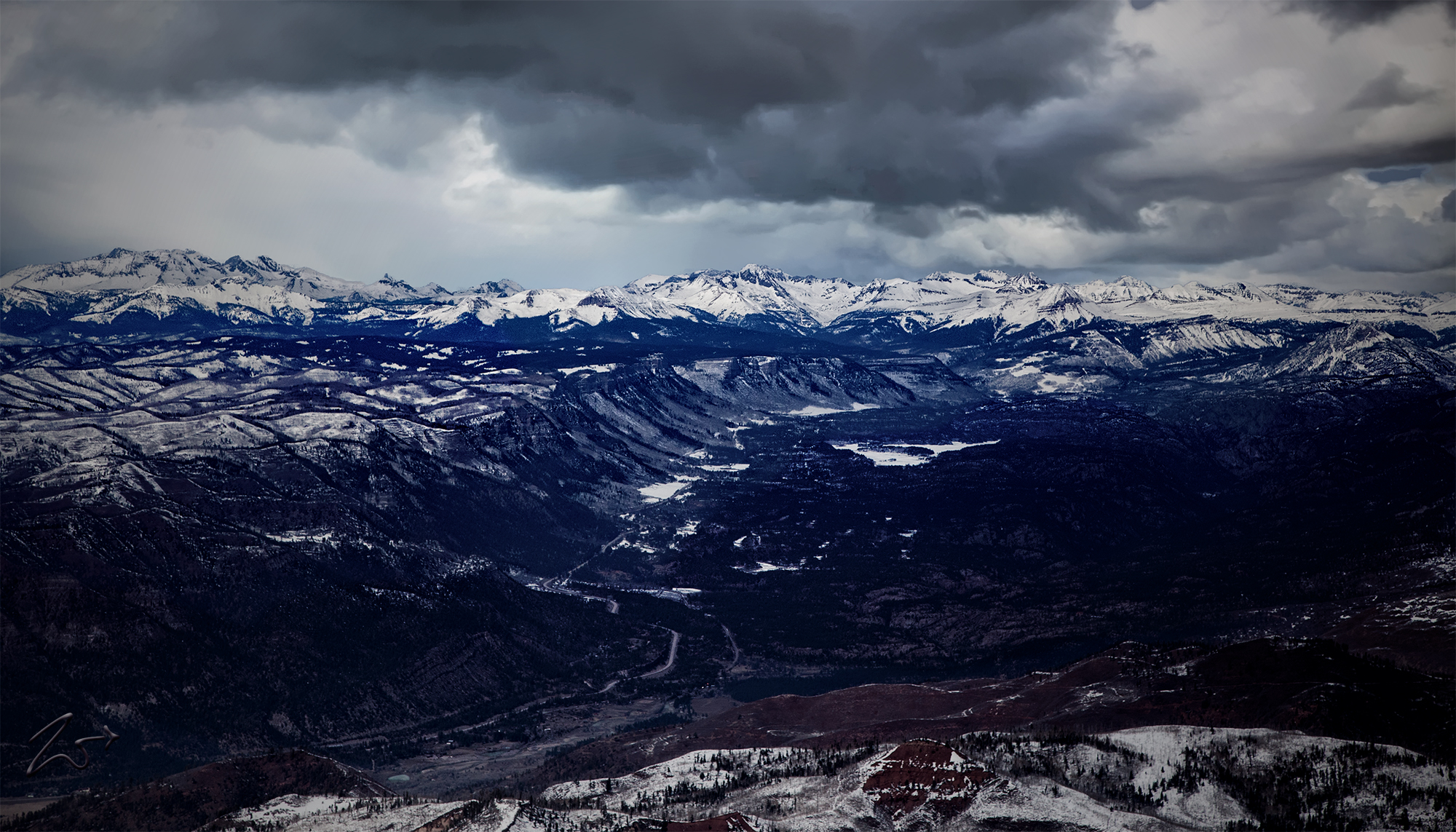 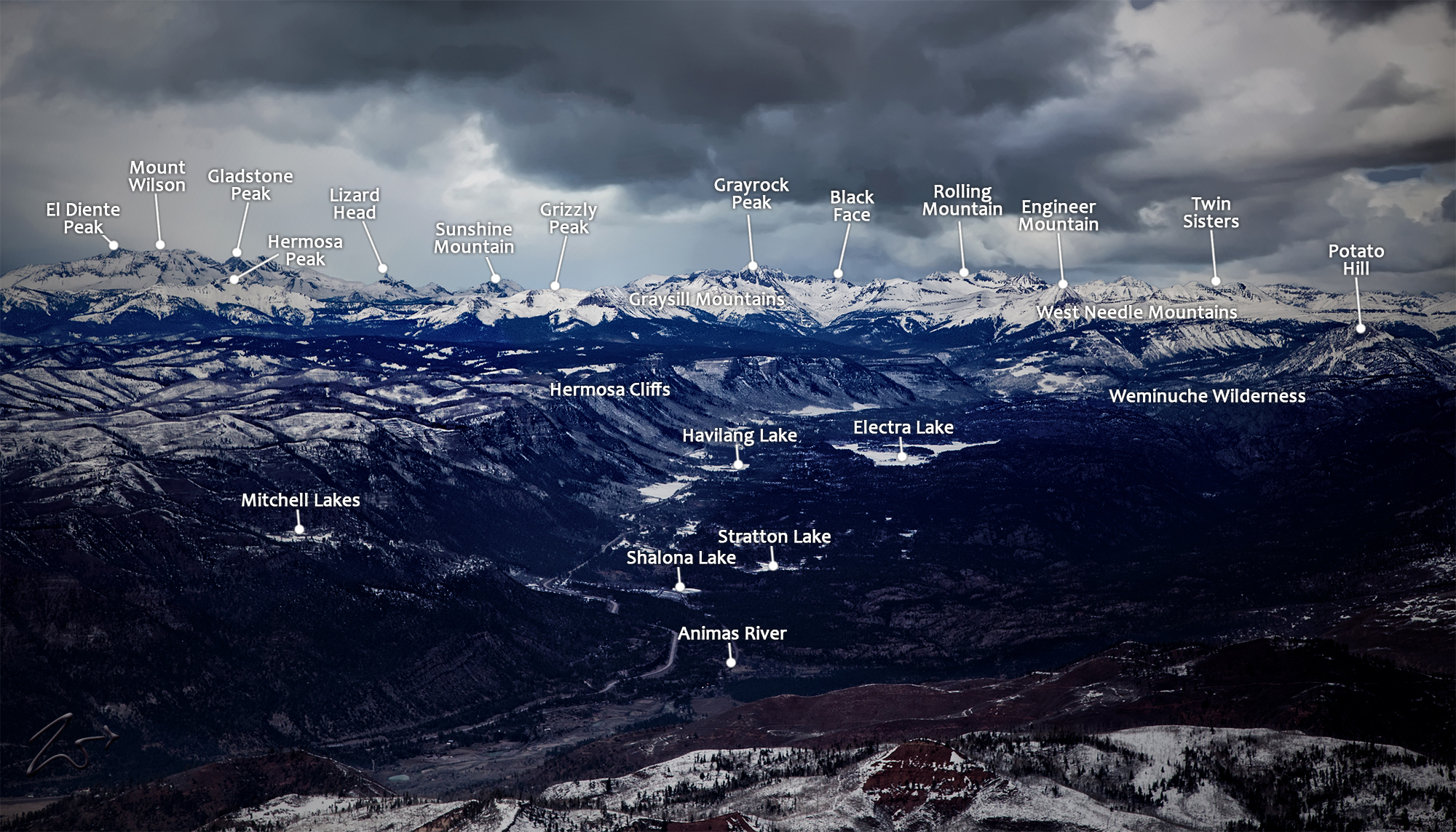 The Hermosa Cliffs overlook Electra Lake north of Hermosa, Colorado. From the left side of this image on the horizon is Mt. Wilson with El Diente Peak, Gladstone Peak, and Wilson Peak. Sitting below Mt. Wilson closer to us in this image is Graysill Mountain. Following the chain of mountain peaks on the horizon moving right we see Sunshine Mountain, Grizzly Peak, San Miguel Peak, Rolling Mountain, Engineer Peak, The Twin Sisters Peaks, and Bear Mountain.

Zedekiah: “In the immediate foreground is Baldy Mountain and below that is Spud Hill. I am flying directly above Missionary Ridge and shooting to the north, while Durango, Colorado is behind me to the south a few miles. Down in the valley below flows the Animus River, fed by numerous small creeks and washes and Electra Lake. To the right of Electra Lake lay the West Needle Mountains in the Weminuche Wilderness.”

Located 25 miles north of Durango, Electra Lake is a manmade off-stream reservoir that is fed by waters from Cascade Creek, Little Cascade Creek, and Elbert Creek. The original Electra Lake Dam was a 400-foot rock and timber crib with a wooden face, constructed from 1905-06. It was upgraded to the current structure in 1980.

Originally called Ignacio Lakes, it was renamed Electra, a character in Greek mythology because the water was used downstream to create electricity. Water is channeled from the lake 18 miles downstream to the Tacoma Hydro Generating Station via a 4400-foot open wooden flume, one of the two remaining wooden flumes still operating on hydro projects in the U.S.

This valley and river were used seasonally for over two thousand years by the First Nations Utes, who lived and ranged in the mountains and desert over much of the Colorado Plateau: much of present-day eastern Utah, western Colorado, northern Arizona and northwestern New Mexico. The Ute people were hunters and gatherers who moved on foot to hunting grounds and gathering land based upon the season.

In the bottom of the valley here in this photo you can see the old train track from the Durango & Silverton Narrow Gauge Railroad (D&SNG), a 3ft / 914mm narrow gauge heritage-railroad that operates 45.2 miles / 72.7 km of track between Durango and Silverton, Colorado. The route was opened in 1882 by the Denver & Rio Grande Railway (D&RG) to transport silver and gold mined up in the San Juan Mountains.

The railway is a federally designated National Historic Landmark and has operated continuously since 1881, although it is now a tourist and heritage line hauling passengers, and is one of the few places in the U.S. which has seen continuous use of steam locomotives.