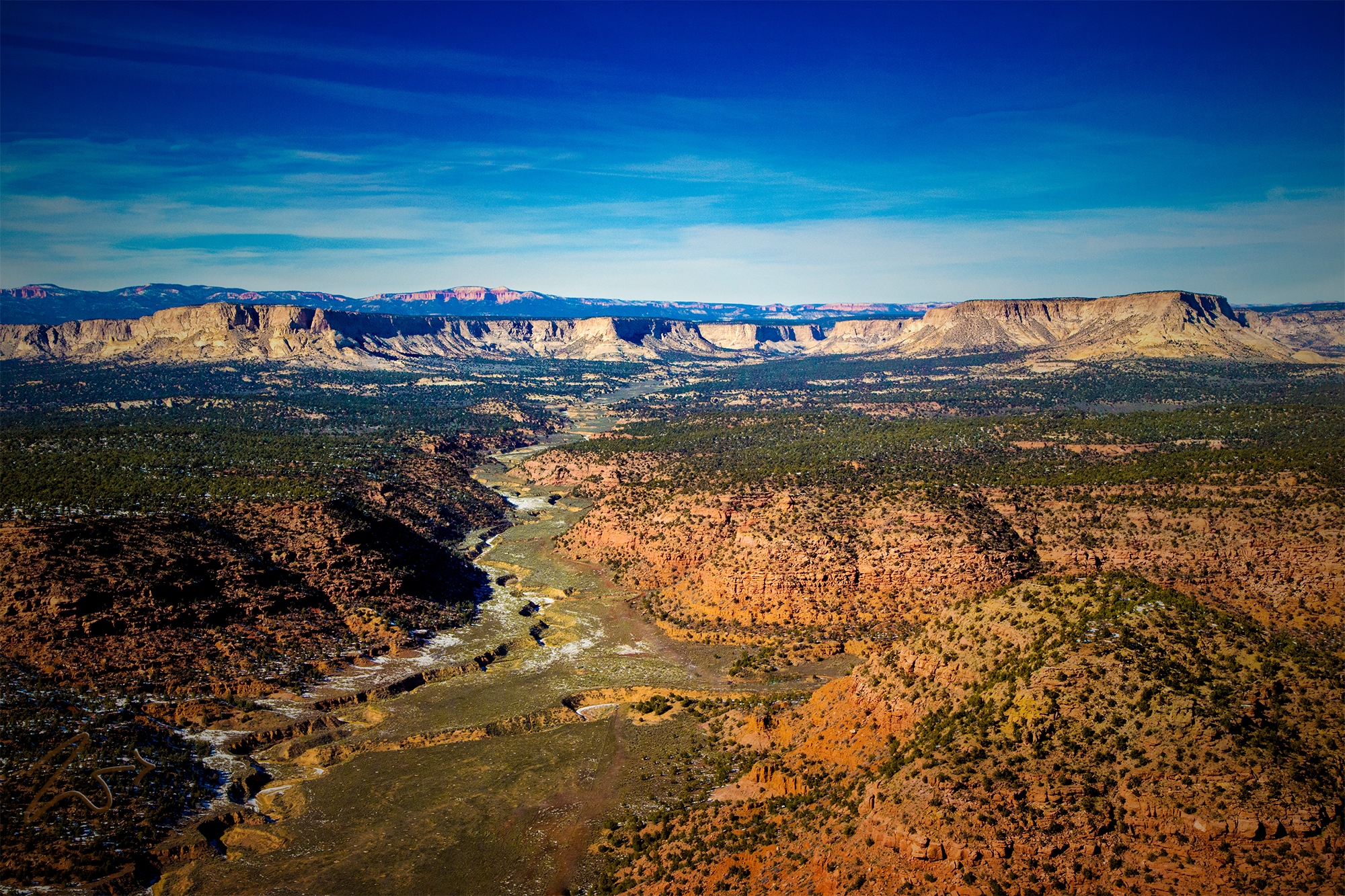 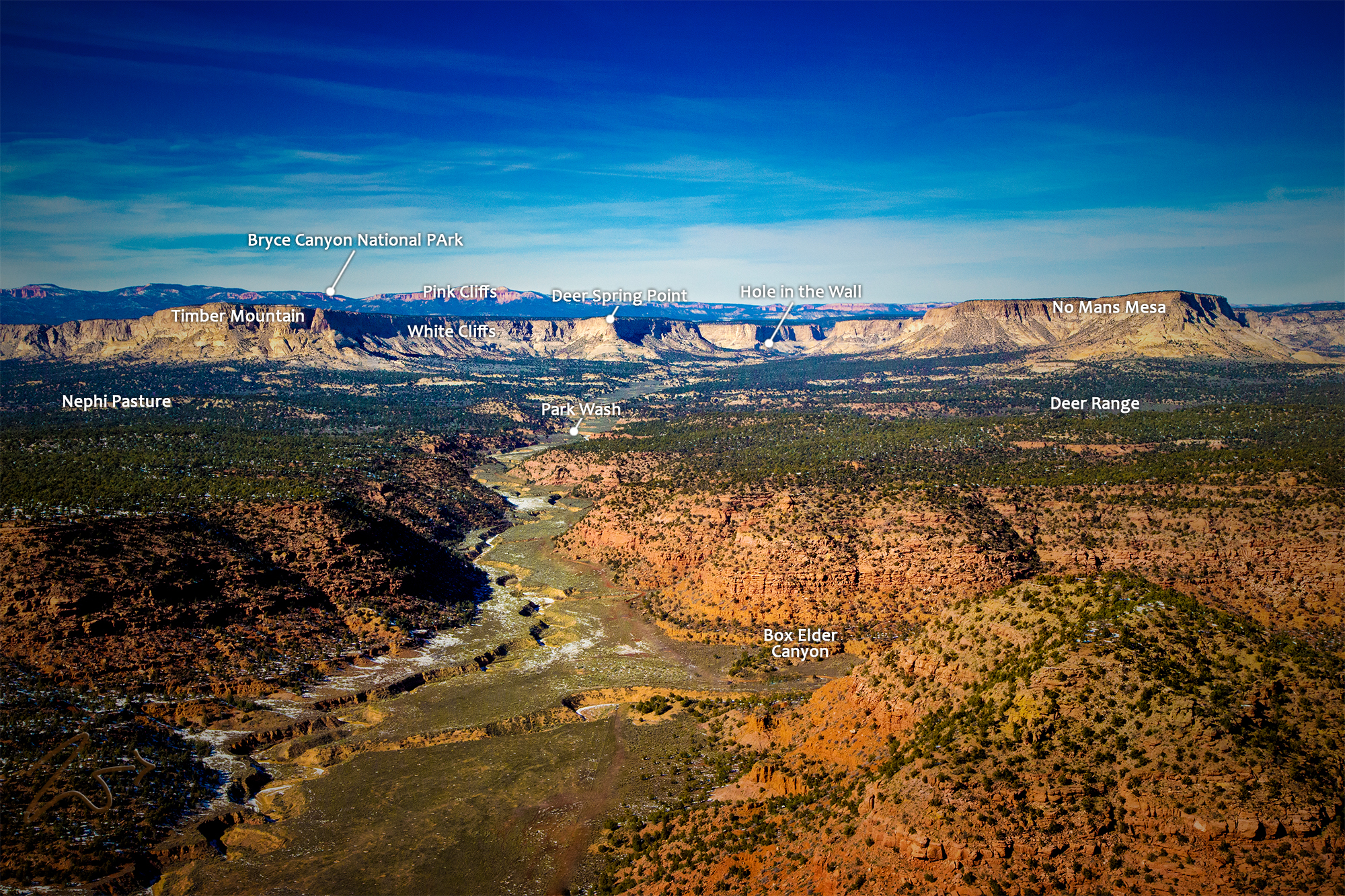 This is the small river that comes down from Bryce Canyon National Park through the White Cliffs “Hole in the Wall” pass between No Mans Mesa, Calf Pasture Point, and Deer Spring Point. Called Park Wash, this small river joins up with Deer Springs Wash at Kitchen Corral Point and becomes the Kitchen Corral Wash as it passes through the Vermilion Cliffs in the Escalante Grand Staircase National Monument. The small canyon on the immediate right in the foreground is called Box Elder Canyon and the area around it is known as Deer Range.

This area was the ancestral home to many Tribal Nations throughout time and this particular part of the Park Wash River was home to the buried ruins of a small village that lay in the foreground of this picture, right along the riverbank. This small river flows down from Bryce Canyon, whose pink Hoodoo cliff formations are visible along the distant horizon. These buried ruins along the river banks are from a very old people known as the Ancient Anasazi, with is First Nations Diné for the; “Old Ones“.

For First Nations Tribes this particular location where all the small rivers came together, was suitable for both short-term resource procurement camps and year-round settlements. Given the presence of an early “pithouse – like” structure in the Late Archaic level, the site probably represents the latter. Studies are beginning to indicate these were probably what is know as the “Virgin (River) Anasazi” Culture or at least part of the Ancestral Puebloan.

In this area, they have found many dwellings and artifacts that show this small valley was farmed and hunted in for many thousands of years. The small river running up through the image is called Park Wash. At the bottom of the image where the river branches off to the right at Box Elder Canyon, do you notice that small area of land between the two branches of the river? That is the location of one of the Ancient Anasazi Dwellings. An interesting historical fact about these White Cliffs is their association as a hideout for an outlaw from the wild west era by the name of Robert Leroy Parker, but better known to popular culture as Butch Cassidy of the Butch Cassidy and the Sundance Kid fame. Their gang was known as the Wild Bunch.

Butch grew up in Circleville, Utah, about 30 miles or so to the east of this location. And he knew this place like the back of his hand as he had worked as a cowboy around the area all through his youth. When he turned to crime and began a career as a cattle rustler (he was a teenager at this point) he would use this area to hide from the various posse’s and lawmen hunting him. After he grew into a full-fledged outlaw, he joined forces with Harry Alonzo Longabaugh a.k.a. the Sundance Kid and formed one of the most infamous outlaw gangs in the wild west; The Wild Bunch.

The Wild Bunch Gang had a couple of interesting facts that they were known for at the time; they claimed to make every attempt to abstain from killing people, and Cassidy boasted of having never killed a single man or woman in his entire career. And the gang was closely associated with female outlaws Ann Bassett and Josie Bassett, whose ranch near Browns Park supplied the gang often with fresh horses and beef.

Both Bassett girls would become romantically involved with several members of the gang, and both would occasionally accompany the gang to another of their remote hideouts, called “Robbers Roost”, which was only a few miles from this one.

Another thing that was rather unusual was that Butch Cassidy and his gang were well liked by the public in this area. Associations with local ranchers allowed the gang considerable mobility, giving them an easy resupply of fresh horses and supplies, and a place to hole up for a night or two.