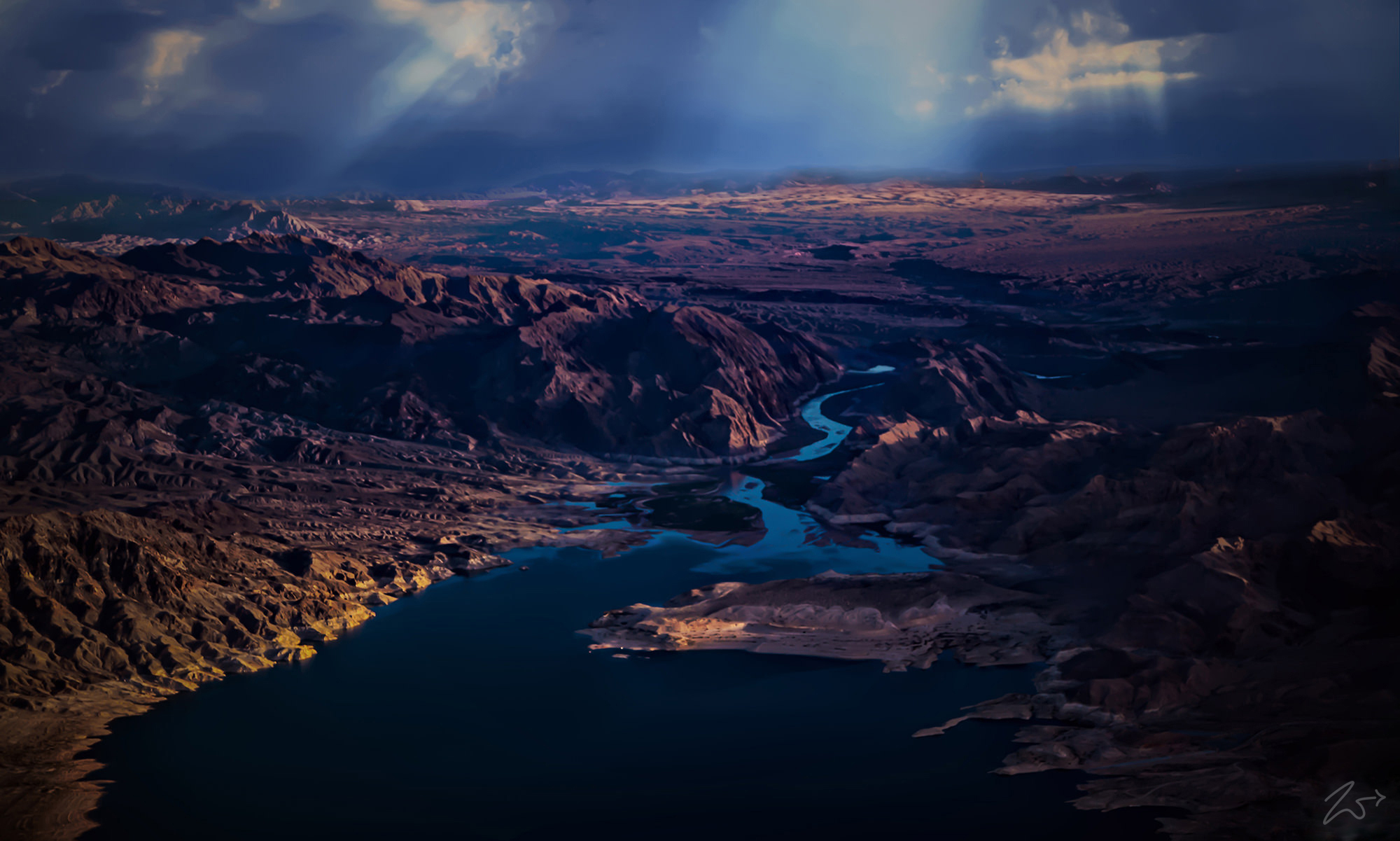 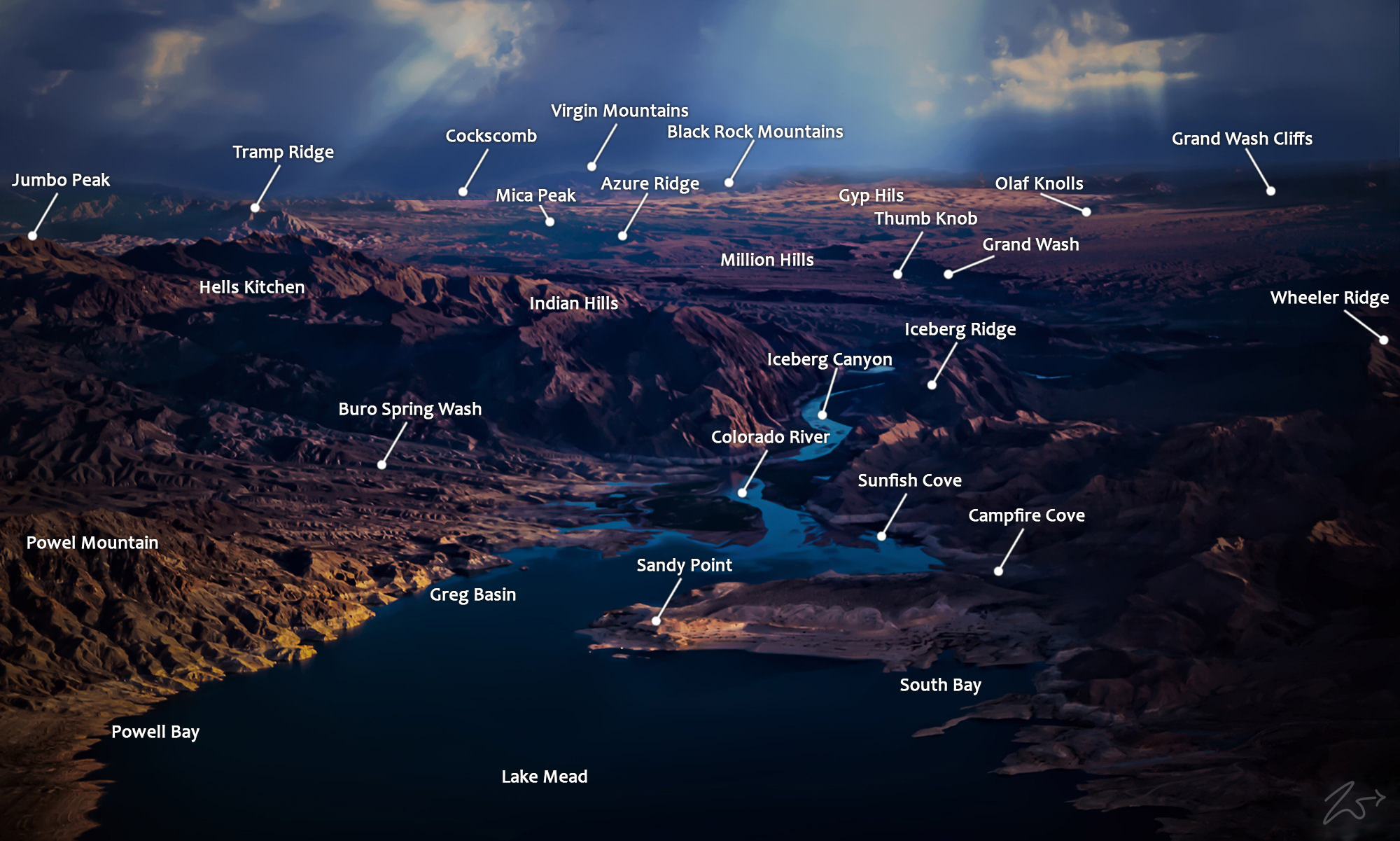 This is the Colorado River exiting the Grand Canyon through Iceberg Canyon into Lake Mead in the Gregg Basin. In Spanish: Río Colorado, means “Colored River“, with an implication of the natural reddish, muddy color the river used to have that caused by its natural sediment loads. After multiple dams were built to harness power and control seasonal flooding (still controversial after many decades) the upstream silt is filtered out by the dams and no longer seen as muddy or colored but instead has acquired the clear blue-greenish hue seen here.

Zedekiah: “Following a great rainstorm I captured this image while flying northeast over the Gregg Basin on my way to Grand Canyon Gulch. With sunlight streaming through skies darkened from the thick storm clouds, nature paints a brilliant palette juxtaposing the rich copper reddish colors against the deep blue hues of the river as it passes Devils Cove and the Iceberg Reef through Iceberg Rapids and Sunfish Cove and around Sandy Point into Lake Mead.”

One of the principal rivers of the Southwestern United States and northern Mexico, the 1,450-mile-long (2,330 km) Colorado River drains an expansive, arid watershed that encompasses parts of seven U.S. and two Mexican states. With its headwaters located high up in the central Rocky Mountains in the U.S., the river flows primarily southwest crossing the Colorado Plateau and into the Grand Canyon before reaching Lake Mead on the Arizona–Nevada border. Here it sharply turns south towards Mexico where it runs through the mostly dry Colorado River Delta at the tip of the Gulf of California between Baja, California, and Sonora. 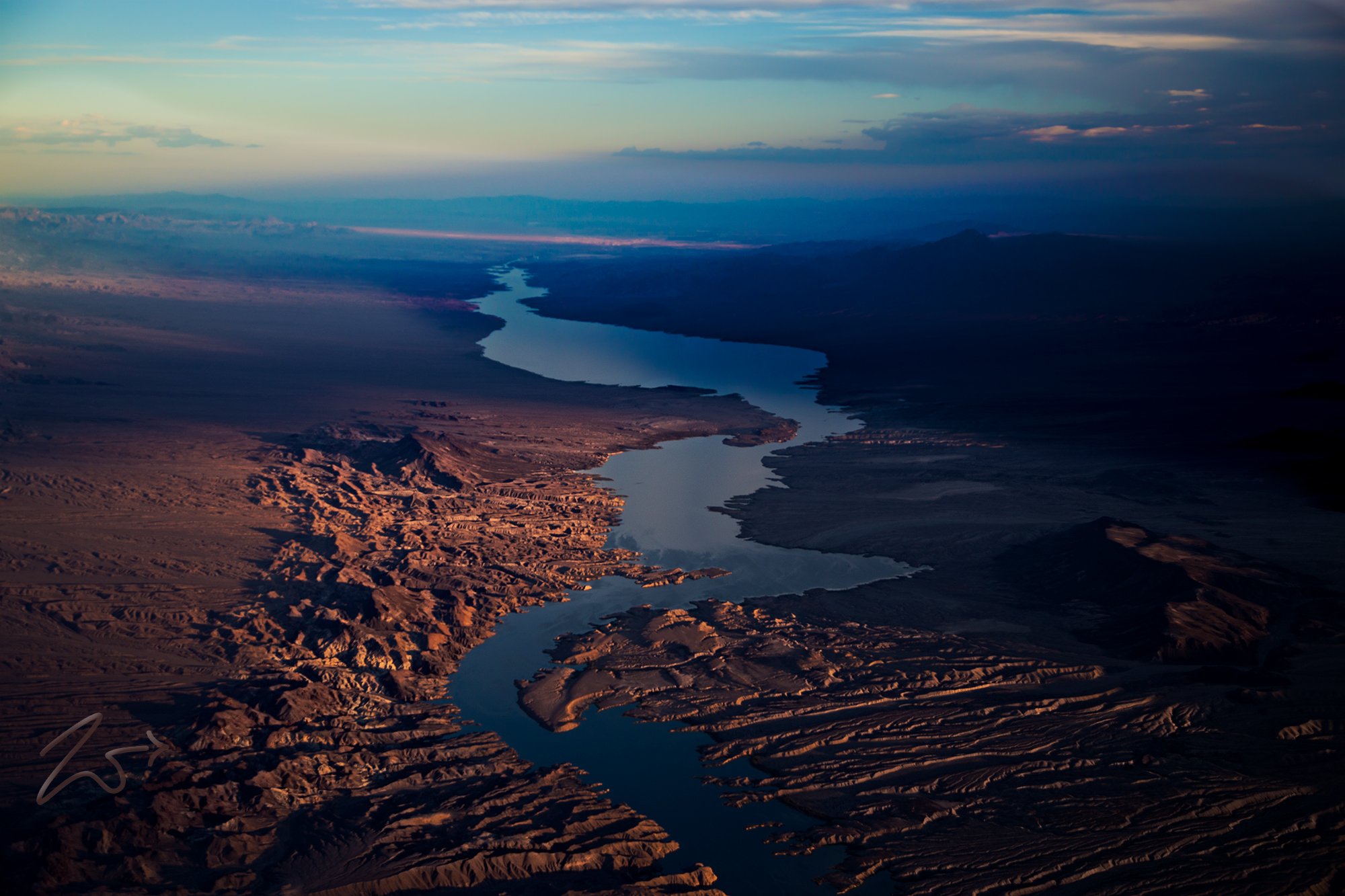 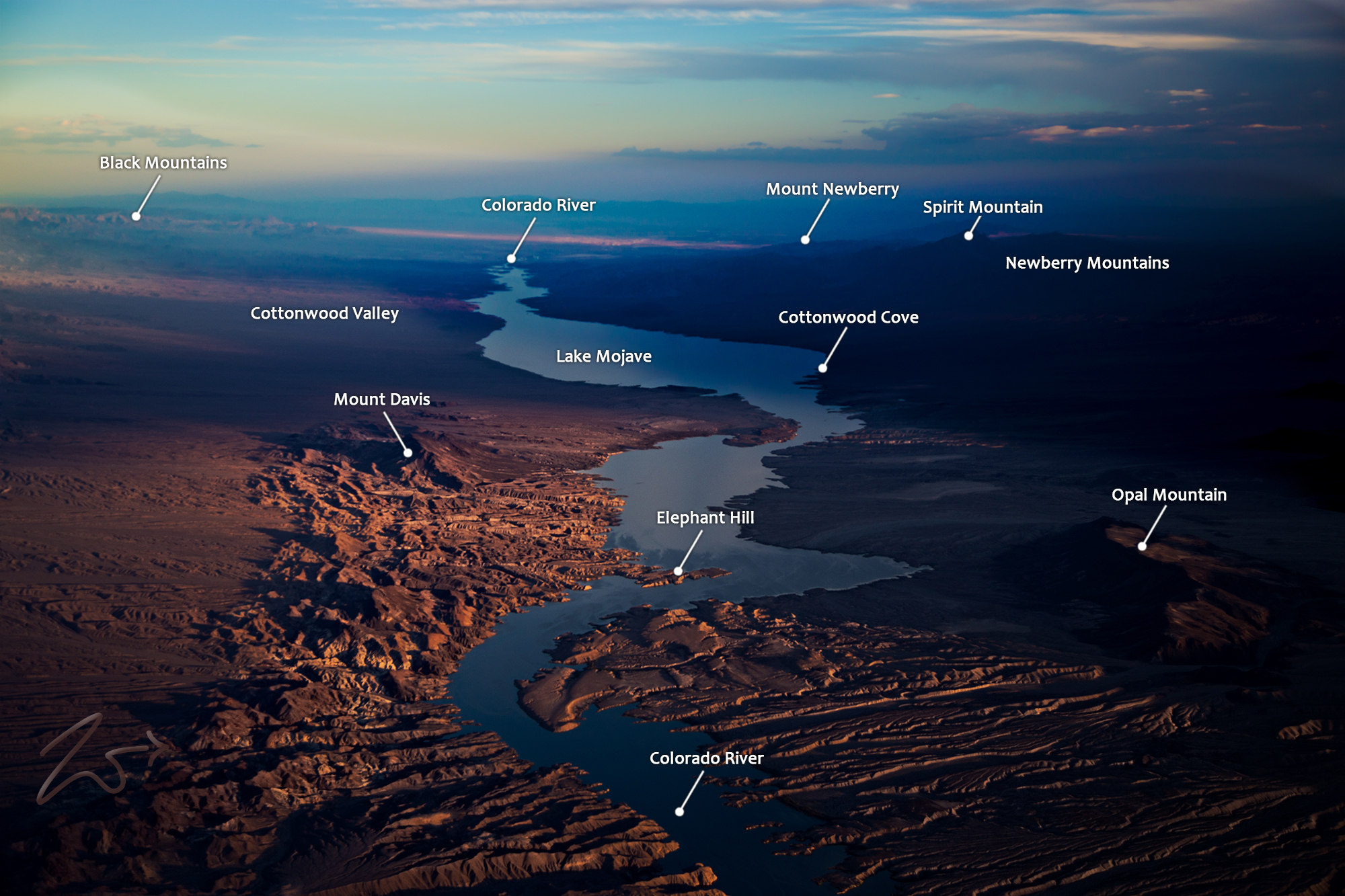 Cutting its way through the western landscape over millions of years the Colorado River is iconic, synonymous with the historical natural heritage of the North American Continent. These photographs taken at various times of the day in different seasons, show the river as it serpentinely twists and turns through the harsh canyons along the border of Arizona and Nevada. These lands are harsh and difficult but stark as they may seem they present a wonderful tapestry of color and texture; beautiful reminders of the diversity of shapes, colors, and the natural creativity of our wondrous planet.

In this first image, taken late in the afternoon at dusk, Alpenglow spreads streaks of light through the mountains in the west (to the right in this image) casting long shadow fingers across the rippled desert of Black Canyon and the Colorado River. In the distance to the middle left in this image, where the river widens, is Lake Mojave.

An interesting fact is that before the Gulf of California was formed (where the Colorado River currently empties into) around 12 to 5 million years ago, the Colorado River flowed due west all the way to empty into the Pacific Ocean, they are not certain exactly where – possibly Monterey Bay on the Central California coast, forming the Monterey submarine canyon. 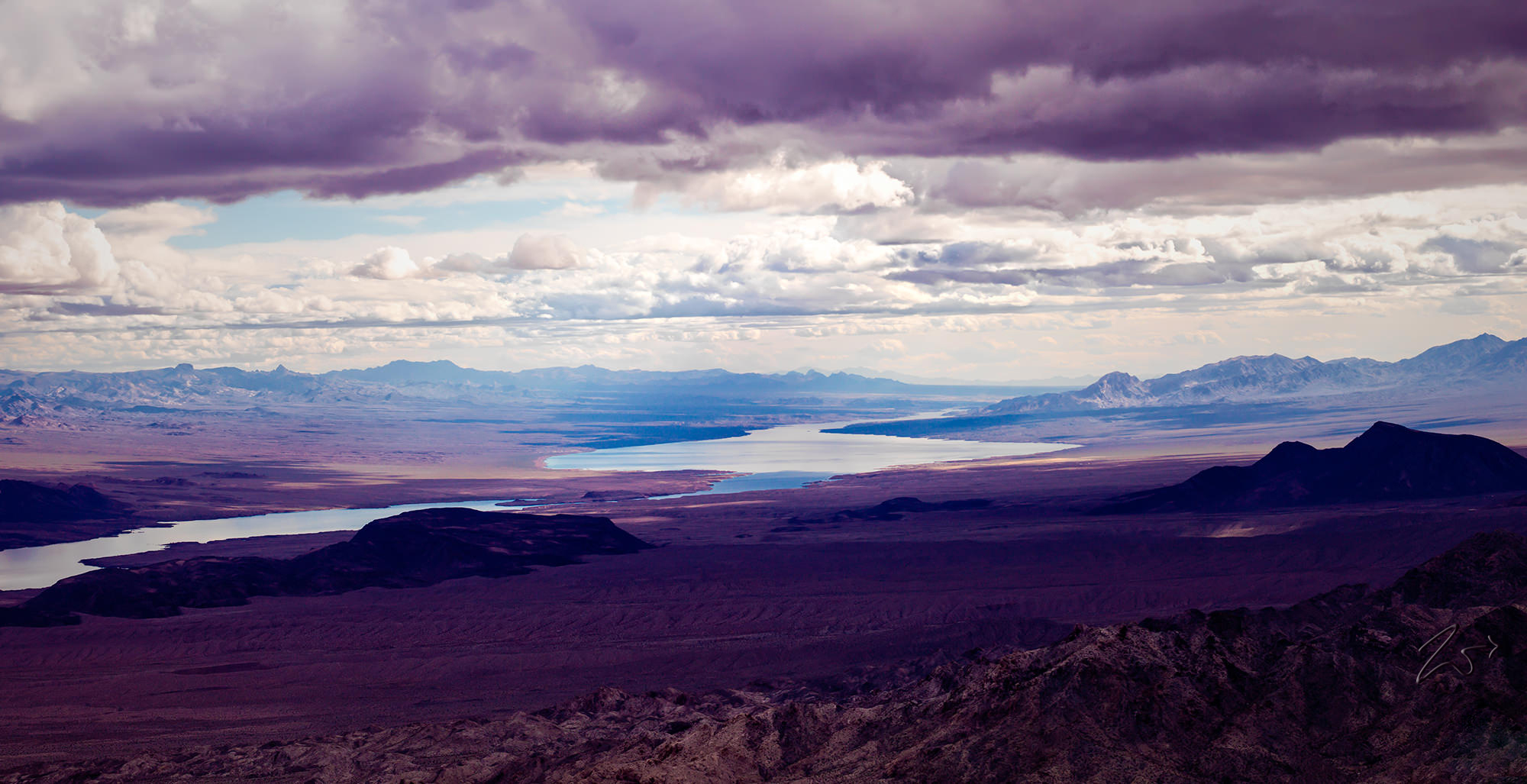 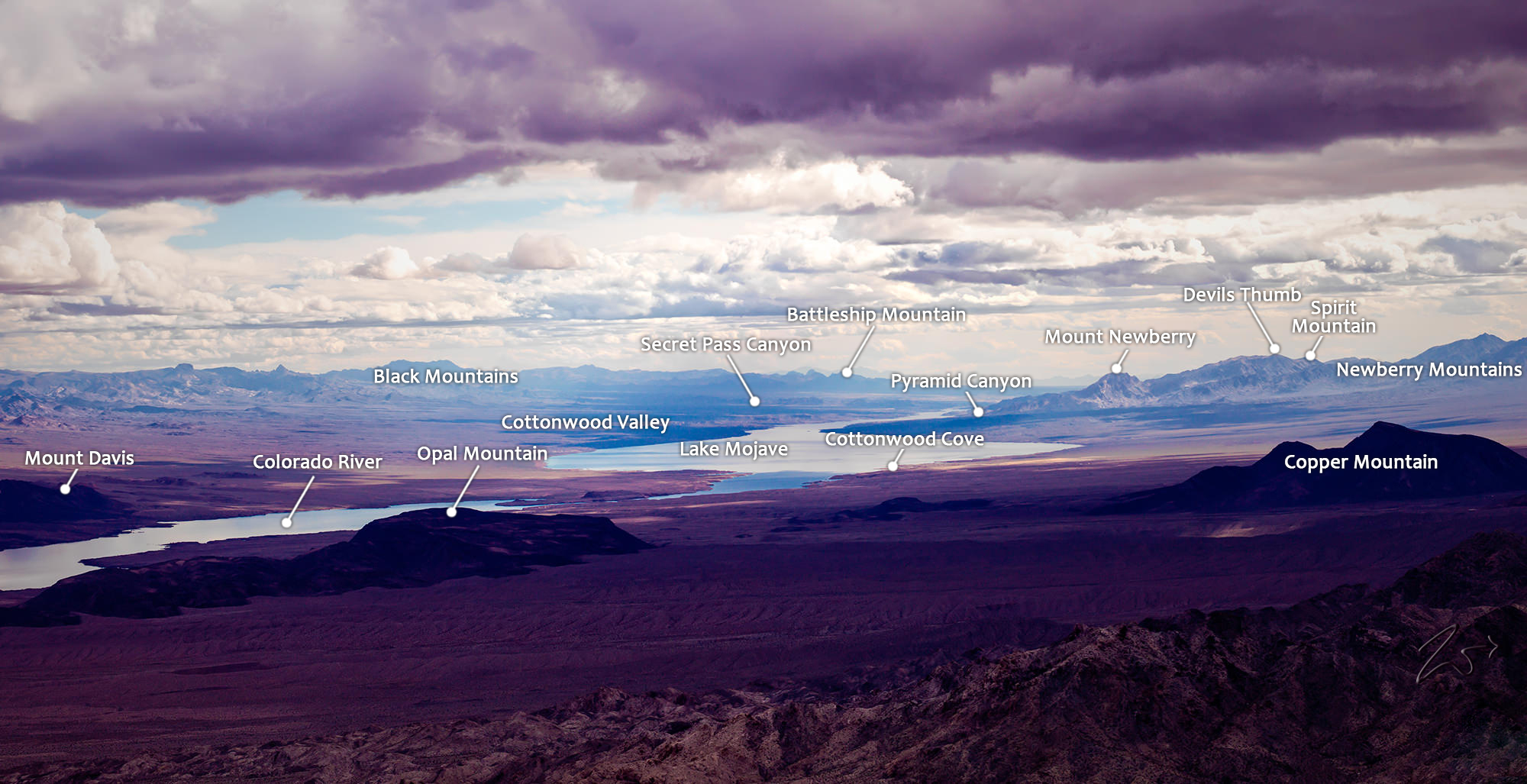 With headwaters in the central Rocky Mountains of Colorado, the Colorado River flows for 1,450-mile-long (2,330 km) on a meandering southwest journey across the Colorado Plateau. It cuts through the mighty Grand Canyon spilling out into Lake Mead where it forms the Arizona–Nevada border. Here the river it turns to the south where it forms the Arizona-California border and then flows across the international border into Mexico, across the dry desert to the Gulf of California.

It was the uplift of the Sierra Nevada mountains which began around 4.5 million years ago, that diverted the Colorado River southwards towards the Gulf. As the Colorado Plateau continued to rise between 5 and 2.5 million years ago, the river maintained its ancestral course (as an antecedent stream) and began to cut through the Grand Canyon and subsequent canyons as seen here below. 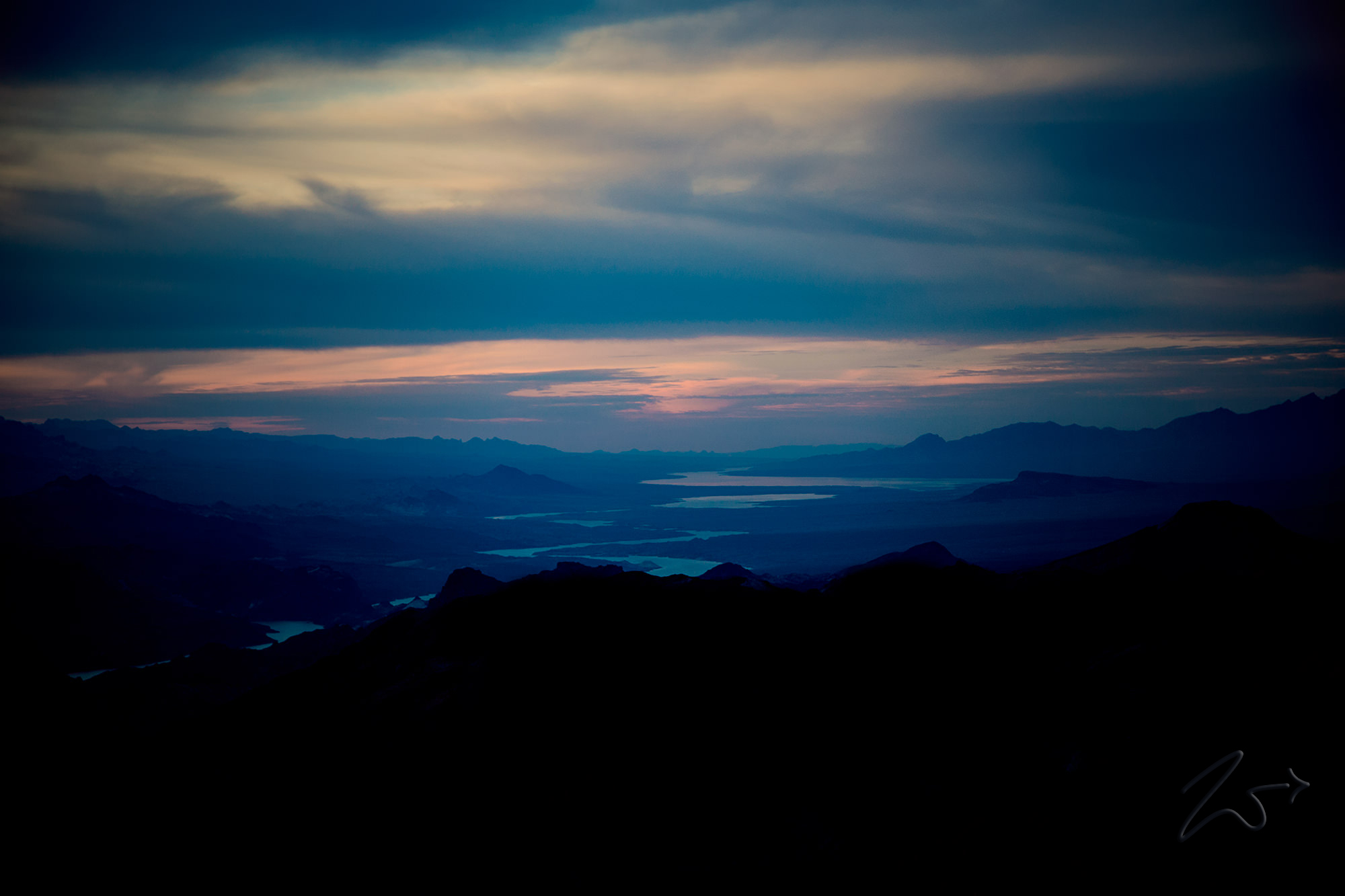 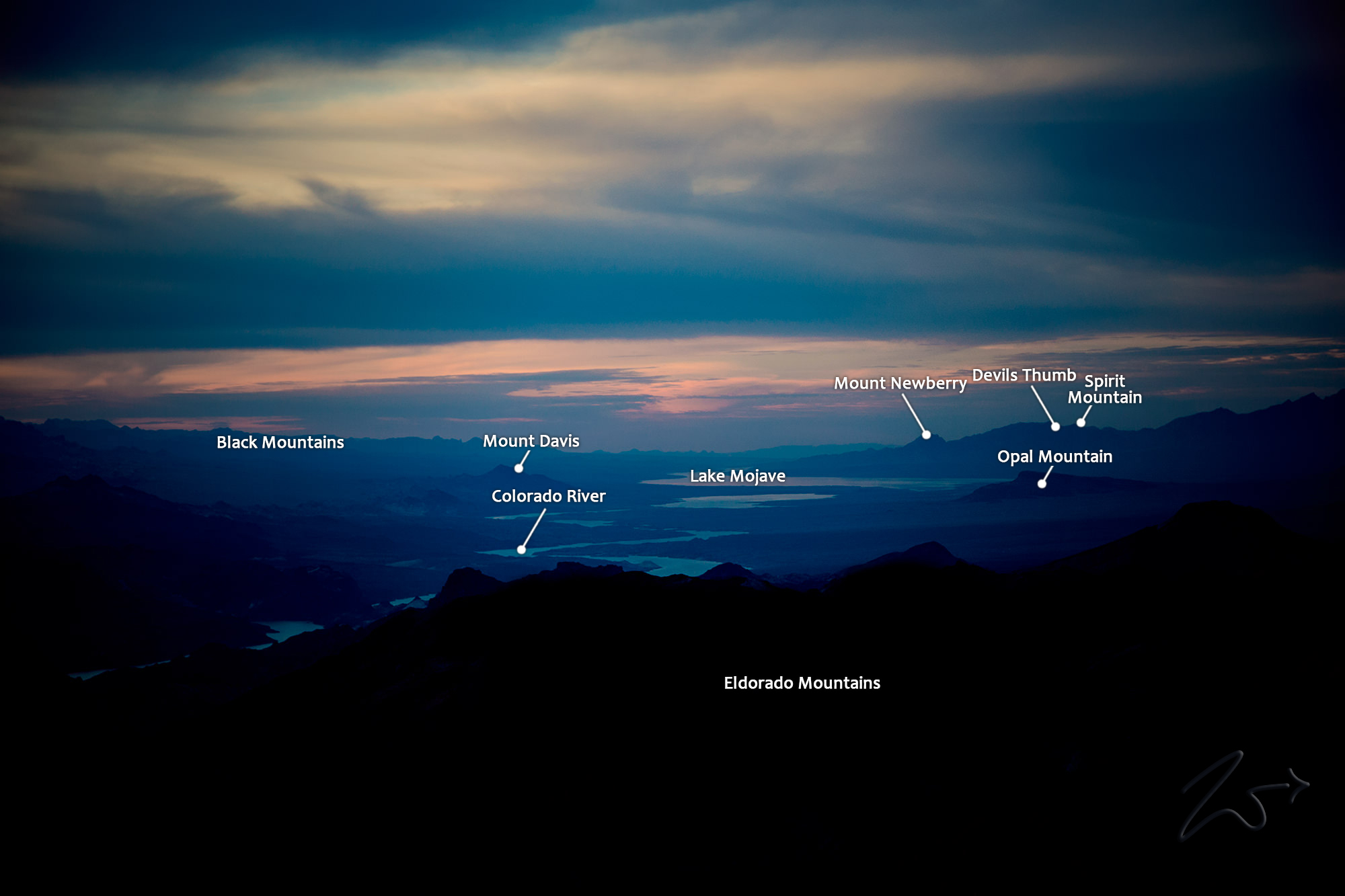 It was the uplift of the Sierra Nevada mountains which began around 4.5 million years ago, that diverted the Colorado River southwards towards the Gulf. As the Colorado Plateau continued to rise between 5 and 2.5 million years ago, the river maintained its ancestral course (as an antecedent stream) and began to cut through the Grand Canyon and subsequent canyons as seen here in this late evening image of the river from above the Eldorado Mountains.

Taken early in the morning from an altitude of 1,200 feet (365m) above ground, this view is looking northwest across the Colorado River south of Boulder City, Nevada with the El Dorado Mountains along the horizon. 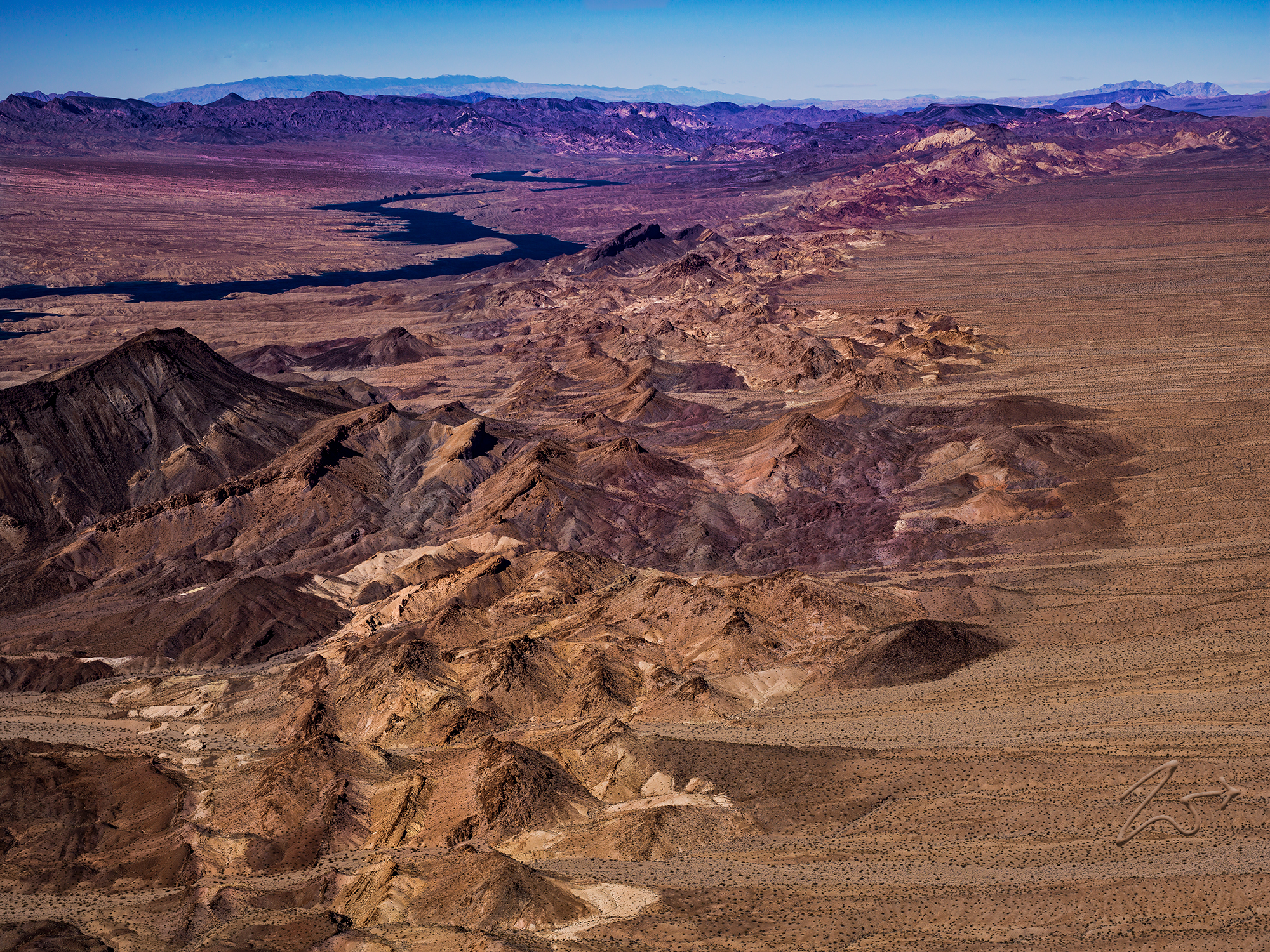 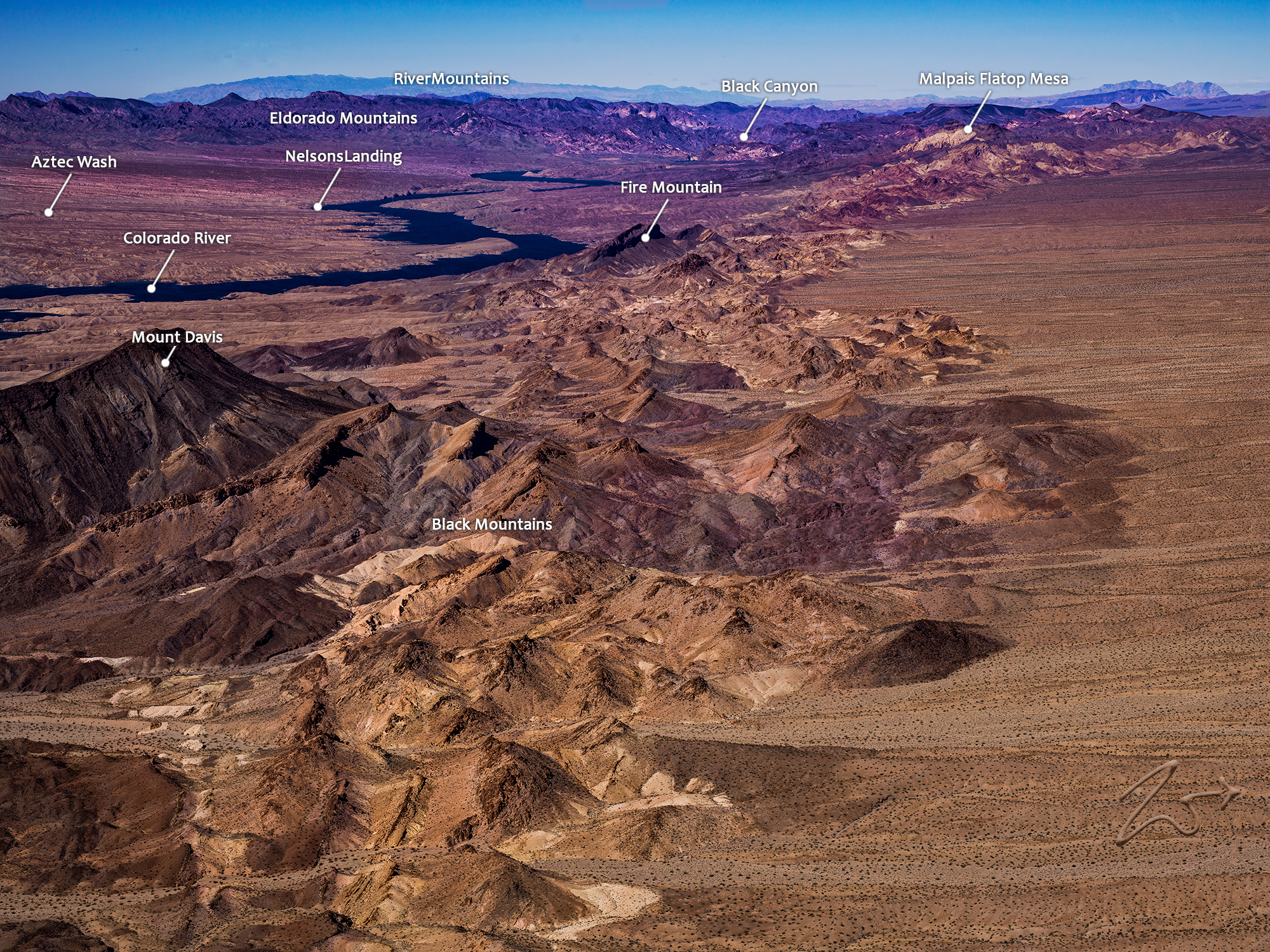 This area is known as Black Canyon and was formed about 15 million years ago during the Miocene Basin and Range uplift. Black Canyon gets its name from the black volcanic rocks that are found throughout the area. On the right side of the river lays Fire Mountain, Malpais Flattop Mesa and the Black Mountains on the Colorado River. This very clear faulted ridge-line runs alongside the Colorado River, forming the border between Nevada and Arizona.

Zedekiah: “I love the different colors of green and blue water and the rippling effect from the wind along the surface of the river. If you look close enough under the water you can see fish and rivulets where strong water drainage from rainstorms cut a path into the floor of the river as they flow from the mountains surrounding the river into the lake.” 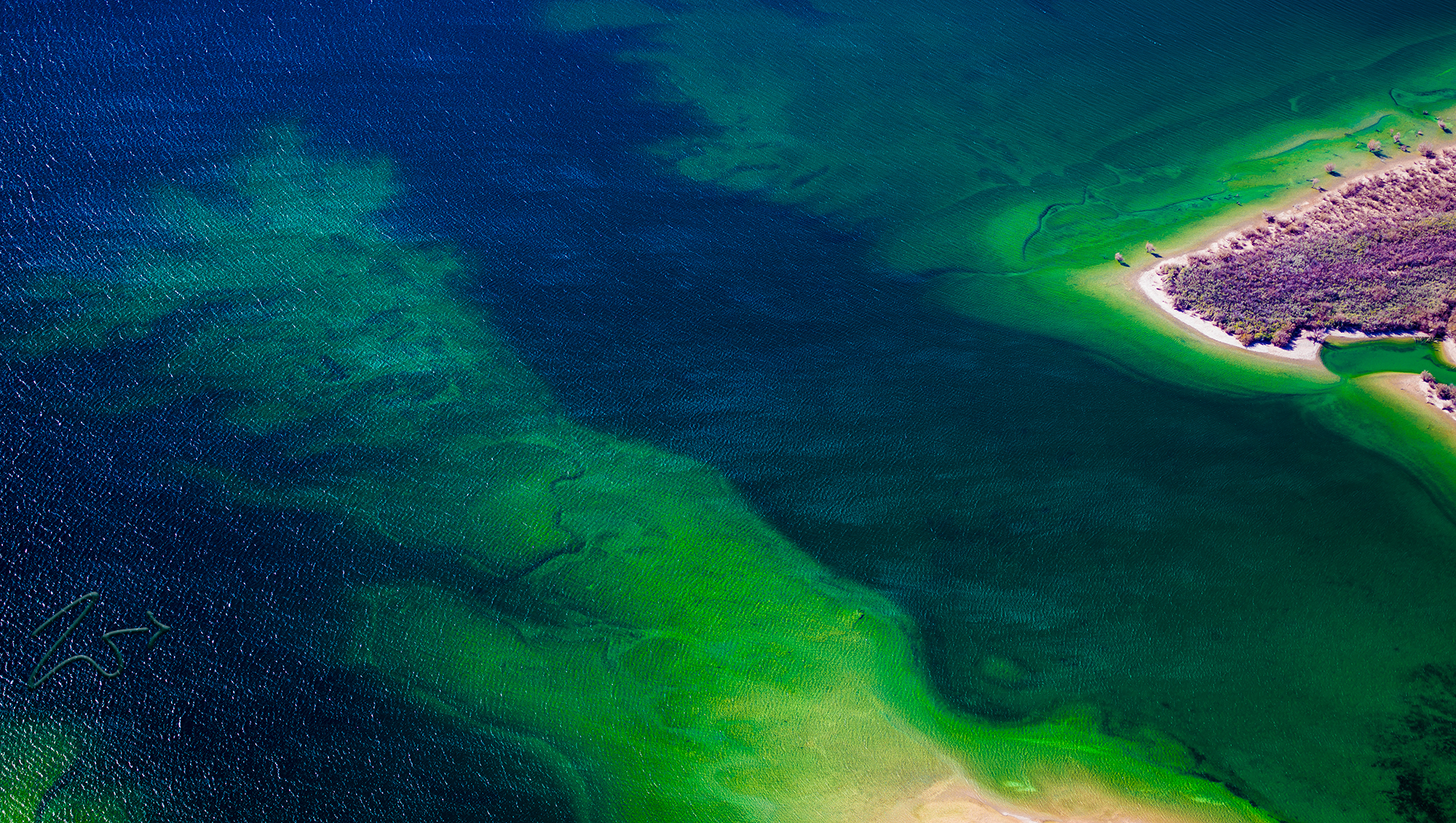 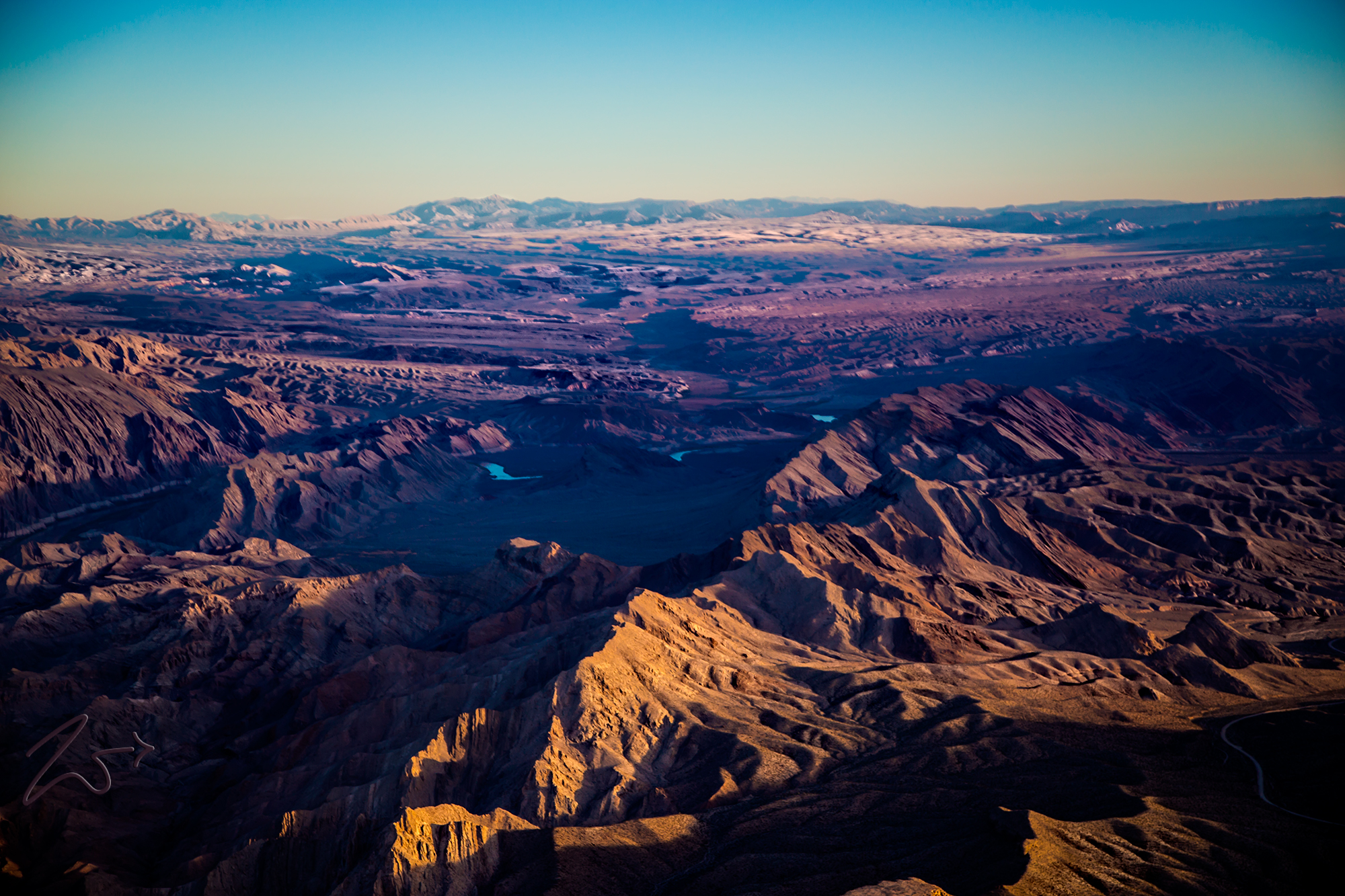 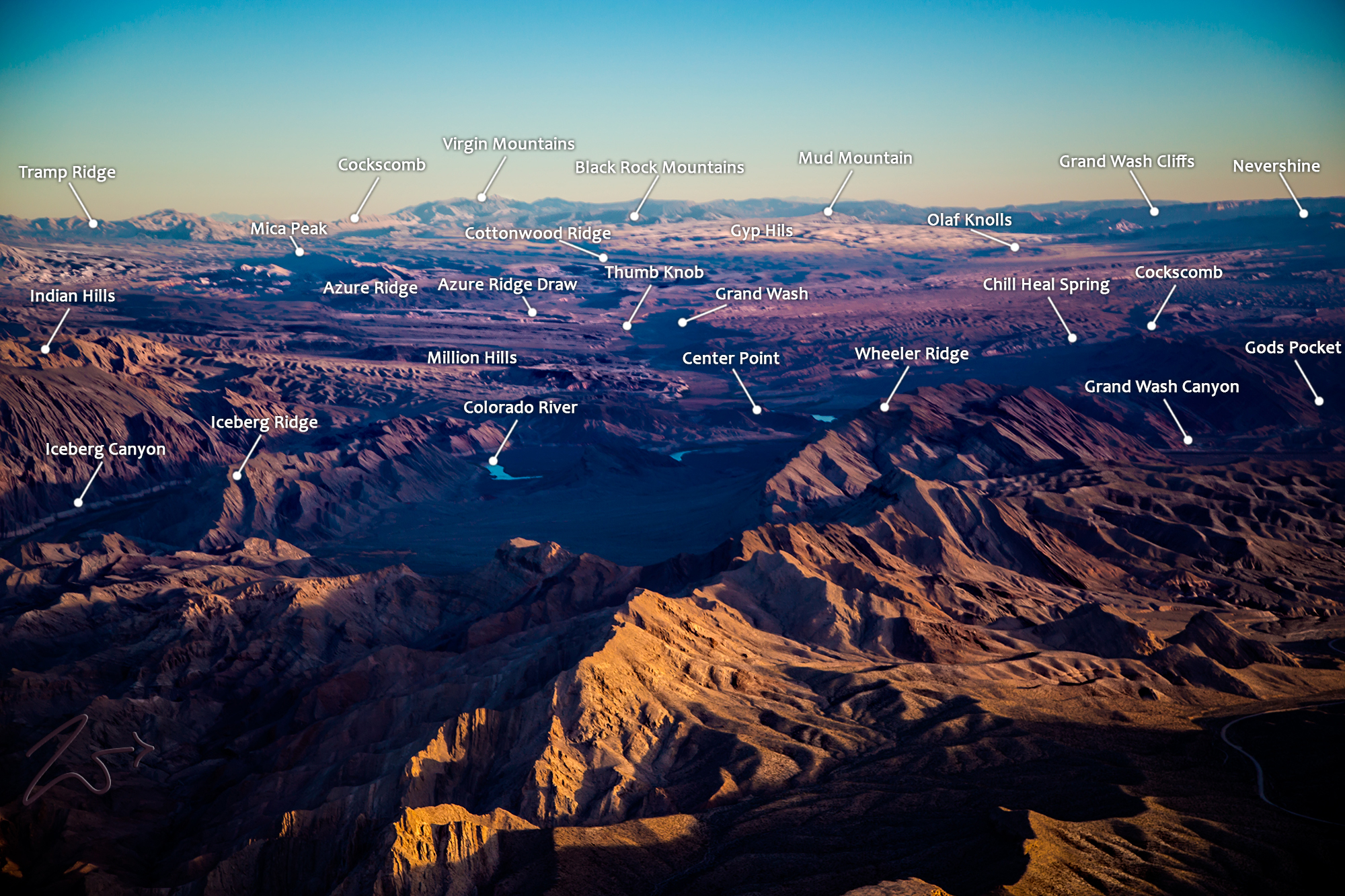 In this scene, the Colorado River is barely visible as it peeks out from within Iceberg Canyon and Pearce Ferry, where the river exits from its long passage through the Grand Canyon. In the distance lie the Gyp Hills, Hidden Hills and the Grand Canyon Parashant National Monument.

The first humans of the Colorado River Basin were likely Paleo-Indians of the Clovis and Folsom cultures, who first arrived on the Colorado Plateau about 12,000 years ago. Beginning with small bands of nomadic hunter-gatherers, First Nations Tribal peoples inhabited the Colorado River basin beginning 8,000 years ago. Between 2,000 and 1,000 years ago, the river and its tributaries fostered large agricultural civilizations, – some of the most sophisticated indigenous cultures in North America – which eventually faded over time. Another notable early group was the Fremont Culture, whose peoples inhabited the Colorado Plateau from 2,000 to 700 years ago. The Fremont were likely the first peoples of the Colorado River Basin to domesticate crops and construct masonry dwellings; they also left behind a large amount of rock art and petroglyphs, many of which have survived to the present day.

It is worth noting that a great deal of controversy still exists over First Nationals Tribal water rights in the Colorado River Basin which have been routinely largely ignored during the extensive water resources development carried out on the river and its tributaries. Construction of dams has often had negative impacts on First Nations Peoples, such as the Chemehuevi; their riverside lands were flooded after the completion of Parker Dam in 1938. Ten Native American tribes in the basin now hold or continue to claim water rights to the Colorado River 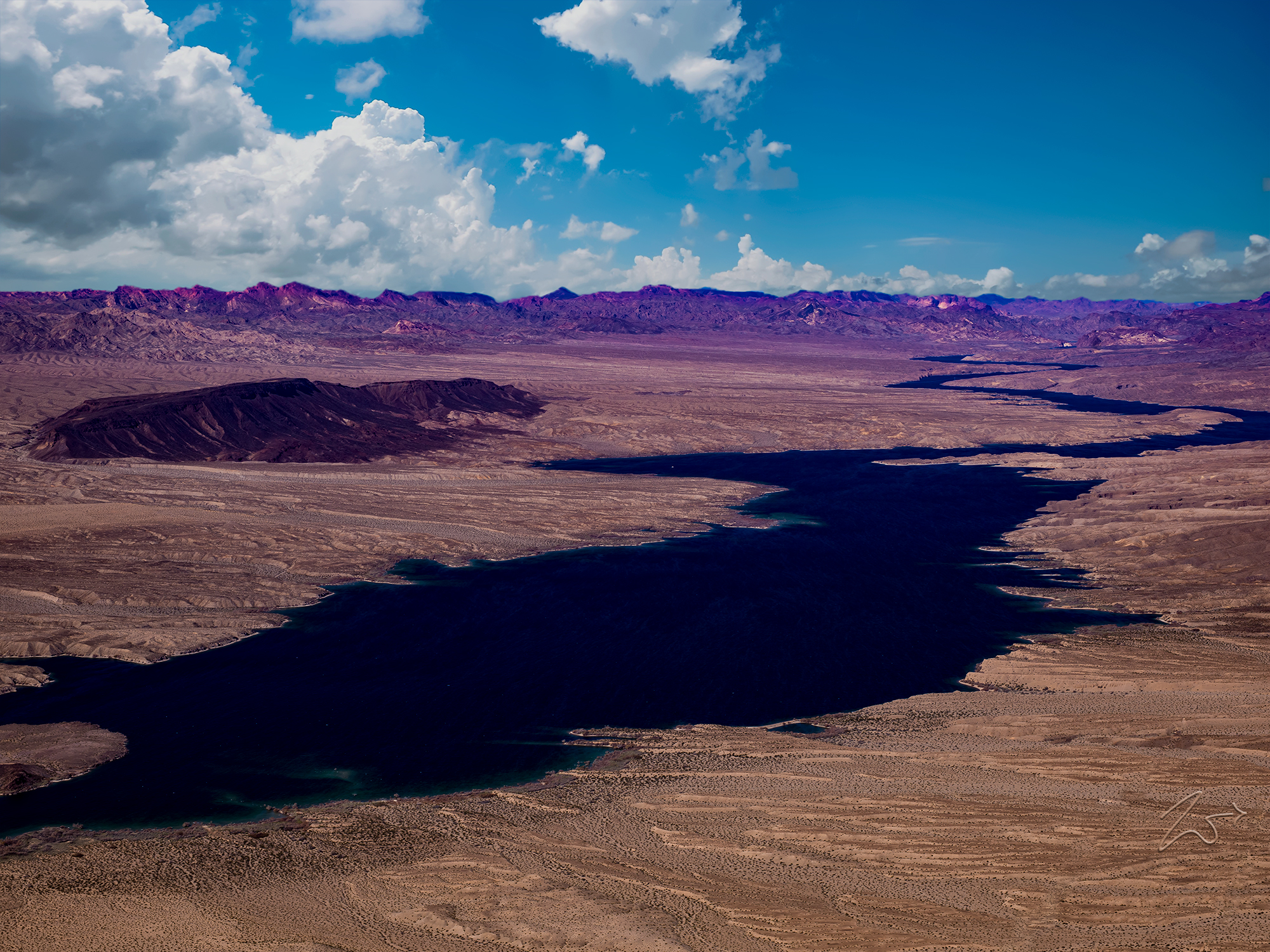 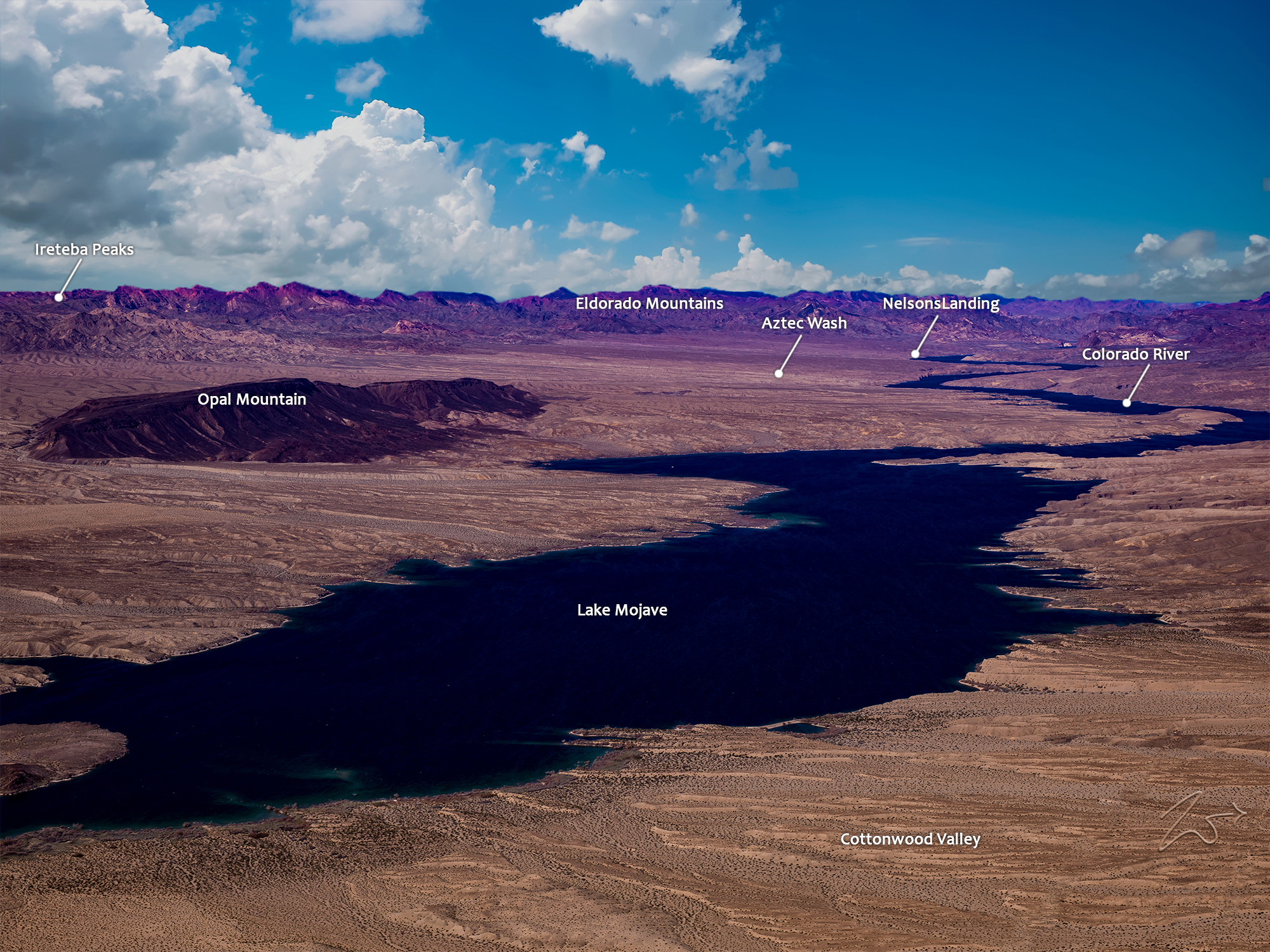 Another notable early group was the Fremont culture,  whose peoples inhabited the Colorado Plateau from 2,000 to 700 years ago. The Fremont were likely the first peoples of the Colorado River basin to domesticate crops and construct masonry dwellings; they also left behind a large amount of rock art and petroglyphs, many of which have survived to the present day.

In this image, the sun sets in the west creating a golden atmospheric hue over the Colorado River as it passes through Black Canyon.

The mountains on either side of the river in this area are absolutely full of small precious metals mines dating back 150 years or so. With names like Blackfoot Mine, Silver Hill, Luck Boy Mine, Eureka Mine, New Moon Mine, New Jersey Mine, Clyde Mine, and White Eagle Mine, you can find these tiny one man or small group mines all over the hillsides. Sometimes they are no more than a hole just large enough for one person to delicately crawl through, others are larger with room for mule or old gas-powered equipment that they used to bring the ore up and get it to market. It must have been a very rough life! 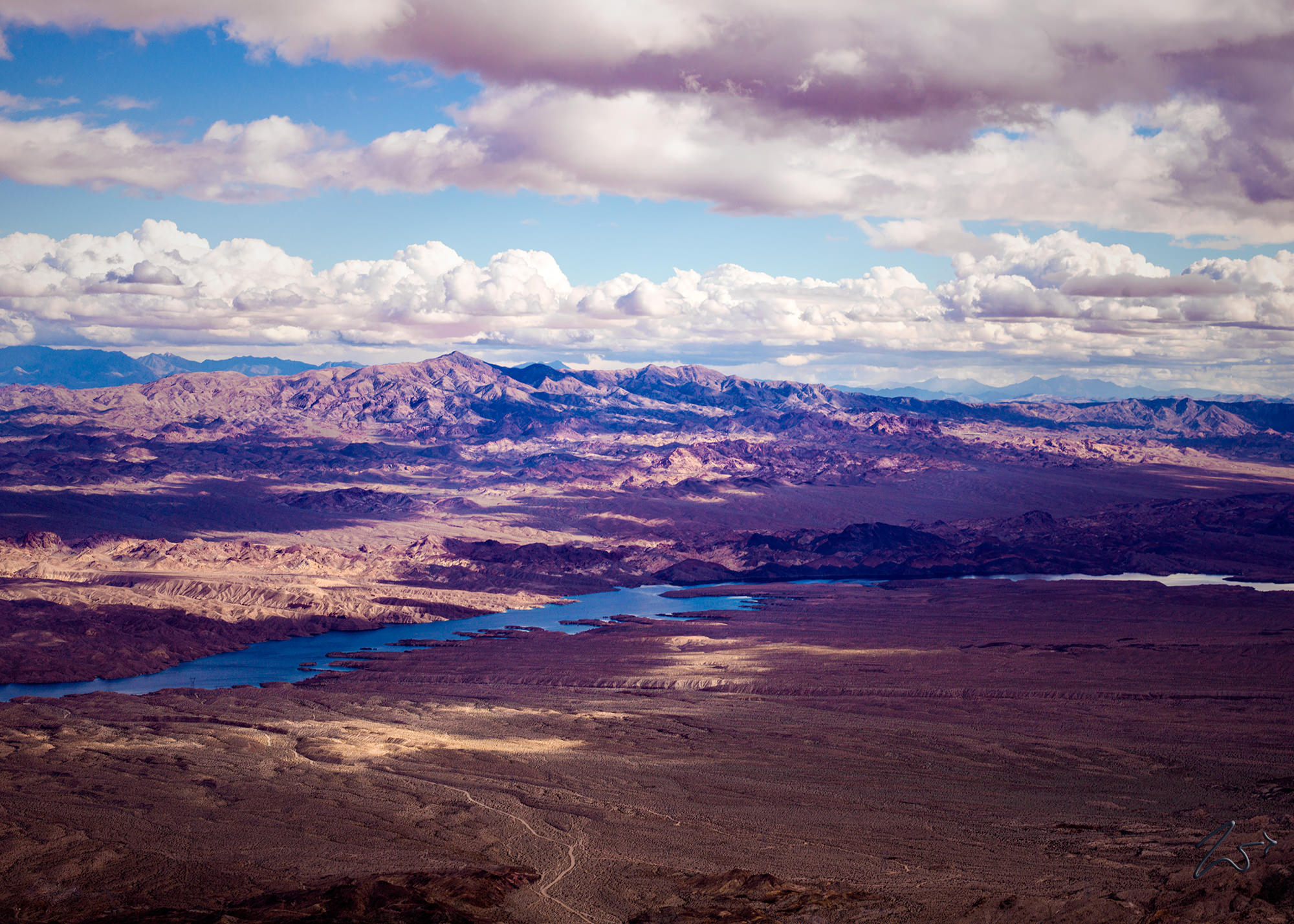 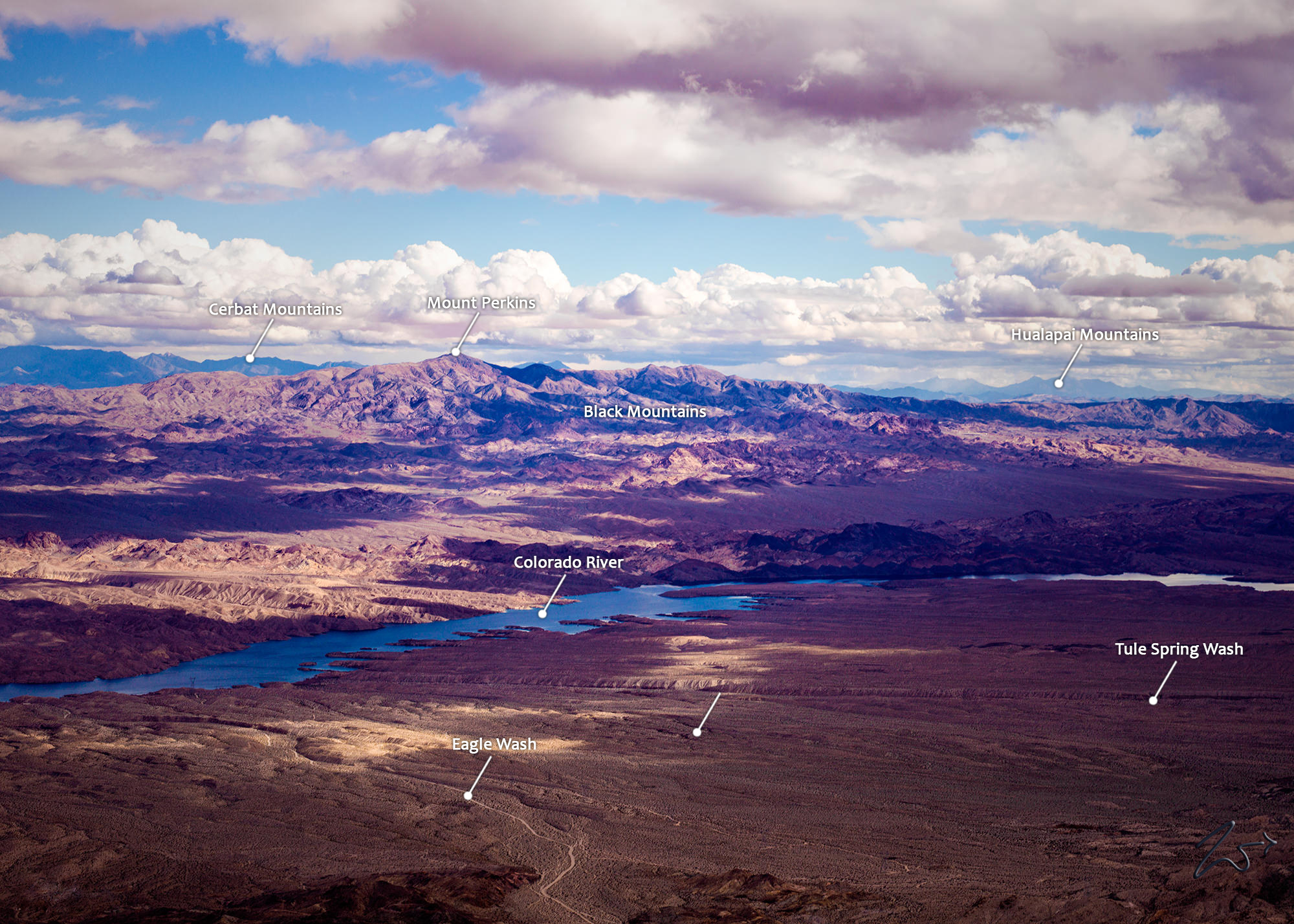 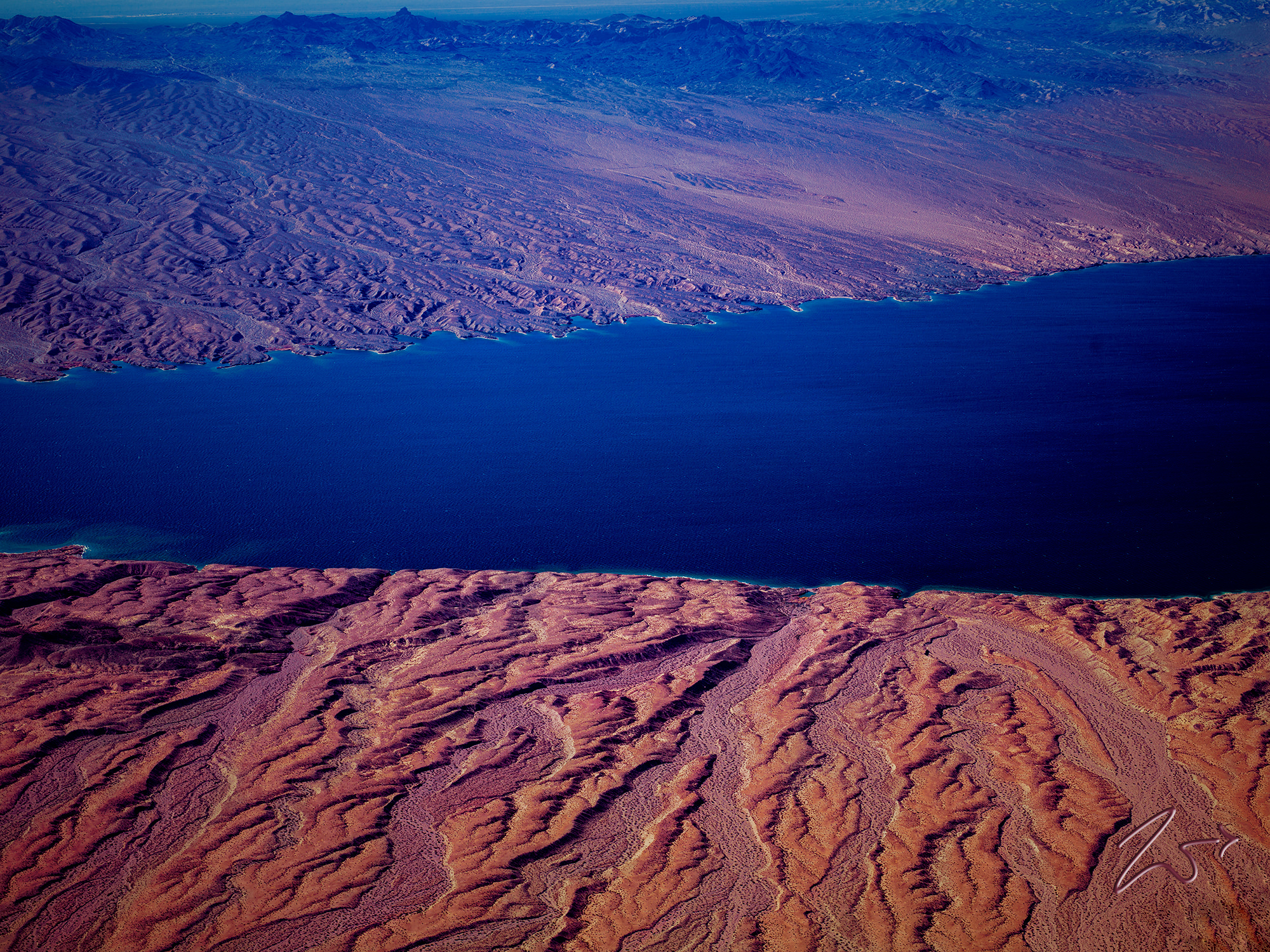 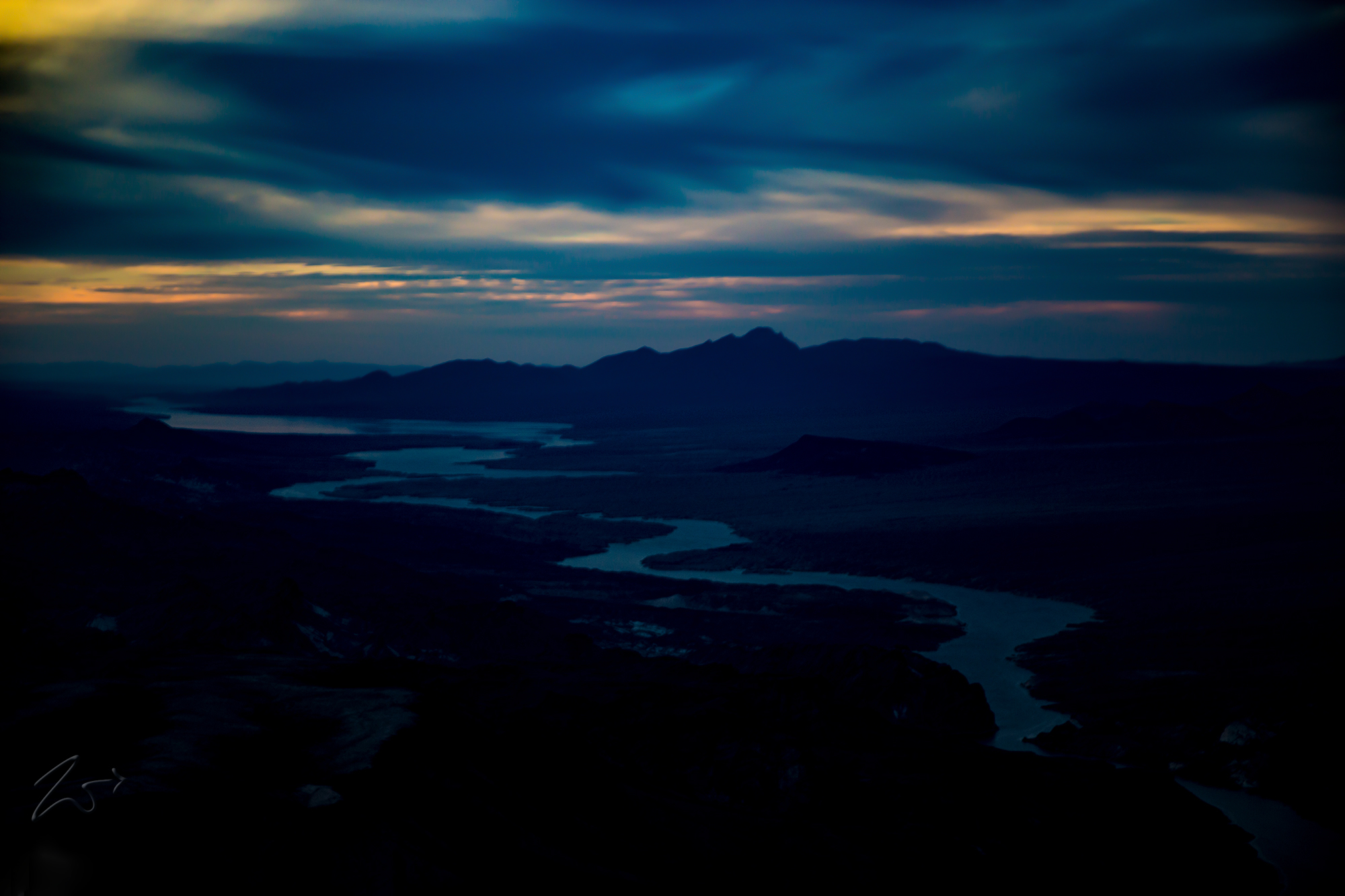 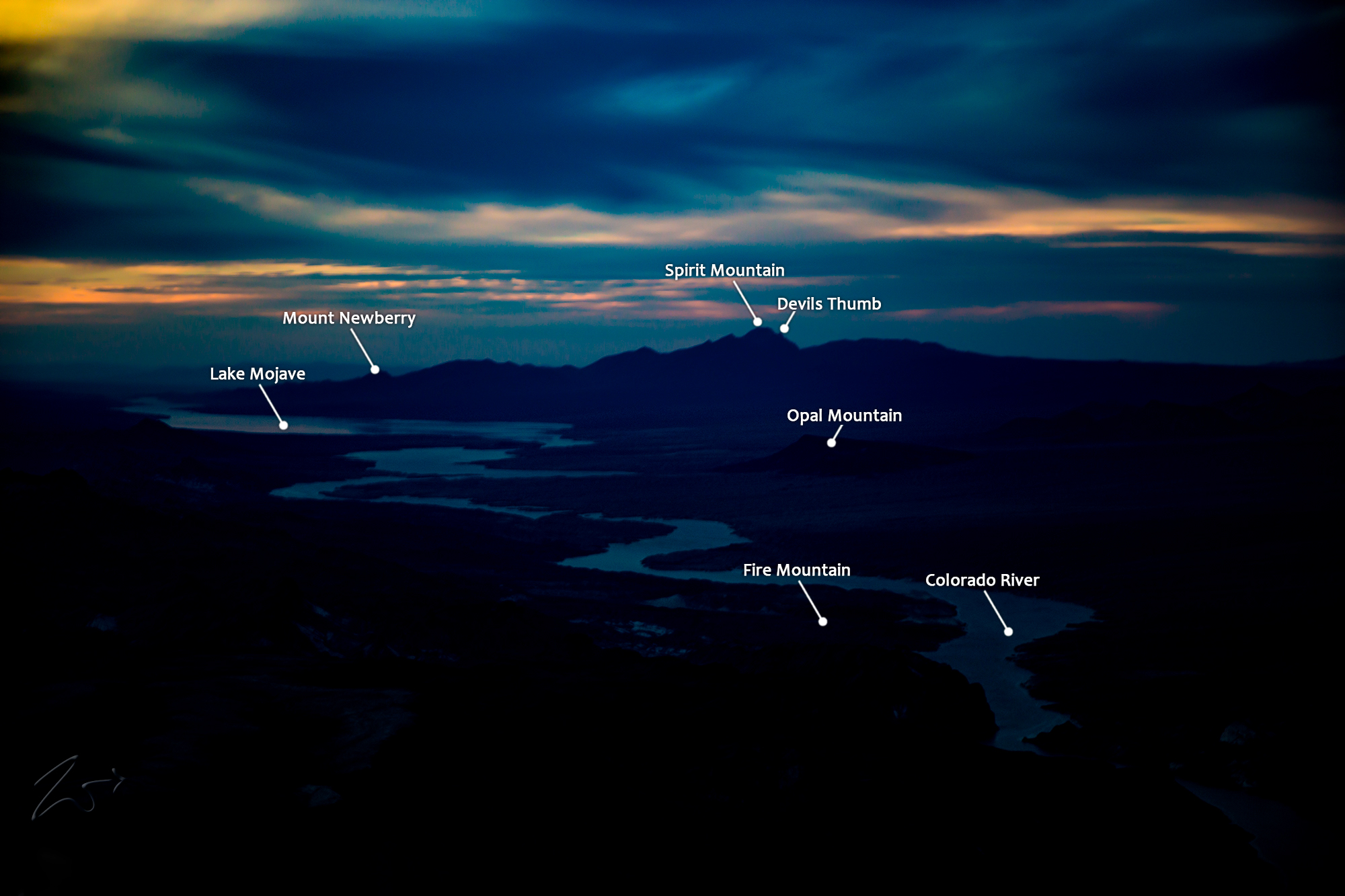 This dusk-time image is of the Colorado River as it flows into Lake Mojave. The Newberry Mountains stand on the horizon while the small black hill on the western (right) side of the lake is known as Opal Mountain. This area is called the Cottonwood Valley.

Zedekiah: “This closeup, below, of the image up top, shows the bend where the river begins to widen and become Lake Mojave. The natural formation of the bend resembles a harks head, with a defined eye, sharp beak, lower beak and feathers at the back of the head.” 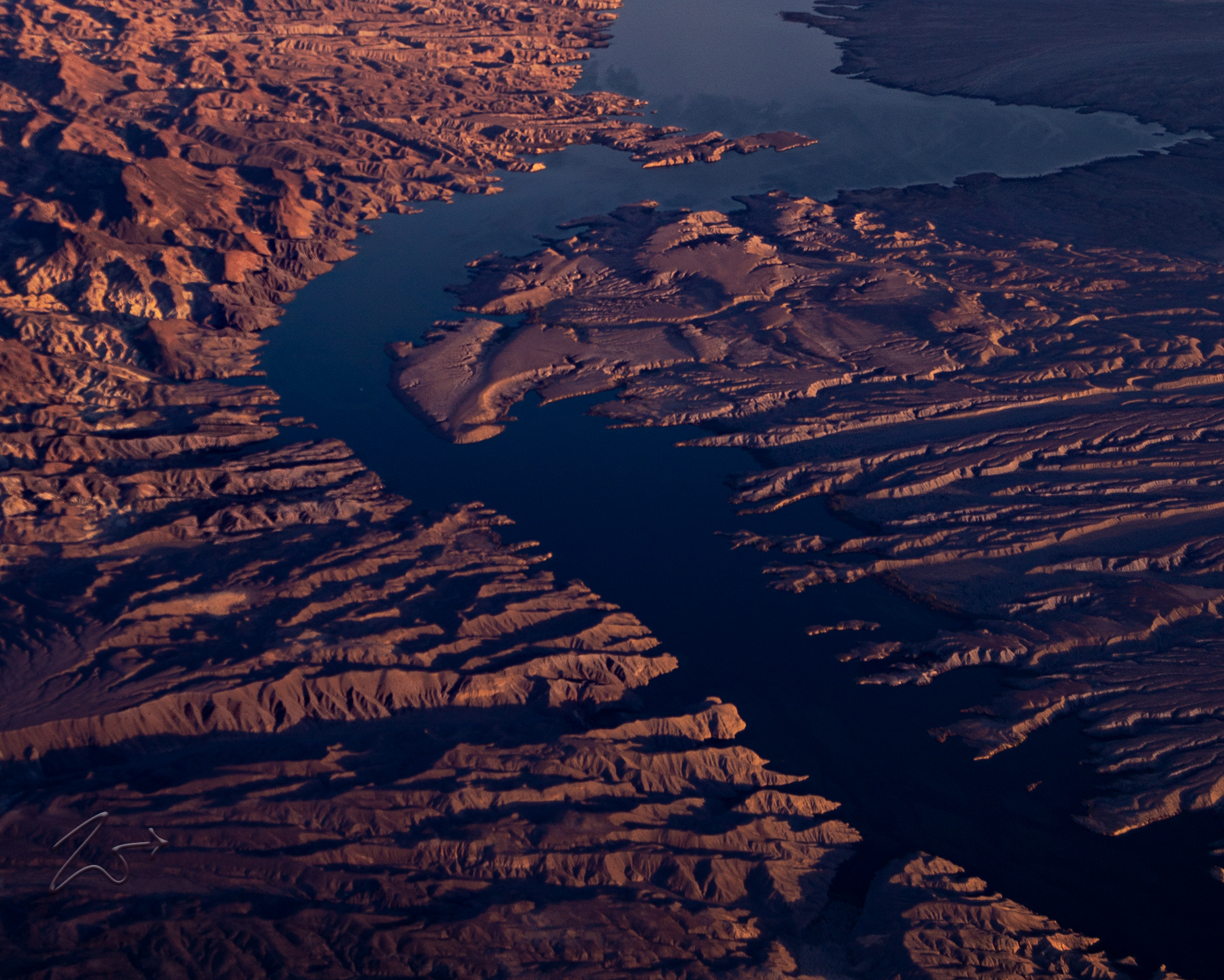