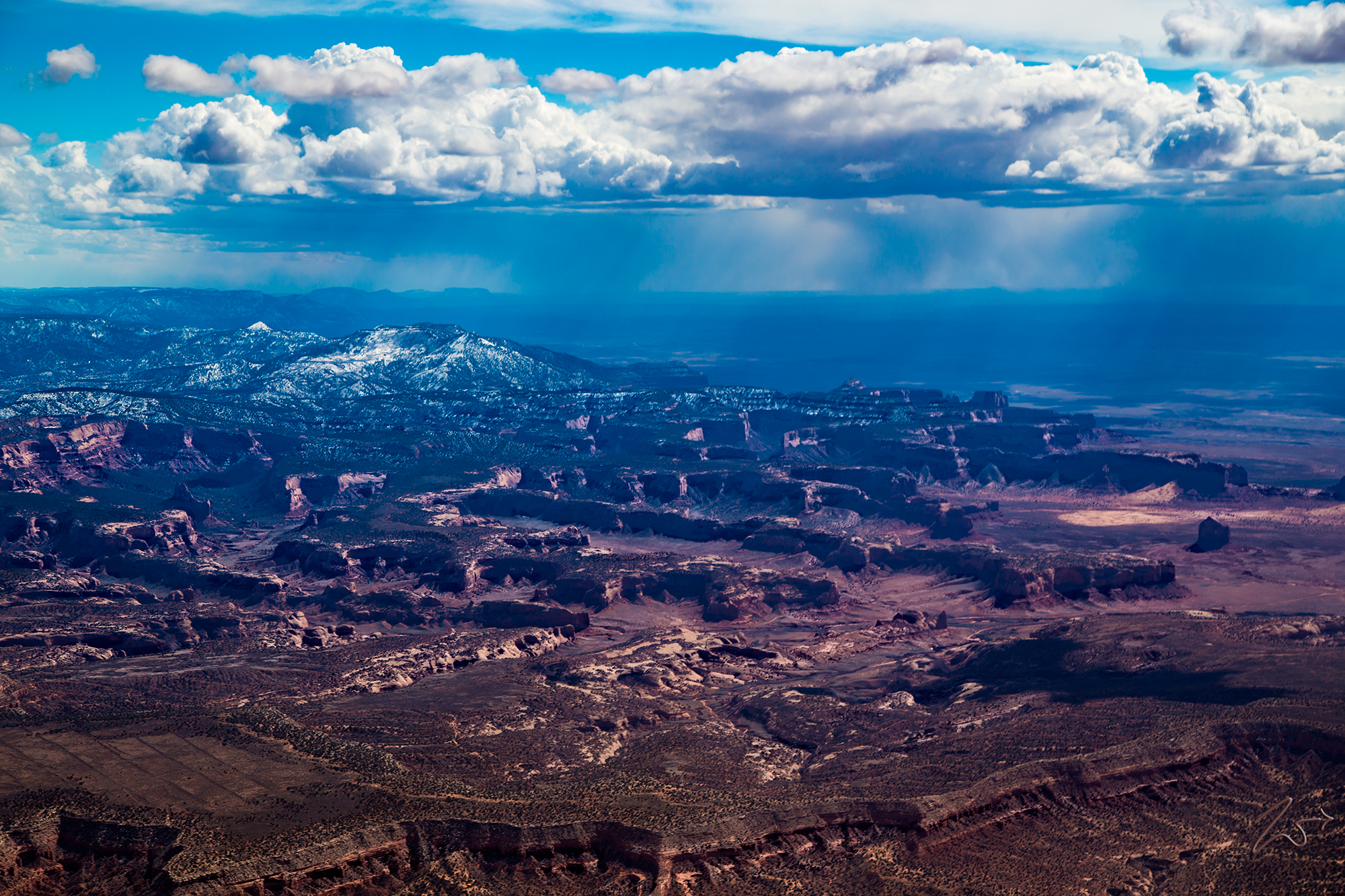 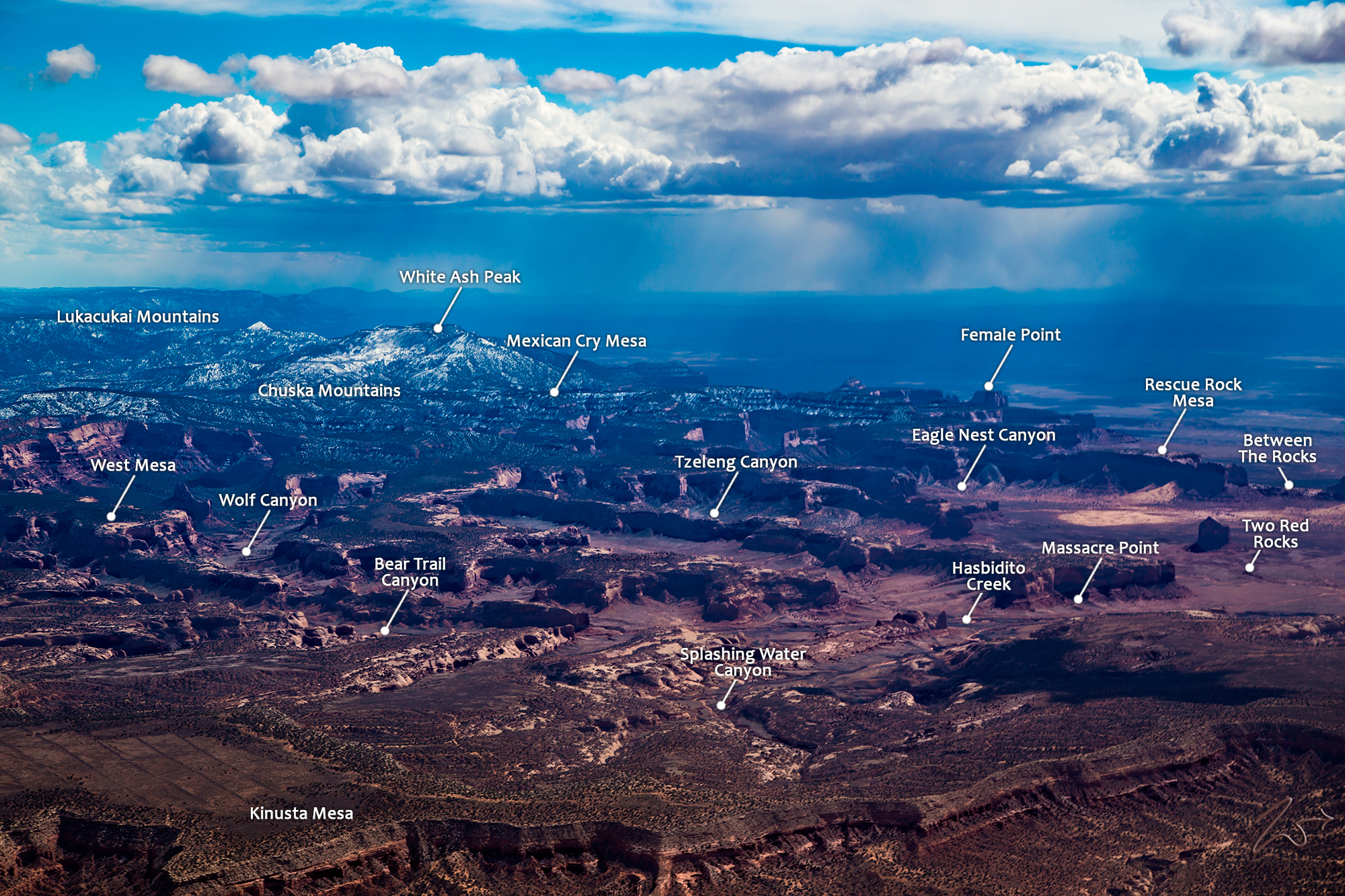 These are the Lukachukai Mountains, part of the northwestern spur of the Chuska Mountains and Lukachukai Pass separates them from the main mountain mass. “Lukachukai” is a Navajo word meaning “patches of white reeds” and no doubt refers to the many lakes occurring on the main flat-topped ridge of the mountains.

In the image above, Finger Mesas radiate off of Mexican Cry Mesa resembling ancient fortresses on some alternative world. These sacred grounds are located on the Arizona part of the First Nations Navajo (Diné) Nation south of Four Corners and just over the ridge from Shiprock.

Along the horizon on the left side of this image is the snow-covered Chuska Mountains. These are an isolated elongate range on the southeast Colorado Plateau whose highest peaks approach 10,000 feet. The range is about 50 by 10 miles (80 by 15 km).  Moving right we see the flattops of the Sonsela Buttes and then the vast Lukachukai Wash Valley. In the immediate foreground, the ridgeline running horizontally along the bottom of the image is Kinusta Mesa. This image illustrates 3 different geologic formations, mountains, mesas, finger mesas, and buttes. 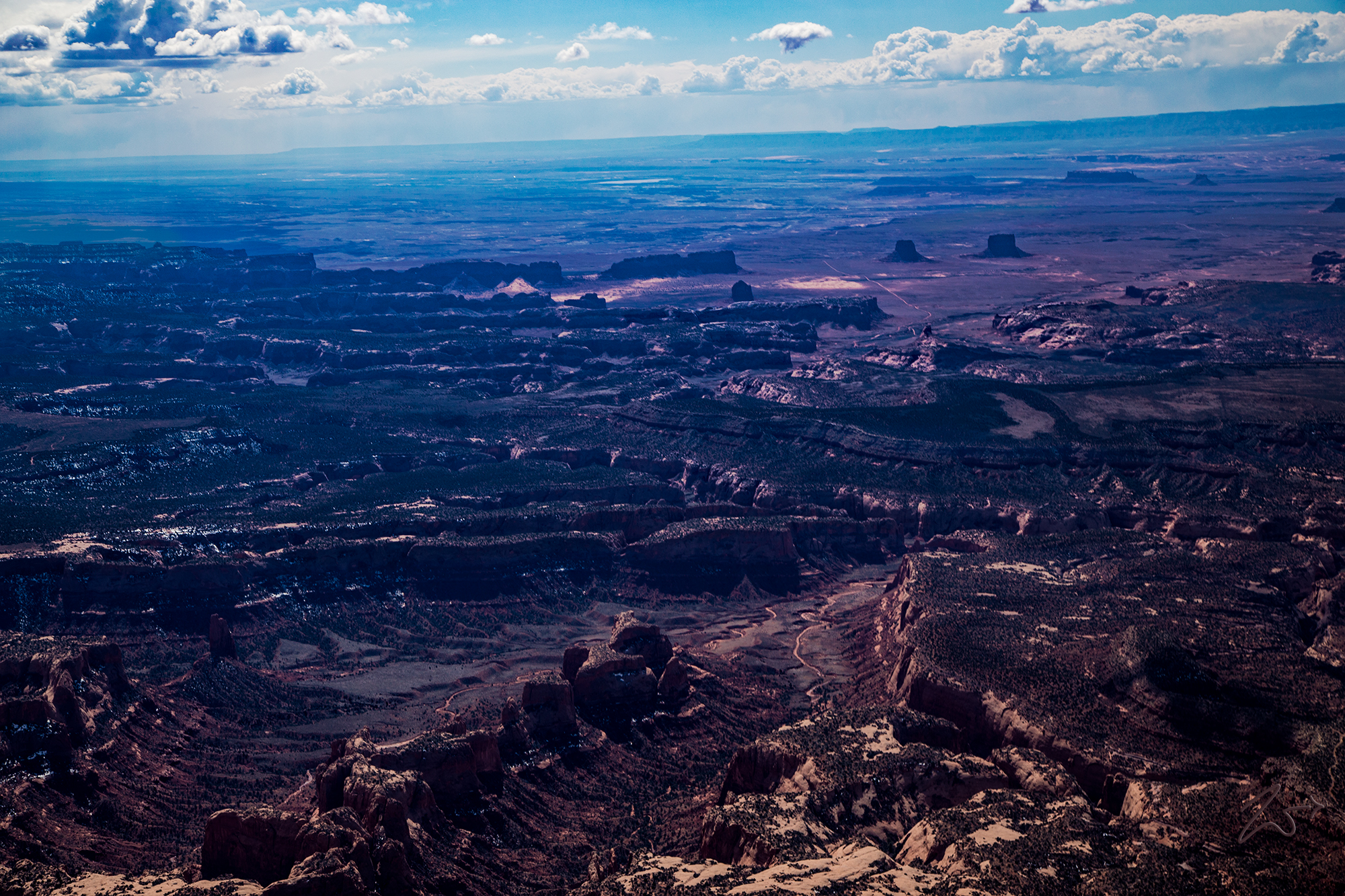 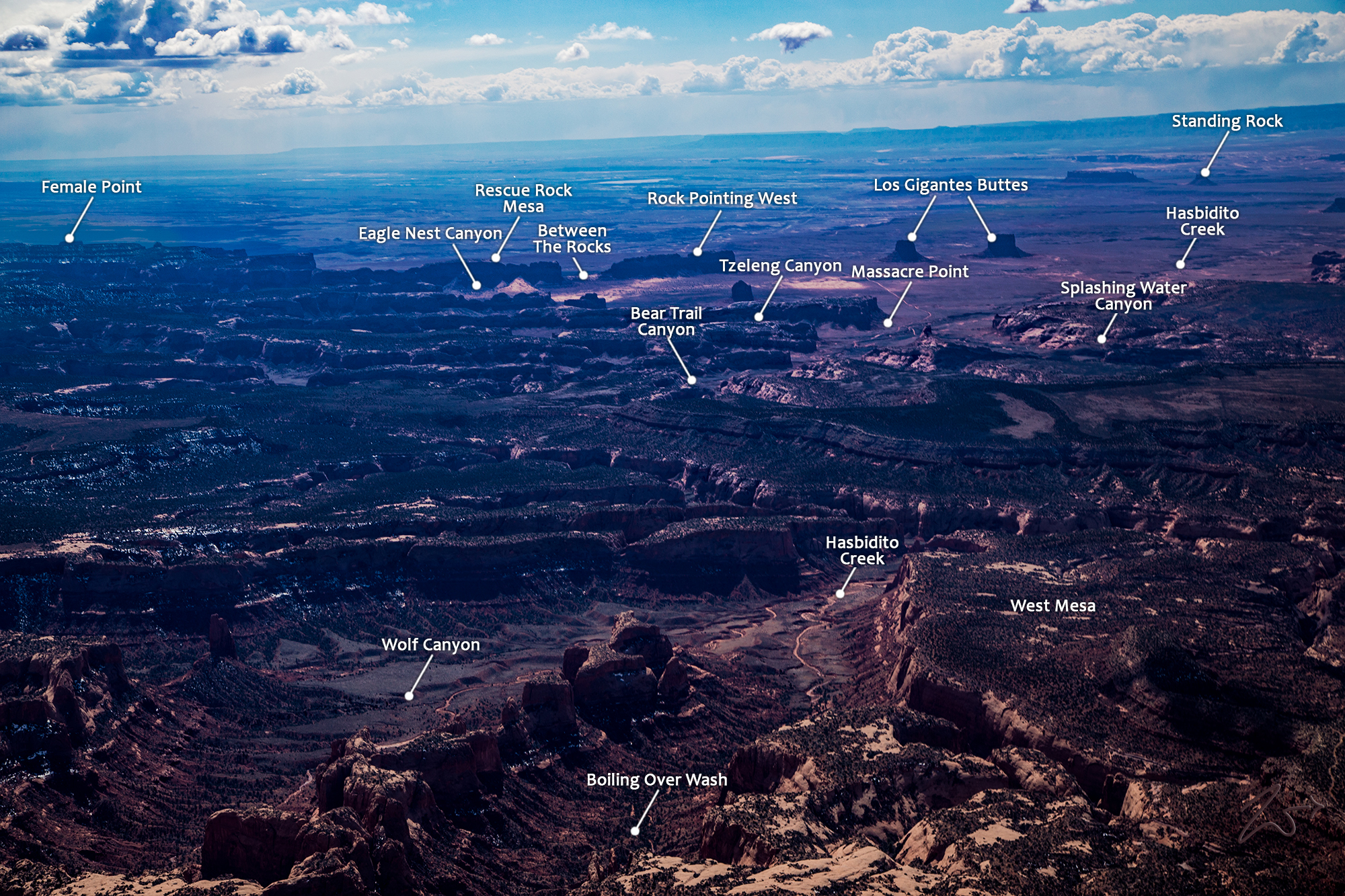 Finger-like mesas and deep, steep-walled canyons combine to form very rugged topography. Except for the higher mountain slopes above the heads of the canyons, rock exposures are excellent and fairly continuous, though in many places inaccessible. These finger-like mesas are not true mesas and bear such descriptive names at Two Prong, Camp, Cisco, Three Point, Knife Edge, Bare Rock,  Flag, Step, Fall Down, and Thirsty. 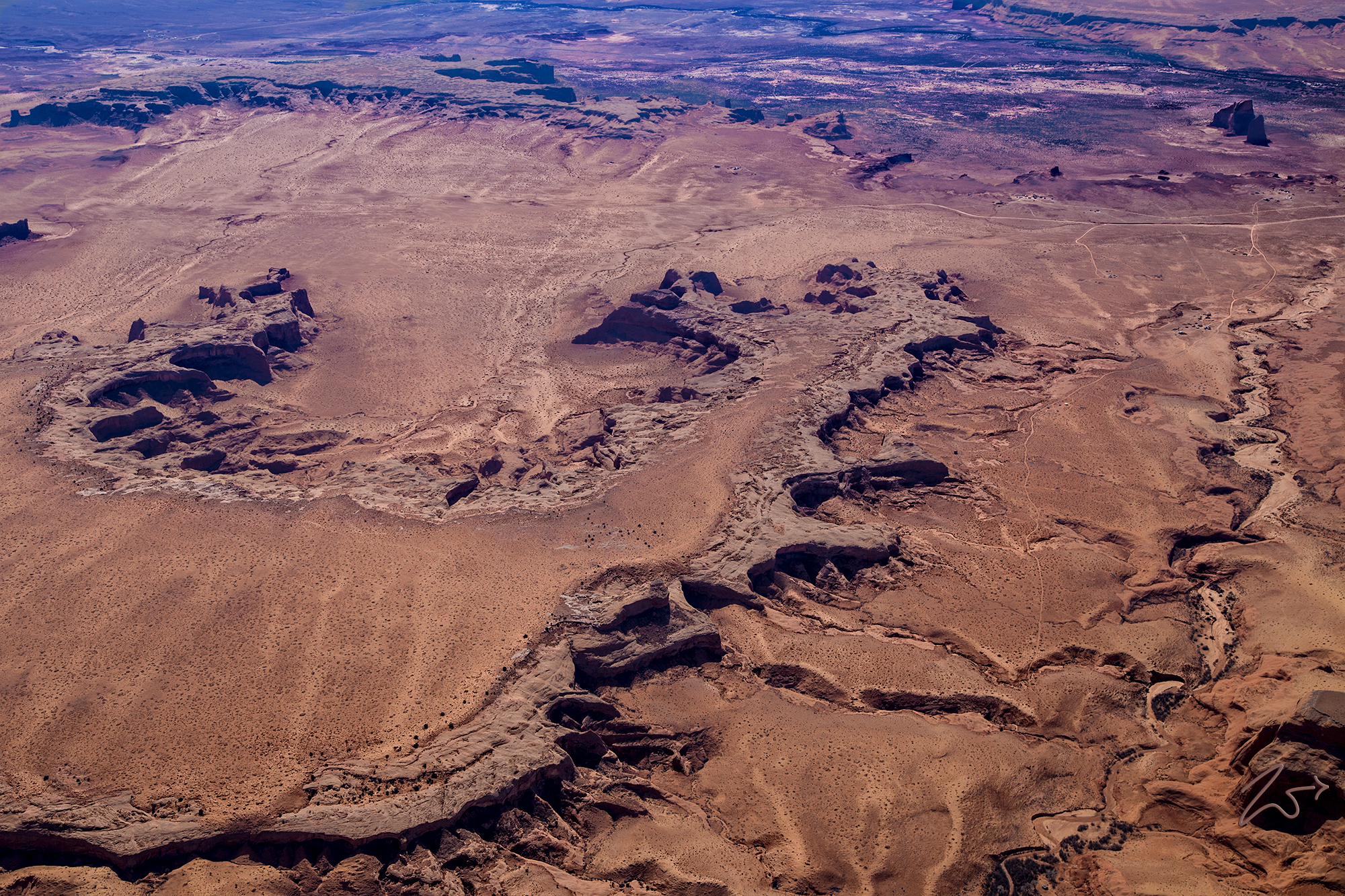 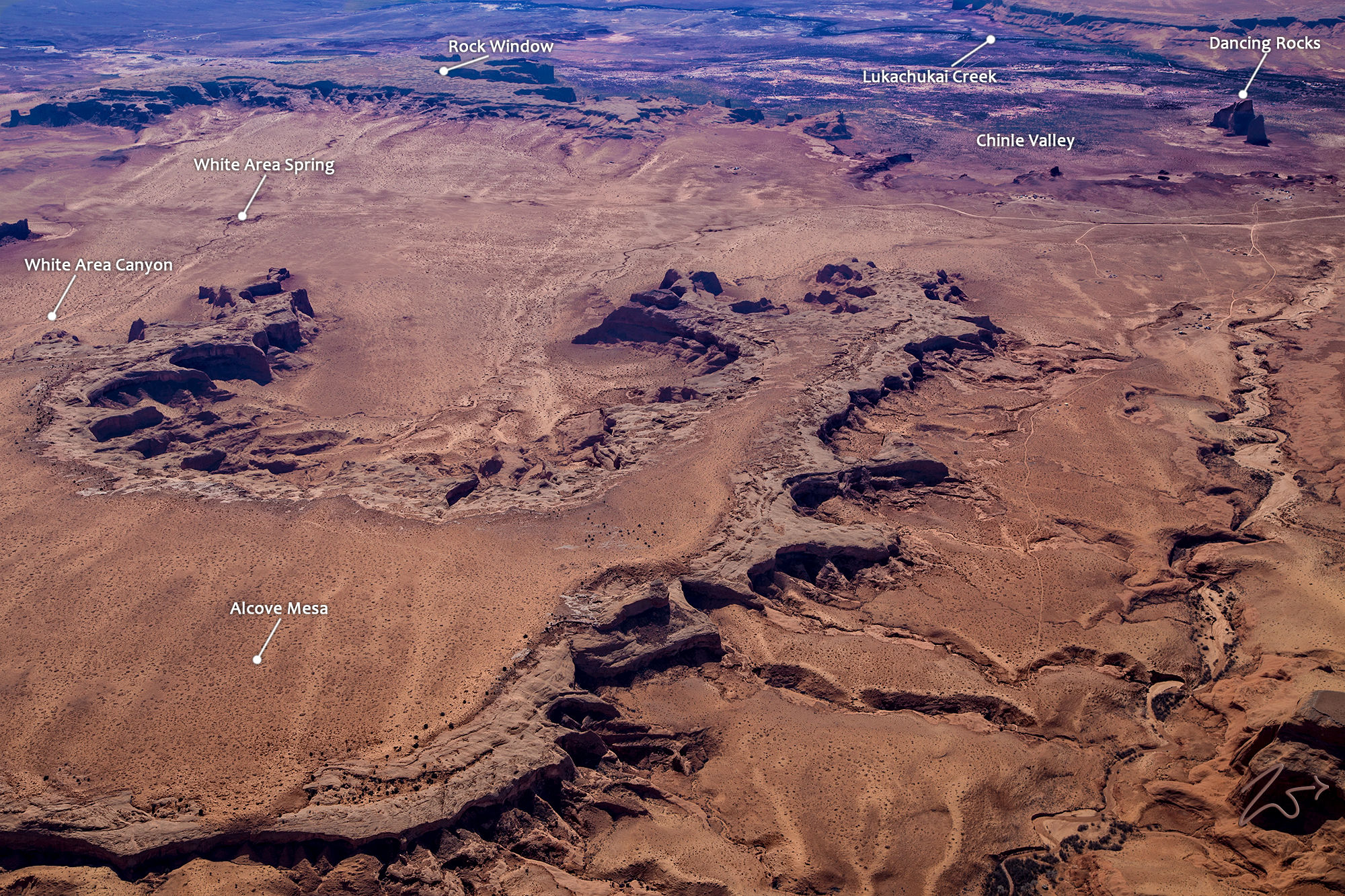 On the top right side of this image, you can see a dark-colored rock protuberance, this is known in First Nations Navajo  ( Diné ) traditions as “Dancing Rock” or  Tsé Biná’ookahi (Rock Around Which ?) or Tsé Bitsii’ (Rock’s [Head] Hair, or Hair Rock). Seems there are numerous names for this rock outcropping.Located between Round Rock and Rock Point, Arizona, is the area known as the Standing Red Rocks (Tsélichii ‘Ií’áhí). One of these, the largest (except for mesas), is Dancing Rock (also locally called “The  Whale”). “It is the site of an annual yé’ii dance, held alternately at  the east, the south, the west, and the north side of the butte.” 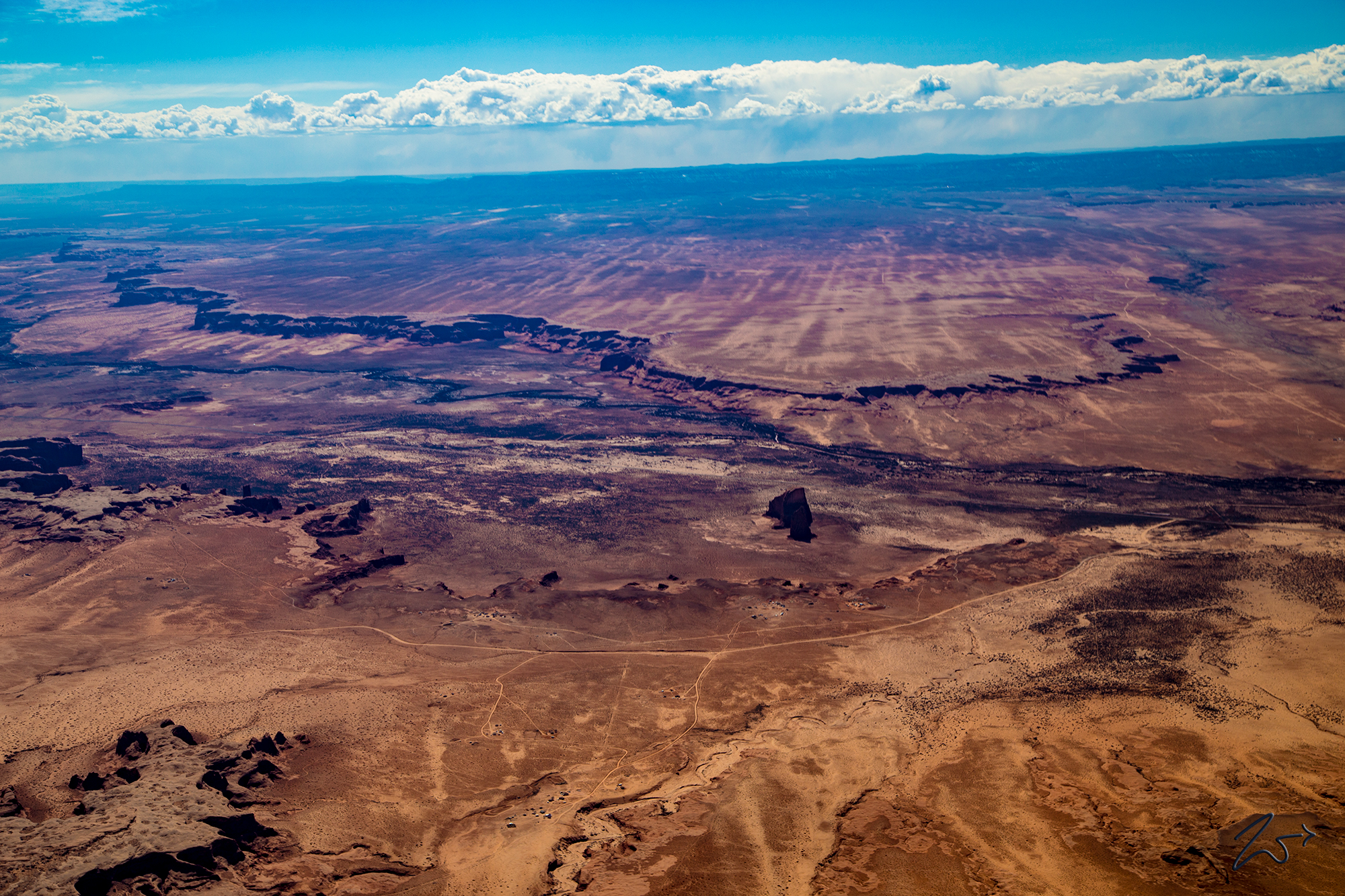 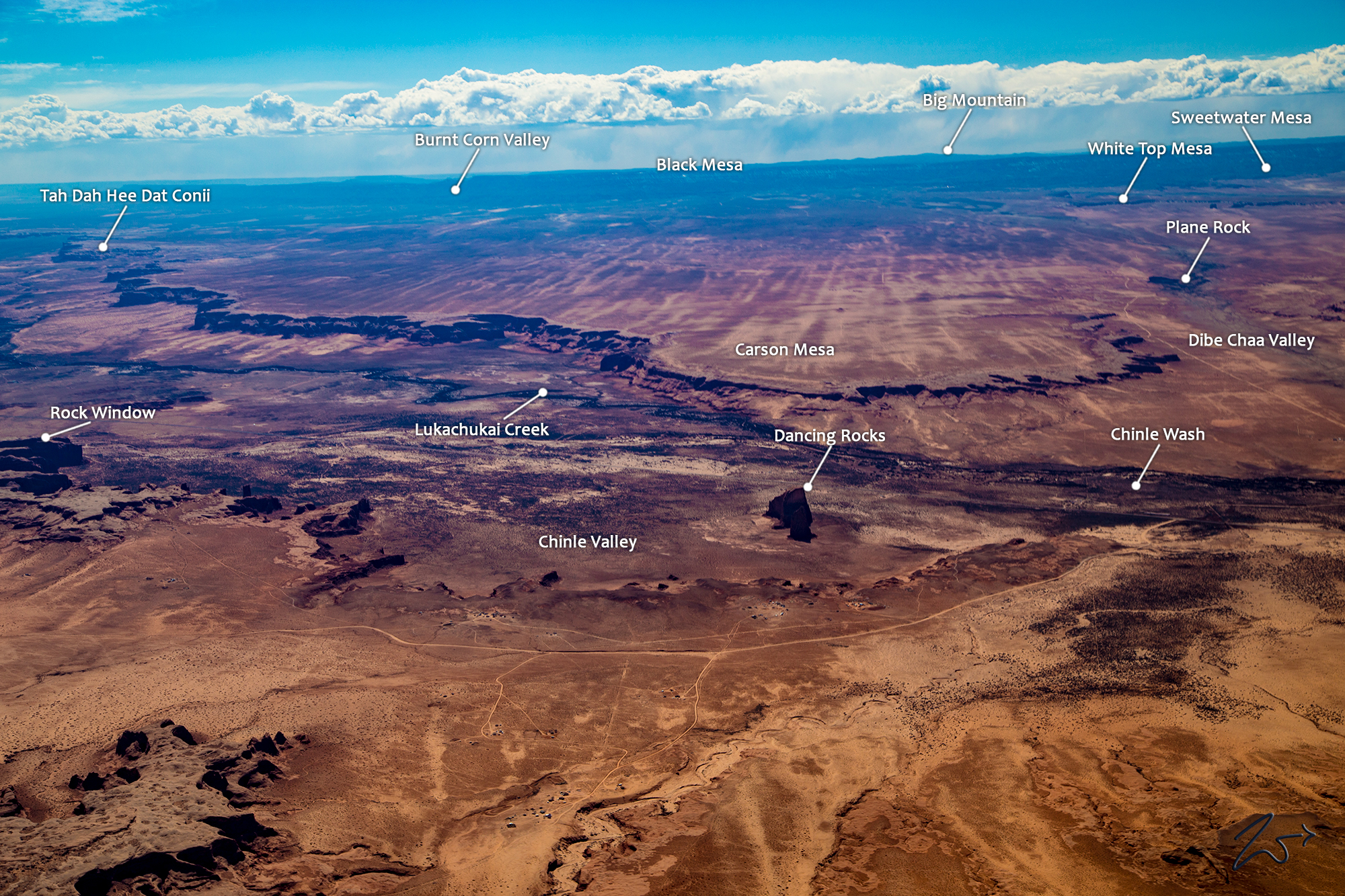 Ancestral First Nations Diné mythology states:
“Here is where Black God (in the Deer Hunting way myth), after coming from Big Oak Spring, threw a  buckskin over the rock to scrape off the hair. At this place, he tanned also buffalo skin, antelope skin, mountain sheepskin, and elk skin.  Lots of hair and wool were left under the rock when he got done. In accordance with this, he named the place. So you see, even the name was not given by men. This place was named by the gods. Those who knew the story of Deer Hunting way know what happened here. They call the place by  the name that the gods have given.”

In the image below, White Rock Wash cuts a path deep into Algrove Canyon while in the distance Rescue Rock Mesa sits above Massacre Point. 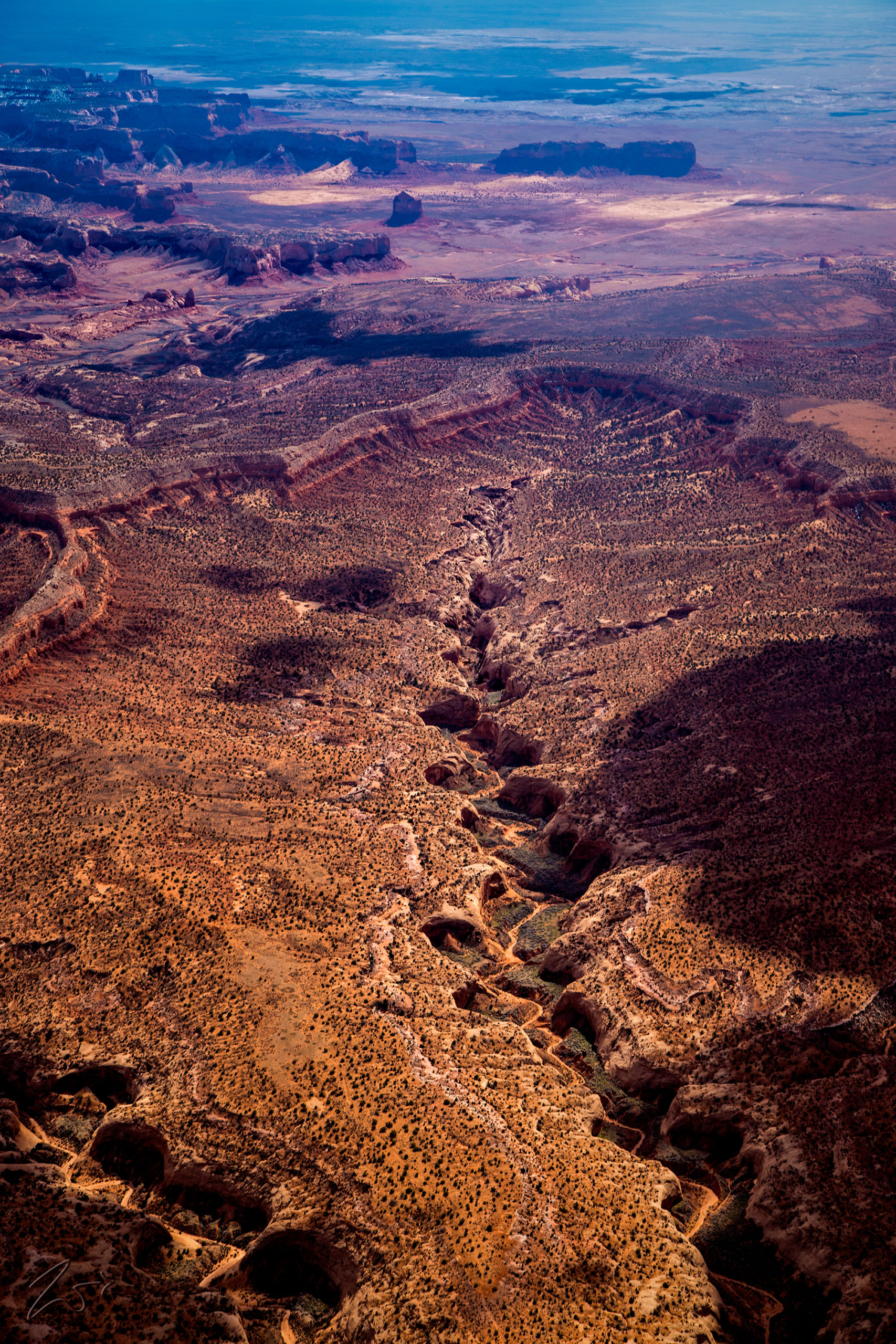 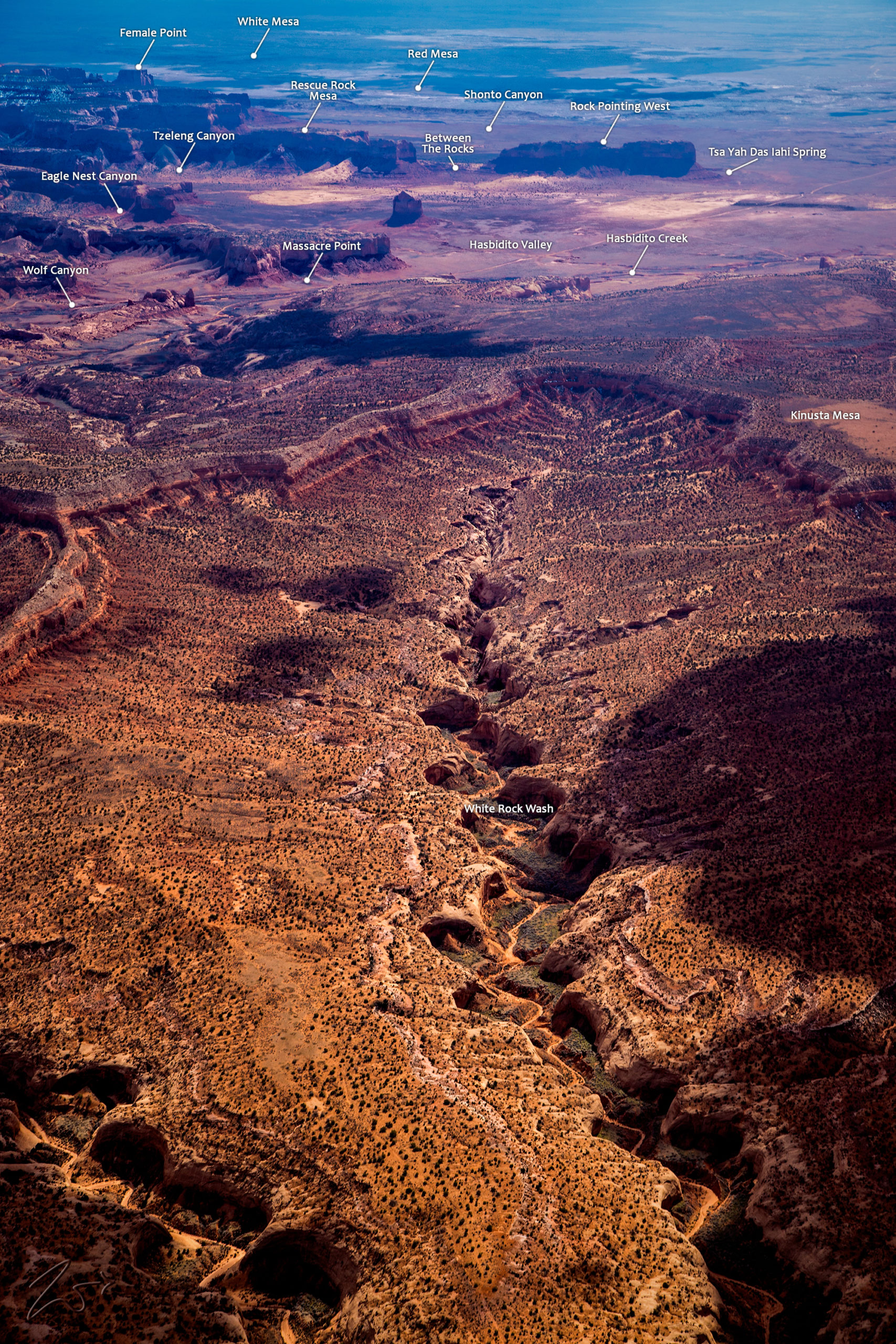