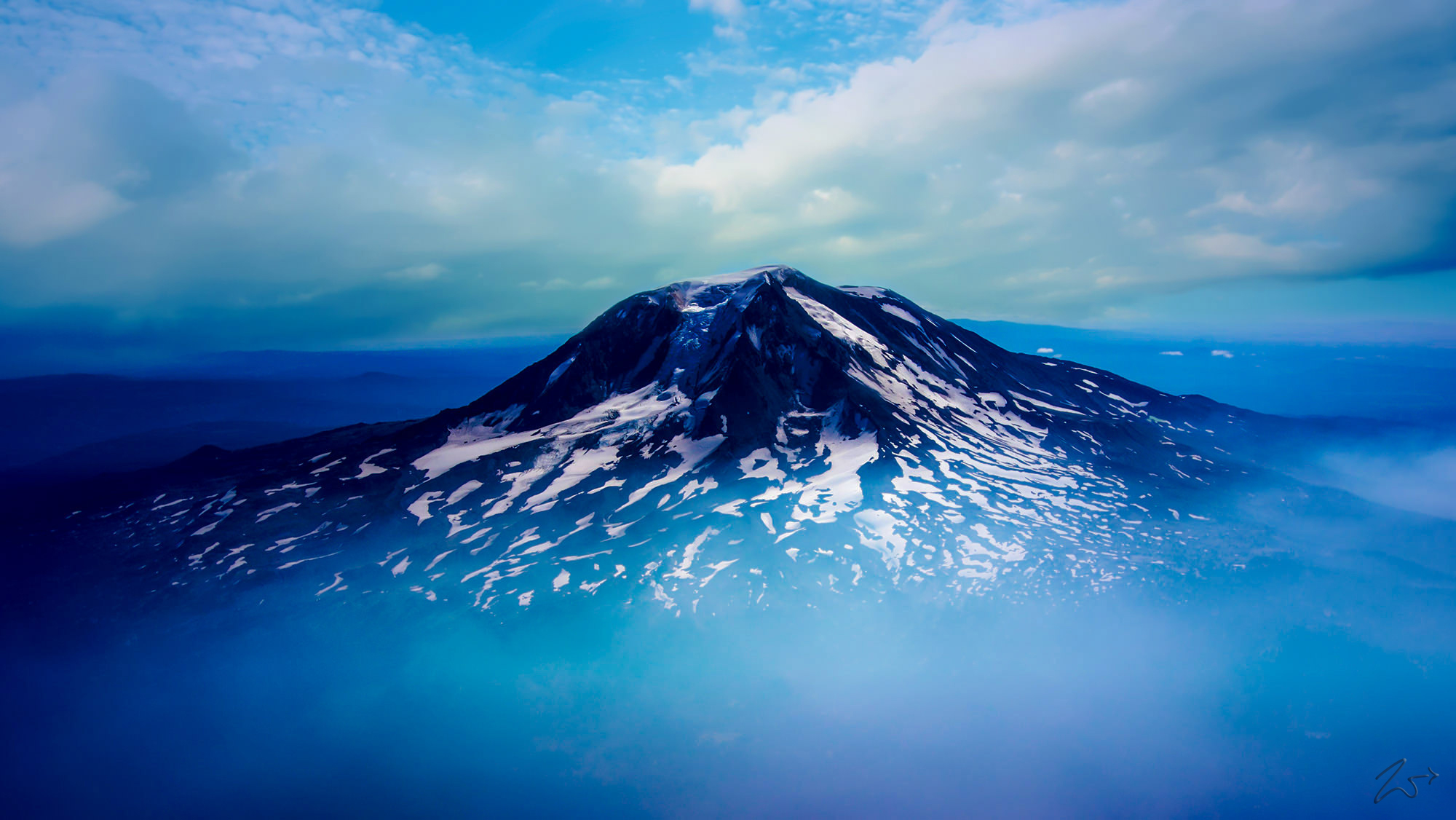 Known by some of the local First Nations Native tribes as Pahto or Klickitat, this is Mount Adams, just to the north of the Columbia River. And it is sleeping but potentially an active and dangerous stratovolcano in the Cascade Range. It has not erupted in over 1,000 years but is not extinct. Mount Adams is a member of the Cascade Volcanic Arc and is one of the arc’s largest volcanoes. It’s the second-highest mountain in the U.S. state of Washington, after Mount Rainier. It is in a remote wilderness area 34 miles (55 km) east of Mount St. Helens.

I lensed this image of Pahto (Mount Adams) at dawn, very early one fall morning whilst flying and exploring the wilderness area north of the Monte Cristo Range and east of the Yakama Nations Reservation.

The Mount Adams Wilderness comprises the upper and western part of the volcano’s cone. The eastern side of the mountain is part of the Yakama Nation. Adams’ asymmetrical body rises 1.5 miles (2.4 km) above the Cascade crest. Its nearly flat summit was formed as a result of numerous cone-building eruptions from separated vents around the top of the volcano.

Zedekiah: “I shot this early in the morning in the fall as I flew to the north from Hillsboro, Oregon on my way to Yakima, Washington. It has been written that the great white mountain represents the ways of the past – the pursuit of game on the foothills, the gathering of wild plant foods on the lower slopes and the snows which give life to everything. Most of all, Mt. Adams symbolizes the strength of the People, who in spite of years of adversity, forged a truly strong and great Nation.”

The Legend of  Pahto ~ Sacred Mountain

This is a legend told by Yakama Chief Jobe Charley back in the 1900s.

Back when the mountains were people, Sun was a man. He had five mountains for his wives. One was PlashPlash, where the Goat Rocks are now. Plash-Plash means “white spots.” Another was Wahkshum, west of Satus Pass. The others were Mount Adams (Pahto), Mount Rainier, and Mt. St. Helens. Sun traveled from east to west, of course. So Wahkshum was the first wife he talked to every morning. Plash-Plash was the second, and Pahto was the third.

Pahto became jealous of the other two and made up her mind to get rid of them. Jealous and angry, she fought them and broke down their high heads. All that is left of Plash-Plash is Goat Rocks. All that is left of Wahkshum is the mountain called Simcoe Mountain and the little huckleberry bushes on it. Rainier and St. Helens were so far away that Pahto left them alone.

Pahto was happy. Every morning she was the first wife Sun spoke to. She was the tallest mountain around, and she was proud and strong. But she was not satisfied. She crossed the river and went to the mountains south of her and brought back all their grizzly bears, black bears, elk, deer, pine nuts, huckleberries, roots, and herbs. From the river and creeks, she took the salmon and trout and put them in her streams that flow down the side. She planted the berries and the pine nuts and the roots all around her. She turned loose the elk, deer, and bears. That’s why there is plenty there today.

The Great Spirit was watching, and thought: “There must be a law that any wrongdoing shall be punished.” But Pahto was not punished right away. The other mountains saw how tall and strong she was, so they said, “We’ll not do anything about what she has done. We’ll just let it go.”

But Klah Klahnee, “the Three Sisters.” said among themselves, “Pahto is too proud and greedy. We must do something.” They talked to Mt. Hood, “Why don’t you destroy Pahto? Why do you let her get the best of you? You are tall and strong. Someday there will be people on the earth. When they find that we have let Pahto destroy us and steal from us, they will make fun of us.”

So, Wyeast (Mt. Hood) fought Pahto. “If I get the best of her, I will give back all she has stolen from us.” But first Wyeast said to Pahto in a nice way, “I want you to give back half of what you took from us, so our people in our part of the country can have the same food as you dear people have. I ask you in a nice way.” But Pahto was greedy. “No, I shall never give you anything.” So, they fought. . .

Up to that time, Pahto had had a high head. Wyeast hit her from the eastside and knocked her head off. Today on the north side of Pahto there is a pile of the fine rocks a half a mile long. These rocks were once Pahto’s head. Then Wyeast thought. “I’ll leave a little bit of everything here and there that Pahto took away, Pahto can’t have everything .” So Wyeast shared with the other mountains.

The Great Spirit saw all that had happened. He did not help Pahto, he thought she deserved all the punishment that she had got for she destroyed the heads of Wahkshum and Plash-Plash. That will be the law. If people do wrong, they will be punished in the same way.

But after Pahto lost her head she became mean. When she was angry, she would send a big thunder-storm and much rain. In the winter she would send big snows and in the spring there would be floods. All thru the Valley, there were lakes from the big floods. The first people had to live only in the mountains.

The Great Spirit was watching. He saw all that happened. He said, “I will make a new head for Pahto, so she will not be so mean. I will send White Eagle and his son Red Eagle to be your head. Don’t have hard feelings towards the other mountains and don’t flood the earth again. Remember you are the daughter of the Great Spirit.”

Pahto said, “I am glad you have given me the Eagles. I will forgive the other mountains and I will not flood the valley anymore.” Then she raised her right hand and said, “I did not know that the Great Spirit is my father. I am sorry for all the wrong things I have done.”

Then the Great Spirit replied, “I gave the world to you mountains, I put you here and there where I wanted you to. Some of you I made high, and some I made low. You should never destroy Plash-Plash and Wahkshum.” From that time on to this day it is really true in your belief and in my belief that the Great Spirit is the father…. Chief Jobe Charley

What Does The Story Mean

This traditional First Nations story has many historical elements to it that deal with various volcanic explosions over a very long period of prehistoric human occupation by ancient tribes that lived along the Pacific Coast and Columbia River area of Northern Oregon and Southern Washington State.

These tribal peoples witnessed numerous devastating volcanic events over thousands of years, so much so that these catastrophic happenings were incorporated into traditional tribal creations stories.

I lensed this image below of Pahto (Mount Adams) and Mount Rainier in the distance on a summer day flying and exploring the wilderness around the Monte Cristo Range. 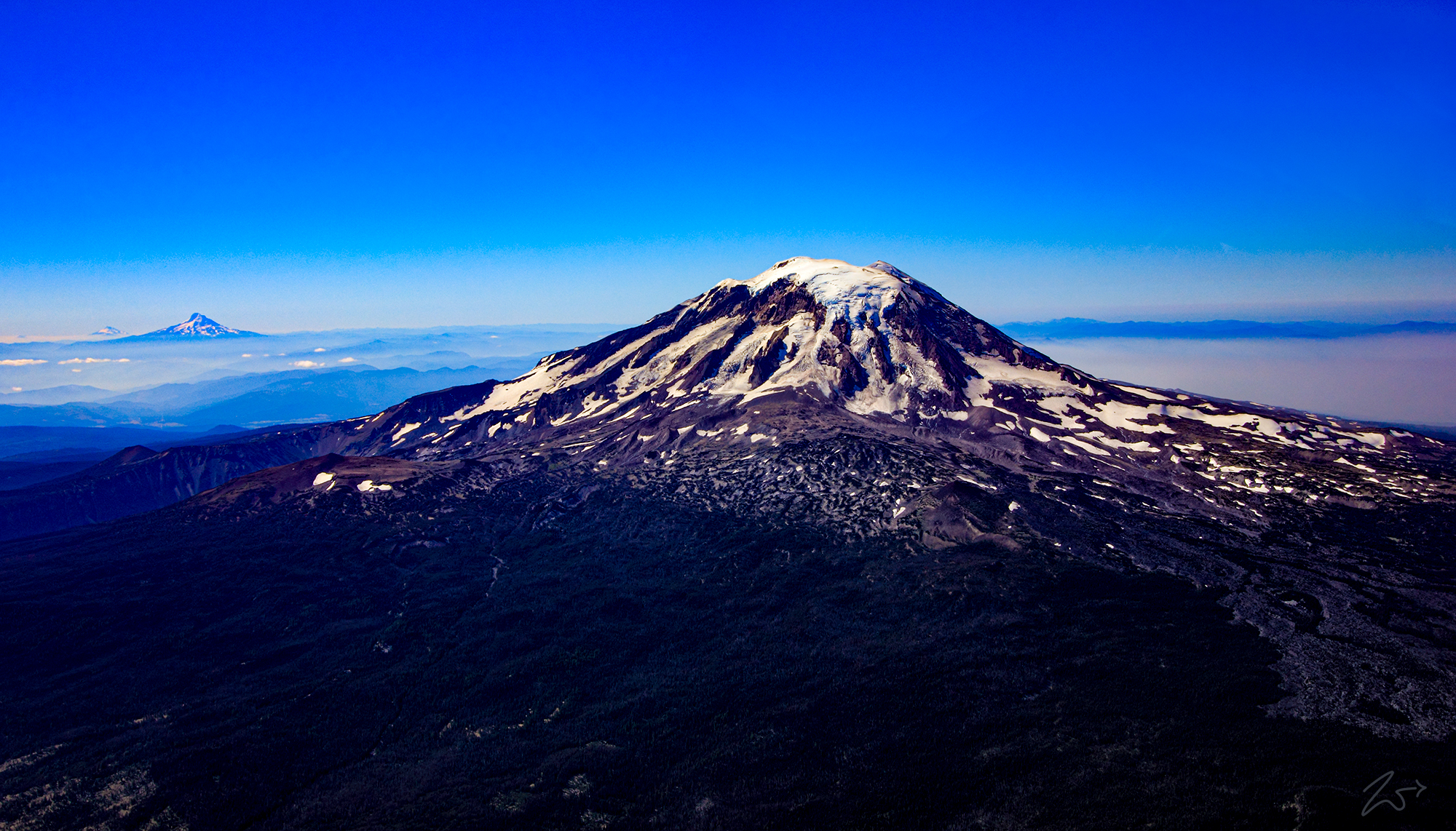