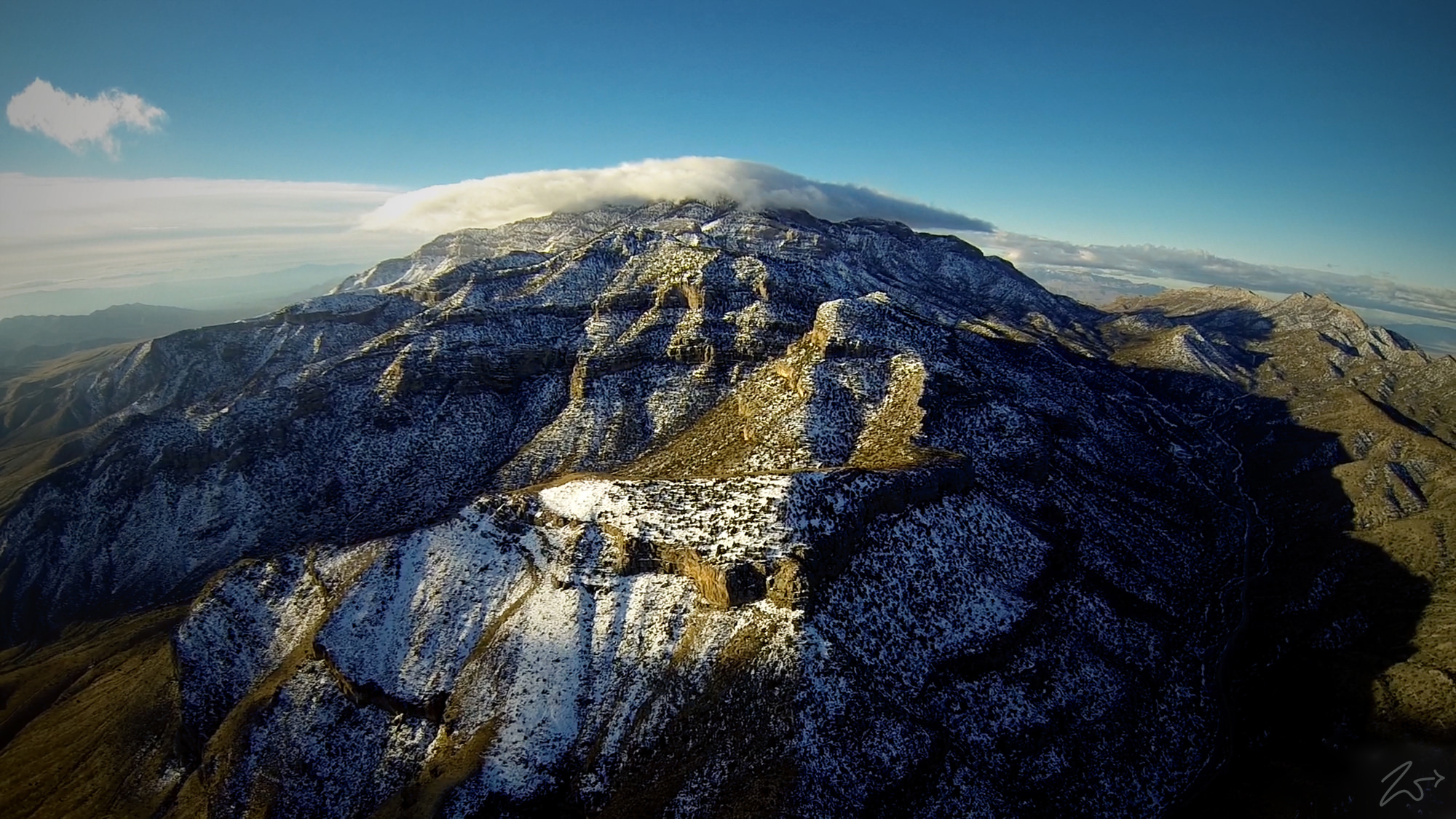 This is a slightly anamorphic photo of Mount Potosi, just a few miles southwest of Las Vegas, Nevada. Also called Double Up Mountain and Olcott Peak, this an 8,517 ft / 2,596 m high mountain with an interesting history for the area. One of the many things that have occurred on the mountain is the unfortunate crash of TWA Flight 3 back in 1942. This is the story of that crash that took the life of Carole Lombard and her mother along with 17 other passengers and three crew members.

TWA Flight 3 was flying a transcontinental route from New York to greater Los Angeles with multiple intermediate stops, including Indianapolis, St. Louis, and Albuquerque, with a final destination at Burbank, California.

At 4:00 local time on the morning of January 16, in Indianapolis, Indiana, Carole Lombard, her mother Elizabeth Knight, and her MGM press agent Otto Winkler, boarded Flight 3 to return to California. Lombard, anxious to meet her husband Clark Gable in Los Angeles, was returning from a successful War Bonds promotion tour in the Midwest, where she helped raise over $2,000,000.

Upon arrival in Albuquerque, Lombard and her companions were asked to give up their seats for the continuing flight segment, to make room for 15 U.S. Army Air Corps personnel flying to California. Lombard insisted that because of her War Bonds effort, she, too, was essential, and convinced the station agent to let her group reboard the flight. Other passengers were removed, instead, including violinist Joseph Szigeti.

Based on testimony from a Civil Aeronautics Board inquest, Lombard not only wouldn’t budge but threw her weight around — and got her way after citing that she had just sold $2 million worth of bonds in a single day and threatening to make calls to the big shots who had gotten her on the plane in the first place. Because of the weight of Lombard’s copious luggage and equipment carried by the flyers, the plane could only carry a limited amount of fuel leaving Albuquerque — not enough to make it to the final destination, Burbank, Calif.

The original flight crew was replaced with a new one at Albuquerque. A refueling stop had been planned in Winslow, Arizona, because of the higher passenger load and forecast headwinds. The captain, however, decided while en route to skip the Winslow stop and to proceed directly to Las Vegas.

After a brief refueling stop at what is now Nellis Air Force Base in Las Vegas, the plane took off on a clear night for its final leg to Burbank. Fifteen minutes later, flying almost seven miles off course, it crashed into a nearly vertical cliff on Potosi Mountain in the Spring Mountain Range at 7,770 ft, about 80 ft (24 m) below the top of the cliff and 730 ft (220 m) below the summit, killing all on board instantly.

The accident was investigated by the Civil Aeronautics Board. Eyewitness and other evidence suggested Flight 3 proceeded from its departure in Las Vegas along essentially a straight line, 10° right of the designated airway, into high terrain that rose above their flight altitude of 8,000 ft (2,400 m). 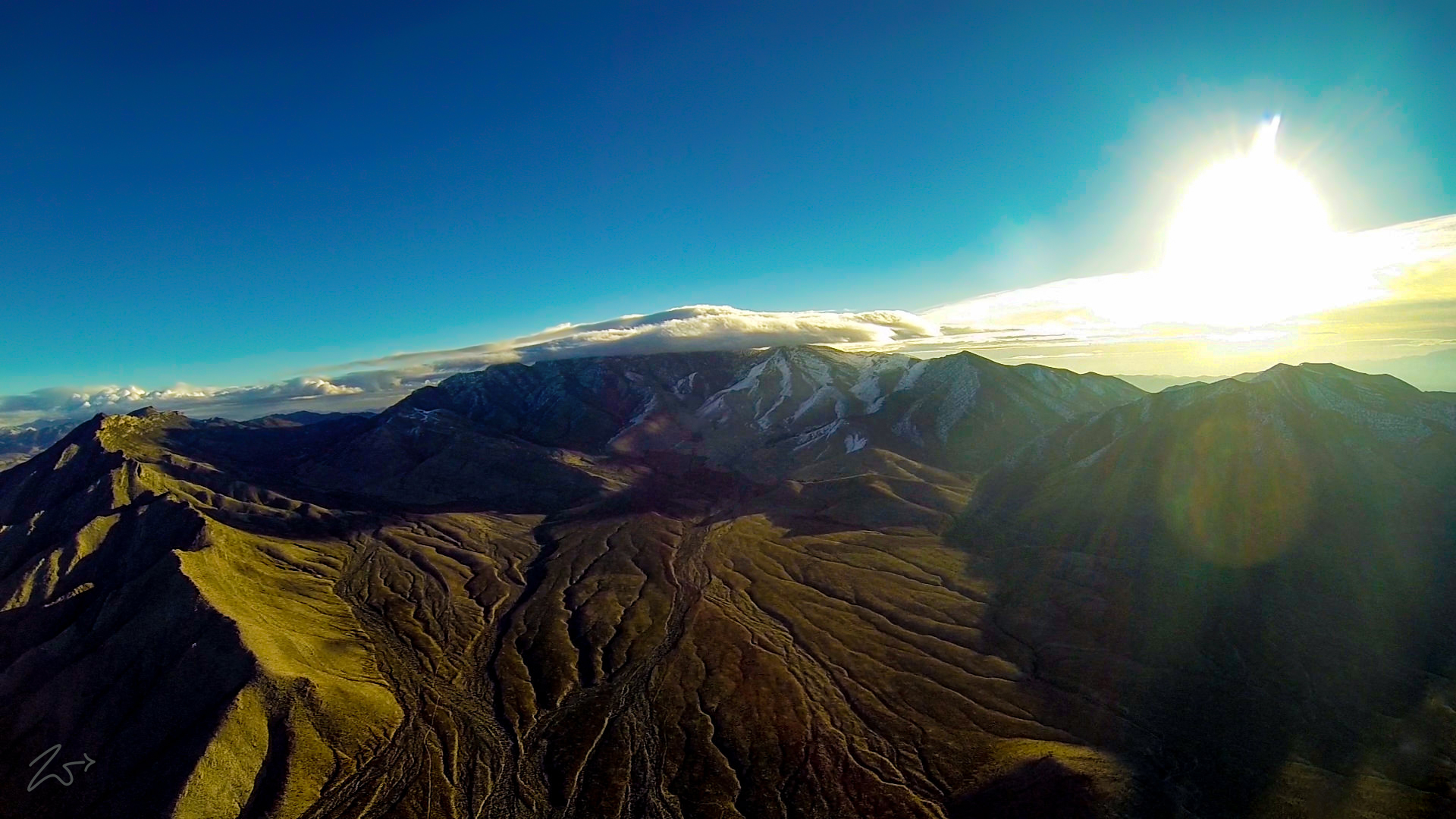 This indicated to investigators that the crew was not using radio navigation to follow the airway (defined by the low-frequency range), which would have provided them safe obstacle clearance, but was instead using a compass heading. Visibility was generally good, but since most airway light beacons had been turned off because of the war, they were not usable, although one important beacon was, in fact, operating normally.

A key piece of evidence was the flight plan form, completed by the first officer in Albuquerque (but not signed by the captain, despite a company requirement to do so). In the form, the planned outbound magnetic course from Las Vegas was filled out as 218°, which is close to the flight path actually flown by the crew to the crash point. Since this course, flown at 8,000 ft, is lower than the terrain in that direction (which rises to about 8,500 ft (2,600 m)), the board concluded it was clearly an error.

The board speculated that since both pilots had flown to Burbank much more frequently from Boulder Airport (BLD) than from Las Vegas, and that from Boulder Airport an outbound magnetic course of 218° would have been a reasonable choice to join the airway to Burbank, the crew likely inadvertently used the Boulder outbound course instead of the appropriate Las Vegas course. Boulder Airport was not used as a refueling point on this trip since it had no runway lighting.

To test their hypothesis, the CAB asked to review some other completed TWA flight plan forms for flights between Albuquerque and Las Vegas. Surprisingly, they discovered another form, of an actual flight, which also specified the same incorrect 218° outbound course from Las Vegas as the accident flight. TWA’s chief pilot testified that the course filled out on that form was “obviously a mistake.”

The CAB issued a final report with the following probable cause statement:

Upon the basis of the foregoing findings and of the entire record available at this time, we find that the probable cause of the accident to aircraft NC 1946 on January 16, 1942, was the failure of the captain after departure from Las Vegas to follow the proper course by making use of the navigational facilities available to him.

1.) The use of an erroneous compass course

2.) Blackout of most of the beacons in the neighborhood of the accident made necessary by the war emergency

3.) Failure of the pilot to comply with TWA’s directive of July 17, 1941, issued in accordance with a suggestion from the Administrator of Civil Aeronautics requesting pilots to confine their flight movements to the actual on-course signals.

This image below has a red arrow indicating the airplane crash site. 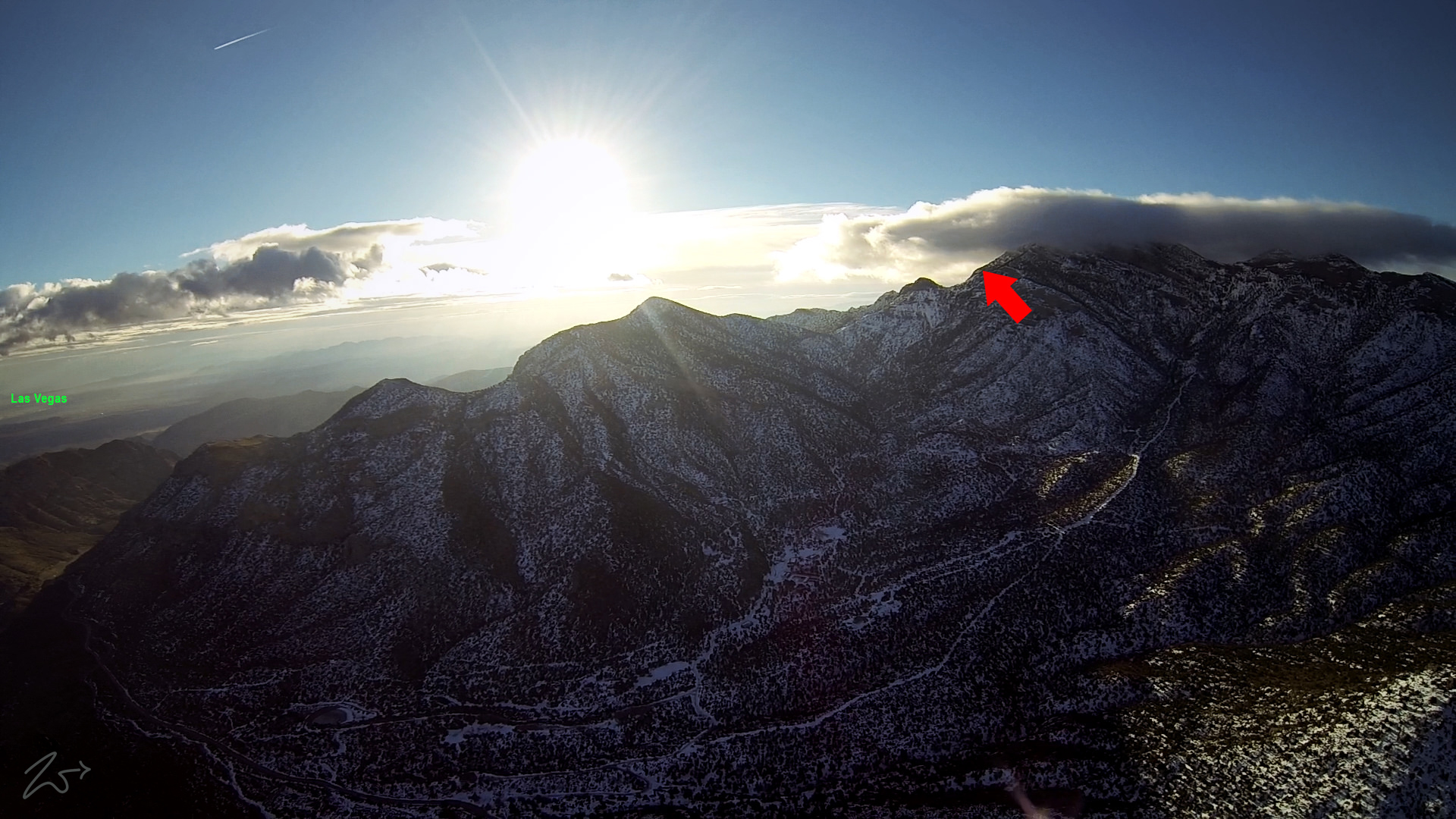