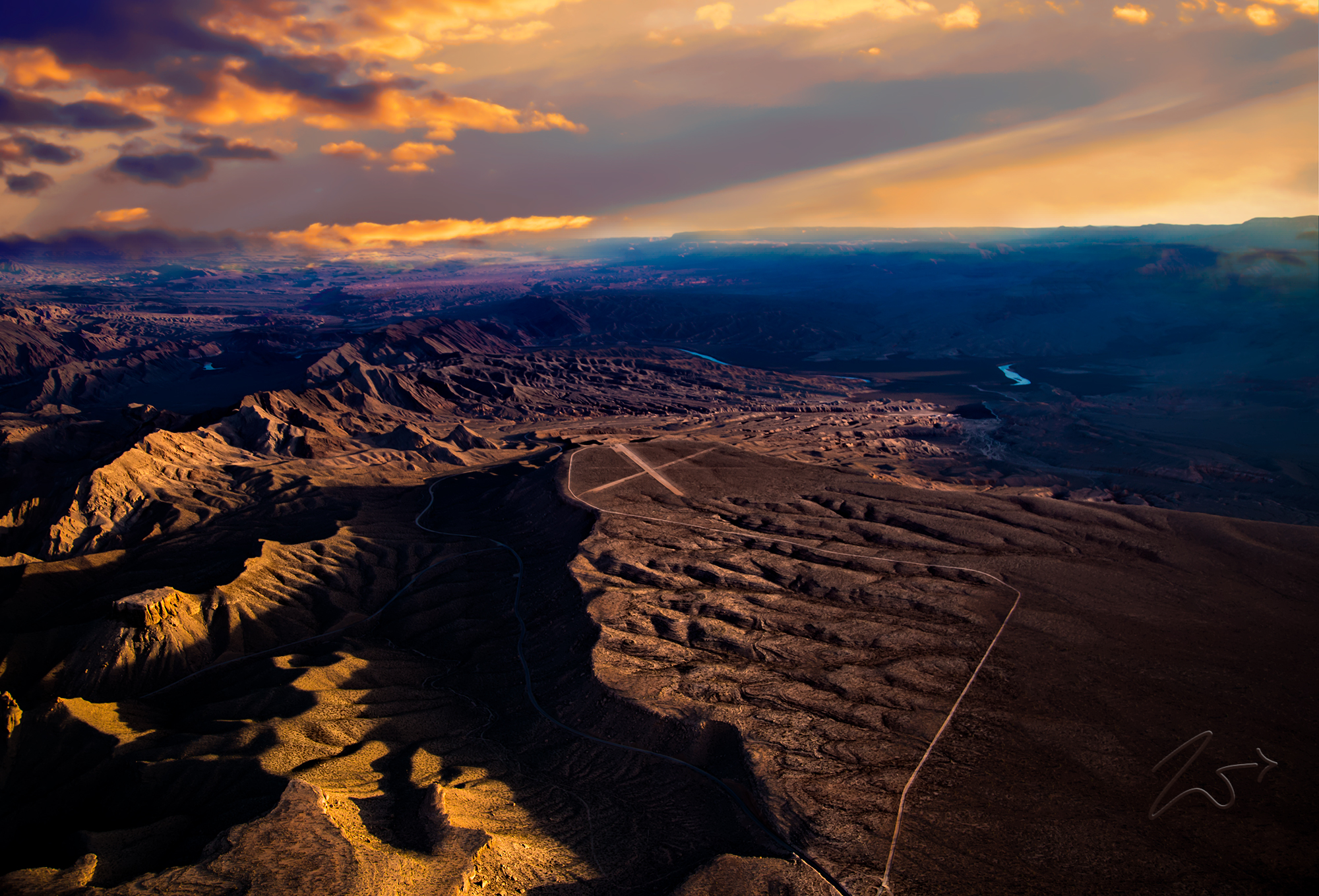 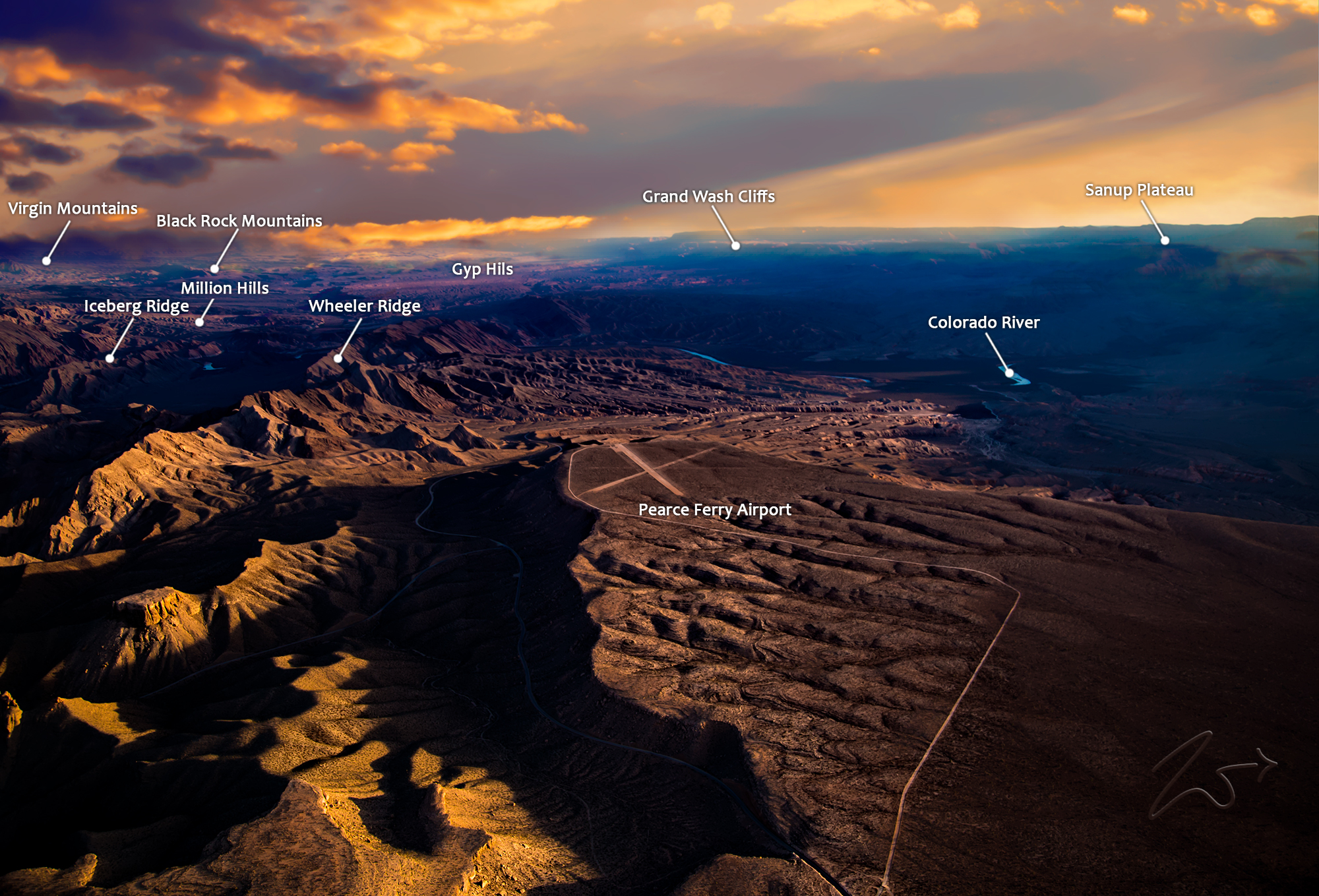 The airport sits above the Colorado River you can see in the middle of the image. This is where the river exits the Grand Canyon and flows into Lake Mead before heading south. Pearce Ferry Airport is up on the edge of Grapeview Mesa, right above Pearce Wash and Pearce Bay, and of course Pearce Ferry Rapids on the Colorado River. The FAA airport ID for Pearce Ferry is L25. You can see in the image there were once 3 operational runways but now only one is usable and clear of vegetation. Runway 01/19 remains in good condition with a relatively smooth dirt surface; 2,900 ft long by 110 ft wide.

Zedekiah: “I camp here whenever I’m shooting in the area and have tried on numerous occasions to film part of my project here but it is near impossible because of the steady stream of tourist helicopters from Boulder City ferrying folks on tours through the Grand Canyon. Seems like seeing me camping on the edge of a cliff with an airplane is cause for them to hover and allow their passengers to take pictures. One day while I was practicing take-off and landings over the edge of the cliff I turned back towards the strip and there were 6 helicopters lined up around the airport watching my pattern work LOL! Nothing like an audience to make you fly right!!!!

The other 2 runways were pretty much abandoned years ago. It’s a great place to go camping or star gazing. It sits just north of Meadview, Arizona, and is part of the Lake Mead Recreation Area and within the airspace of the Grand Canyon National Park. There is a special 3nm airspace notched out around it so you can take off and land safely there.

Pearce Ferry Airport is owned and maintained by the National Park Service. It was officially made operational as a designated airport in 1980 but I’ve met old-timers who have been landing on that plateau back in the ’40s and ’50s. It has been part of the bush pilot community for a long time. There are no facilities on-site so you must bring everything you need with you. There are no garbage bins on site either so whatever you bring please take back out.

I lensed that image while trying to fly into Boulder City Airport very early one morning after camping out with my airplane and exploring the desert around the Kaibab National Forest. The weather was too dangerous to fly into for my small bush plane so I decided to simply land and sit out the storm, in the hope that it would eventually pass over and allow me to continue my journey.” 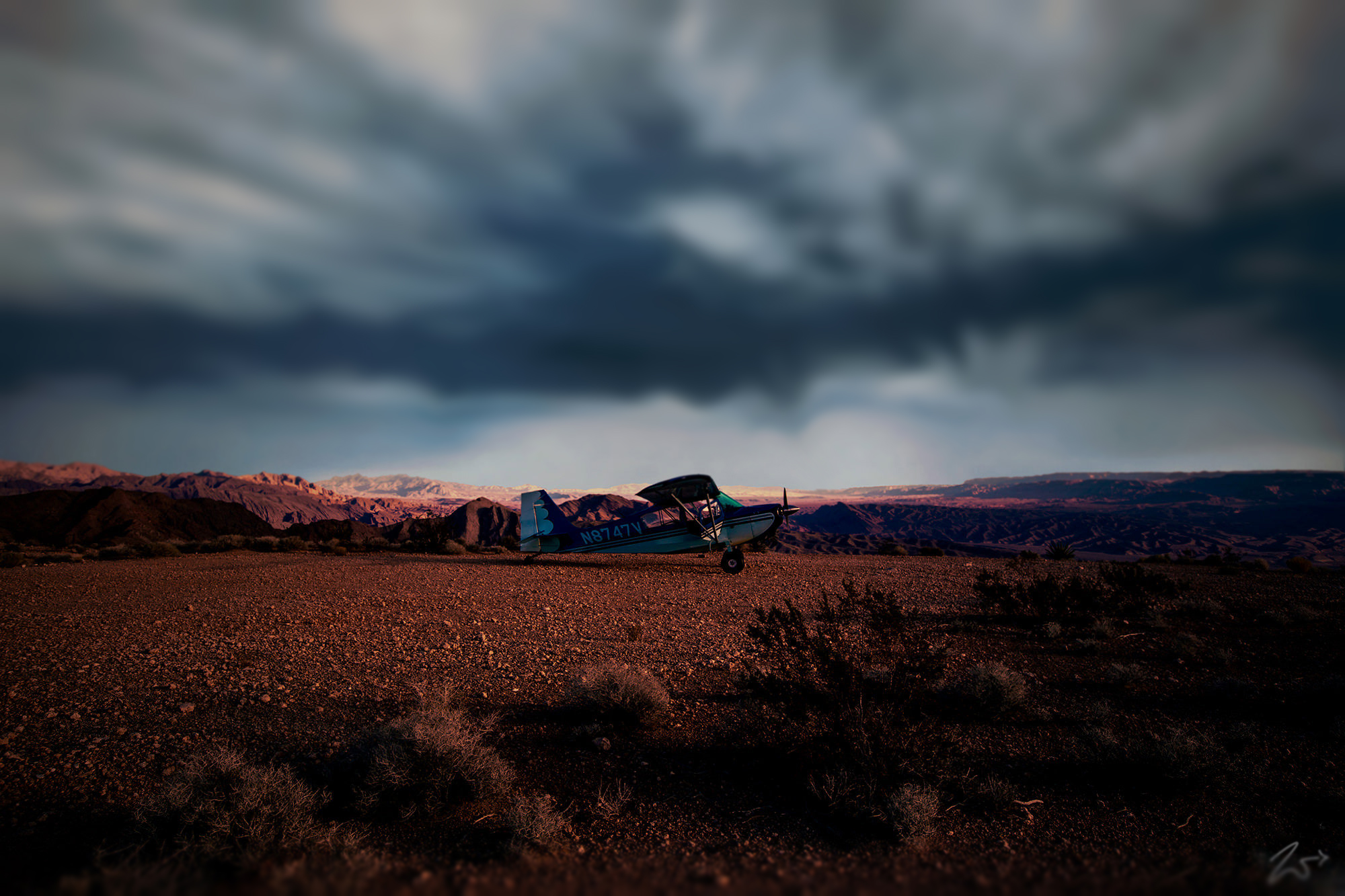 After landing and securing the airplane to keep the winds from blowing it over the edge of the cliff I was parked next to, I started roaming around the mesa top checking out the different plant’s scenery. The storm just got worse over time and after a while, I realized I was not going to be able to continue flying out of here this day.So I got busy and unpacked my gear, I already had camping equipment with me from my journey so I set up my tent next to the airplane just about the time it started raining really hard. I spent the day listening to music on my headphones and reading while chilling out in my tent.

It was very relaxing! I had decent wireless access up there on top of the mesa so I did a bunch of research about Pearce Ferry.”

Pearce Ferry was so named because in 1857 a Mormon settler named Harrison Pearce was ordered to set up a ferry there (it was known then as the Ute Indian Trail River Crossing). He was commanded by the LDS  church elders to build it and then stay and run it as a punishment (or penance) for his participation in the Mountain Meadows Massacre in 1857.

He set up the crossing in 1860 and ran a small but very important ferry service taking travelers and their horses and wagons across the river. What an interesting history!

“Early the next morning, as the sun was coming up on this now, beautifully clear day, I decided to set up my film cinema rig and shoot the surrounding area from my perch on the mesa cliffs overlooking the river. I set up my other camera to remotely shoot the image below, showing how I work in the wild.” 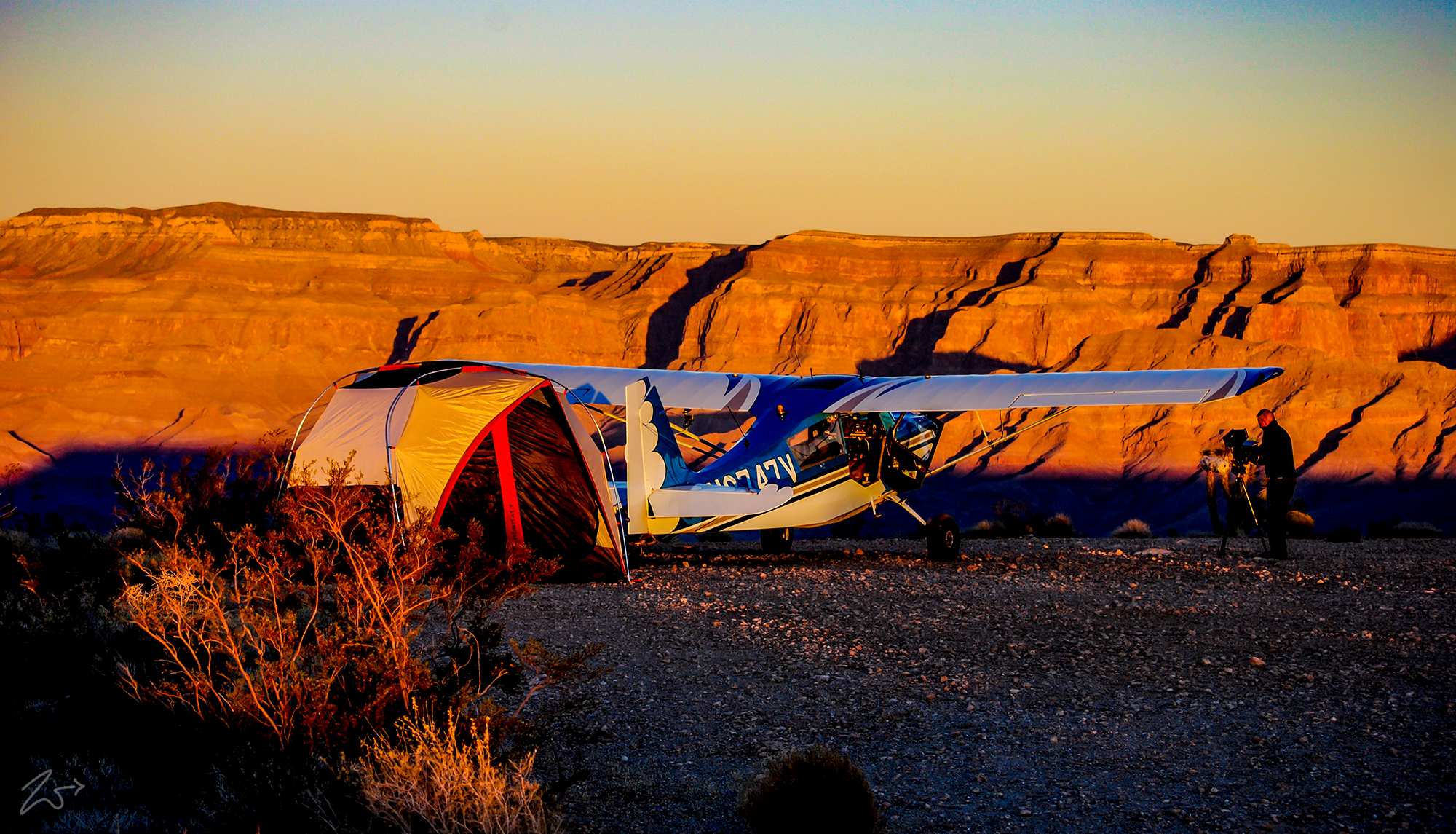