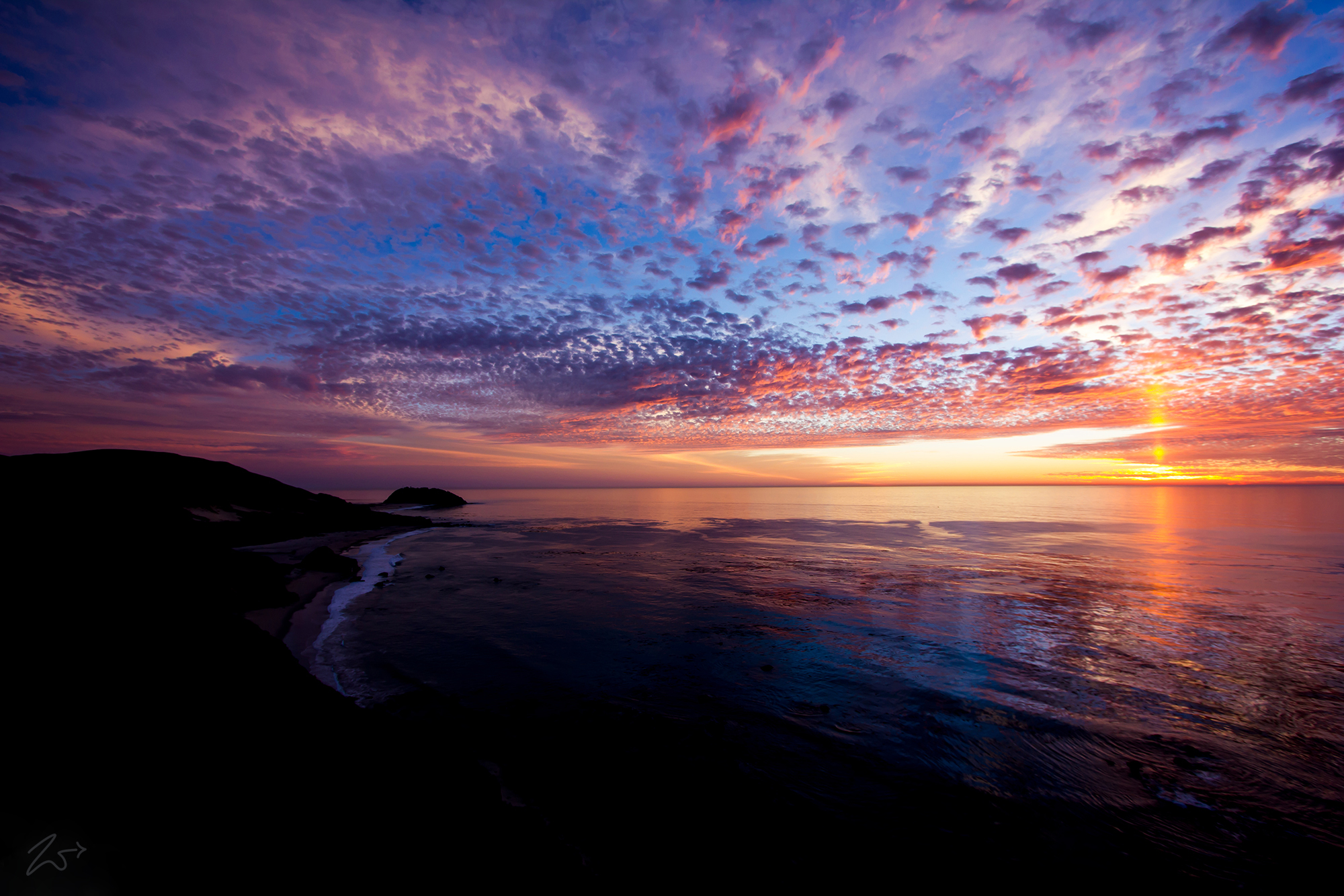 A quintessential California Coastal Pacific Ocean Sunset. To the left of the image is; Point Sur, and the California Sea Otter Game Refuge on the Pacific Ocean Coast of Big Sur, California. An interesting aspect of this photograph is that the sun is actually not in this image at all.Zedekiah: “The sun had already set about 15 minutes before I took this photo and was now over the horizon, but the sunlight is reflecting on the clouds which then is reflected down onto the ocean below. This is creating what I call a “Sun Sprite” effect.”

This serene setting holds a tumultuous past as Point Sur is actually a large volcanic rock that has been a hazard to passing ships since the west coast was explored back in the late 1500s.  Visible at sea for 10 miles (16 km) from the coast it was first mentioned in the logs of Juan Rodríguez Cabrillo in 1552. The explorer Sebastian Viscaino visited the area in the early 1600s, and his 1603 map names the promontory “Punta que Parece Isla” which means “the Point that looks like an island”. Then in 1769, the explorer Miguel Costansó from the Portolá expedition, renamed the point “Morro de la Trompa” because it looked like a rock in the shape of a trumpet.

Finally, it was given the name “El Sur” meaning “The South” when it was noted on a land grant named Rancho El Sur given by Governor José Figueroa to Juan Bautista Alvarado on July 30, 1834. In 1793, British explorer George Vancouver described the point as a “small, high, rocky lump of land nearly half a mile from the shore.” With the Gold Rush of 1849, the increased shipping traffic resulted in many ships crashing into the rocks along the point shoreline. In 1889 the first of many lighthouses finally opened, providing safer passage. It was renamed Moro Rock for a while until the U.S. Coast Survey renamed it, Point Sur, in 1851. That name stuck and is the name used today.

The area is the ancestral home to the First Nations Esselen Tribe which were a very small group of which there are virtually no contemporary records. They were a tiny tribe estimated to be around 500 to 1200 tribespeople living in this steep, rocky coastal region when Spanish explorers arrived. The tribal moniker “Esselen” is most likely derived from the name of their main village known as Exse’ein, which likely derived from a tribal location known as Ex’selen, meaning “the rock,” which is in turn derived from the phrase Xue elo xonia eune, “I come from the rock.” The rock being Point Sur, they believed all life came from this volcanic mountain.

They lived in dome-shaped dwellings made with wooden frames covered with bundled mats of tules. The homes could be as large as 55 feet (17 m) across and were occupied by three or four families. They used a fire pit in the middle of the dwelling with a vent or chimney in the center that allowed smoke to escape. In the nearby mountainous regions where the redwood trees grew in abundance, they built conical houses from redwood bark attached to a frame of wood. One of the main village buildings, the sweat lodge, was built down into the ground, with walls made of earth and the roof made from the local brush. They used boats made from tule to navigate around the bays propelled by double-bladed paddles.

The Esselen left their handprints on rock faces in numerous remote places, including the Pine Valley area and a site a few miles east of Tassajara, California where about 250 handprints were discovered located in a rock shelter, there are more to be found elsewhere around the Tassajara Valley.

Interestingly, the Esselen believed that rocks held memory. So when they placed their hand into a hand that had been carved on the rock from the past, they could “tune in to” everything that had ever happened at the site before. Esselen people gave names to everything, including individual trees, large rocks, paths, even different portions of a path. They believed everything, including the stars, moon, breeze, ocean, streams, trees, and rocks were alive and had power, emotion, intelligence, and memory.

The entire population was assumed to have been wiped out over time but some tribal members emerged from the forest to work in nearby ranches in the early and late 1800s. Descendants of the Esselen still live in the Monterey Peninsula area and nearby regions.