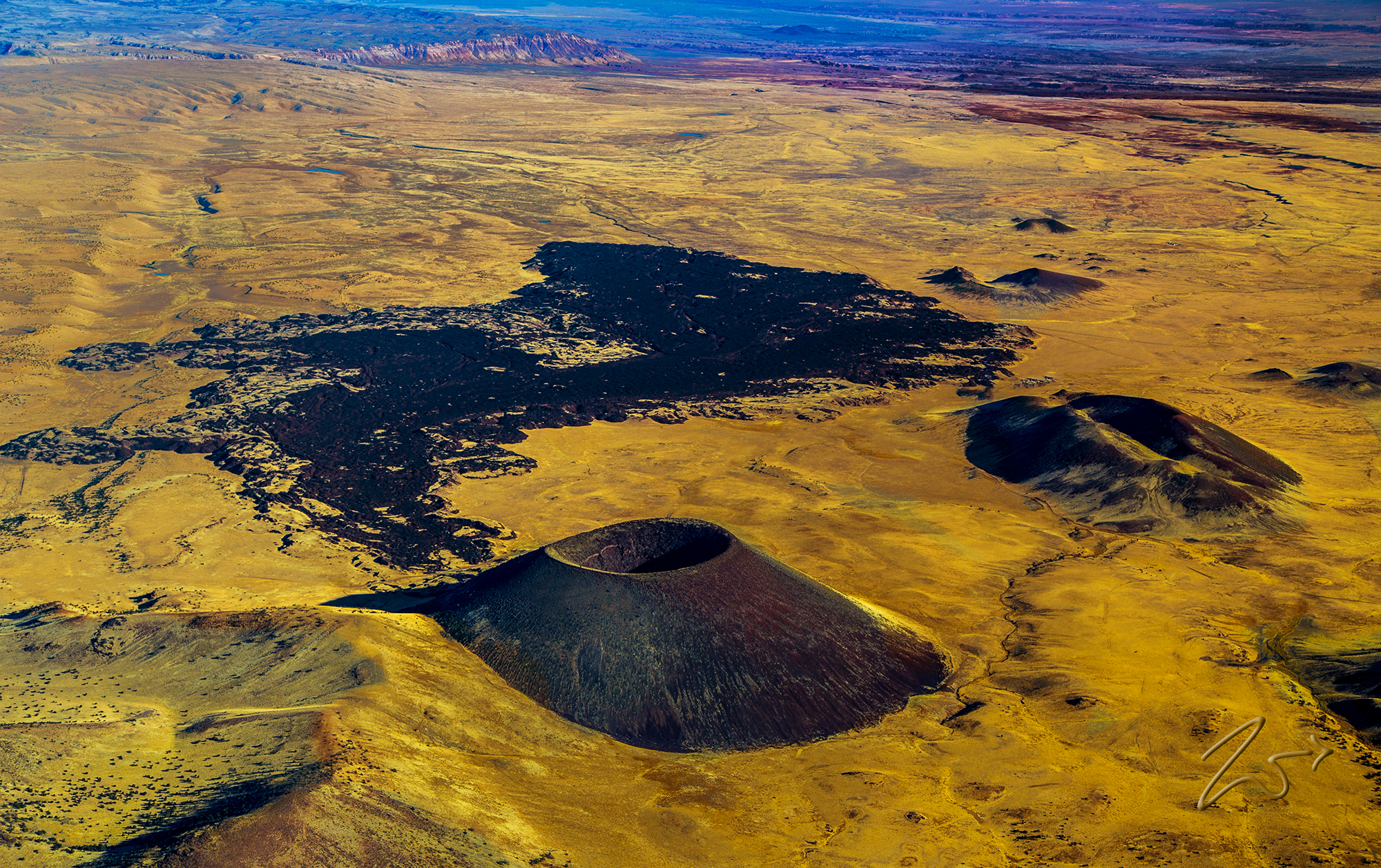 This is the ancient volcanic crater north of Flagstaff, Arizona known as S.P. Crater. This is a cinder cone volcano in the San Francisco Volcanic Field, 25 miles (40 km) north of Flagstaff and is surrounded by several other cinder cones that are older and more eroded. It is a striking feature with a well-defined lava flow that extends for 4.3 miles (7 km) downhill to the north. The naming of this unique crater is a bit of folklore from the Old West. C. J. Babbit, an 1880’s rancher and early landowner of the mountain, expressed his opinion that the mountain resembled a pot of excrement (Shit Pot), and this became the accepted name.

Zedekiah: “I captured these images while flying north of Flagstaff on my way to Kingman, Arizona. This was shot very early in the morning hence the golden glow of the colorful desert sands. This is only a short distance from the Painted Desert.”

When viewed from certain angles on the ground, the combination of the smooth round shape of the cone, the dark lava spatter on the rim, and the long dark lava flow extruding from the base does indeed resemble the unfortunate name. But historically, mapmakers refused to spell out the full name, and the mountain has been shown on maps and other literature with the abbreviated name for ages.

Just next to S. P. Volcano is Colton Crater. As ancient volcanoes go, this one must have had as one geologist called it “one psychotic volcanic eruption!” It is interesting to realize that this volcanic crater is three times the width and depth of the pit left behind by the largest nuclear bomb ever detonated on earth.

Between 200,000  and 800,000 years ago a column of rising magma split the earth open and the volcano that would become Colton Crater above in this image began its eruption.  Initially, it was your typical run of the mill cinder cone type volcano, chugging away and spewing out a sizeable mound of cinders and hot lava splatter.

Over a relatively short (in geologic time) period of a few years around 800 feet of basal-tephra accumulated in multiple successive layers still visible along the crater walls, primarily on the interior slope on the south side of the crater. 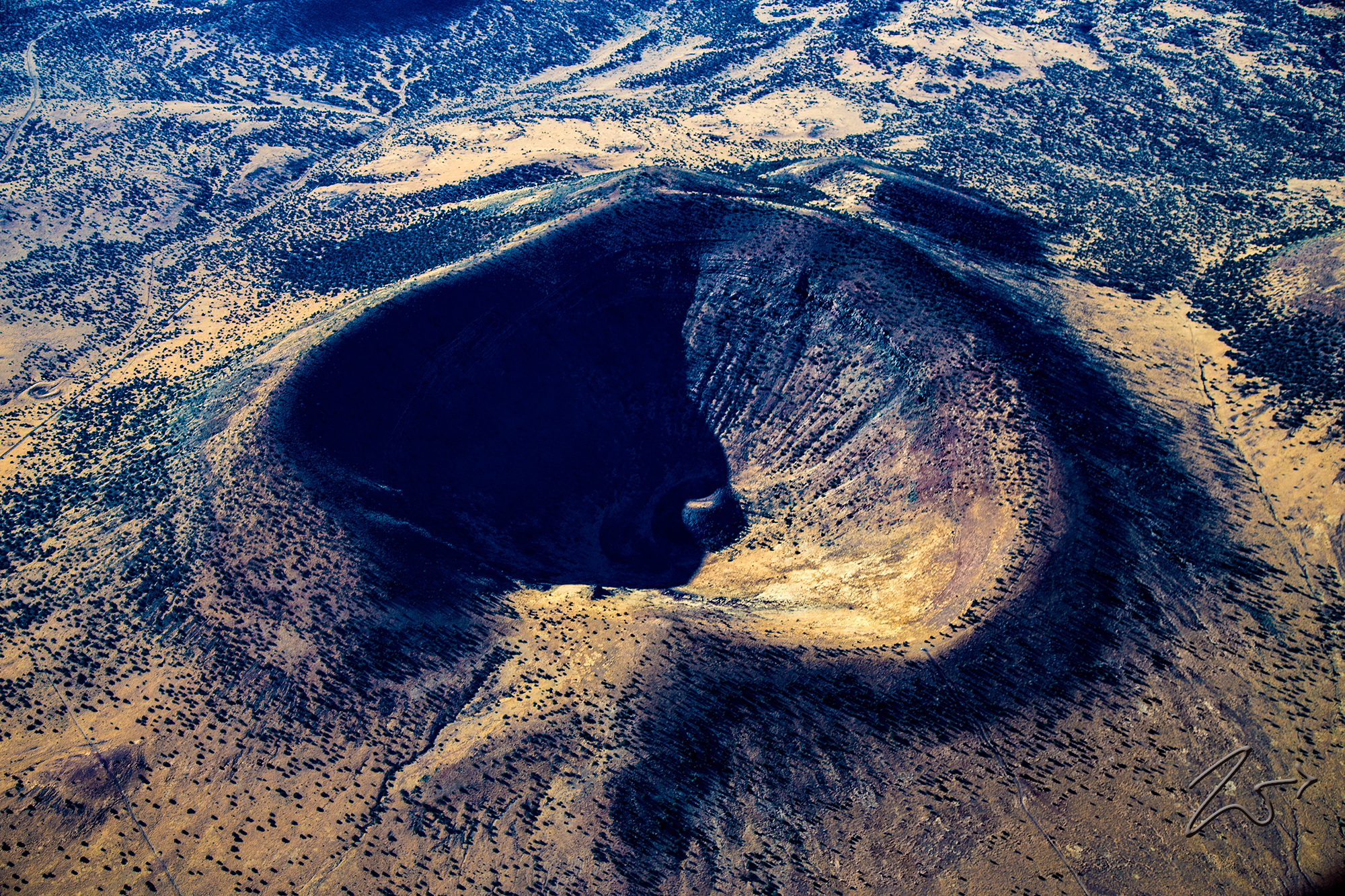 The full life cycle most likely only lasted something less than 10 years, based upon a comparison to a  very similar crater named Paricutin, which is a larger cinder cone located in Mexico, which was a recent occurrence that was well documented by volcanologists. Beginning in 1943 and ending in 1952 a 1,400-foot cinder cone was formed and provided a working case study for volcanologists. It provided a wealth of information.

As Colton (the volcano above) grew and began to fill with cinders, a  branch separated from the main vent and formed two parasitic cones, both located on the south side of the main cinder cone, one of them actually growing slightly taller than its parent volcano.

This caused one of more lava flows to be forced underneath the north and northeast cinder walls. Lighter and more buoyant cinders were then elevated and floated away on top of the lava flow in a process known as “rafting”. At least one if not two low spots on the crater rim were created in this way.

Rafting is a common occurrence in many cinder cones but with Colton  Crater it occurred in such an unusual manner that at least 200 feet of one of the tephra layers (Tephra is fragmental material produced by a  volcanic eruption) in the cinder wall above the lava flow were drastically undermined, breaking off from its horizontal plane and rotating 90° until it stood vertical!

The visible monolith that remains today is often mistaken for a dike, a vertical conduit that feeds magma to a volcano.  The lava, carrying its rafted cinders, flowed a distance of four miles to the north. SP  Mountain, (which I have posted about before on Steemit) is actually a  much younger volcano and is sitting on a thick layer of lava that came out of Colton Crater.

The flow is not well defined and difficult to see because over time it was covered by a thick layer of soil, then grass and cedar trees have grown on it, much like you see in the image above,  with trees growing around the rim.  So, we have around 800 feet of cinder cone, two separate parasitic cones growing within it, 4 miles of lava flowing carrying or rafting cinders and a 200′ slab of tephra rim violently rotated 90° to a  vertical position! It is unusual and amazing that this happened at one volcano we are just getting started! The most cataclysmic event is yet to come.

To have a better understanding of what happened next one needs to understand the geology beneath Colton Crater. This is located just north of Flagstaff, Arizona and the entire surrounding area is literally covered by a veneer of volcanic lava flows.  However, beneath the lava is a 350′ thick layer of Kaibab Limestone.  This limestone layer is visible at the Grand Canyon as the top layer of sedimentary rock. Limestone is calcium carbonate rock which is slowly dissolved by acidic rainfall over a long period of time. Subsequently,  limestone is the most common rock layer that caves, caverns, and sinkholes form in.

Volcanologists are not clear on exactly how it happened, but somehow  Colton Crater had a significant quantity of water which channeled through an underground passage in the limestone and suddenly and explosively poured into the magma chamber causing a phreatomagmatic  (steam/magma) eruption, as the water flashed to steam it expanded 1,700  times. The earth heaved in a gigantic explosion that violently blasted the entire guts of the volcano into the sky. A sizable earthquake radiated away from the site as its pyroclastic mushroom cloud full of molten magma pulverized limestone and shattered tephra surged skyward into the stratosphere.

The intense blast excavated all the limestone strata along with any lava above it and the core of the original cinder cone.  This left behind a crater that is hundreds of feet deeper than the volcano was tall. And what goes up must come down! As the now pulverized magma and rock debris fell back to earth in a red super-heated rain, it was still so hot that it formed a layer of welded tuff on the rim of what was left of the now bare cinder cone. 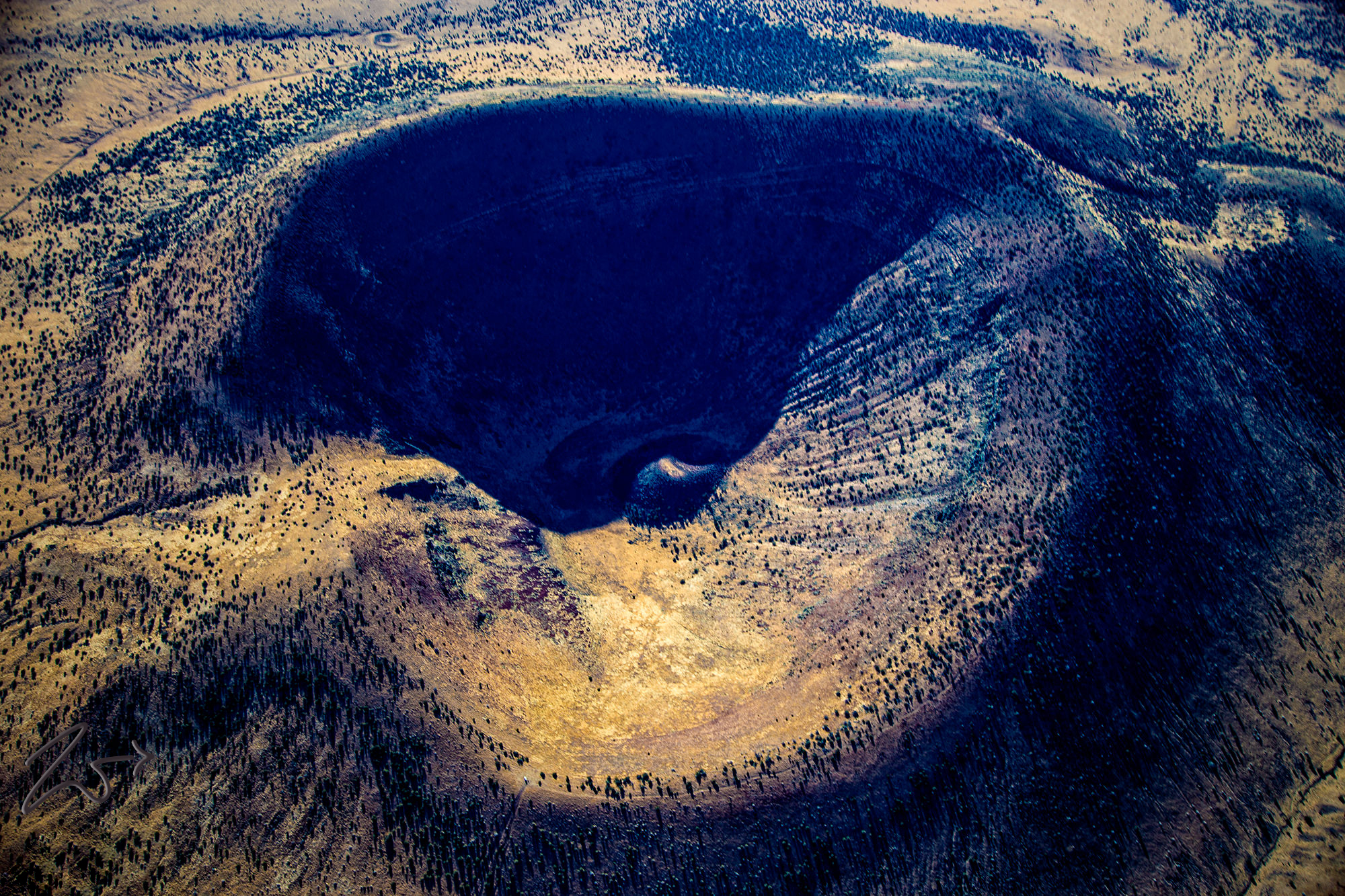 Colton Crater had been swept clean and the two parasitic cones along with the volcanic lava flow and surrounding area were buried under a thick blanket of debris including ash, dust, and rock. In the last violent gasp from the decapitated magma chamber, a new cinder cone began to build in the bottom of the glutted volcano but within a week or two, it lost pressure and froze where it stands today.

You can clearly see this in the center of the crater in the image above. The volcano that became Colton Crater was now finished.  Colton Crater is 4,100 feet across and 1,100 feet deep from the rim’s highest point. The bottom of the crater bowl is 250 feet below the elevation of the surrounding desert floor.