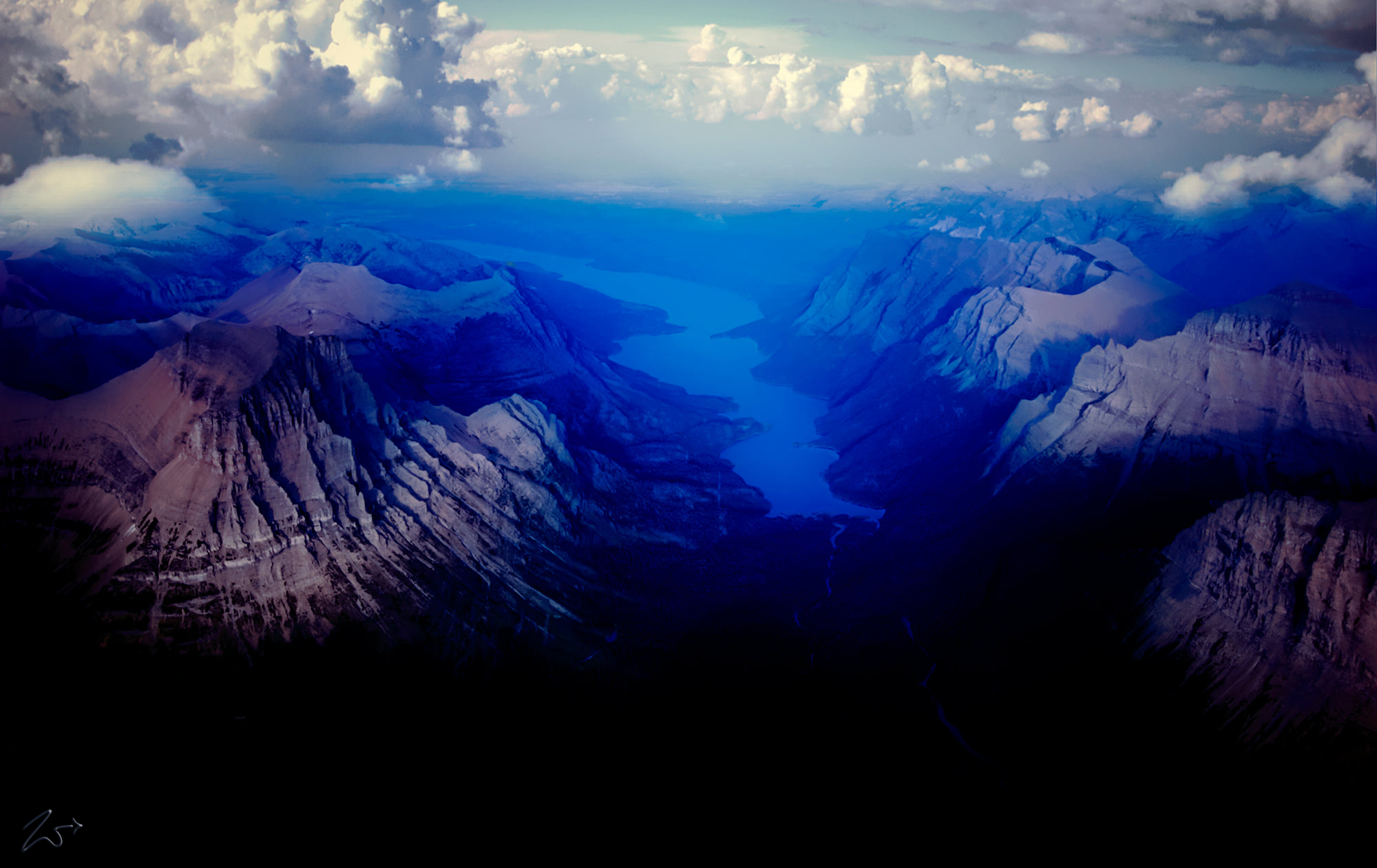 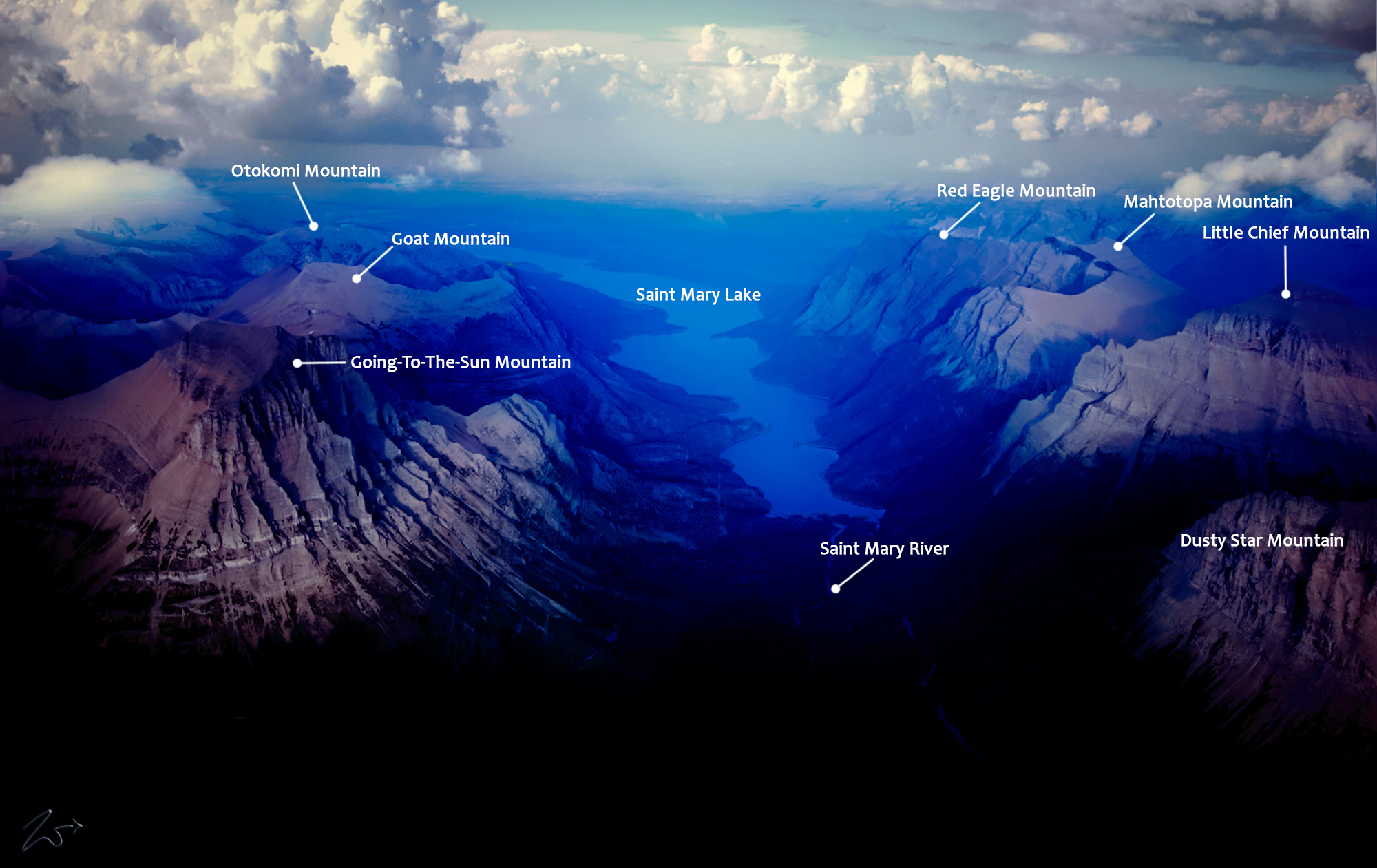 This is a late afternoon summer image of Glacier National Park and St. Mary Lake. In the middle of the image is Saint Mary Lake and at the bottom of the lake you can barely make out Saint Mary River where it joins Virginia Creek to flow into the lake. Following the lake, vertically up the image, you can clearly see The Narrows where Silver Dollar Beach is opposite of the Golden Stairs.
Zedekiah: “I lensed this as the sun was low on the horizon in the west behind me as I flew southbound high above the Rocky Mountain Range. Directly below me lays Heavy Runner Mountain and Citadel Mountain which are both casting long shadows in the lower foreground.”
On the left side of the image are the rugged jagged cliffs of Going-To-The-Sun Mountain in the foreground and Goat Mountain behind it. On the right side of the image in the immediate foreground are the raw cliffs of Little Chief Mountain and up the image, a bit behind the shadows lay Mahtotopa Mountain and Red Eagle Mountain. 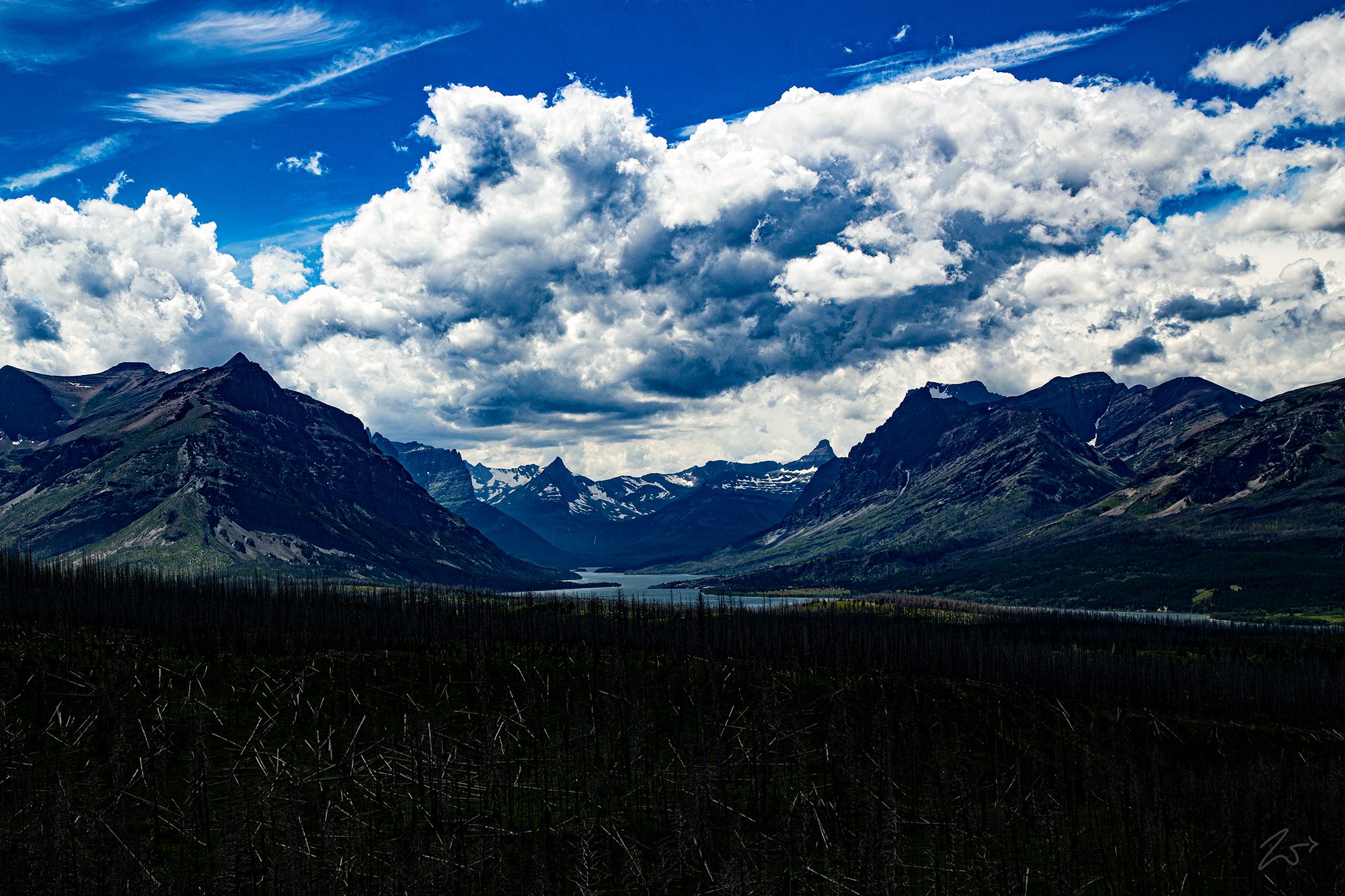 This is the ancient traditional homelands of the First Nations Blackfeet Tribes, their huge Nations Reservation (Blackfeet Indian Reservation) lies on the other side of Saint Mary Lake in this image as far as you can see.
The image below is a panoramic view from atop Saint Mary Ridge, looking west across Saint Mary Lake and up to Going-to-the-Sun Mountain. To review the full-size panoramic photo please go here and use the scrollbars to navigate around the image. To view the location key for this image please select the arrow icon on the left side of the image.

Archeological evidence of First Nations occupation dates back more than 10,000 years inside the boundaries of Glacier National Park. Numerous First Nations Tribes lived in the area around and within what is now the park. They hunted, fished, held sacred ceremonies, and gathered plants for food and medicine. When the first European explorers arrived in the region, the Blackfeet controlled the prairies on the east side of Glacier, while the Salish, Pend d’Oreille, and Kootenai occupied the more forested lands on the west side of the range.
Explorations to the area by trappers as early as the 1700s opened the area, and the future Glacier National Park, to trading among European settlers and local longtime tribal communities.
Today, the Blackfeet Indian Reservation covers 1.5-million acres and shares Glacier Mountain National Park’s eastern border. It is home to around 8,600 members of the Blackfeet Nation, the largest ancestral tribe in Montana. Further south the First Nations Flathead Reservation covers almost 1.3 million acres primarily along the meandering Flathead River and has approximately 7,000 tribal members of the Confederated Salish and Kootenai Tribes of the Flathead Nation. 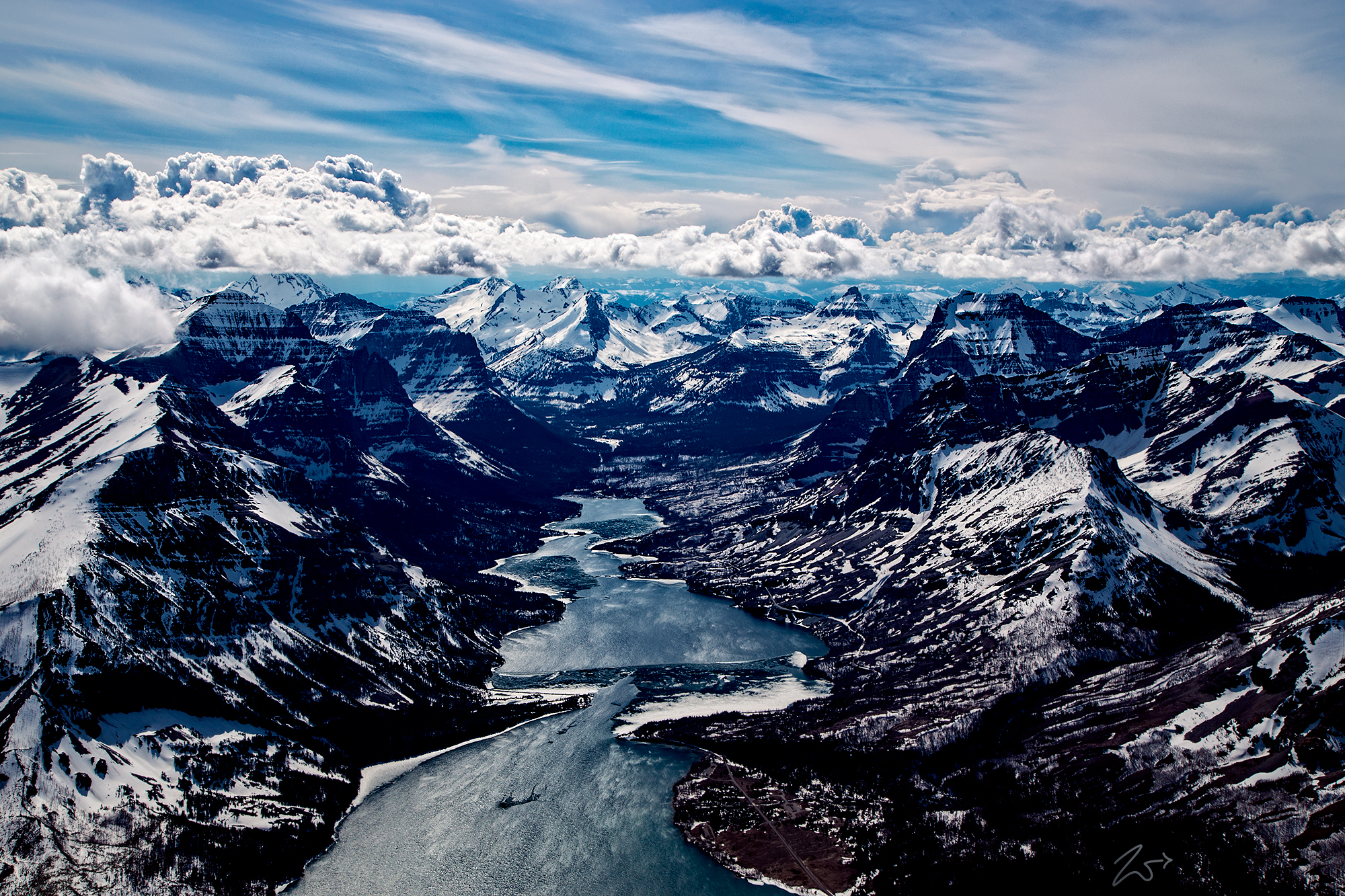 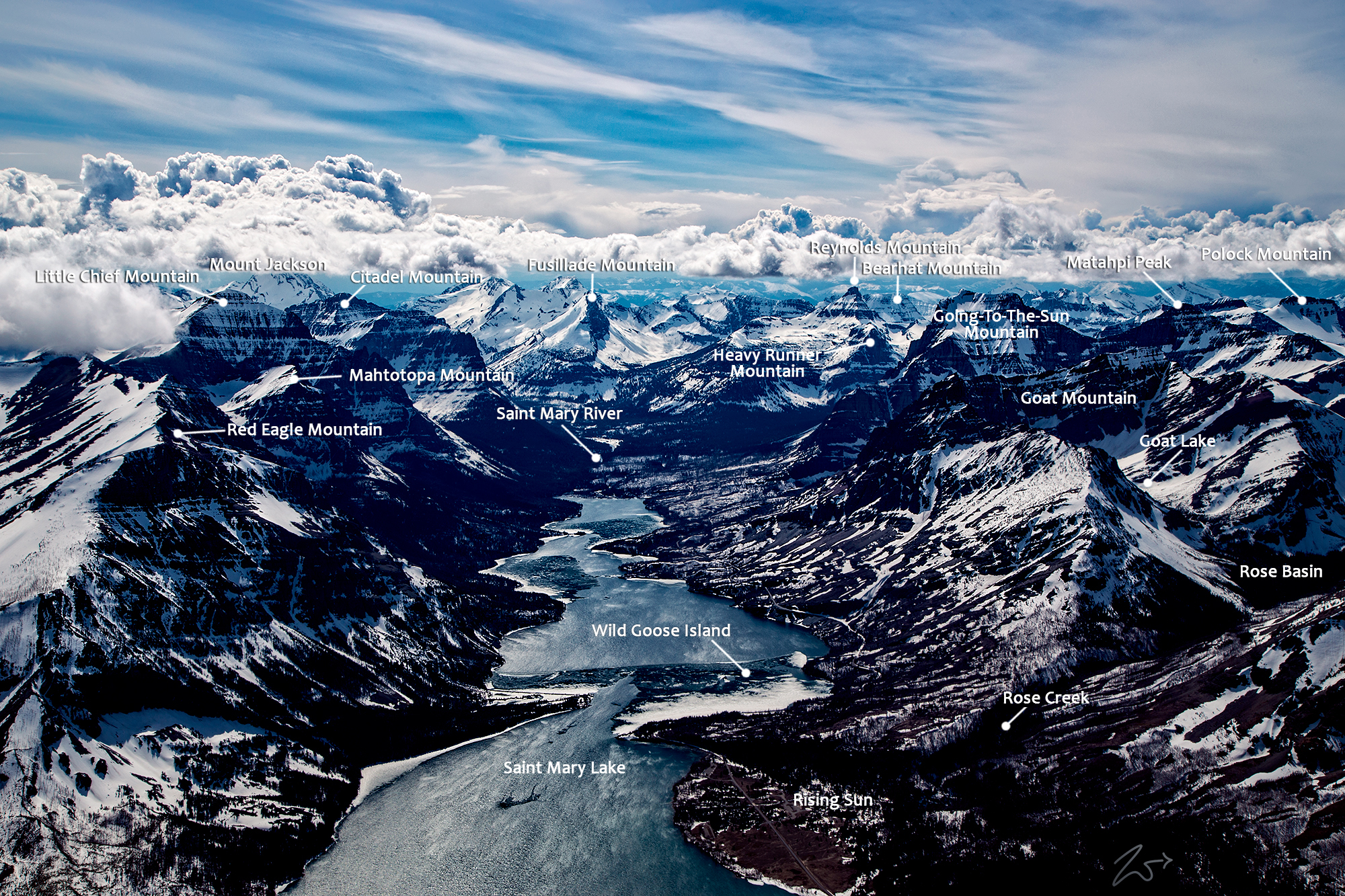 In the image above, winter is thawing across in Glacier National Park and on Saint Mary Lake the blustering winds kick up cold spray across the surface, pushing over the still-frozen ice in the Narrows. Red Eagles Mountain in the front then Mahtotopo Mountain followed by Little Chief Mountain are a formidable southern flank above the west end, southern shore (left side) of the lake.

At the far end of the lake, the narrow ridge and peak of Fusilade Mountain and the massive Gunsight Mountain join the Continental Divide as it stretches along the ridge to the right to join Reynolds Mountain and then the towering horn of Mount Cannon, overlooking Logans Pass, the passageway through the Rocky Mountains to the western side of Glacier National Park. On the right side (north) of Saint Mary Lake is Going to the Sun Mountain followed by Goat Mountain the Otokomi Mountain and finally the long ridge of Singleshot Mountain.

High up the slopes of Gunsight Mountain (in the image below), the headwaters of the Saint Mary River begin as a small stream and flow down into Gunsight Lake, then continue downstream into Saint Mary Lake, all the way through the eastern side of Glacier National Park. From here it flows into Lower St. Mary Lake inside the First Nations Blackfeet Indian Reservation. Continuing through the reservation, the Saint Mary River flows north into Alberta, Canada, and further till it merges with the Oldman River which eventually reaches the Saskatchewan River. 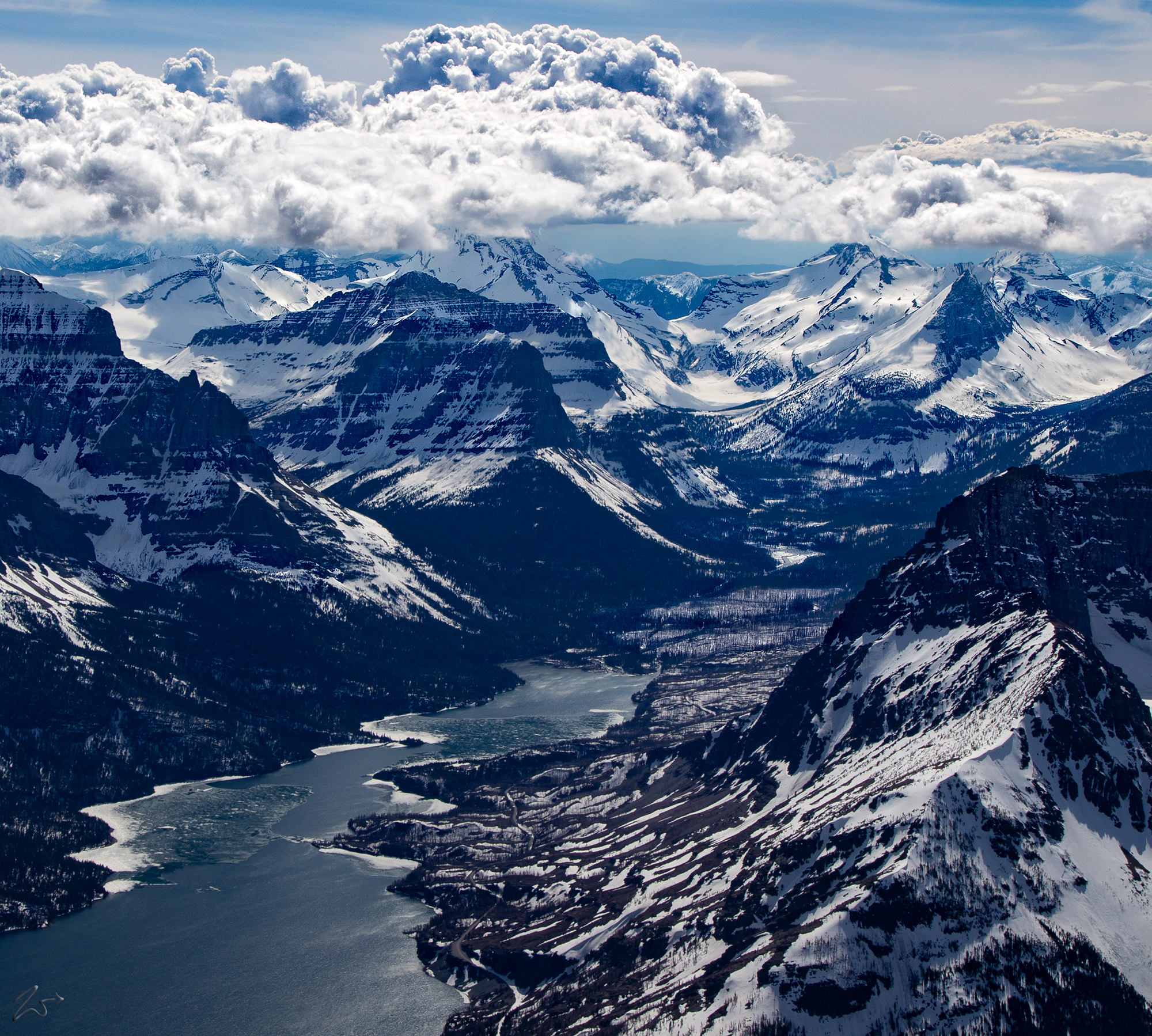 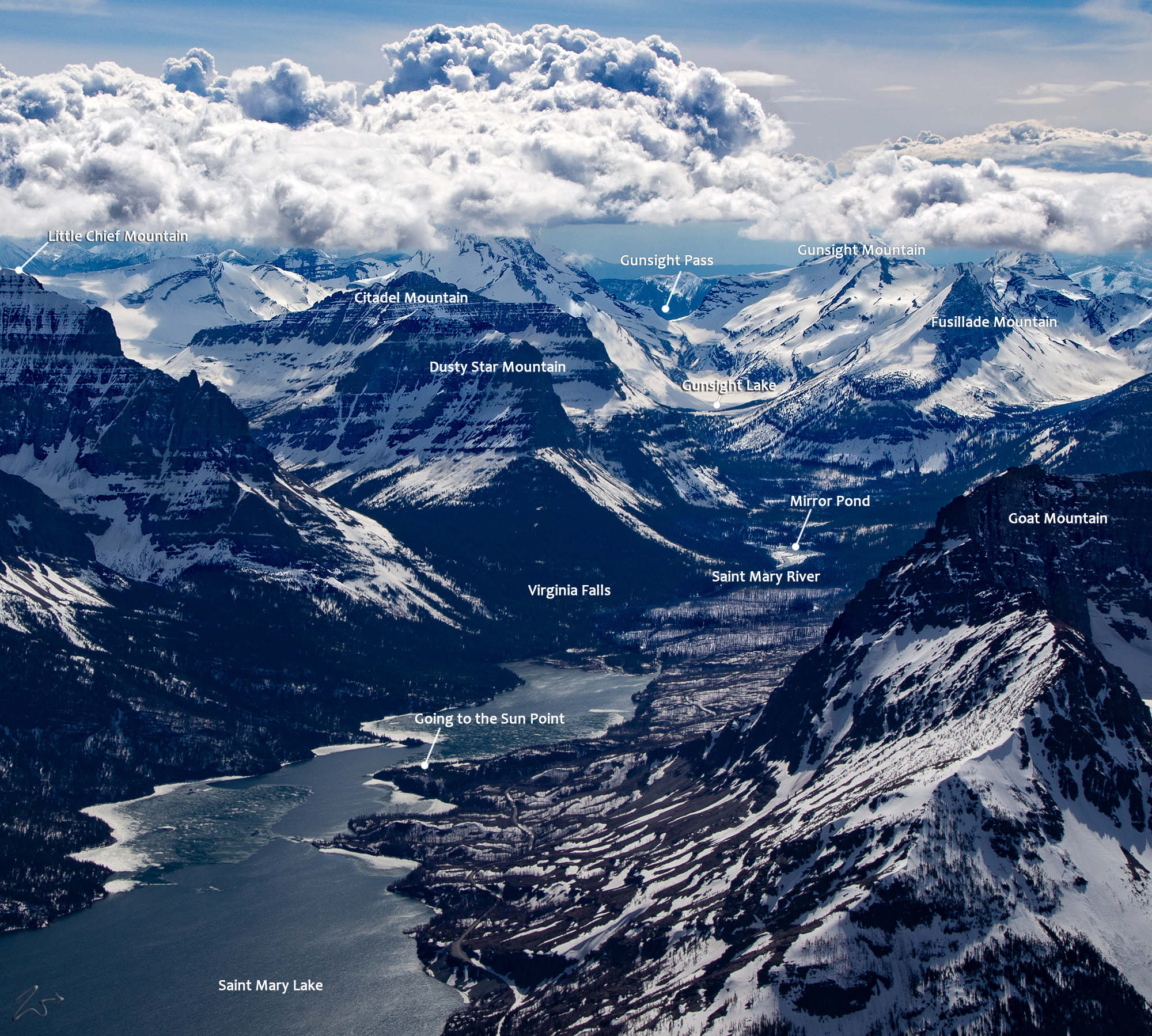 Above: Looking west Saint Mary Lake is still partially frozen under winters grip. On the left of the lake, Little Chief Mountain rises next to the Citadel Mountain then you can see Gunsight Lake nestled between Fusillade Mountain and Mount Jackson reaching up into the clouds. To the right is the rugged ridgeline of Singleshot Mountain and at its base along the lakeshore is Rising Sun campground.