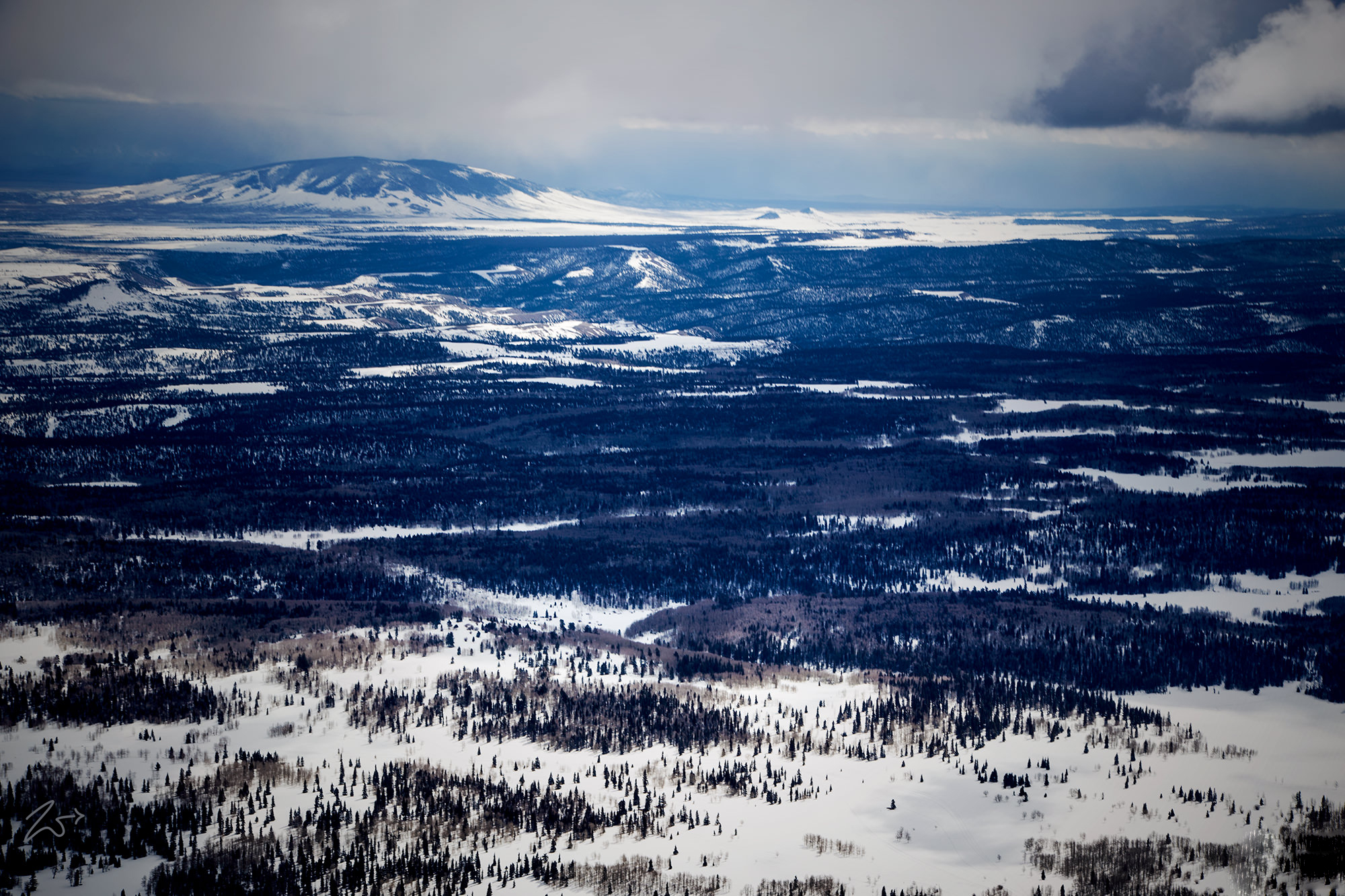 This is the Pinabetal Mesa in the Carson National Forest, and that large mound on the left of the horizon is San Antonio Mountain, a free-standing volcanic peak located south of Alamosa Colorado across the border in Rio Arriba County, New Mexico. With an elevation of 10,908 feet, San Antonio Mountain is the highest peak and one of several volcanic peaks within the Taos Plateau Volcanic Field, the largest volcanic field within the Rio Grande Rift Valley.

Because it stands alone in the valley, San Antonio Mountain provides a distinctive feature that can be seen from as far away as 60 or more miles in southern Colorado and northern New Mexico.

Zedekiah: “This image was captured as I flew above Colorado while shooting across the border into New Mexico, the border is above 1 third of the way from the bottom of this photograph. It was captured as I was chasing a snowstorm across from Four Corners through to Taos, New Mexico where it closed in and forced me to stay for the evening until the weather cleared enough to continue the journey.”

San Antonio Mountain is called “Bear Mountain” by the First Nations Tribal Tewa people in the Rio Grande Valley and is known as the “Mountain of the North” in Tribal cosmology. This area was the traditional ancestral homeland of the Northern Tiwa Tribe and bordered the Navajo to the west and Jicarilla Apache to the East.

With a base diameter of 5 miles, San Antonio Mountain is an important winter habitat for migrating herds of elk, and hosts one of the largest populations of elk in New Mexico, estimated at 7,000 strong. Its surroundings provide habitat for other wildlife such as Pronghorn, Golden Eagles, Hawks, Bears, Mountain Lions, Mule Deer, and White-tailed Jackrabbits among other smaller mammals. In the fall, the Stuart Meadows wetlands on the nearby Rio San Antonio provide a stopover for migrating Sandhill Cranes, Mallards, American Widgeon, Northern Pintail, Common Yellowthroat, and the tiny Sora.