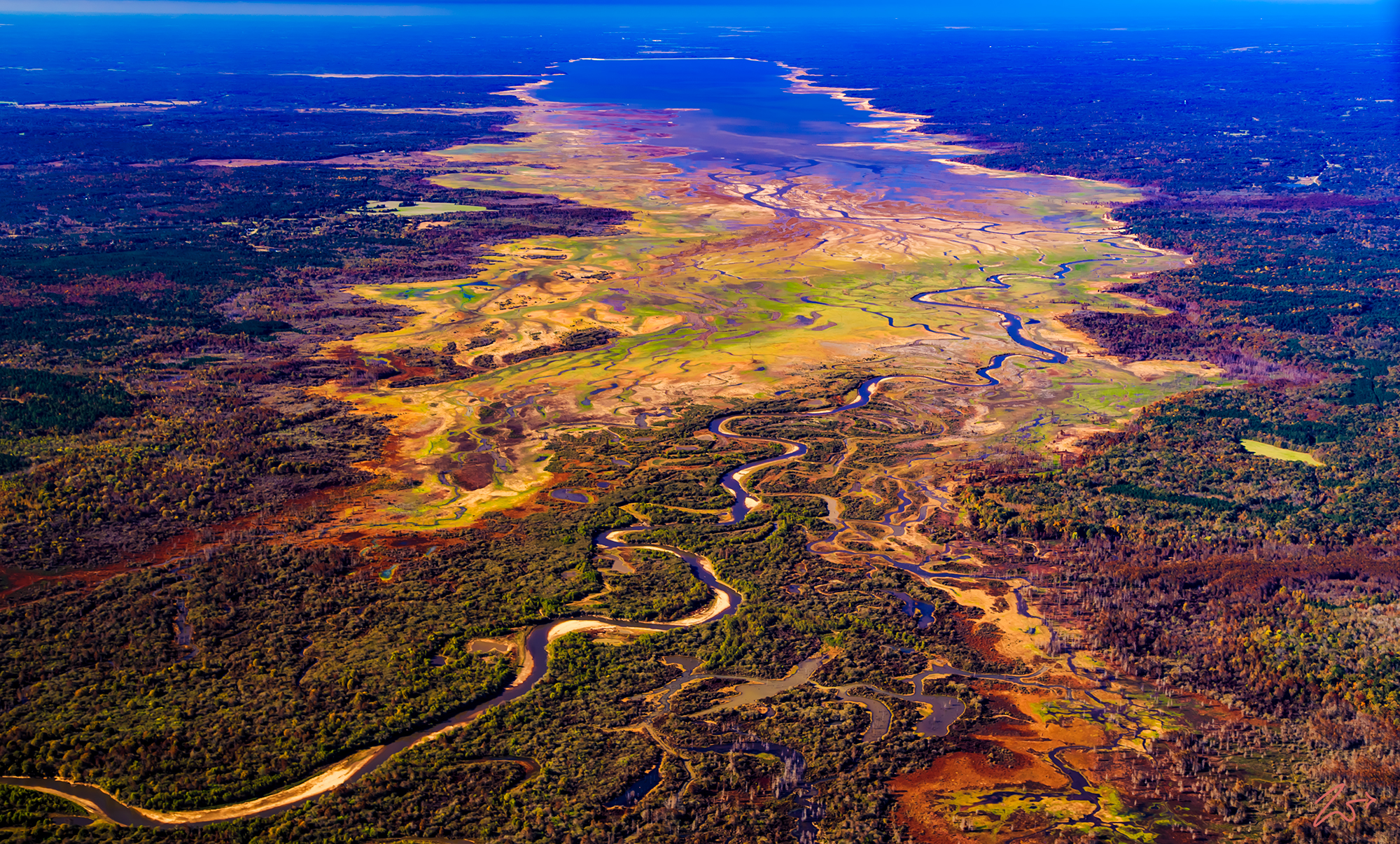 Sardis Lake is a 98,520-acre (398.7 km2) reservoir on the Little Tallahatchie River in Lafayette, Panola, and Marshall counties, Mississippi. I took these images over the lake early in the morning when the sun was at an angle that brightly, intensely lit up the amazing earth colors.  The Tallahatchie River runs 230 miles (370 km) from Tippah County, down through Tallahatchie County, and on to Leflore County, where it flows into the Yalobusha River to form the Yazoo River. The river is only navigable for 100 miles (160km).Zedekiah: “This is an early morning photograph I captured of the Little Tallahatchie River as it flows through Lake Sardis in Mississippi. I love the surrounding ambrosial marshlands, it amazes me the amount of life in this picture! The colors in nature are stunning. I find beautiful places that can only be seen from up above the ground. This is such a place. One morning as I was flying westbound at a couple of thousand feet above ground just after sunrise on a clear winter morning I came upon this view. The colors were stunning.”

As part of the Flood Control Act of 1936, the federal government constructed an earth-filled flood control dam on the Tallahatchie near the town of Sardis, Mississippi. This created Sardis Lake to protect the town and surrounding area from flooding. Tallahatchie is a First Nations Choctaw name meaning “Rock of Waters.” This name derives from the source of the Tallahatchie River which has outcrops of iron sandstone.

The following image is a close-up of the Little Tallahatchie River which flows into and from Sardis Lake. This image was lensed on the eastern side of the lake from an altitude of about 2,000 ft (609 m) and clearly shows the numerous rivulets and ambrosial marshes that propagate along the river as it shifts its course over time, building up sand and then altering a course around those sands to create new river paths. And in the course of this constant shifting, creating wetland marshes and swamps along the way. 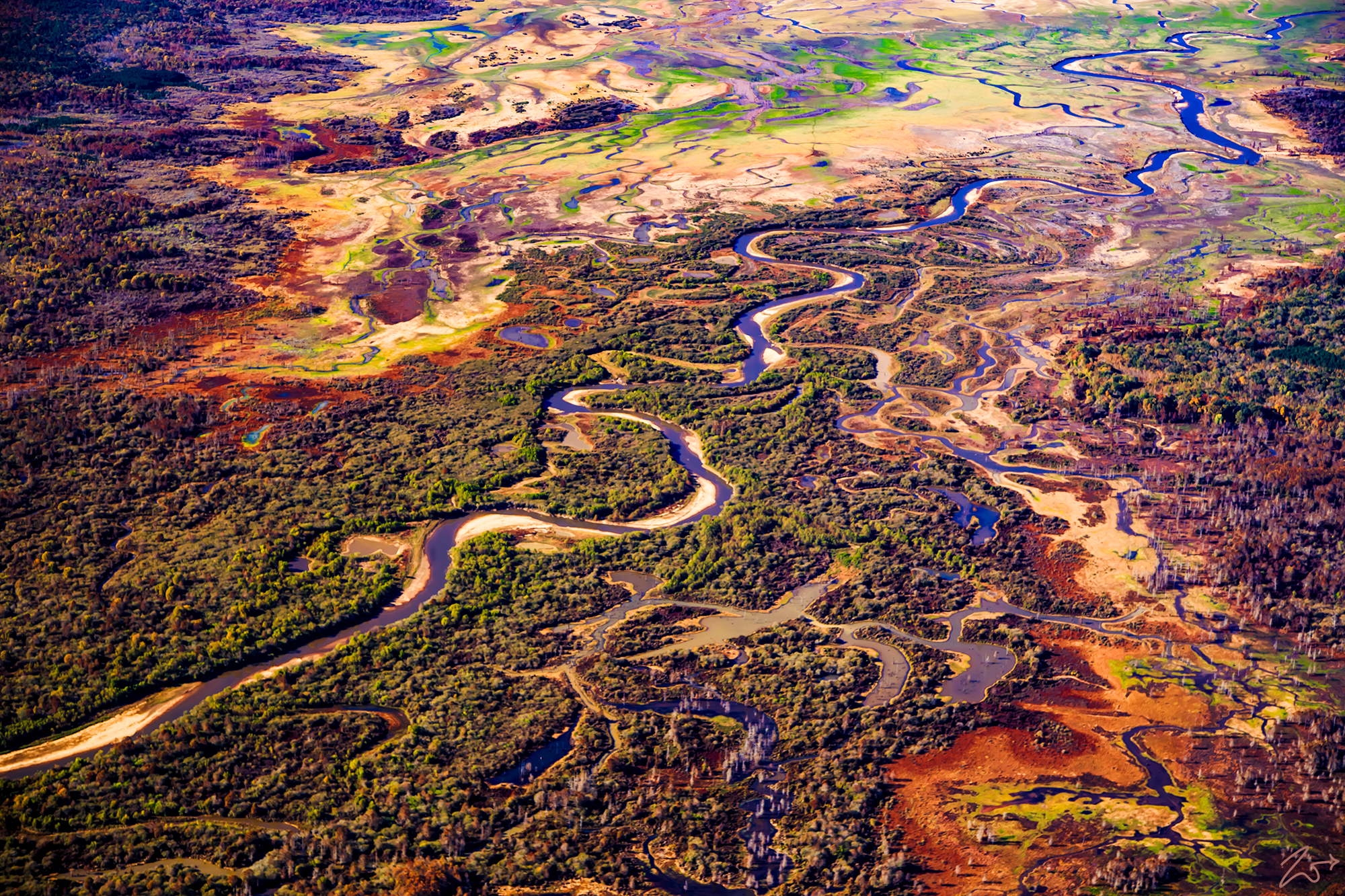 This area is all part of the Yazoo River Headwaters, an area formed by the confluence of the Tallahatchie and the Yalobusha rivers, and all part of the vast geographic region known as the Mississippi Delta. One thing for sure, when flying above this area, Sardis Lake stood out very clearly with its vibrant multi-colored hues, especially against the large green and lush delta landscape under such a deep blue sky! 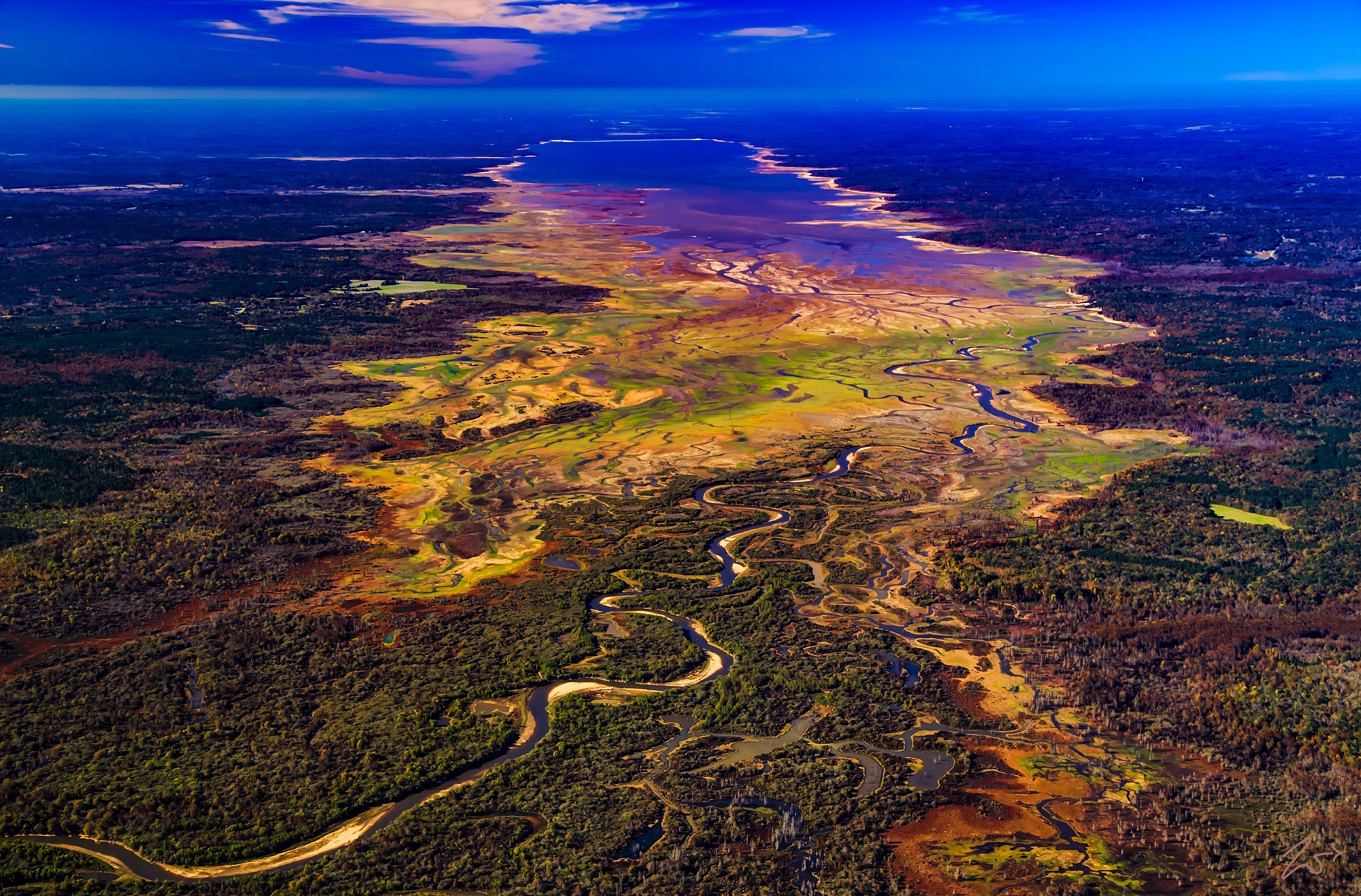 The Mississippi Delta is the distinctive northwest section of the U.S. state of Mississippi (and small portions of Arkansas and Louisiana) which lies between the Mississippi and Yazoo Rivers. The region has been called “The Most Southern Place on Earth” (“Southern” in the sense of “characteristic of its region, the American South”), because of its unique racial, cultural, and economic history. It is 200 miles long and 87 miles across at its widest point, encompassing circa 4,415,000 acres, or, some 7,000 square miles of alluvial floodplain. The different vibrant colors are due to a combination of me flying above this area and shooting it early in the morning, during the fall, which gives it some of its color. And the different colors of the various types of pond scrum such as floating macroscopic plants, floating cyanobacteria (blue-green algae), euglena and other flagellated algae, diatom blooms, filamentous green algae, and zooplankton scums.

Zedekiah on the image below “I captured this as I was turning in the bush plane, and I just think it is a cool view like this… one of these days I would love to take a canoe trip along the river! I bet the fishing is awesome! The Mississippi Delta is renowned for its dense and lush forests, swamps, and marshes. Many times when flying across these lands I really would hate to lose my engine and have to make an emergency landing in this swampy area. I have heard of airplanes going down here and never be found again!” 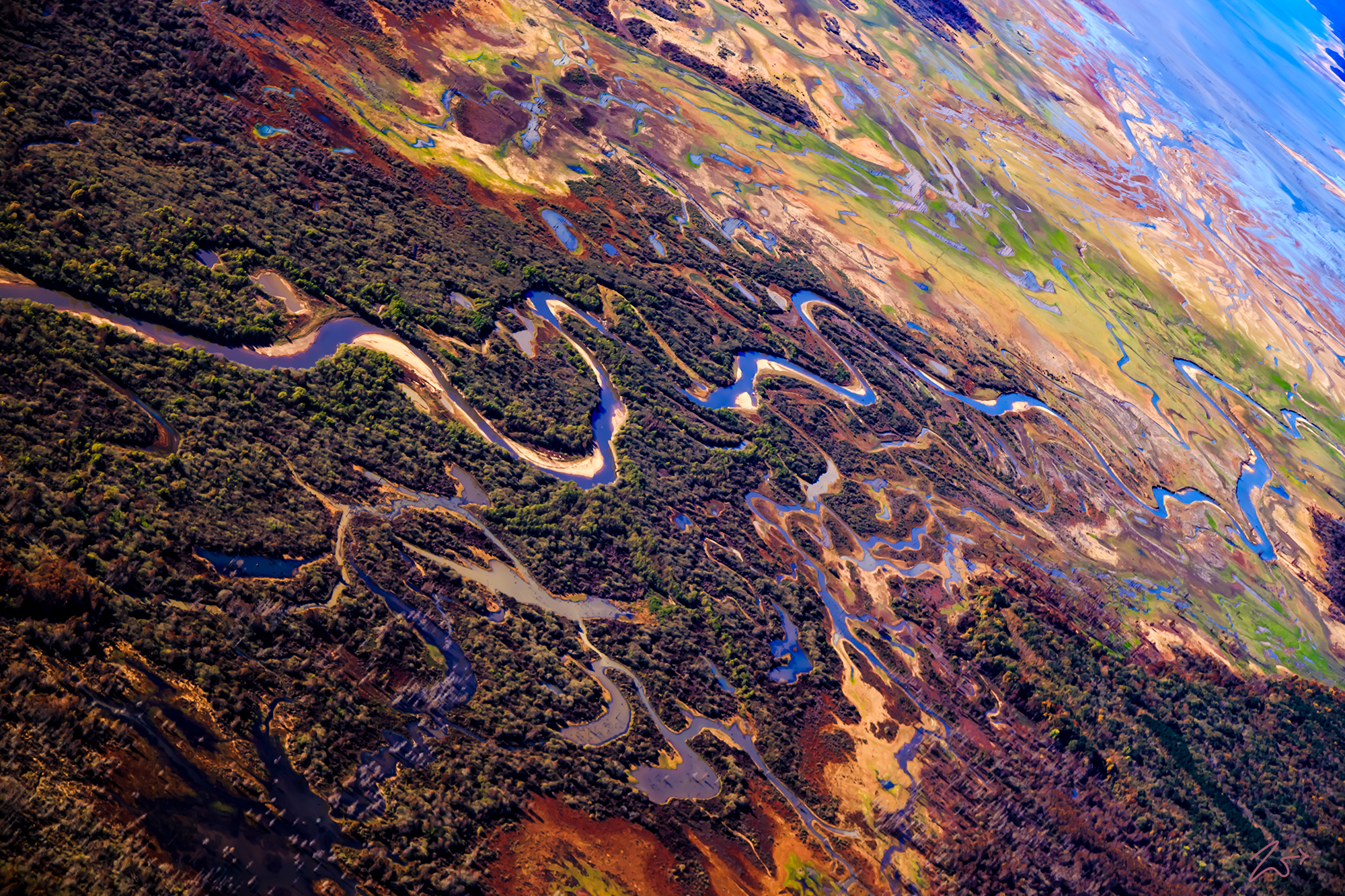 At the far end of the marsh area that lays next to the Little Tallahatchie River, I discovered this small marsh area where you can see where the land has been flooded out. The remains of large trees still dot the land along the many rivulets that cross the landscape. 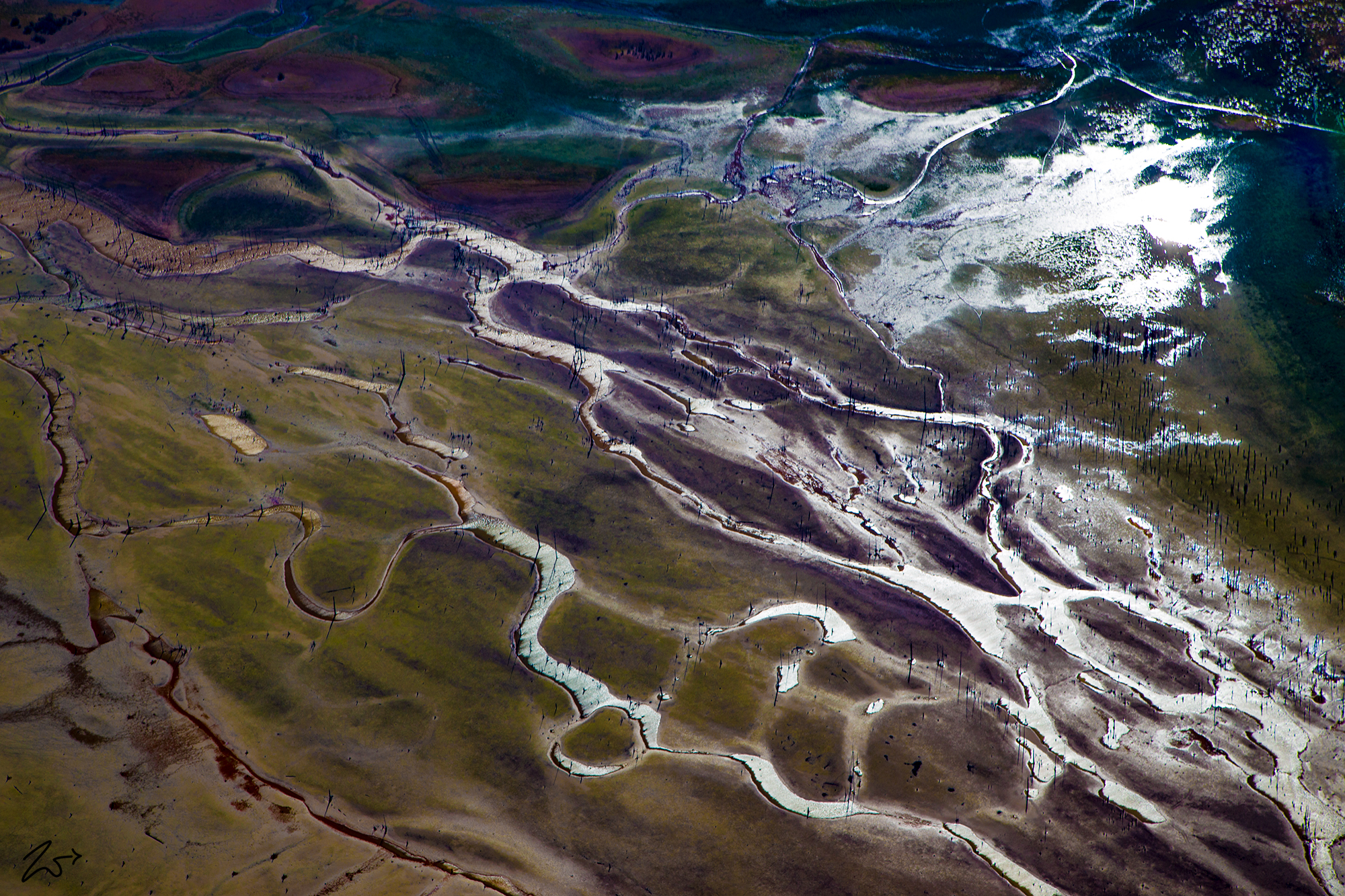 And this following image is an even closer view I lensed while flying only a few hundred feet above ground. The bright sunlight is reflecting off of the water surfaces and you can see by the ripples on top of the water that it was pretty windy that day. 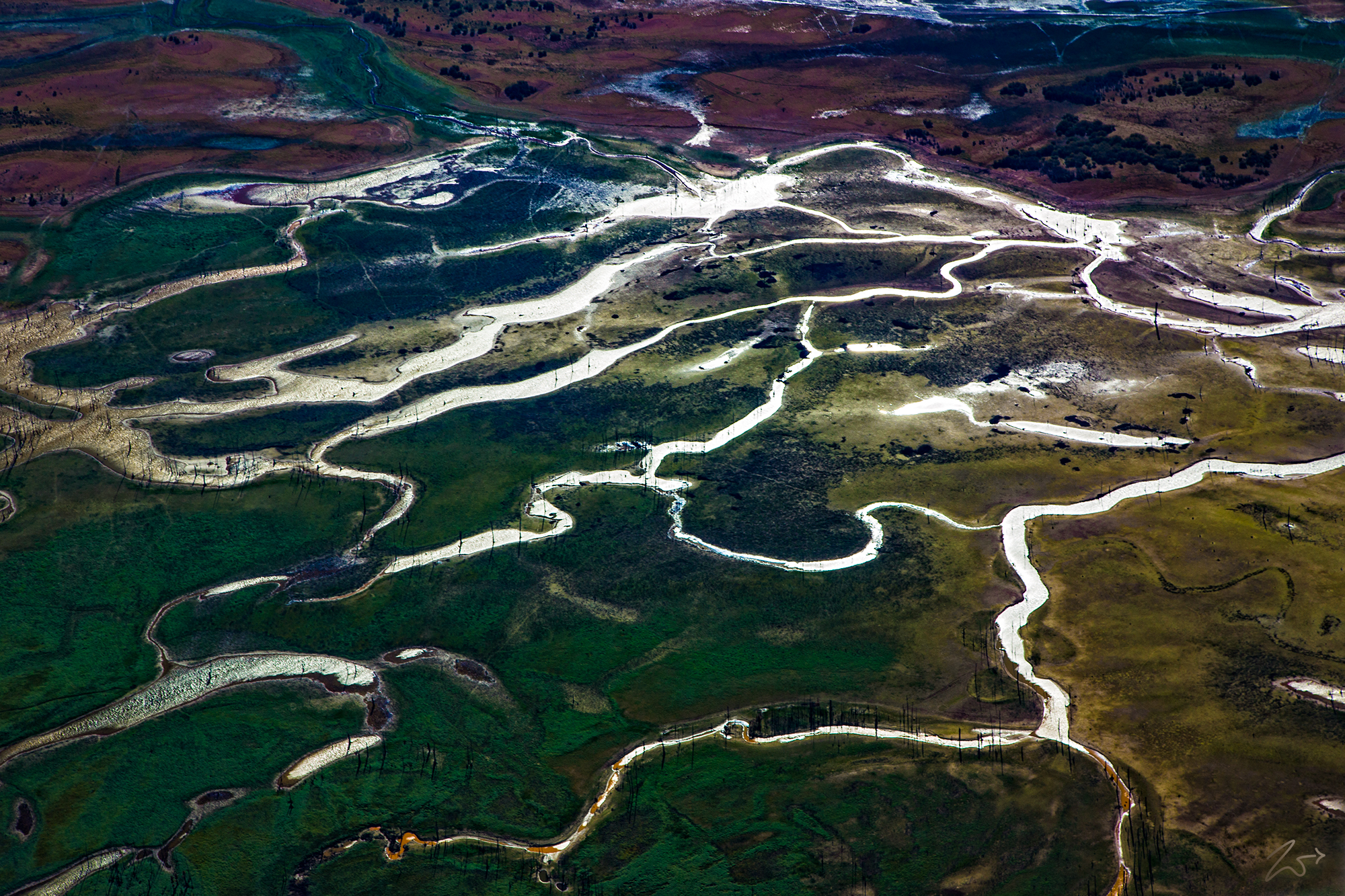