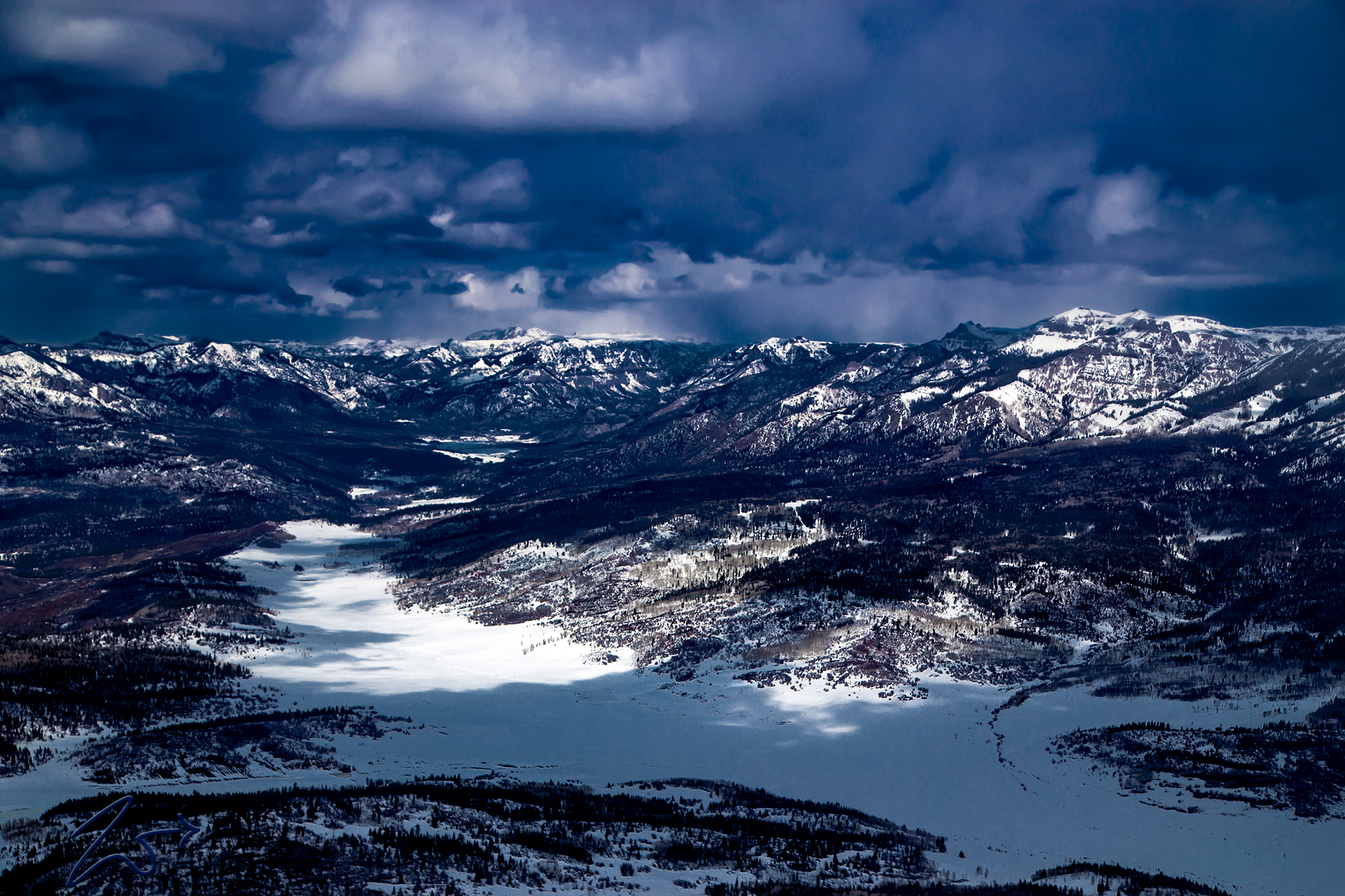 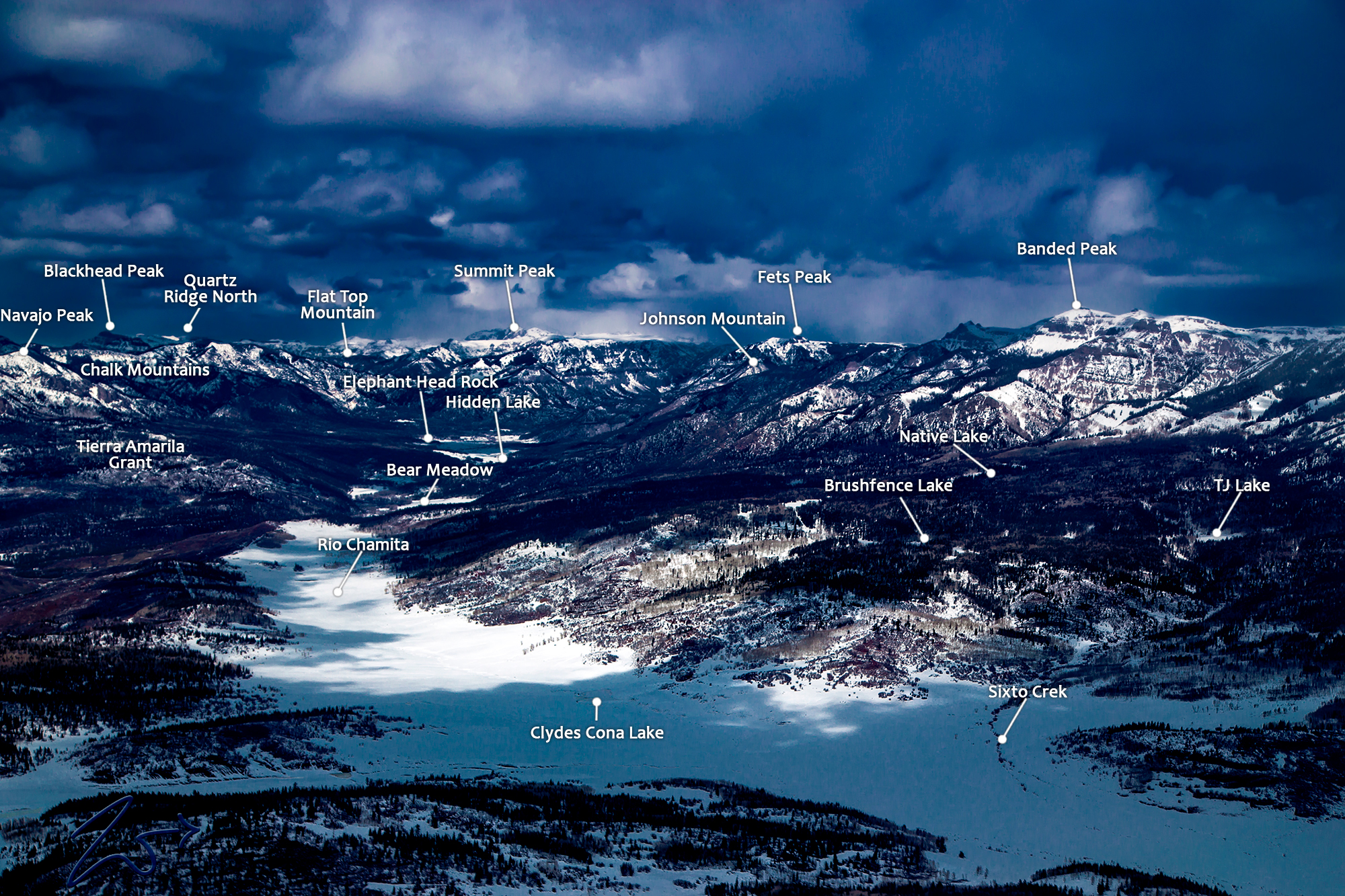 This is the snowed under Navajo River and the Rio Chamita along the Continental Divide on the border between New Mexico and Colorado in the Tierra Amarilla Grant area of the San Juan National Forest in the Colorado Rocky Mountains. The Navajo River was originally known by the First Nations Jicarilla Apache as ” Lóolahó”.  The headwaters of the river are in the distant valley to the middle left of this image. This river was both a lifeline and a transportation corridor to the ancient people who occupied this area.

In the snowed-in valley, in the immediate foreground lays Clydes Cona Lake and the creek coming out of the mountains to the right side of the image is Sixto Creek, the road that passes through that valley to the right is called The Narrows. The valley goes to the left up into the mountains following the Navajo River through Weisel Canyon, Bear Meadow, Virginia Meadow past Headache Creek, Skeeter Park and the Big Muddy Creek into the East Meadow and on to Indian Creek and the Hidden Lake all the way up to Bridal Veil Falls.

On the left side of the image is Navajo Peak and then Flattop Mountain, these are both parts of the Chalk Mountains in the San Juan Wilderness of the San Juan Mountains. Continuing along the ridgeline we have Gunsight Pass, Elephant Head Rock down in the valley then back up to Conejos Peak, Fets Peak, Johnson Mountain, Charleys Peak, and Gramps Peak. This entire valley is part of the old Spanish Tierra Amarilla Land Grant.

These are all part of what is known as the South San Juan Range. This valley and surrounding mountains are home to some of the lushest tundras in Colorado with huge expanses above tree-line and incredible vistas of the Continental Divide from the various mountain tops. This South San Juan Wilderness is among the most rugged wilderness areas in the Colorado Rockies. On the west side of the range are headwaters of the San Juan River which flows down to through New Mexico and west into Utah. Water is readily abundant from just about anywhere within the range, and there is a myriad of waterfalls, large and small.

Zedekiah: “I lensed this image while flying westbound from Zapata Ranch in the San Luis Valley while trying to get to my destination before the snow began again. It was cold but the atmospheric conditions were perfect for long-range photography.”

Though rarely seen nowadays, Grizzly Bear may still roam in the remote wilderness here. Supposedly the last Grizzly Bear was killed in self-defense by the outfitter and guide Ed Wiseman way back in 1979. While guiding a hunter near the headwaters of the Navajo River, Wiseman was charged by a female grizzly but was able to stab the bear to death by hand with an arrow as the bear attacked and tore into him.