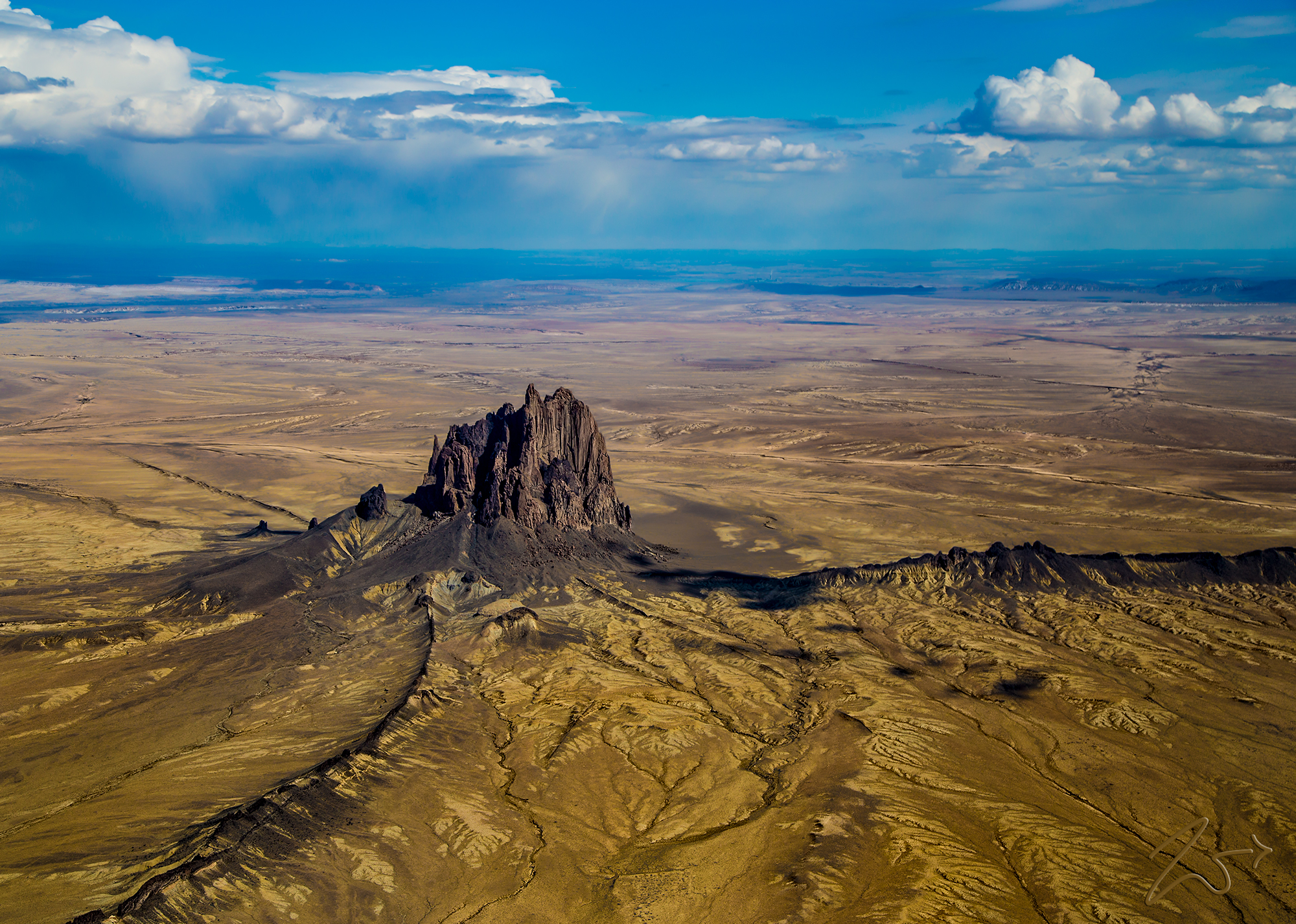 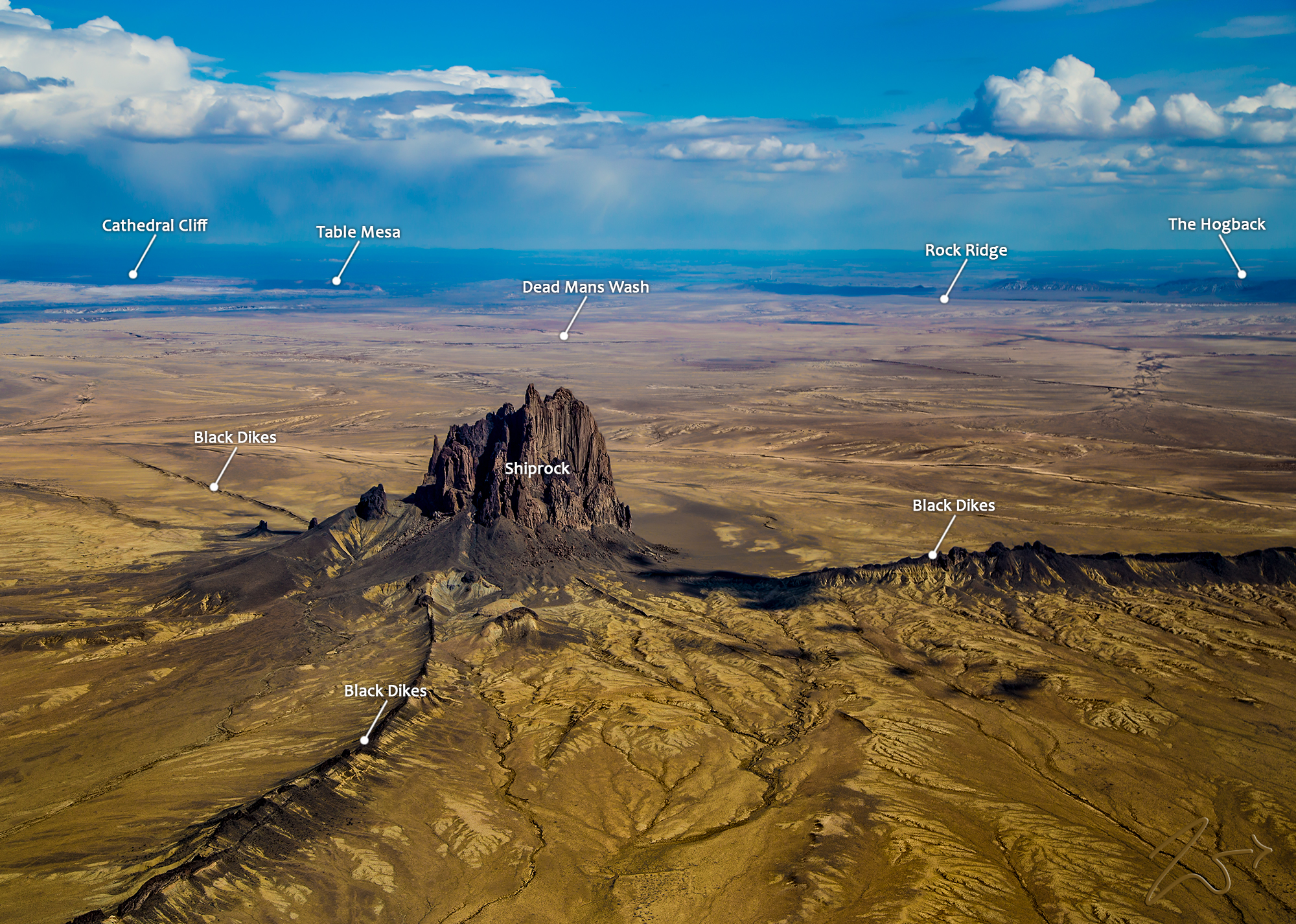 This is one of the most sacred of places to the First Nations Diné (Navajo). This solitary Monadnock plays a significant role in their tribal religion, myth, and traditions. They call this place “Tsé Bitʼaʼí,” meaning both “rock with wings” and “winged rock” and these are the remains of the great bird which long ago rescued the people from the dangerous northern lands where they were trapped and brought them to safety here in their present lands. Located in the Four Corners region of New Mexico, this area is the center of the large swath of lands once occupied by the Ancient Pueblo People, a prehistoric Native American culture of the Southwest United States often referred to as the Anasazi.

Below in the foreground is Rock Ridge and Dead Mans Wash on the left side of the image. The name “Shiprock” or Shiprock Peak or Ship Rock derives from the peak’s resemblance to an enormous 19th-century clipper ship. Early American Settlers first called the peak “The Needle”, a name given to the topmost pinnacle by Captain J. F. McComb in 1860. 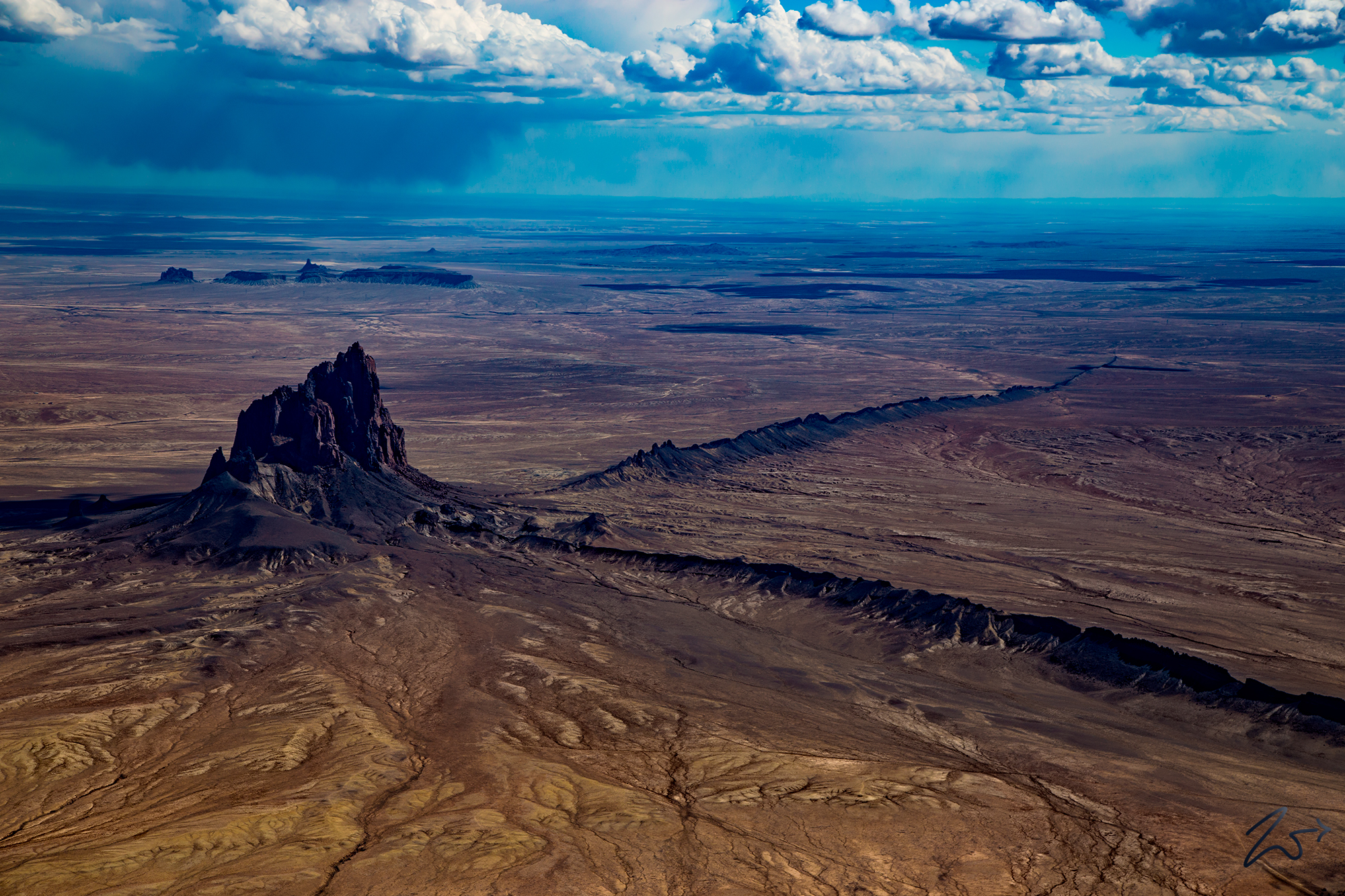 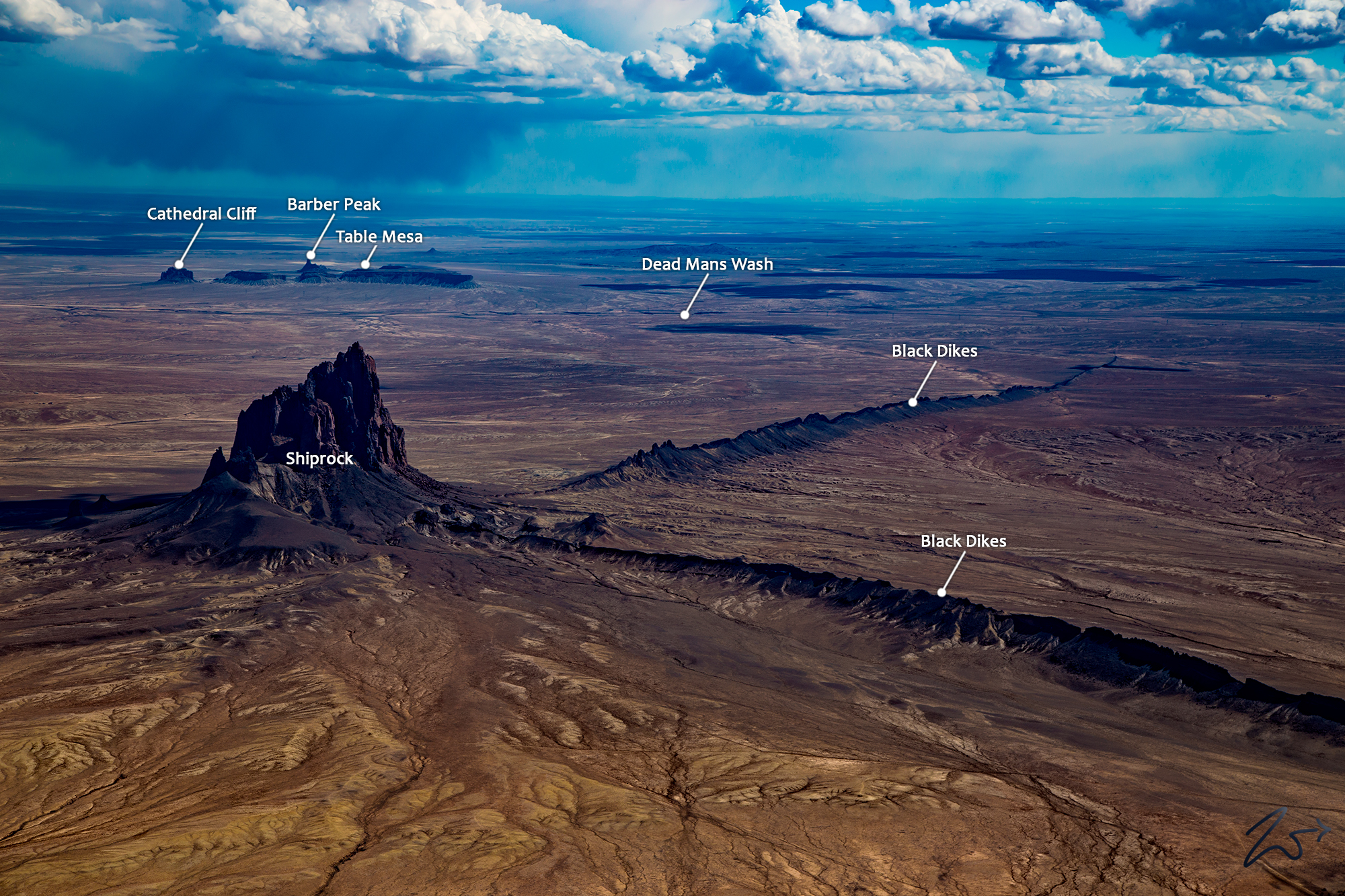 The structure is a Monadnock (an isolated rock hill) made from the exposed throat or core of an ancient volcanic eruption over 27 million years ago. This was once all at least 2,500–3,000 feet (750–1,000 meters) underground but over millions of years, the forces of erosion removed all the surrounding ground and left the volcanic core and those strange wall-like sheets of Minette, known as black dikes, which radiate away from the central formation. 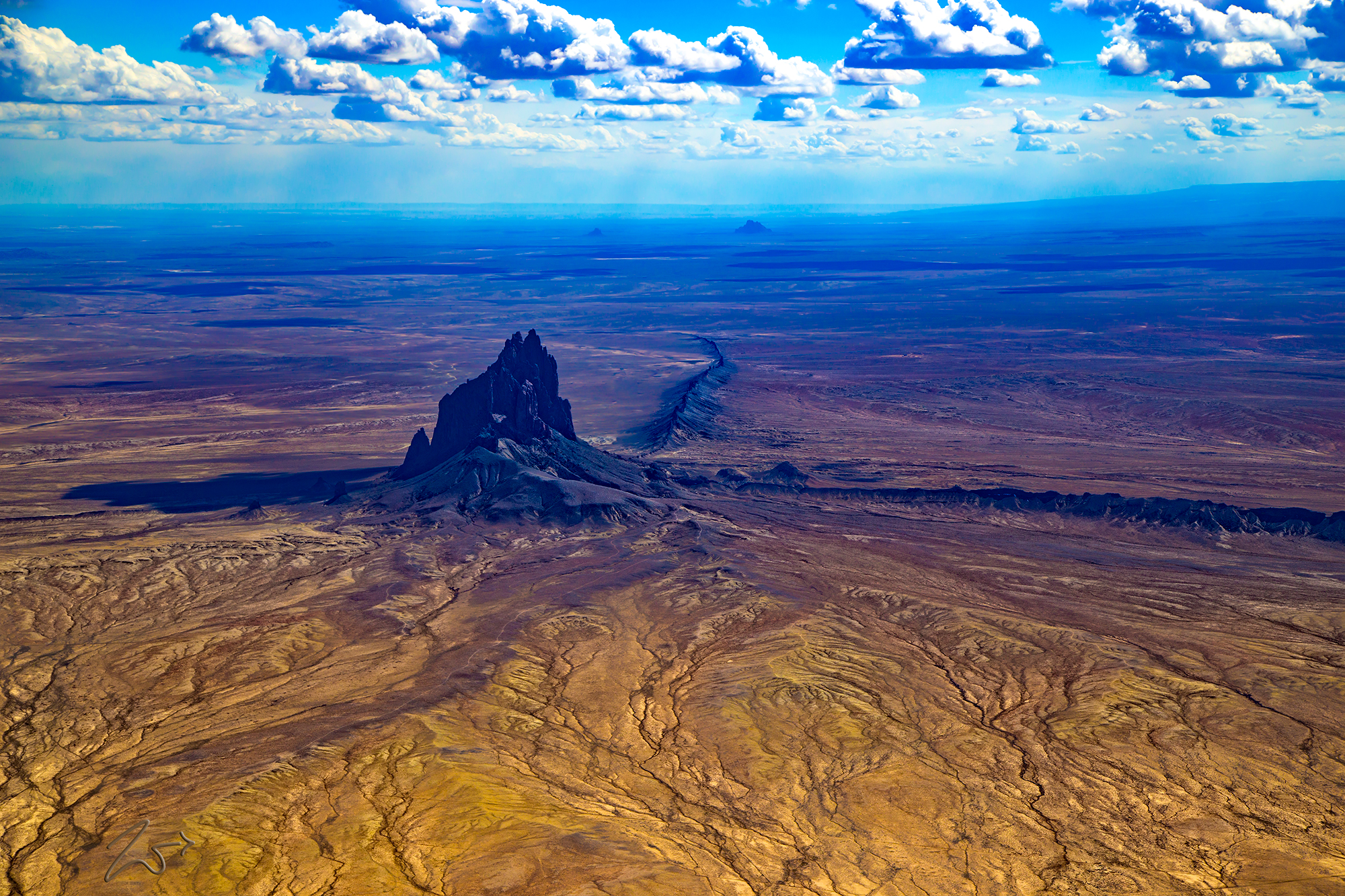 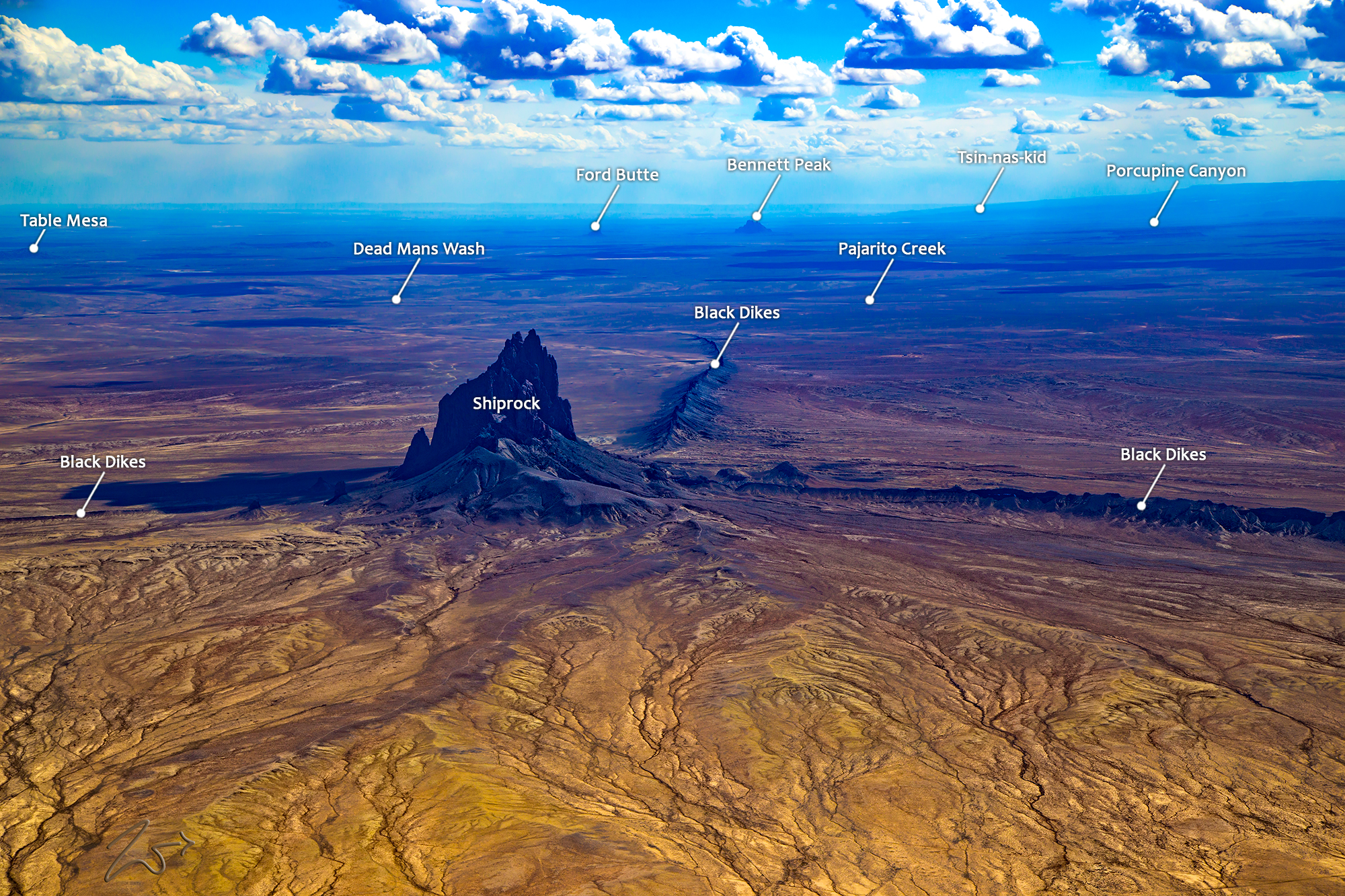 Behind Shiprock in the distance is Table Mesa and Cathedral Cliff and on the right side of the image, those 2 protuberances rising up off the desert floor are Mitten Rock (the larger one) and Rock Mesa (the smaller). 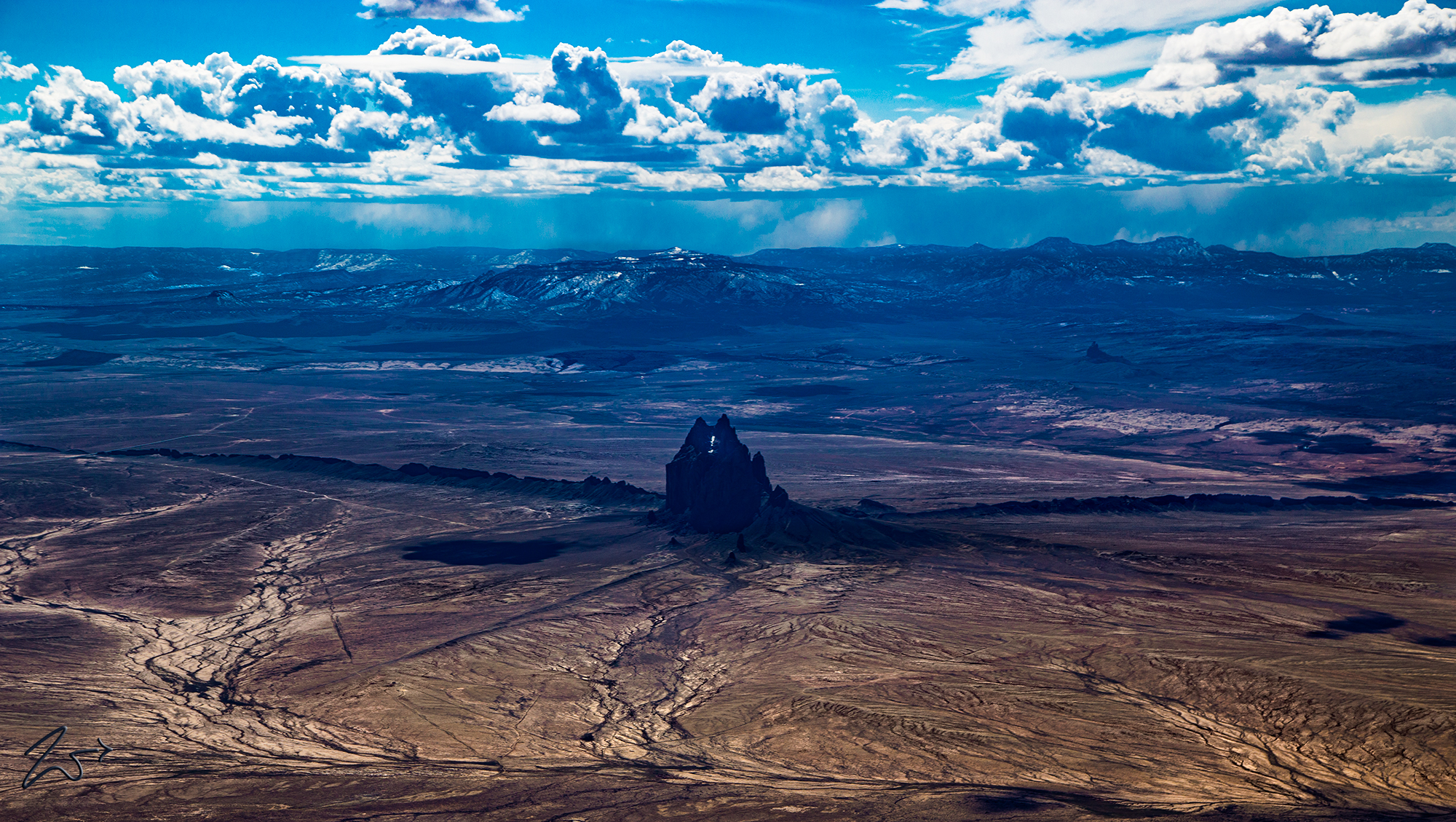 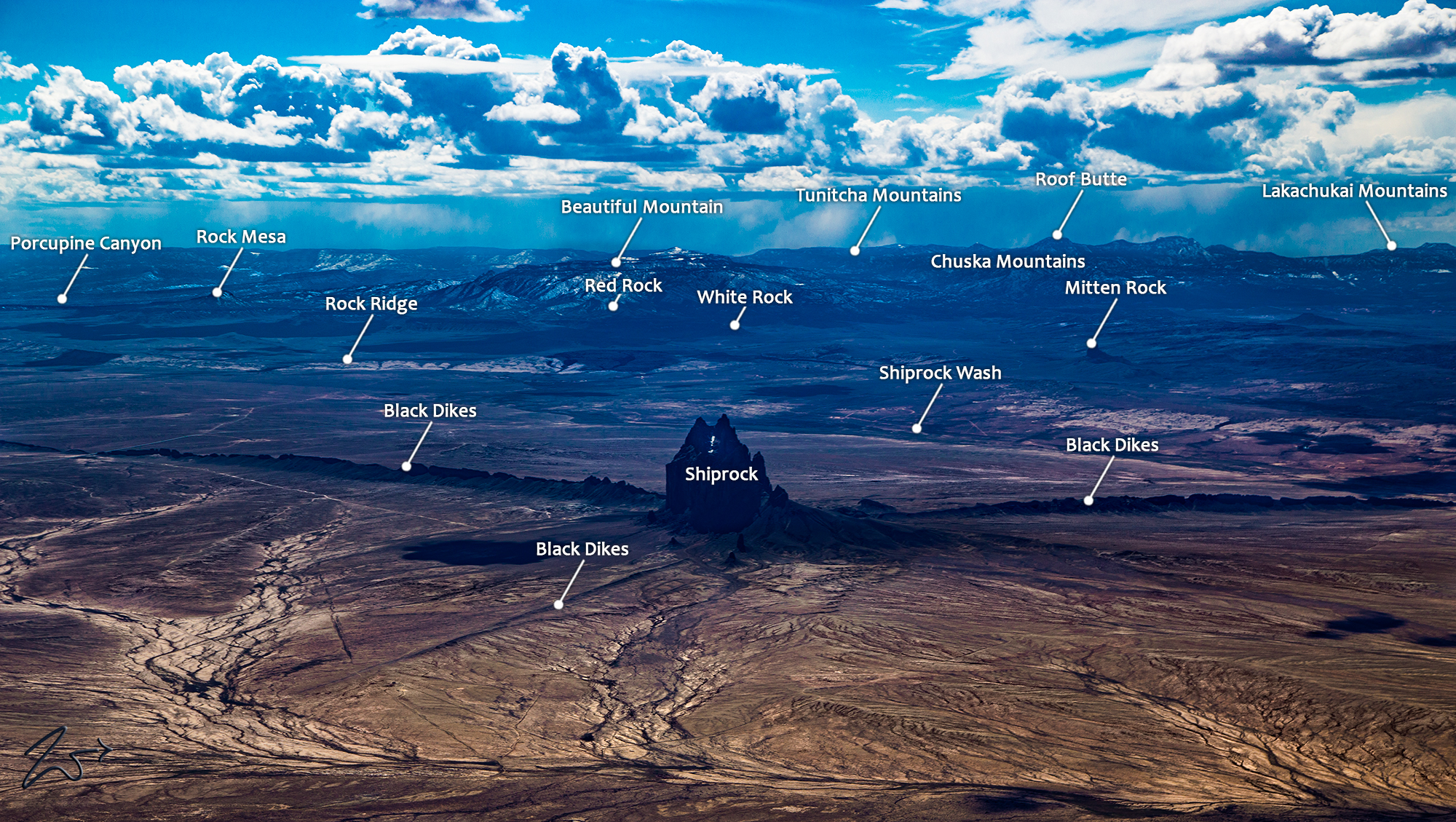 There are at least 3 other important traditional Diné legends about this towering iconic structure:

After the Diné were rescued and brought to these lands they lived on the remains of the great bird which rescued them and then turned into this giant stone monolith, and they only came down off the rock to plant their fields and get water. But one day, while the men were out hunting, the peak was struck by lightning, obliterating the trail and leaving only a sheer cliff, stranding the women and children on top who were left to starve. Today the presence of people on the peak is forbidden “for fear they might stir up the chį́įdii (ghosts), or rob their corpses.”

Shiprock is also said to be either a medicine pouch or a bow carried by the “Goods of Value Mountain“, a large-scale geographic mythic male figure who comprises several mountain features located throughout the surrounding region. The Chuska Mountains comprise the body, Chuska Peak is the head, the Carrizo Mountains are the legs, and Beautiful Mountain is the feet.

There is also the legend of the Bird Monsters (Tsé Ninájálééh) which nested on the pea. After Monster Slayer, elder of the Warrior Twins destroyed the Bird Monster called Déélééd at Red Mesa, he killed 2 more adult Bird Monsters here at Shiprock and changed the two young ones into the first eagle and owl.

The peak at the top of this structure itself is mentioned in stories from the Enemy Side Ceremony and the Navajo Mountain Chant, and is associated with the Bead Chant and the Naayee’ee Ceremony. There are a number of other legends regarding what the Shiprock pinnacle might be. Some Navajo traditionalists argue that it is an unnatural geological anomaly that it may have originated as a work of the ‘star people’.