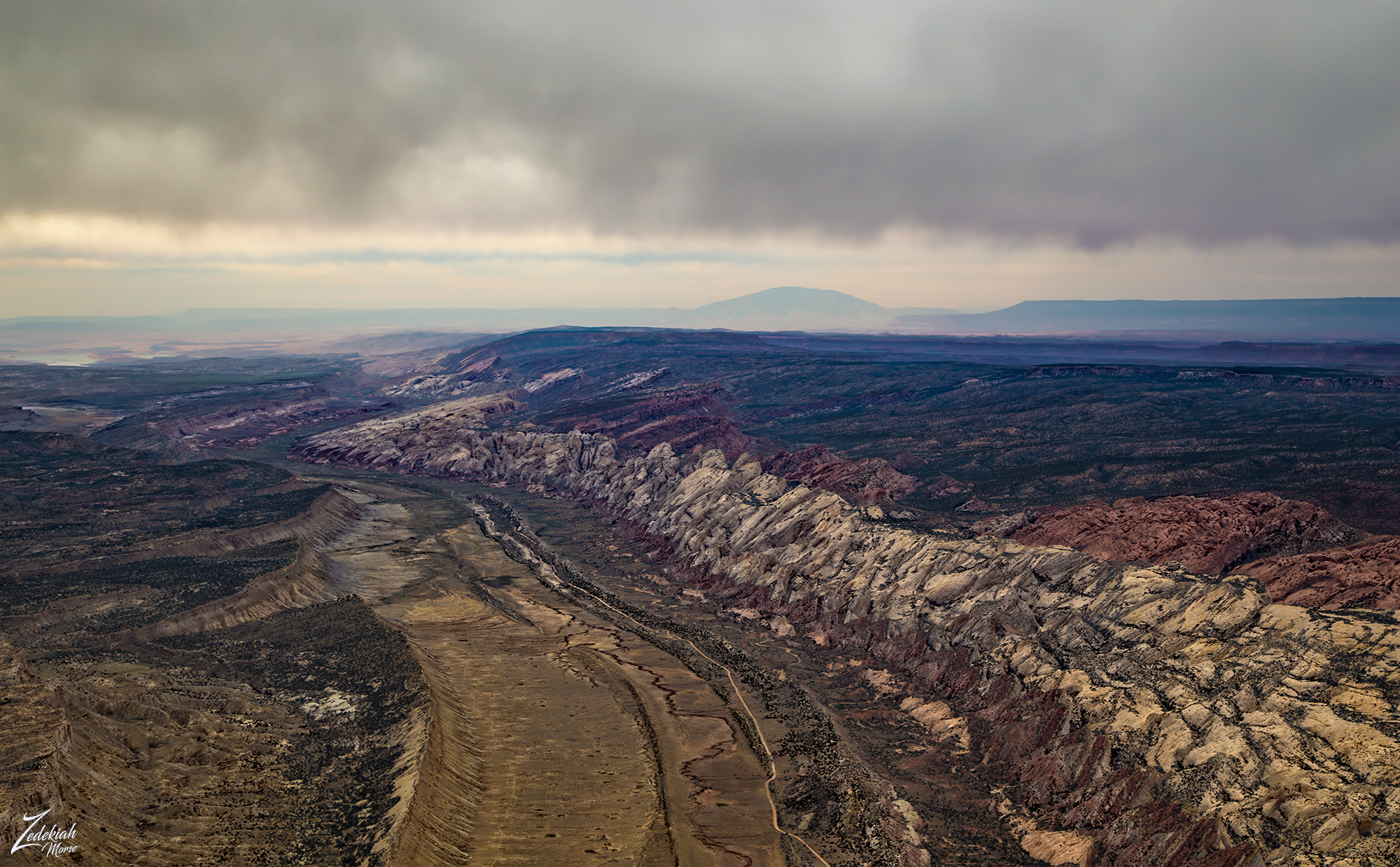 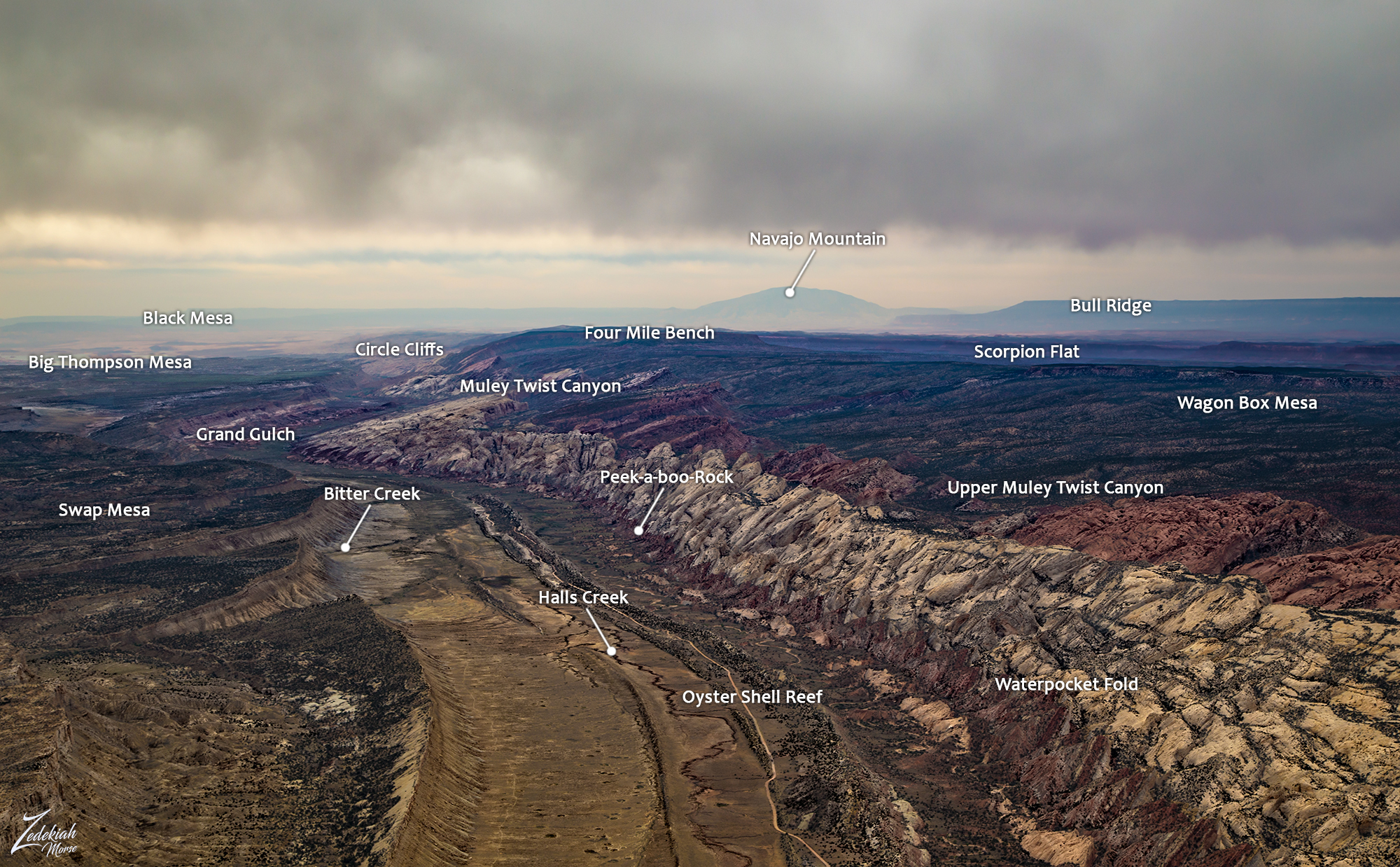 This is the bizarre geologic formation known as Waterpocket Fold. This is located on the border between the Escalante Grand Staircase National Monument (right side of the image) and Glenn Canyon Wilderness (on the left) and Capitol Reef (straight down the middle vertically).

Running down the middle of the gulch in this image are 2 separate creeks, on the left is Bullfrog Creek and on the right is Hall Creek. On the left above the creeks lays Big Tompson Mesa and further to the left just outside this image lies the tiny community of Eggnog. 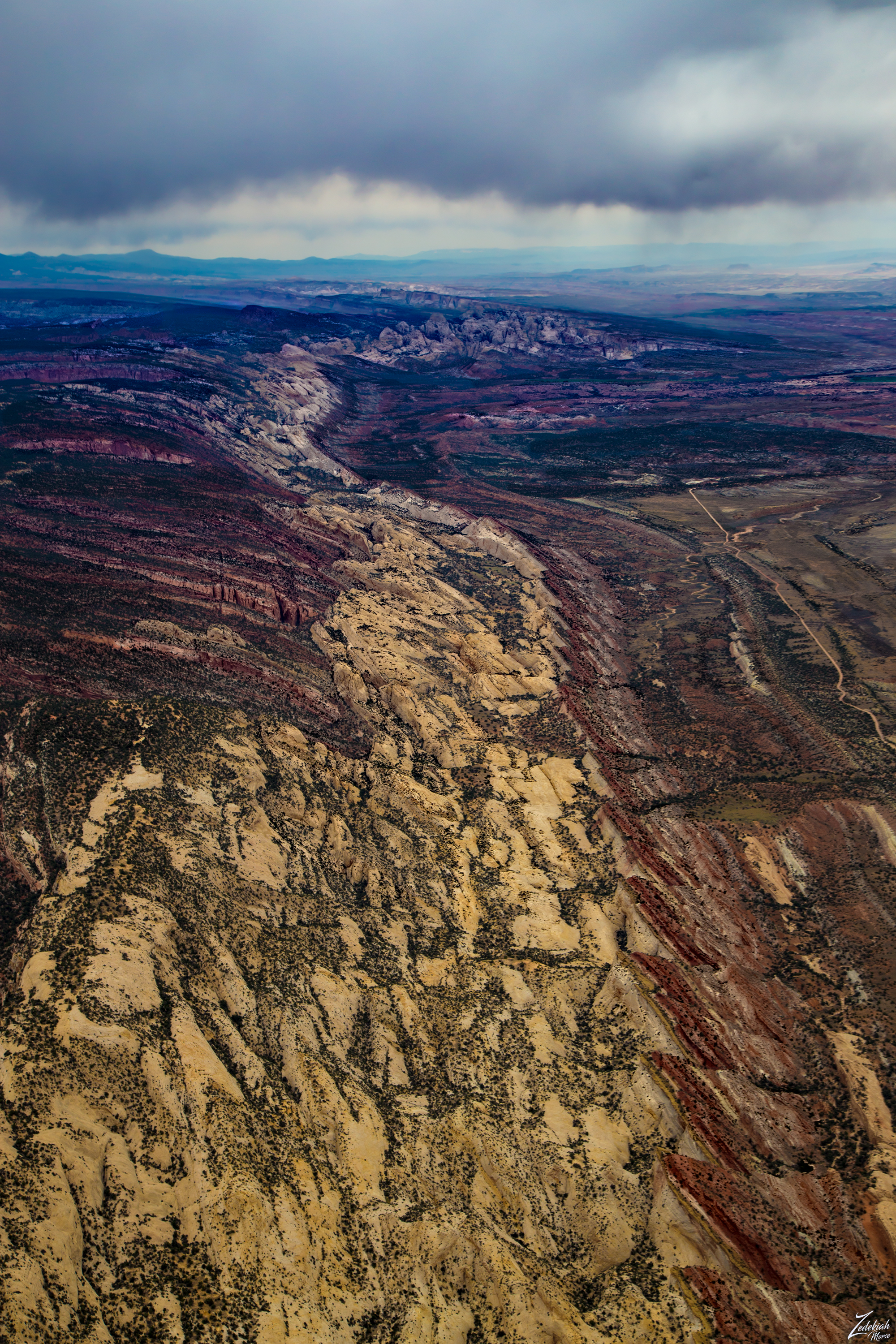 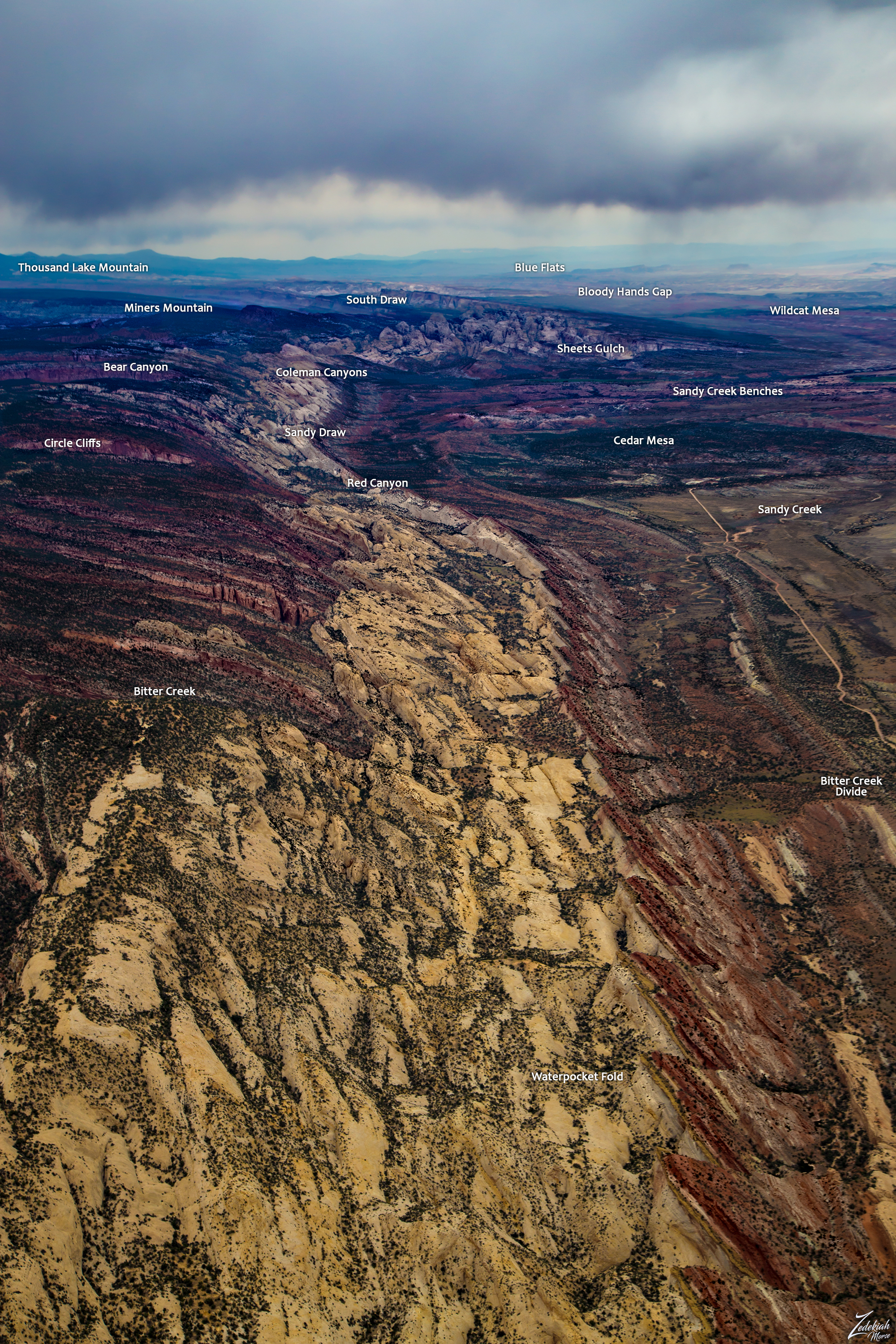 Looking very much like a set of giant geological sharks teeth this image below is a close up of the Waterpocket Fold formation. 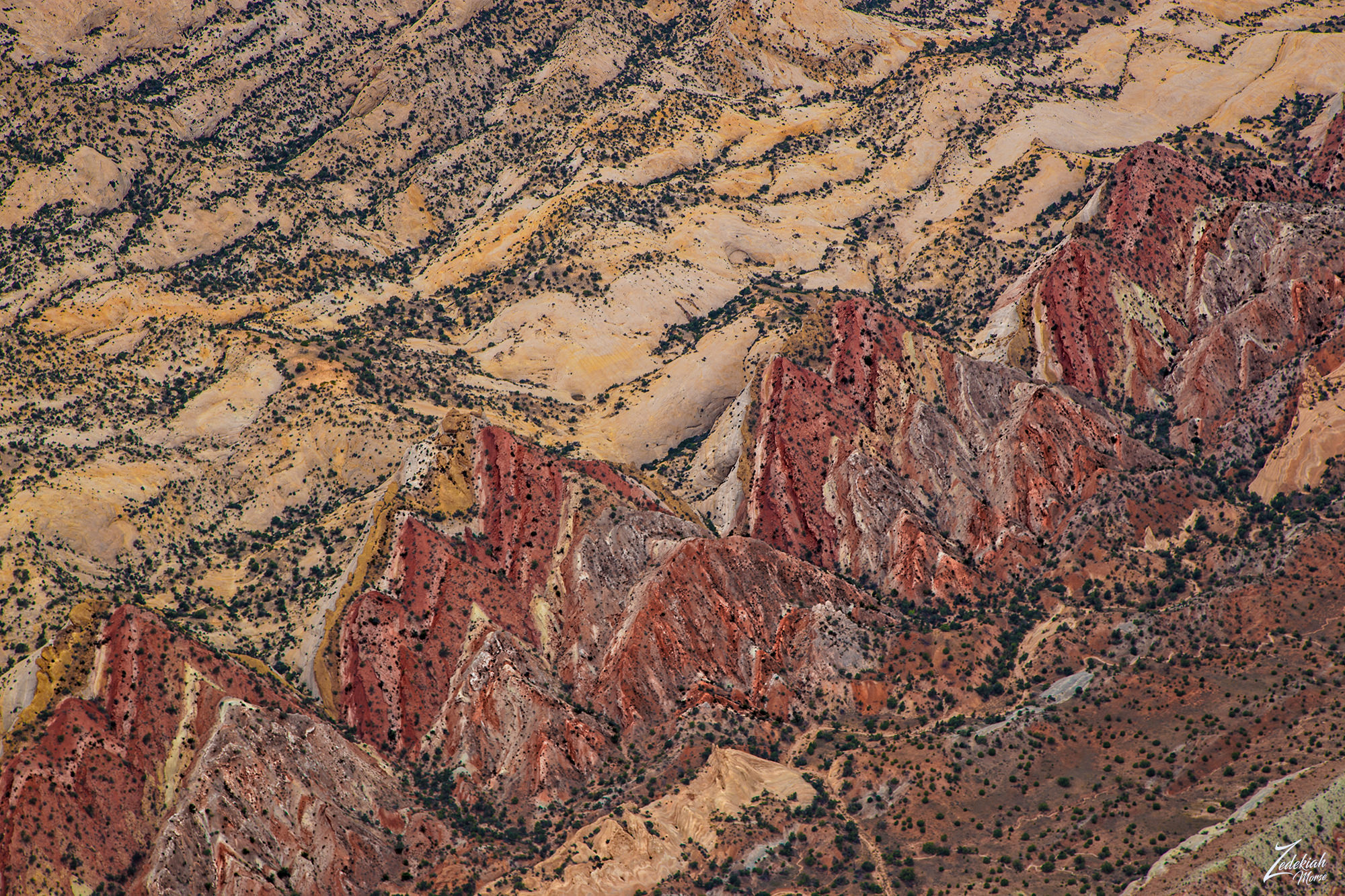 The Waterpocket Fold defines Capitol Reef National Park. A nearly 100-mile long warp in the Earth’s crust, the Waterpocket Fold is a classic monocline, a “step-up” in the rock layers. It formed between 50 and 70 million years ago when a major mountain building event in western North America, the Laramide Orogeny, reactivated an ancient buried fault in this region. Movement along the fault caused the west side to shift upwards relative to the east side. The overlying sedimentary layers were draped above the fault and formed a monocline. The rock layers on the west side of the fold have been lifted more than 7,000 feet (2,134 m) higher than the layers on the east. 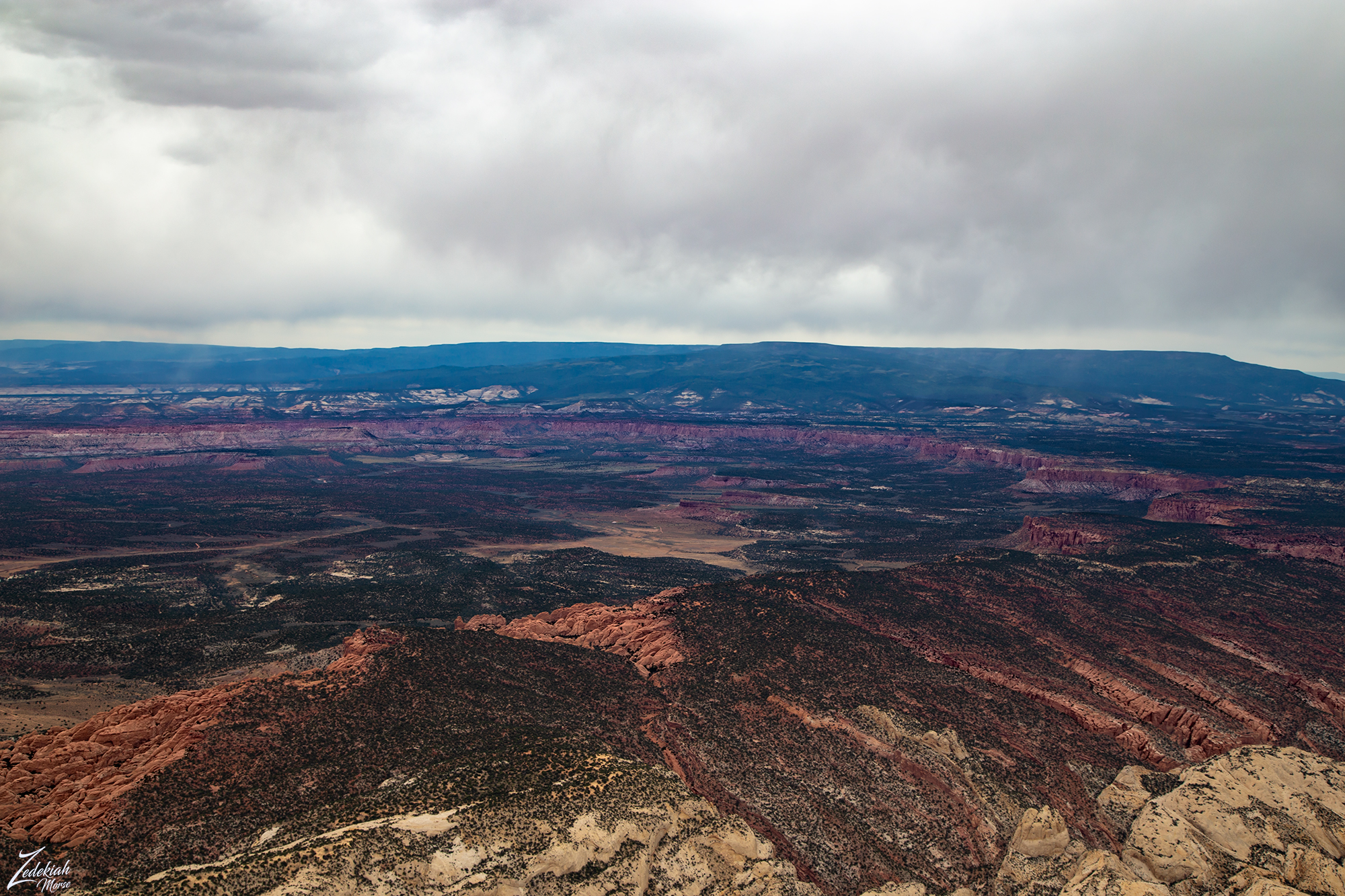 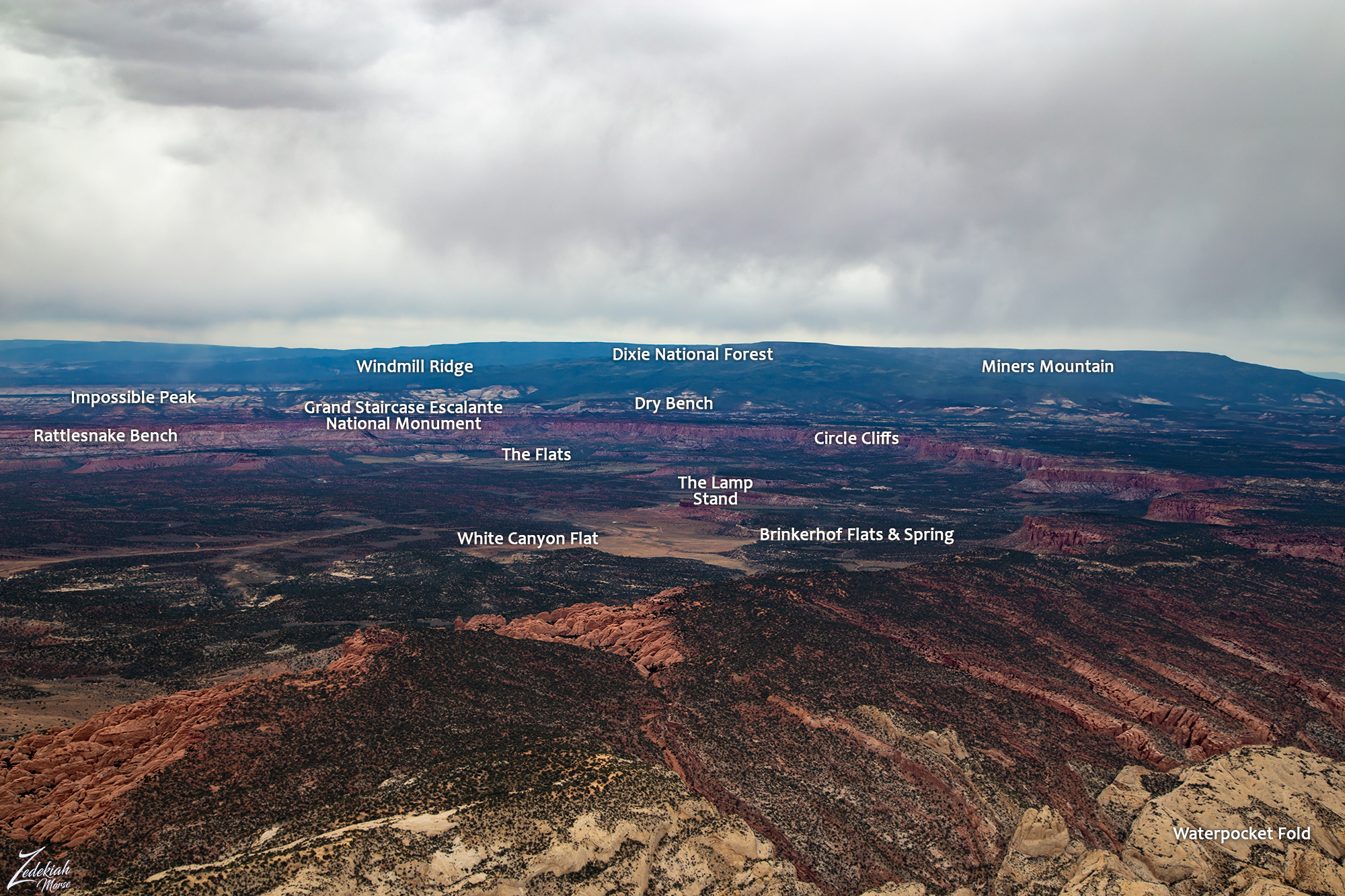 In the image above looking west towards Rattlesnake Bench and Impossible Peak, the vast curvature of the red-hued Circle Cliffs cuts around The Flats, White Canyon Flat and down to Wolverine Bench and Death Hollow. 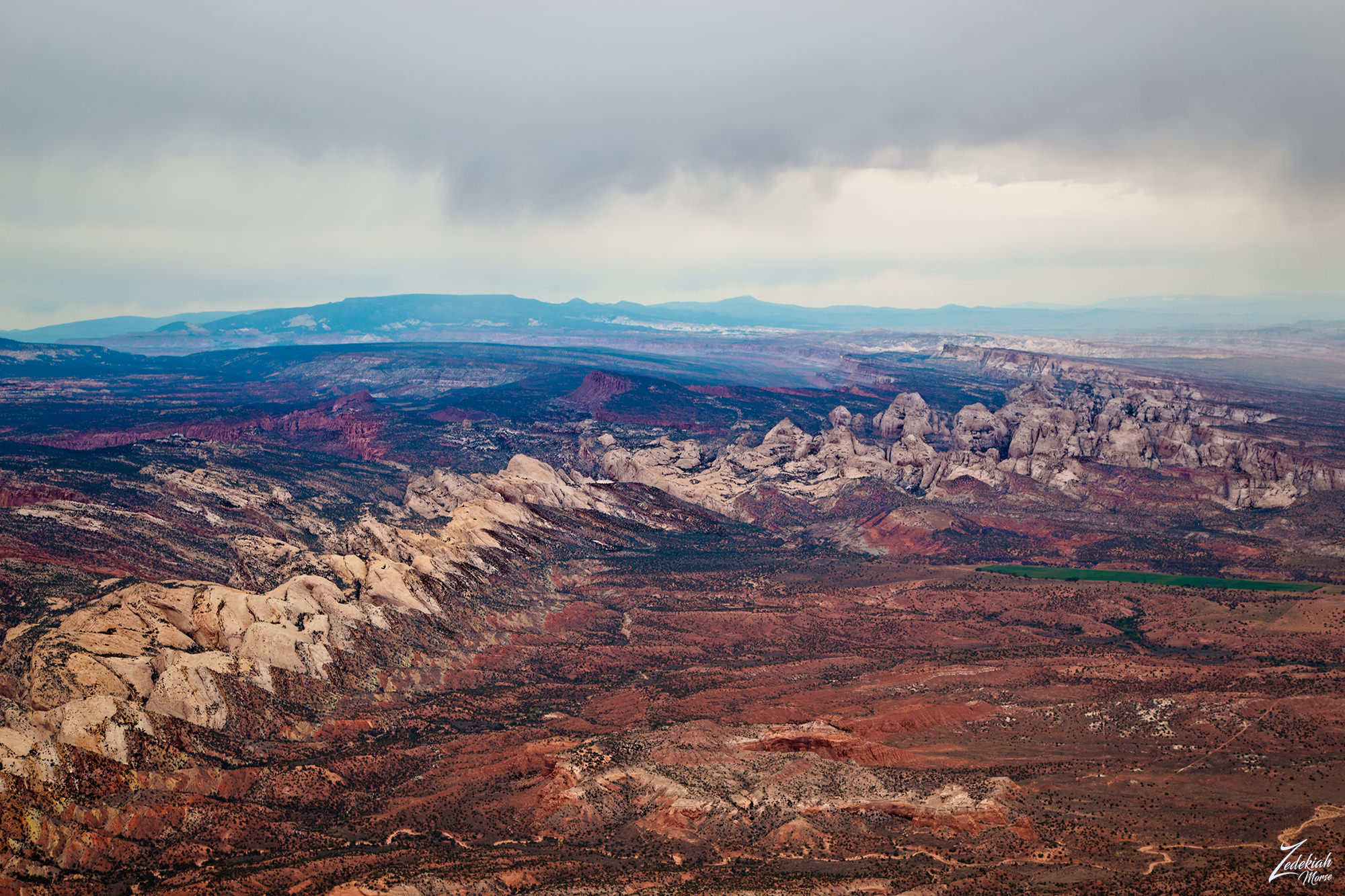 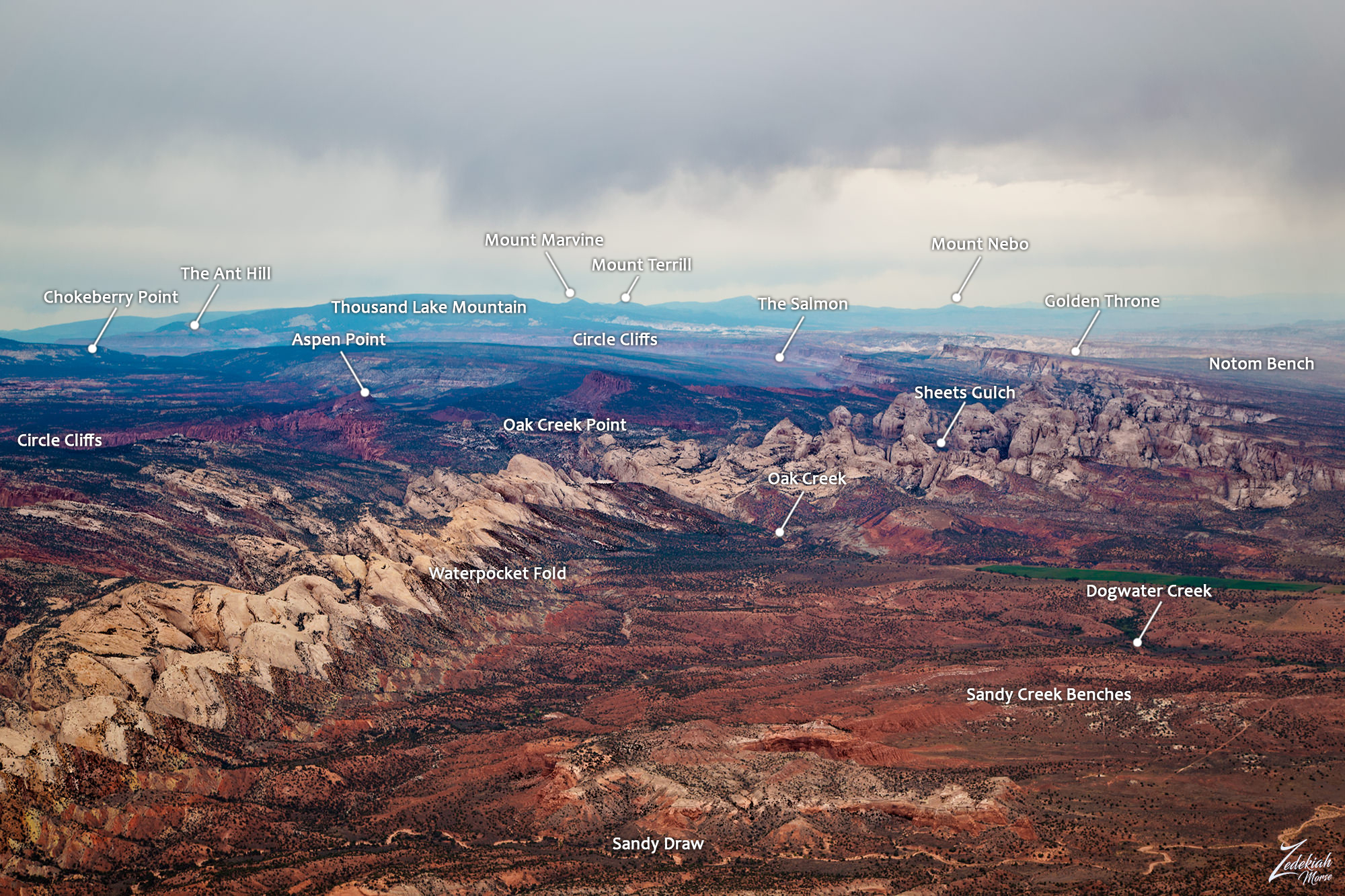 Above, the Waterpocket Fold turns to the east at Sheets Gulch. On the left side of the ridge lies Bear Canyon and Miners Mountain. In the distance on the left is Thousand Lake Mountain in the Fishlake National Forest.

More recent uplift of the entire Colorado Plateau and the resulting erosion has exposed this fold at the surface within the last 15 to 20 million years. The name “Waterpocket Fold” reflects this ongoing erosion of the rock layers. “Waterpockets” are small depressions that form in many of the sandstone layers as they are eroded by water, and are common throughout the fold at Capitol Reef. Erosion of the tilted rock layers continues today forming colorful cliffs, massive domes, soaring spires, stark monoliths, twisting canyons, and graceful arches.

Below, this is looking down onto the top of Sheets Gulch, a narrow slot canyon through the Waterpocket Fold with deep enclosed passageways through the eroded Navajo sandstone. In the middle left side of the Waterpocket Fold lies the Golden Throne, a mountainous domed formation comprised of golden stained Navajo Sandstone, which is unique here because the surrounding sandstone is a cream-hued white or red. 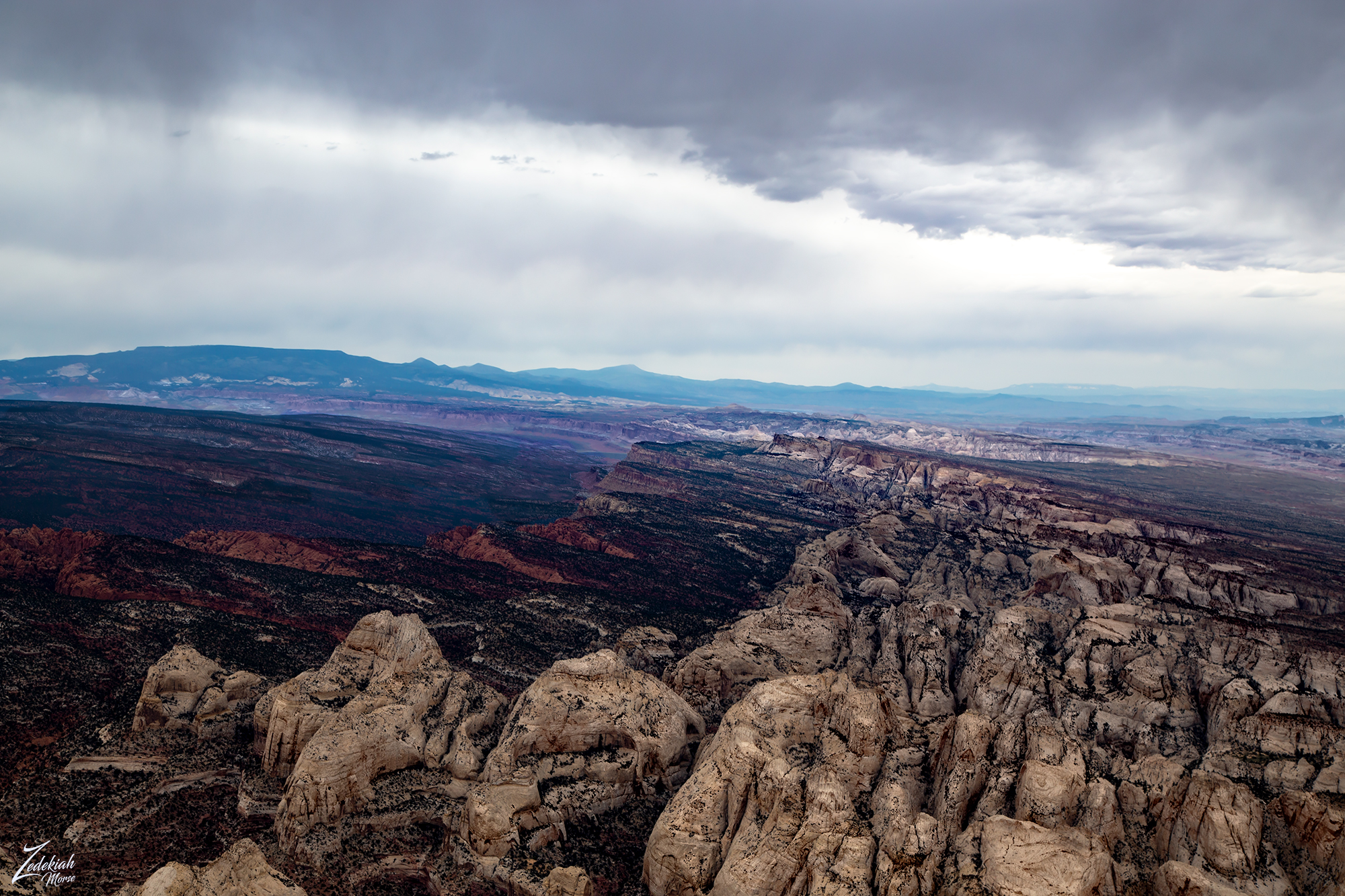 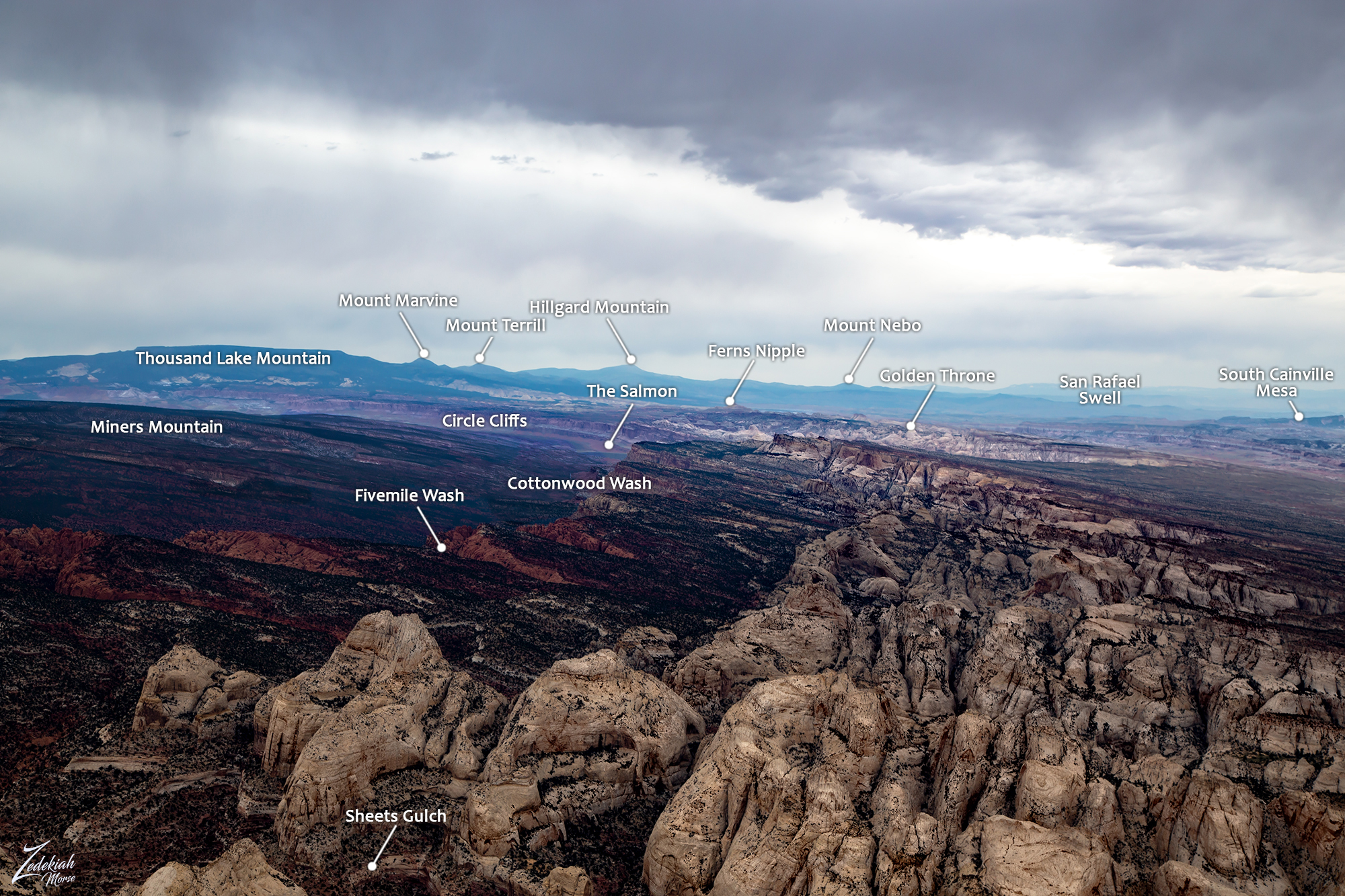 In this image below looking to the northeast across Waterpocket Fold, you can see where the canyon splits off to the east at Wildcat Mesa and the Elbow Of Sandy. To the right of the image lies Tarantula Mesa and across the distance is the San Rafael Desert and to the right; Robbers Roost Flats. 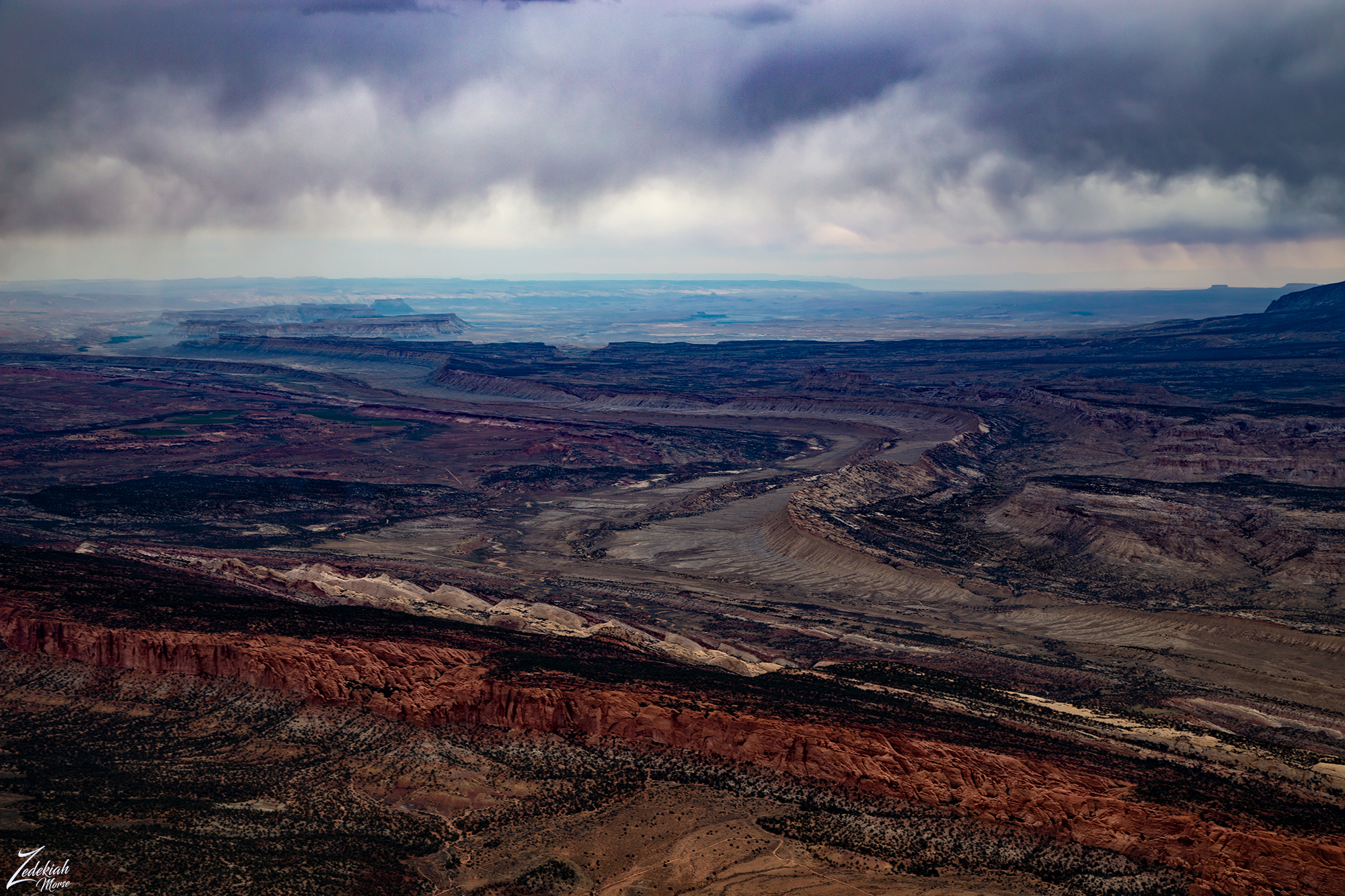 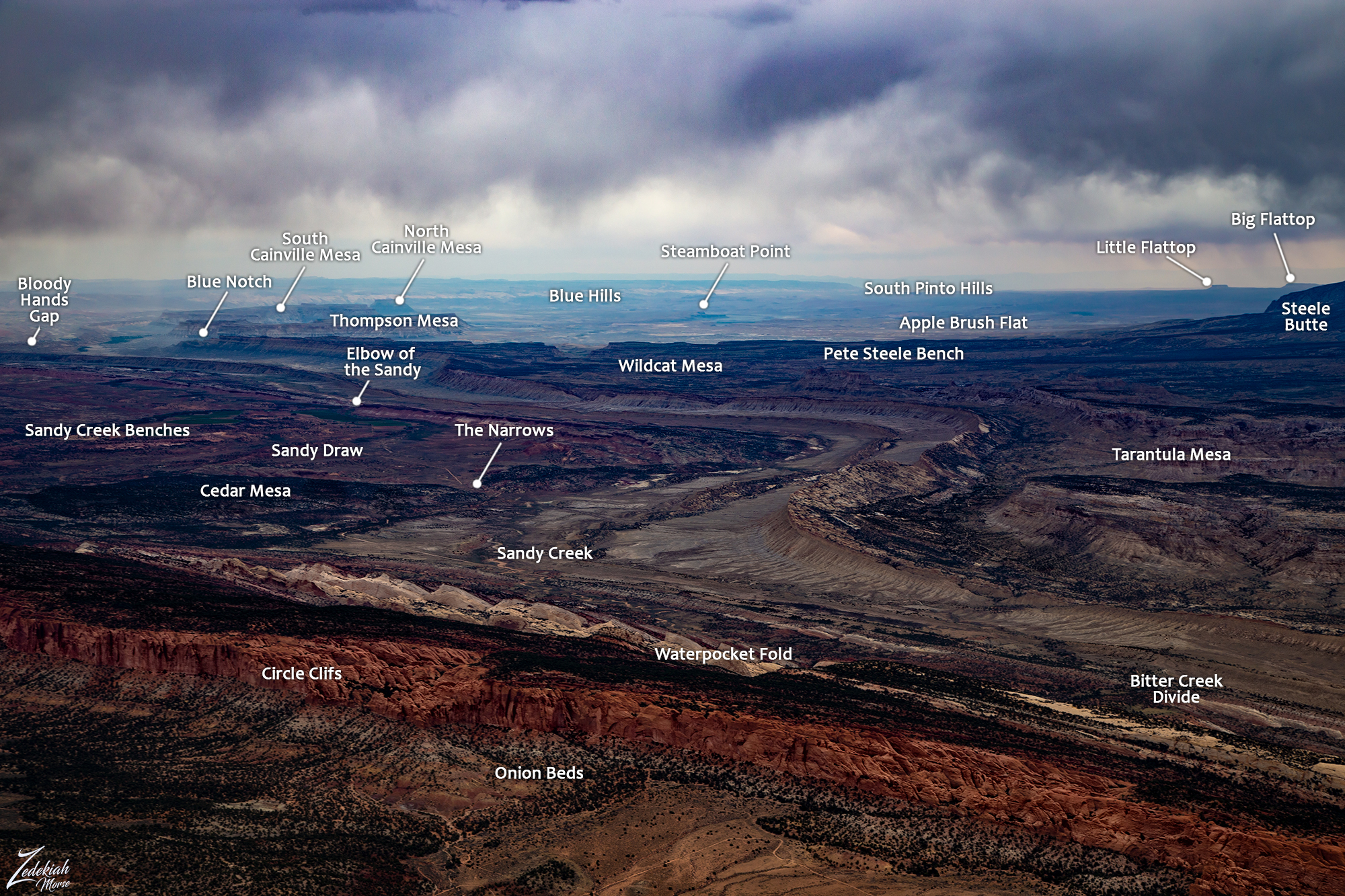