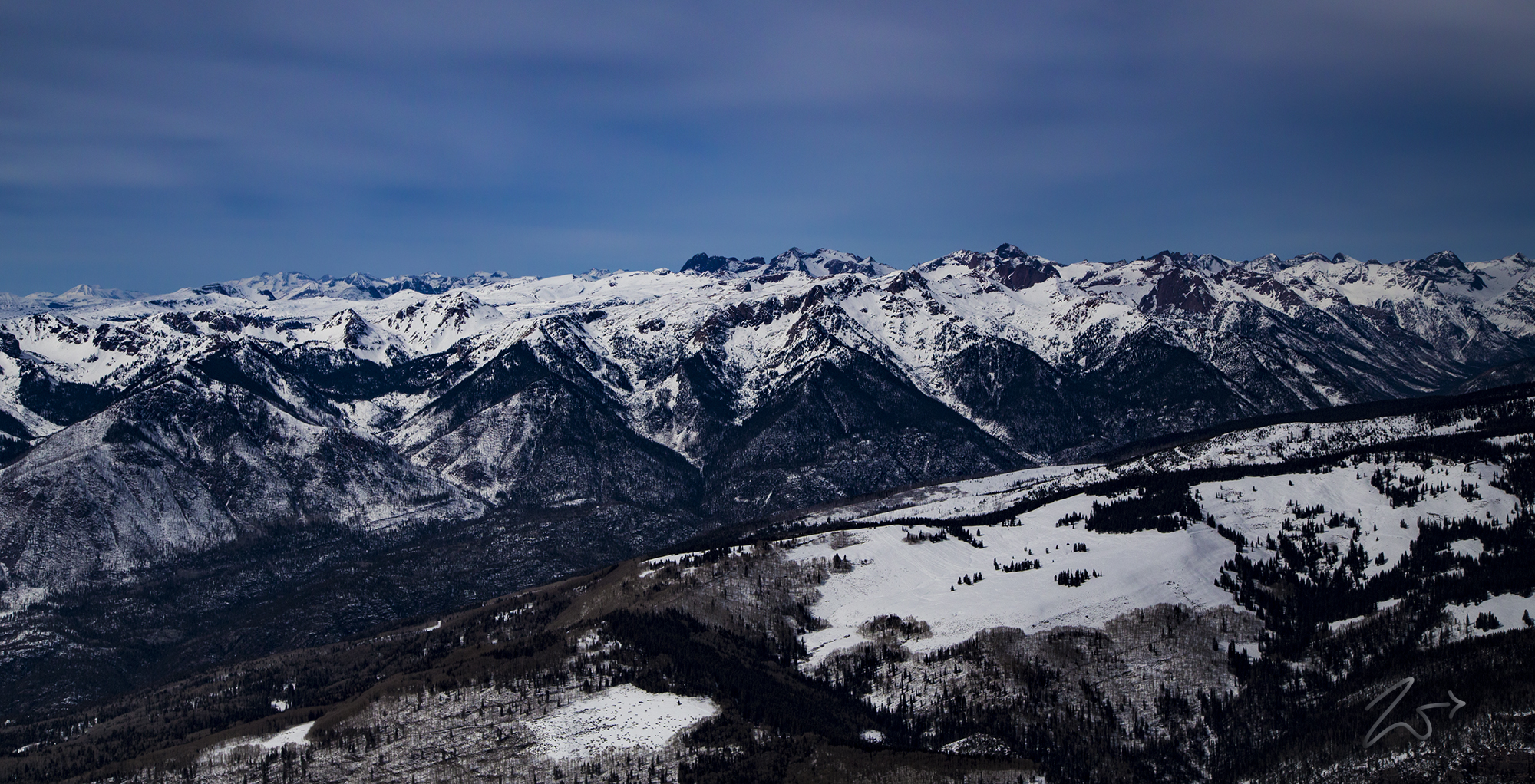 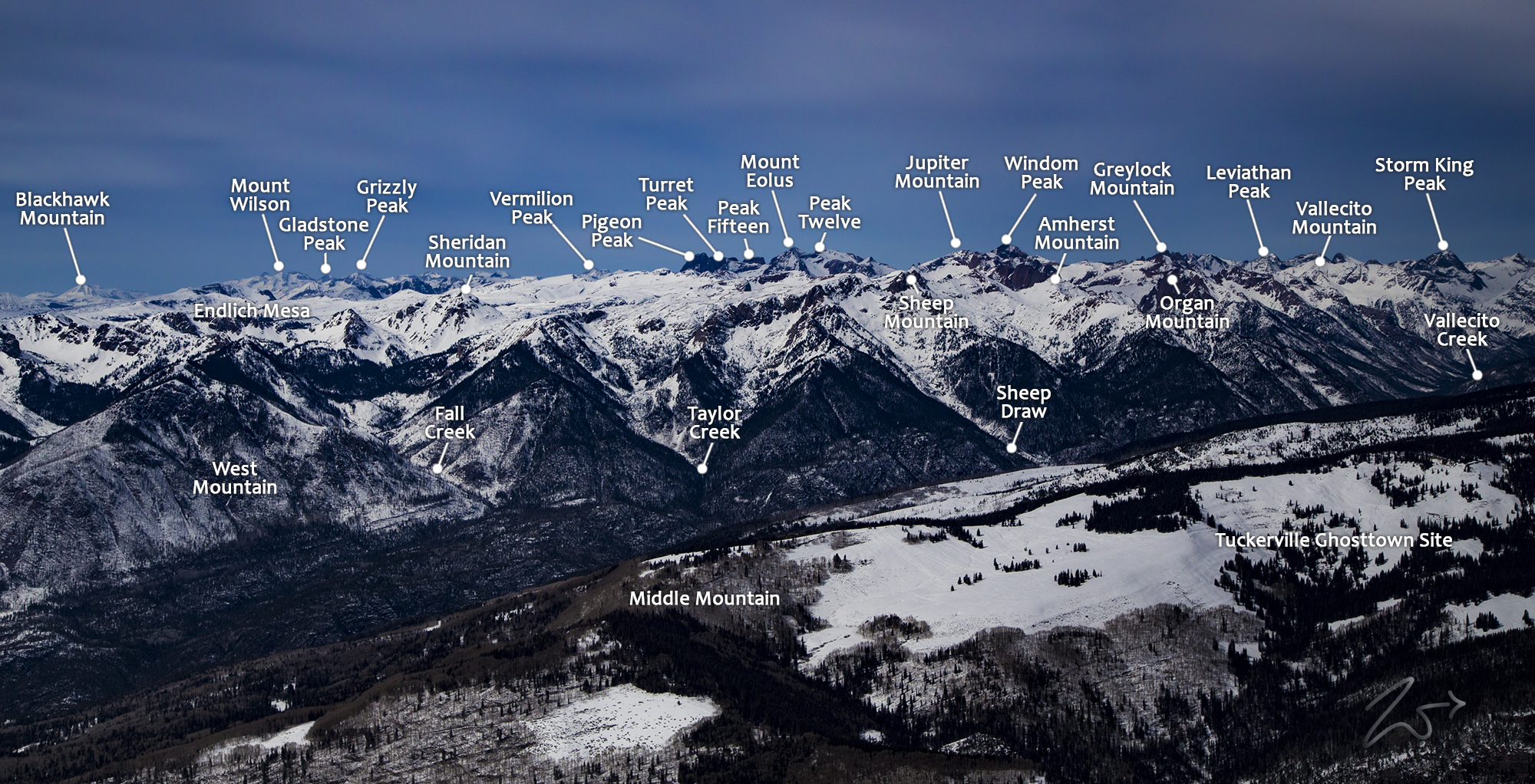 This picture of the Weminuche Wilderness was taken directly above Runlett Peak. The sloping hill in the foreground is Middle Mountain and directly across the valley starting on the left and working to the right is :

Zedekiah: “I took this image flying eastbound towards Alamosa, Colorado. I am shooting northwesterly and yes it was very cold with the window open, especially with the heavy wind buffeting the bushplane as I flew near the mountainside.”

On the ridge in the foreground buried under the snow is the ghost town of Tuckerville, Colorado. The story of how this tiny camp town was founded is rather interesting… Tuckerville was the small mining camp near Vallecito at Cave Basin located on Middle Mountain, in the foreground of this image. In the main mining area at Cave Basin, a five-foot vein of good copper and galena (lead ore) was found.

The Tale of Old Weaselskin’s Goldmine

Somewhere located where Weaselskin Creek empties into Vallecito River, just north of the present Vallecito campground, to the North of the lake, there is a legendary Weaselskin Goldmine that belonged to Old (Jim) Weaselskin (a Ute Indian born 1850) & his extended family. Weaselskin acquired his name from numerous weasel skins he always wore.

Summers would find the Weaselskin family packing and beginning their long hike up the steep trail to Endlich Mesa (high mountain mesa that sets above and to the west of Vallecito River Valley). Endlich Mesa was dotted with tiny lakes, rock formations, random patches of trees and located above the tree line.  Vallecito River Valley settlers named one of Endlich Mesa’s swift-running streams Weaselskin Creek in honor of the Old Indian who used this location as a summer pasture for his horses for many years.

Besides a creek and bridge named after him, Weaselskin’s claim to fame was the legendary Weaselskin Goldmine. The Goldmine was said to have nuggets by the handfuls. Exactly where it was located is unknown.

On their trip to and from the mountains, the Weaselskins & his extended Ute family became well acquainted with the few settlers who lived along the way. They got to know the Charlie Waldner family who owned a ranch far up the Florida (Flo-re-dah) River above the present Lemon Reservoir just over the mountain to the west of Vallecito. Weaselskin often stopped there on his journeys to Durango, and the Waldners fed him a meal in order to cultivate his friendship. At this time the First Nations tribespeople still caused a certain amount of fear in the settlers, and they figured it was safer to be on good terms with them.

For many years the Utes continued to come up to their favorite hunting and herb-gathering spot, but after the settlers started to homestead on the Los Pinos and Vallecito Rivers, things started changing. It became increasingly difficult to get onto their choicest grounds and the Utes gradually lost their freedom to roam at will. Old Weaselskin died during the influenza epidemic in 1918 while living on his land allotment near the Sunnyside Bridge on the Animas River. This was the bridge that was later re-named “Weaselskin Bridge” in his honor.

In the perpetual hunt for Old Weaselskins Goldmine that followed his passing a rush of mining up the Vallecito Valley was in part fueled by the growing legends about his stash of gold in the mountains. A gold rush of sorts began with a gold strike in Cave Basin.

Cave Basin is located on Middle Mountain, in the foreground of this image. In the main-mining area at Cave Basin, is where a five-foot vein of good copper and galena (lead ore) was found, instigating the short-lived community of Tuckerville.

As hard as the miners tried to keep this exciting news undercover, the secret was soon out and hordes of eager men soon followed. Within weeks a mining camp of tents and wooden structures had set up, high on the cold mountain.

Temperatures at this high elevation during the winters fell to -40°f and conditions for the miners were miserable. But a town built up and existed at various stages of a population from 1913 until the mine played out in 1928 and the camp town was abandoned.

In the image below, in the foreground to the right side is Middle Mountain, you can see the old abandoned town roads all along the hillside. Imagine those full of tents and small cabins. This was once a bustling mining town, high in the mountains, harsh conditions with a spectacular view 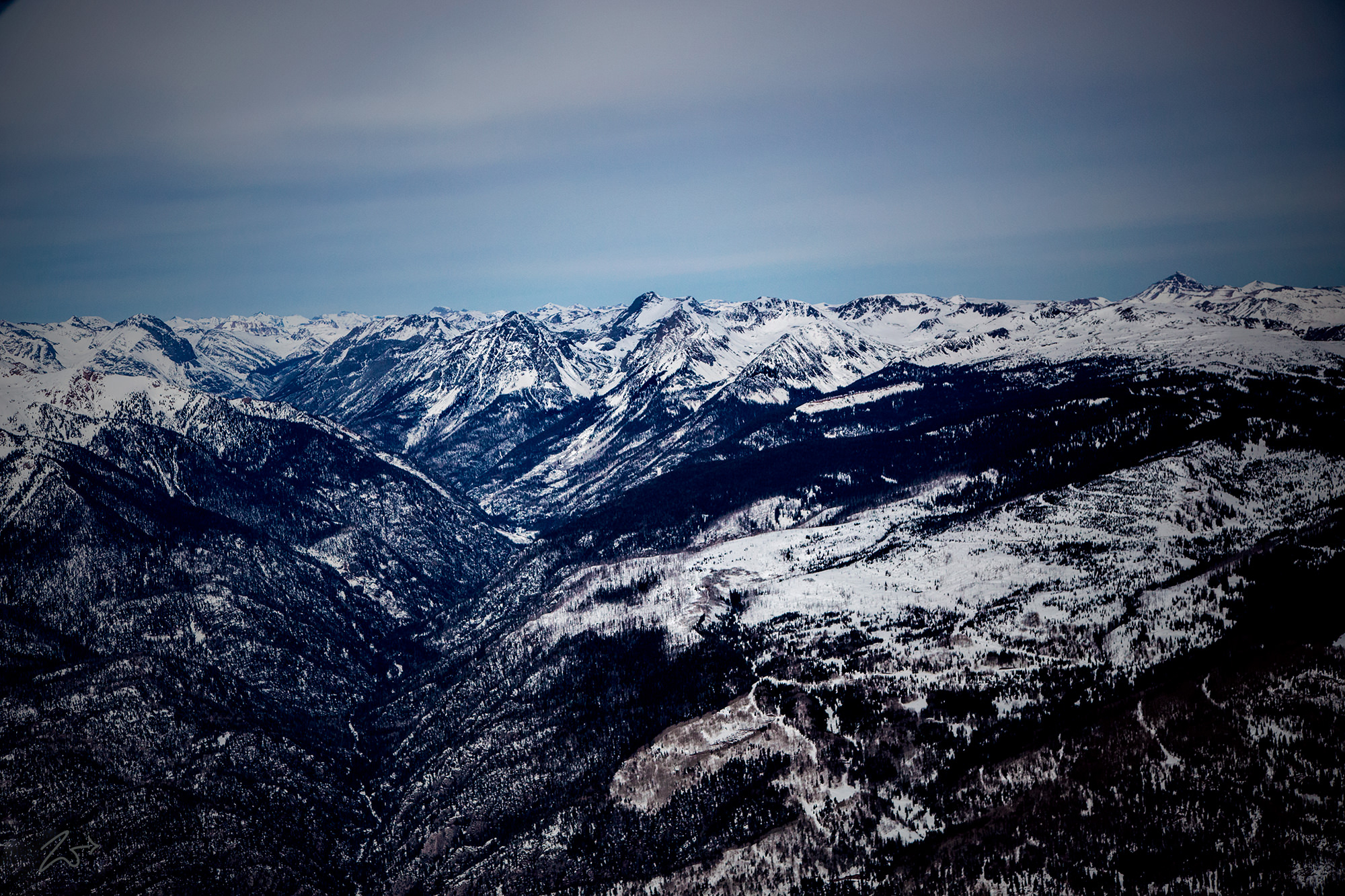 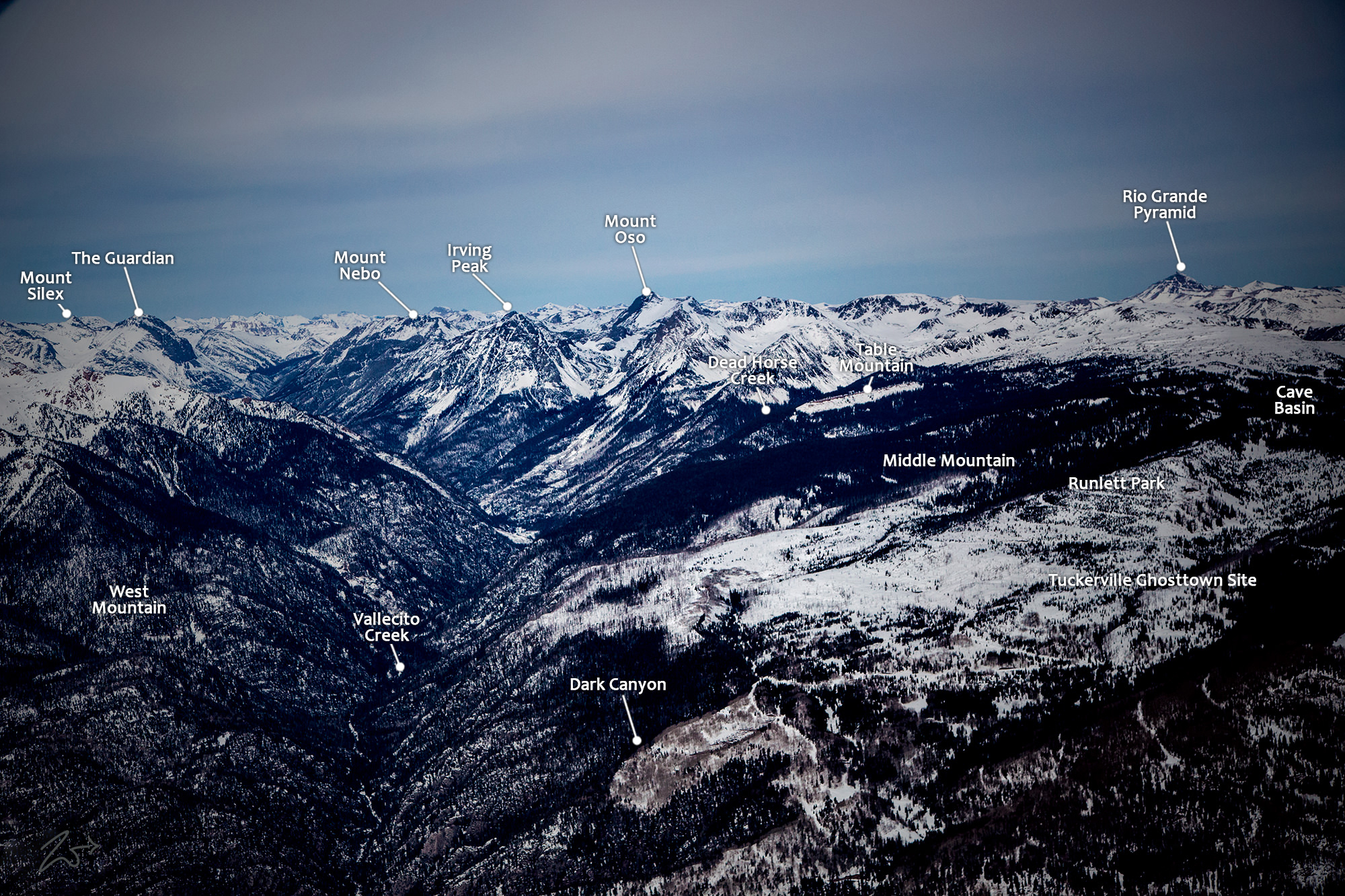 The following is a poster of this location, available via our online Gear store. Click on the image to go to the store and get this informational poster for yourself. Great for home, office or classroom. 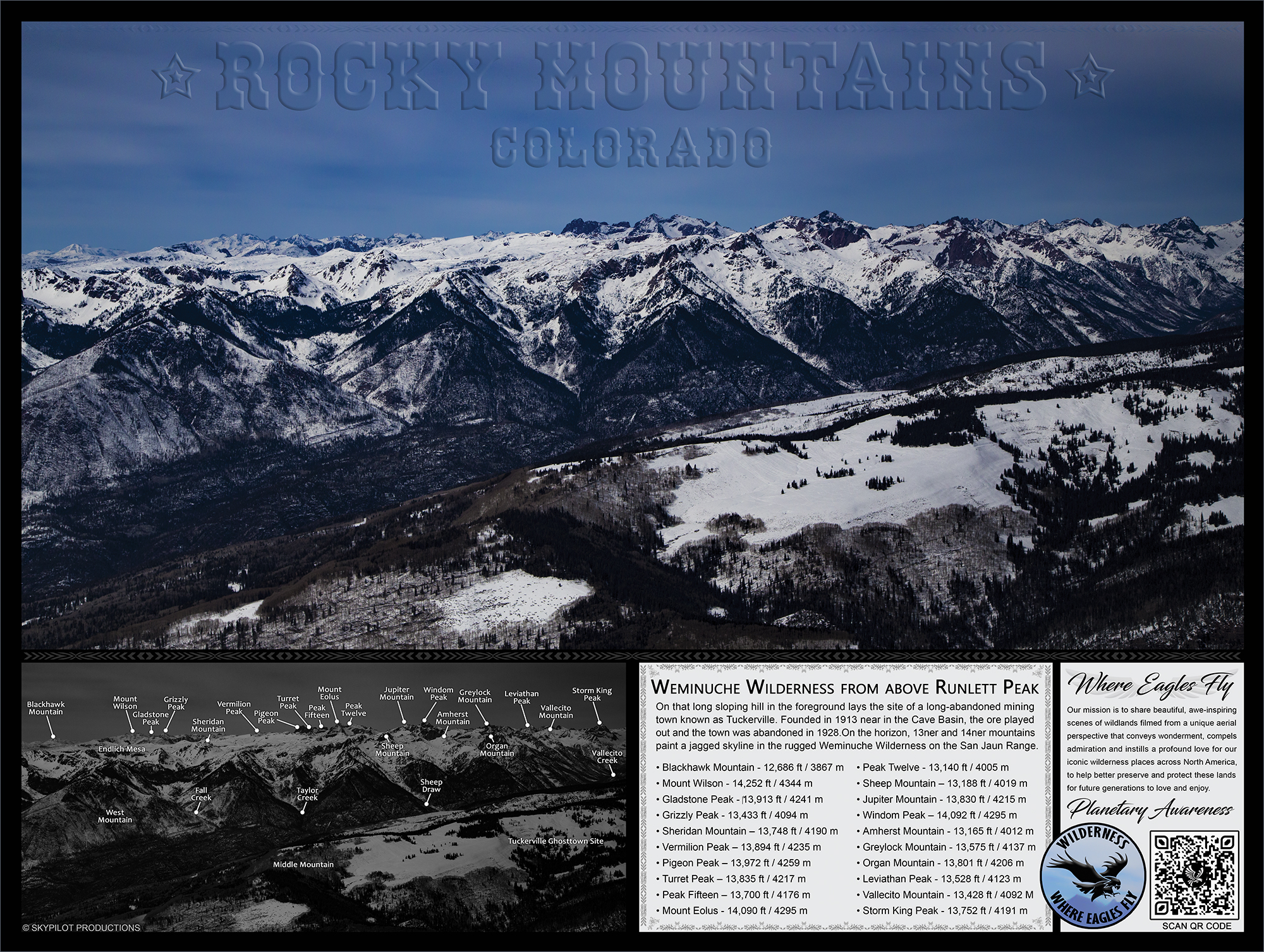