This is an aerial wilderness landscape image showing the wondrous Escalante Grand Staircase National Monument and the beautiful little ranch that sits at the base of Kitchen Corral Point just below the river fork where Deer Spring Wash joins Park Wash coming down from Bryce Canyon National Park. In this image we can clearly see the Vermilion Cliffs in the foreground, if you follow the river from the bottom right you can see where it forks (left and right). The left fork is known as Deer Spring Wash and the right fork is Park Wash.

Zedekiah: “If you follow the river from the lower right side of this image up to the first red cliff ridge-line, below that ridge-line you can see a very small ranch sitting alongside the river next to a dirt road. That ridge is called Kitchen Corral Point, I don’t know anything about the ranch but I have dropped in there a couple of times to see if I could meet them but no one was ever there. If I ever do meet them I will find out more about the ranch and circle back with more information.”

Park Wash flows all the way down through the Cockscomb into Kanab Gulch where it dumps into the Paria River in Buckskin Gulch which then becomes Paria Canyon and falls into Marble Canyon to finally become the Grand Canyon. An interesting fact; this area was the very last place in the Continental United States to be mapped! 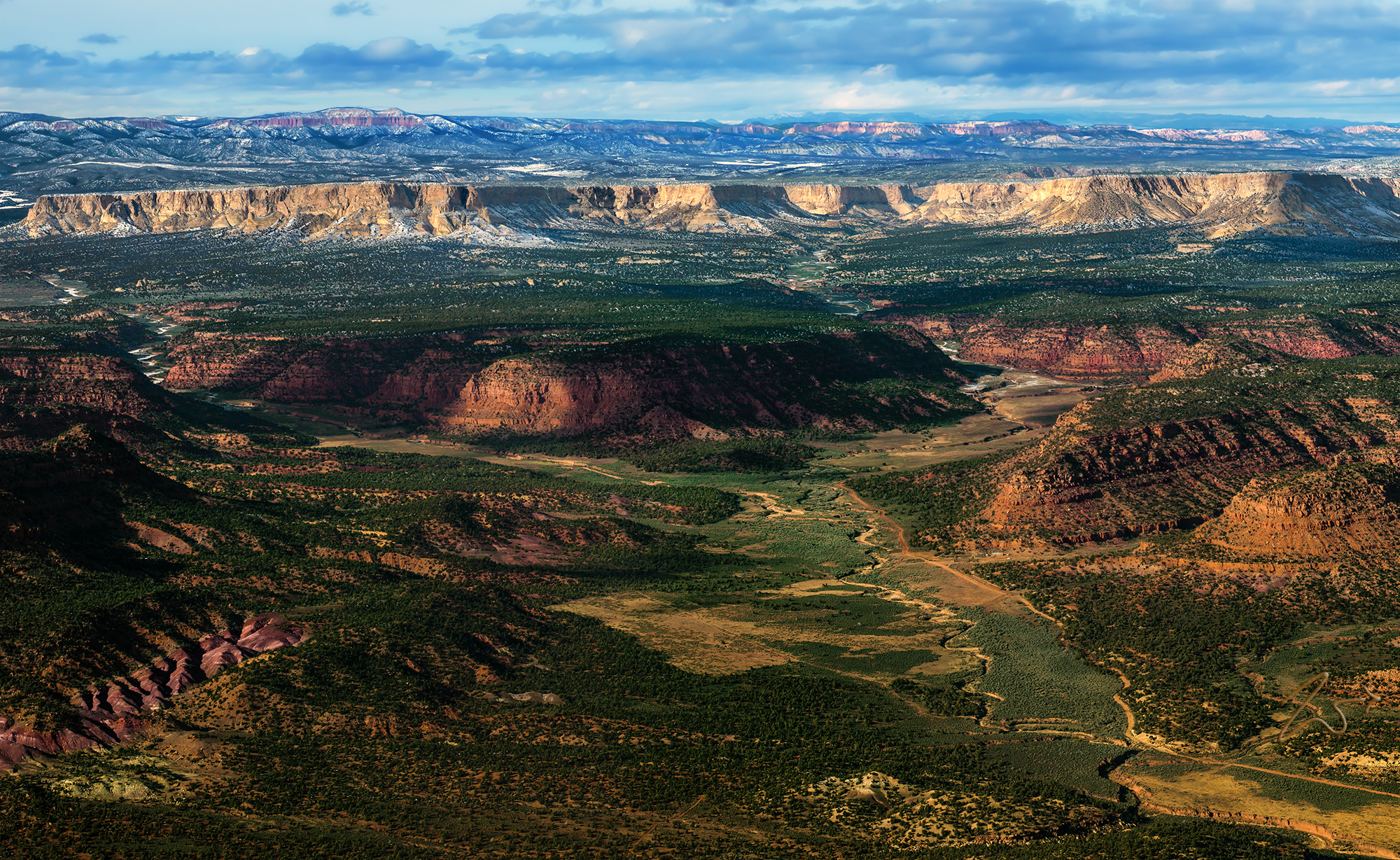 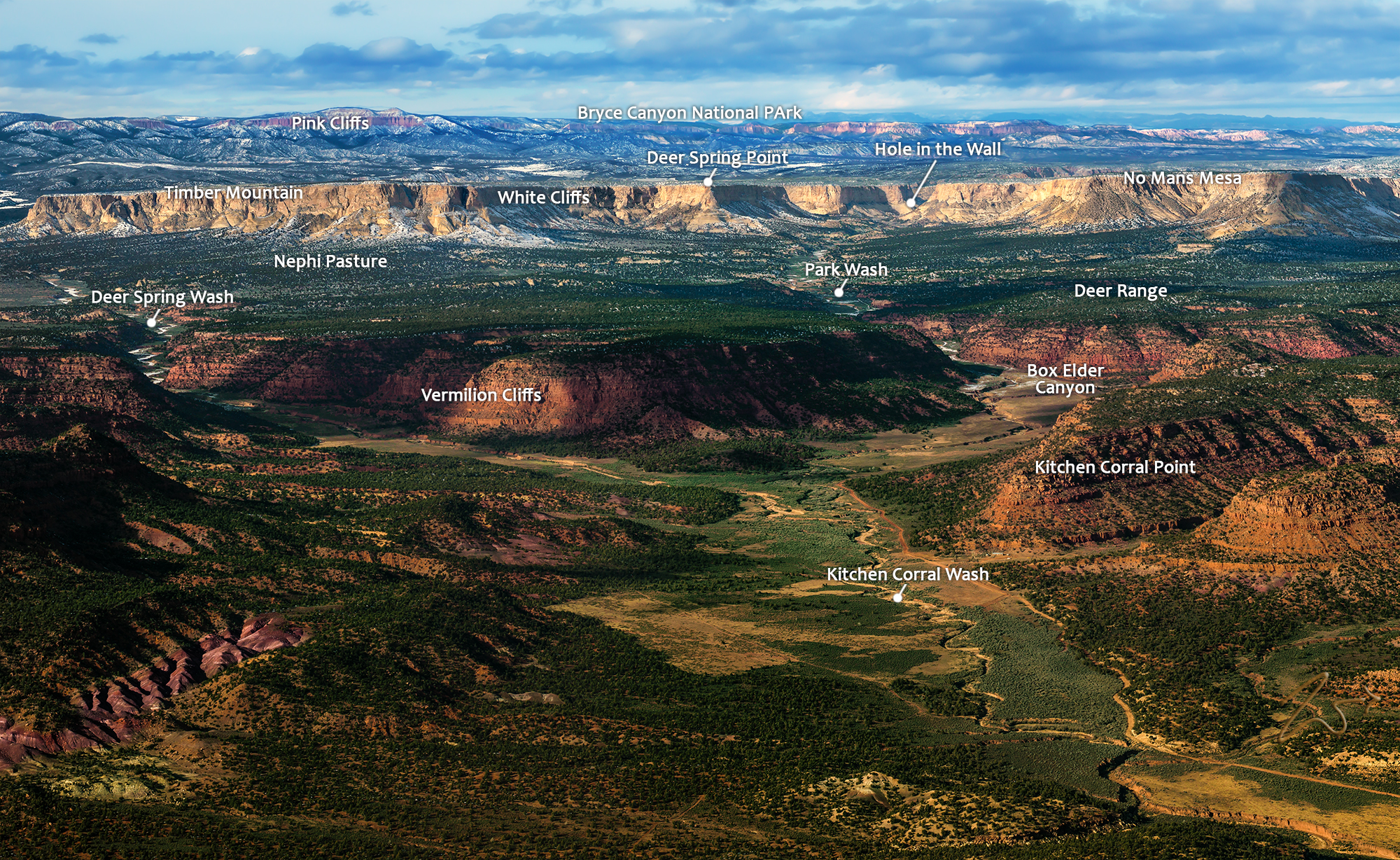 On the right side of the image where the Park Wash River goes around that bend, you can see a large brown flat area along the river. There have been archaeological discoveries here at this spot, based around an ancient Anasazi First Nations Basket-Makers site consisting of a small single dwelling pit-house.

Interestingly the researchers found remains of a man, aged around 60, that were lying on the floor of the pit house where he died or was placed, then over time, his remains were covered along with the remaining site. It is amazing to imagine someone living in this spot so long ago. Also in that same spot sits a small creek from a spring called Corral Spring which provided an additional source of water along with the 2 rivers. It must have been idyllic.

HOLE IN THE WALL HIDEOUT

On this image, If you continue to follow the right fork river called Park Wash, on up around the bend in the image you can see where it goes across the Deer Range and then through a pass in the White Cliffs. The White Cliffs on the right side of that pass are called No Mans Mesa.

This is the infamous “Hole in the Wall” from Butch Cassidy fame. He grew up not far from this very location, over the ridge to the left in this image in the very small community of Circleville, Utah. And since he grew up in this area he would have known it intimately.

According to local legend, Butch used this pass in the White Cliffs (Hole in the wall) as an escape route when eluding the local law officers during his early days as a cattle and horse rustler. While the more infamously known “Hole in the Wall” used by Butch Cassidy, Sundance Kid and the Hole in the Wall Gang is located in remote Wyoming, this one in Utah may have been the place where Butch Cassidy perfected the concept and he continued to use it numerous times throughout his illustriously infamous career.